Chief minister Pinarayi Vijayan is on an ideological high horse to implement the Supreme Court order striking down the restriction on entry of women into the temple. Unrelenting protests may worry the CPI(M) led LDF government. Kavitha Jakkala was provided a police convoy and protective gear as she tried to enter Sabarimala. Credit: PTI

When Kavitha Jakkala, a journalist from Nalgonda, Telangana and Rehna Fatima, a BSNL employee and gender rights activist from Kochi, decided to abort their journey to the Sabarimala Sannidhanam about a 100 meters from the sanctum sanctorum, Kerala breathed a huge sigh of relief.

The situation was volatile, with Hindu groups blocking the passage to the eighteen sacred steps that lead to the Ayyappa deity in a bid to stop the women, despite the Supreme Court striking down the restriction. Both of them agreed to return when the tantri (head priest) of the temple threatened to shut the temple and call off the puja if they enter the shrine.

By then, the government also had taken a political decision to call them back. The minister for Devaswom affairs, Kadakampalli Surendran, said the government is committed to give protection only to devotees and not to activists who come to Sabrimala to “prove a point”, a statement which he later retracted.

At least a hundred policemen were accompanying the two women, one of whom was given protective police gear, during the trek from Pamba to the Sannidhanam, which has effectively become the epitome of the whole issue: the government facilitating women of all ages to enter the temple and the opposition protesting against it. Interesting, both the Congress and BJP leaders are singing the same tune. Rehana Fatima’s house in Kochi was identified and damaged by Hindu groups because she tried to enter Sabarimala temple. Credit: PTI

In a Facebook post, chief minister Pinarayi Vijayan said, “The women devotees who come to see Lord Ayyappa have the right to avail all the facilities there. The police and the government is only doing their duty. The Central government too has issued a directive to maintain law and order in Sabarimala.”

Three women had tried to trek to the shrine before Jakkala and Rehna. Madhavi, an Ayyappa devotee from Andhra Pradesh, was sent back on the first day the shrine was opened for monthly prayers due to violent protests. Libi C.S., an activist and editor of an online portal could not even cross Nilakkal, a base camp near the hill shrine. Suhasini Raj, a New York Times reporter, was forced to turn back a kilometre from the temple when protesters started pelting stones at her.

On October 17, all hell broke lose as protesters attacked people indiscriminately, women journalists being specific targets of their fury. Eight journalists were injured in the protests, forcing police to lathi charge.

At least a hundred policemen were accompanying the two women, one of whom was given protective police gear, during the trek from Pamba to the Sannidhanam.

Sneha Koshy, the NDTV’s Kerala bureau chief, wrote about her experience while she was reporting from the temple. “While I was reporting from a spot 200 metres towards the temple from the Pamba base camp, the protestors surrounded us, and told me that women of my age should not be here. But I had every right to be here after the Supreme Court verdict. As I continued to report amid the shouts and the threats, I didn’t feel intimidated by them at all.

“Then they shifted their attention to the cameraperson, SP Babu, and jostled him into stopping the shoot. But Babu kept the camera live as long as he could. The men blocked the camera and forced us to retreat to the base camp … The car of Republic TV reporter Pooja Prasanna was surrounded by a hundred angry, young men and vandalised; Pooja was attacked with sticks. CNN-News18’s Radhika Ramaswamy was inside her car when the protesting devotees started throwing things at her. She was in tears. Saritha S Balan of The News Minute was pulled out of a bus that was going to Pamba and kicked on her back”, she wrote.

A sixth woman, T.S. Manju, has reached Pamba to visit Sabarimala this afternoon. After a long discussion with the police, she has temporarily been stopped from moving further. Heavy downpour in Sabarimala and Pamba has given police some breathing space, but the security personnel are also in a fix as Manju insists on entering the temple. Inspector General S. Sreejith hinted that her background needs to be verified. Manju, who was a Congress candidate in the 2010 local body elections, allegedly has more than a dozen of FIRs registered against her as a result of her political activities. 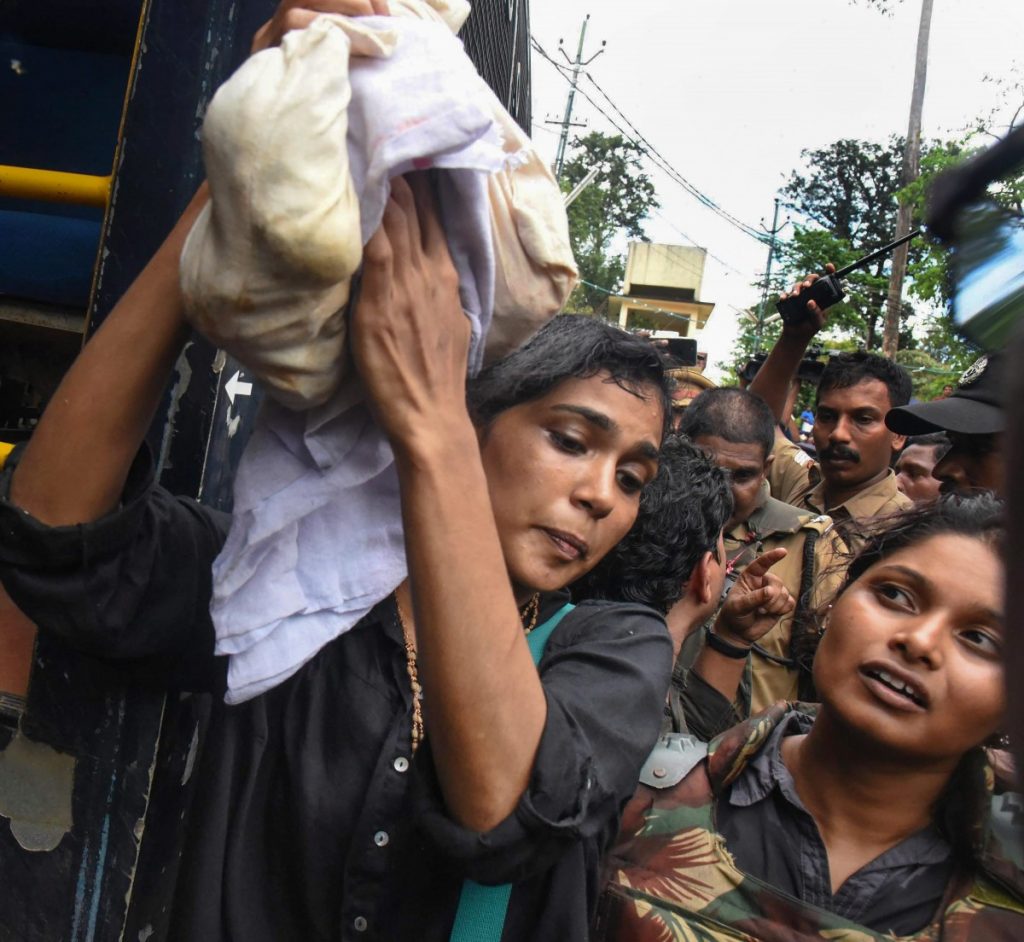 The Rashtriya Swayamsevak Sangh (RSS) was initially in agreement with the Supreme Court’s judgement allowing women of all age to enter Sabarimala. The Hindu nationalist organisation had made its position clear a couple of years ago, when its general secretary Suresh Joshi had said in Rajasthan, “Because of some unfair traditions, at certain places, there has been a lack of consensus on the question of temple entry. Wherever such a problem exists, attempts should be made to bring about a change of mind through proper discussion.”

However, four days after the verdict, the RSS took a complete U-turn. Joshi came down heavily on the state government for “hastily implementing” the order. In a statement issued on October 3, Joshi said devotees, especially women, are protesting against the “forceful breaking of tradition”.

Also Read: Sabarimala Temple: Even If Tradition Has to Be Respected, Norms Change

By this time, the BJP had already seized the opportunity to polarise the Kerala polity to its advantage, taking over the protest started by Hindu organisations.

The aggressive right-wing agenda suffered a setback only when Dalit and OBC organisations distanced themselves from the protests. Bharath Dharma Jana Sena BDJS), the political face of the SNDP Yogam, which represents the OBC and Ezhava communities, made it clear that their cadre would not be taking part in the agitation, making it an exclusive upper caste affair.

The aggressive right-wing agenda suffered a setback only when Dalit and OBC organisations distanced themselves from the protests.

The Kerala Pulayar Maha Sabha (KPMS), the most prominent Dalit organisation in the state, extended support to the government in implementing the Supreme Court verdict. Tribal leader C.K. Janu, who had been part of the NDA since 2014, snapped ties.

Sunny M. Kapikkad, a Dalit intellectual, said the agitation was a “neo-Brahmanic movement” that challenged the essence and process of the renaissance movement that had taken place in Kerala. “Those who believe in the morality of the constitution of India are committed to follow the judgment, which is based on the principle of equality. Constitutional morality and social morality have come face to face in Sabarimala. The Supreme Court judgment is not based on the number of people who support customary practices, but on justice,” he said. 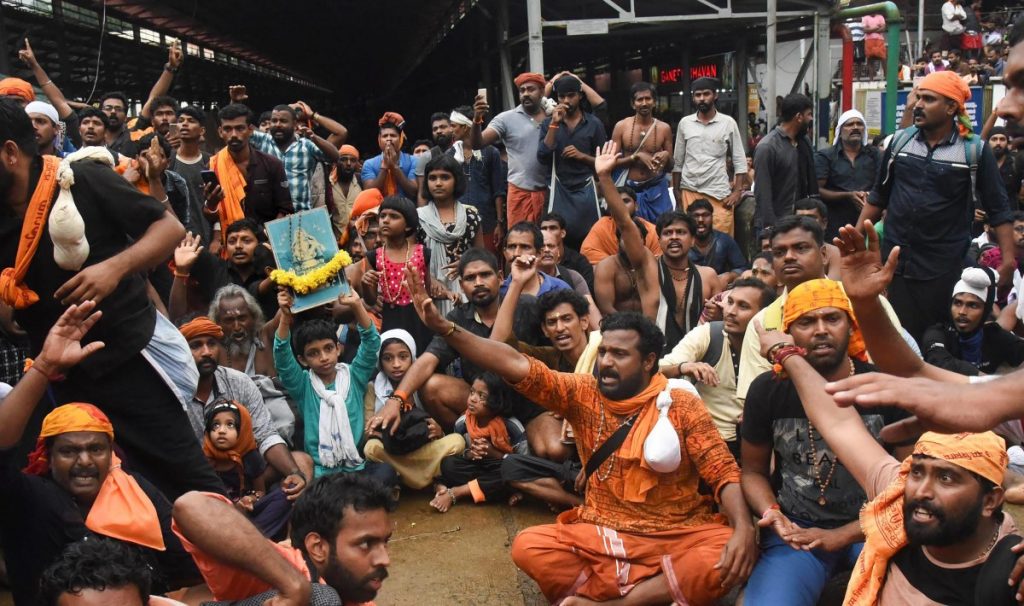 He said through the renaissance movement, the state, once dubbed as a “lunatic asylum” by Swami Vivekananda, had transformed itself into a model for the entire country. “In our own history, some sections always opposed social reform movements. They were not only conservative elites, but also the sections which benefitted also had to be persuaded using beliefs and customary practices.”

Vijayan called out both the Congress and Muslim League, which were on the same page as the BJP and Sangh parivar on the issue. “If you place faith higher than even the constitution, you would end up constructing the Ram temple in Ayodhya. Haven’t you realised the folly of aligning with the BJP in this issue?” he asked the IUML in particular. “The BJP has its agenda set not just on Ayodhya, but on many other places in the country. If everything is to be based on faith, just imagine what our future would be,” he said.

The Congress-led UDF, is wary of the BJP eating into its Hindu votes. Congress leaders squarely blamed the Left parties for changing the state government’s stand, which was in tune with the Hindu outfits when the UDF was in power. In its affidavit before the SC, the V.S. Achuthanandan-led Left government had taken a stance in favour of women entry in 2007. It was overturned by the UDF in 2011, which placed a fresh affidavit opposing women’s entry. A third affidavit was placed by the current LDF government, following which the SC issued its verdict.

AICC general secretary and former chief minister Oommen Chandy, in a letter to the CM, pointed out that the SC order has caused major concerns among the devotees. “The adamant stance taken by the CPI (M) and the chief minister has put the state in a spot of bother. This government is inviting trouble,” said Chandy.

Leader of the opposition Ramesh Chennithala and PCC president Mullappally Ramachandran voiced concerns against the apex court order immediately after it was pronounced. “Centuries-old practices and rituals that are followed at Sabarimala temple must be protected. The Devaswom board has failed in its duty to do carry out its functions correctly and the state government is in a rush to implement measures without considering the option of bringing an ordinance. The duty of the Devaswom Board is to protect the interests and well being of the devotees, not that of Pinarayi Vijayan,” said Chennithala.

Vijayan called out both the Congress and Muslim League, which were on the same page as the BJP and Sangh parivar on the issue.

KPCC working president K. Sudhakaran, who landed in hot soup when he called menstruation as ‘impurity’, lambasted police who baton charged the Sangh parivar agitators. The BJP’s Facebook page hailed Sudhakaran as a “proud Hindu” who took on Vijayan’s Police.

Poet and editor K. Satchidanandan called the agitation “vote bank politics” and said the Congress in Kerala is helping the right-wing instead of fighting them. He criticised the BJP for initially supporting the right of women to enter the temple, but now backing protests opposing the judgment.

“History is kind to Kerala. At this time of communal polarisation, can’t think of anyone other than Pinarayi to lead it. Idea of Kerala is safe with him,” tweeted author and former civil service officer N.S. Madhavan. 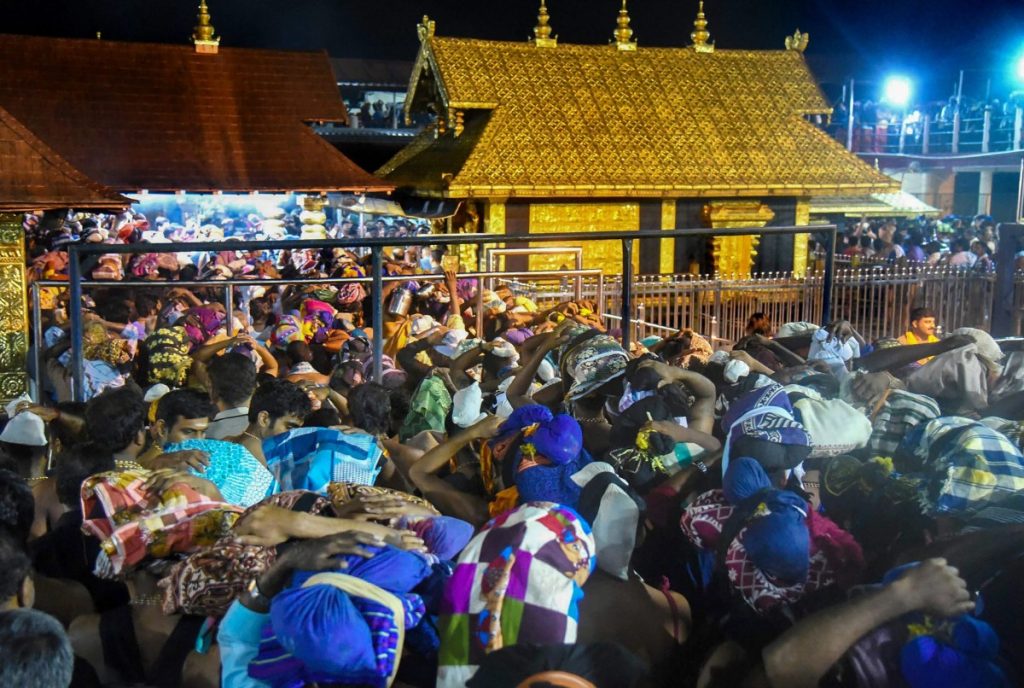 Vijayan tough stance might have won him accolades from the intelligentsia, but some organisations are clearly spooked. The Nair Service Society (NSS), which had a cordial relationship with the LDF government, has criticised both the government and the CM in particular. “The Government is trying to impose their atheist ideology on the devotees,” said G. Sukumaran Nair, NSS general secretary.

CPI (M) will hope that the Sabarimala agitation does not pave the way for the Sangh parivar to join hands with the NSS.

The upper caste polity, which is traditionally not the LDF’s forte, has further mobilised against the government thanks to the RSS and Sangh’s agitation. The hostility of the upper castes was evident from a video in which an elderly lady showered swear words on Vijayan, evoking his caste location. The rise of upper caste leaders of the likes of Rahul Easwar, who is the grandson of the late head priest of Sabarimala, is yet another sign of this phenomenon. Easwar, along with Hindu hardline leader Pratheesh Viswanathan, has been remanded for charges of inciting communal violence.

The unexpected demise of IUML leader and Manjeswaram MLA P.B. Abdul Rassaq on Saturday is going to provide a litmus for all players in the fray.

In the Manjaswaram by poll, BJP leader K. Surendran was agonisingly close to snatching the victory and lost by just 89 votes. The BJP will sense an opportunity to double its tally in the state. With the IUML and Congress on the same side as the BJP, the CPI (M) will have to bank on its ideological credentials during the by election, which could prove to be a game changer in the state’s history.