Sabarimala Verdict: A Godsend for the Hindutva Brigade

The decision to allow the entry of women of all ages in Sabarimala has come as the perfect handle to reignite the regressive religious campaign that the RSS-BJP cohort has been pushing for decades in the last Left bastion in the country. 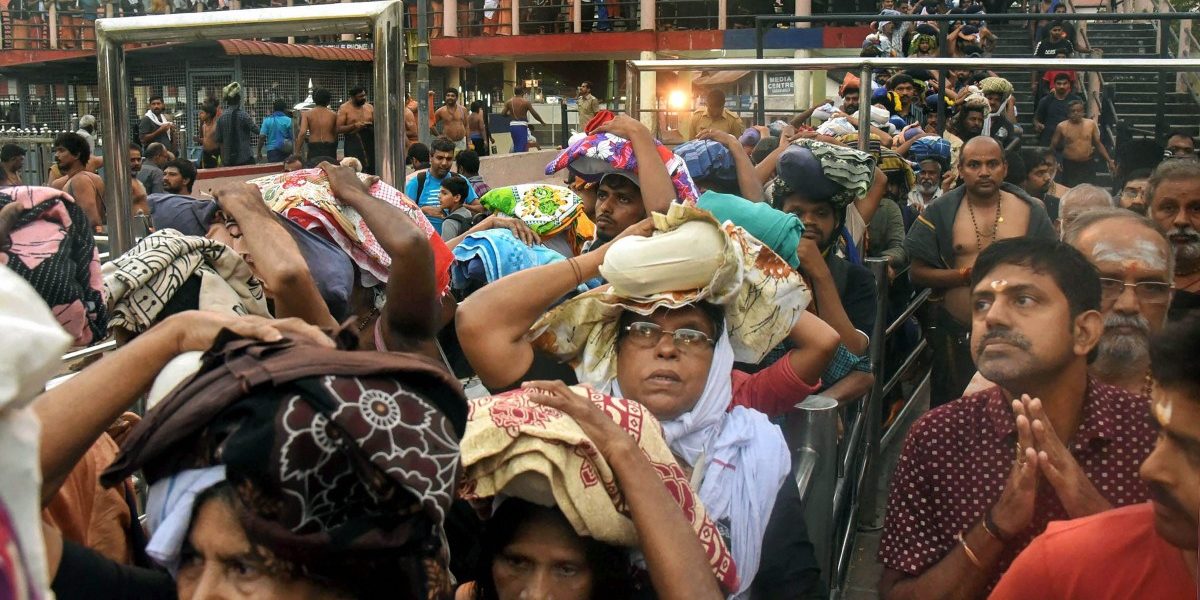 Kerala is under siege like never before in its volatile history. As the state struggles to get back on its feet after the worst floods in a century, it is convulsed in a violent religious campaign that belongs to another time and place. For the saffron brigade, the Supreme Court’s decision to allow the entry of women of all ages into the hilltop temple of Ayyappan in Sabarimala has come as a godsend, the perfect handle to reignite the regressive religious campaign that the RSS-BJP cohort has been pushing for decades in the last Left bastion in the country.

In just three weeks after the SC judgement, Kerala has been reduced to a violent, seething mass of agitators seeking to preserve the status quo at a forest-bound temple that debars women between 10 and 50 years from entering its precincts. From Pandalam, seat of the erstwhile royal family which claims a kinship with the deity, to Kochi and Thiruvananthapuram, thousands of protesting women, organised by the hydra-headed RSS and various Hindu outfits, have been swarming across the state demanding that the CPM-led Left Democratic Front government file a review petition in the Supreme Court and also issue an ordinance to stop women of the restricted age group from going to Sabarimala. The protests have exposed the ingrained obscurantism beneath the veneer of a progressive society and the cynical politics of religion that is at play.

Coarse, violent language – unheard of in Kerala – is making the headlines as the BJP whips up religious frenzy. Actor Kollam Thulasi shocked listeners as he told an NDA rally in Kollam that women who tried to enter the temple must be ripped in half. For good measure, Thulasi, a known BJP supporter, said one half of the woman should be sent to the chief minister’s office in Thiruvananthapuram and the other half to Delhi. “What we are seeing is a repeat of the Ayodhya madness and north Indian barbarity, both new to our state,” says P. Jyothsna, a high school teacher from Irrity.

All of a sudden, the discourse is about “vishwasam” or belief, an odd subject for Kerala where the semantics of dialectic materialism continues to be discussed. The state, however, is a paradox in many ways, a place where religion and rituals fill the calendar while communist governments are voted in regularly. This time though things could change and, possibly, in a lasting way. The frenzied politics of religion that is being played out over Sabarimala is extraordinary and could well tip the balance of power and the fortunes of the three main political formations in the state: the CPM-led Left Democratic Front (LDF), the BJP’s NDA and the United Democratic Front of the Congress and its allies which includes the Indian Union Muslim League (IUML).

It was odd to see the IUML lead a rally, complete with party flags, in Changanassery, Kottayam district, in support of Hindus protesting the opening up of Sabarimala. But there’s a good reason why IUML general secretary P.K. Kunhalikutty is openly backing maintenance of status quo at the Ayyappan temple. Inspired by the Sabarimala verdict, NISA, a progressive forum of Muslim women based in Kozhikode, has announced it is approaching the top court to demand that women be allowed to enter Sunni mosques, a move that the party clearly does not approve of. Besides, the previous UDF government of Oommen Chandy had filed an affidavit in the SC that the traditions of Sabarimala temple should not be disturbed.

The first salvo in the campaign against the SC judgement was fired by the New Indian Express at a time when the RSS had welcomed it. In a front page editorial, Manoj Kumar Sonthalia, chairman and managing director of Express Publications, warned that the judgement “may be the beginning of a new age of faith-denouncing and faith-asserting litigations. Are the courts prepared for such an avalanche? Is the nation?” The editorial line received the immediate support of Congressman Ramesh Chennithala, a strident critic of the verdict, who tagged it in his tweets. Chennithala, who describes himself as a dedicated devotee of Ayyappan, has been fierier than his saffron counterparts in his criticism of the SC and the refusal of the Pinarayi government to file a review petition.

The LDF Govt & board should seek a review petition against the Sabarimala https://t.co/4KqMfGXaPB now seems that the verdict was based on wrong arguments & divergent views taken by the LDF Gvt & Board before the SC.I concur to the views that rationality shouldnt overtopple faith pic.twitter.com/jXvP1pO4Mh

It was only later that the RSS changed its position from welcoming the judgement to censuring it. With the Lok Sabha elections round the corner, the RSS-BJP is clearly scenting electoral blood in the Sabarimala issue given the widespread annoyance of Hindu believers with what they see as the “interference” of the court in matters of faith and age-old rituals. That’s why both the organisations have done a complete U-turn on the SC judgement however embarrassing and damaging the volte face is to the declared stance of RSS.

The most awkward retraction has come from RSS senior leader Suresh Joshi who has been espousing temple entry for women since 2016 and had declared that entry into places of worship has to be irrespective of caste, sex and creed. But Joshi’s initial enthusiasm for the SC verdict faded pretty quickly with Nagpur headquarters of the Sangh saying the sentiments of thousands of devotees, including women, should be respected.

Deftly, the RSS has turned into a political confrontation by accusing the CPM government of Pinarayi Vijayan of being responsible for the violent reaction to the verdict. “Unfortunately, the Kerala government has taken steps to implement the judgment with immediate effect without taking the sentiments of devotees into consideration. There is an obvious reaction to the same by the devotees, especially women, who are protesting against the forceful breaking of the tradition,” Joshi said. File photo of devotees at the Sabarimala temple. Credit: PTI

The RSS-BJP has found natural allies in the upper caste organisations that still hold sway in Kerala more than six decades after it made history as the first state to elect a communist government. From the Kerala Brahmana Sabha (KBS) and the Tantri Mahamandalam (a collective of the priestly class) to the Nair Service Society, the upper caste have banded together to force the CPM government’s hand. These organisations have filed review petitions in the Supreme Court saying it had erred in calling the restrictions on women at Sabarimala a gender discrimination issue pertaining to menstruation. The court, they maintain, is not “whether the practice in question is an essential aspect of Hindu religion” but whether the impugned practice is an essential aspect of the Sabarimala temple… “The Court has completely ignored the diverse practices, traditions and schools which exist within the Hindu faith.”

These are legal niceties which will obviously take time to be heard and sorted out. What matters at the moment is how the Pinarayi Vijayan government deals with the ugly situation in the small towns which form the base camps for pilgrims making the trek to the shrine and more importantly with easing the charged atmosphere in the state. While dozens of RSS supporters have been arrested at Nilakkal and Pamba for violence and obstructing women pilgrims, the government has its work cut out for it.

In battle readiness are right-wing parties from the BJP and its NDA constituents among them the Shiv Sena. There is also Praveen Togadia’s Antarrashtriya Hindu Parishad (AHP) which has walked from Pandalam, the putative birthplace of Ayyappan, to Thiruvananthapuram calling on the Central to government to pass a law freeing the control of the Devaswom boards and the state government. Adding to the tense situations are toxic speakers like Sadhvi Prachi and Sasikala Teacher (of the Hindu Aikya Vedi), a Kerala-based organisation that spearheads a relentless communalisation drive in the state. BJP leaders are often drawn from HAV, most notably its general secretary Kummanam Rajasekharan who was president of the Kerala BJP till he was made governor of Mizoram in May this year.

If the Congress in Kerala is finding itself in bed with Hindu right-wing on Sabarimala, it does not appear to be discomfited. Although they claim they are not acting in concert, their views are in perfect tandem. Both maintain that the sentiments of the vishwasi (believer) should not be upset. Both also laud the dissenting judgement given by Justice Indu Malhotra who had said “Issues of deep religious sentiments should not be ordinarily be interfered by the court… What constitutes essential religious practice is for the religious community to decide, not for the court.”

But for the Congress, the political calisthenics of maintaining complete divergent views by the party high command – the All India Congress Committee has welcomed the SC verdict – and its Kerala branch has become a matter of embarrassment if not outright popular ridicule. And it is bound to further erode the party’s credibility. If the Congress persists with its strategy of seeking a consolidating of the Hindu sentiment – and vote – it is unlikely to pay dividends for party, according to some observers. “Congress will be just a shadow of the BJP in Kerala if it banks on the Hindu vote to bring it back to power,” believes a professor of history who did not wish to be named. “Hindu consolidation will only help BJP.”

Is Kerala at an inflexion point? Perhaps, it is. When BJP leaders talk of a turning point in Kerala politics it may be more than wishful thinking given the success of the insidious communalisation crusade by the saffron outfits over the decades. Efforts of organisations such as HAV are paying off in different ways even if it has not succeeded in providing electoral dividends as yet for the BJP. In local elections, BJP is making its mark and faring much better than the Congress.

For the Left, religion has been a poisoned chalice. Its efforts to propitiate the religious beliefs of the Hindus by including celebrations of religious festivals have not been much of a success given the aggressive push and counter propaganda by the BJP. In the case of Sabarimala, Vijayan, just back from the US after several weeks of medical treatment, knows he has to walk an extremely risky tightrope. His repeated statements that his government would implement SC orders at any cost are likely to alienate many of the party faithful who are also vishwasis. This may explain his sudden decision to allow the Travancore Devaswom Board (TDB) to take its own decision on filing a review petition. Initially, the chief minister had lashed out at TDB president chief A. Padmakumar for criticising the verdict. Interestingly, Padmakumar is a former MLA of the CPM.

Even in Kannur, the home turf of Vijayan and other CPM stalwarts, there is a perceptible ‘Hindu sentiment’ among the party rank and file that appears to transcend Marxist ideology. R Pavithran, a union worker from Kanhangad, sums up the dilemma: “Sabarimala has its own customs and it is best not to meddle with religious beliefs customs. Our party [CPM] will get hurt if we are not careful. We should find a way out.”

Between the flood devastation and the Sabarimala quagmire, Kerala is, indeed, in an unholy mess.

Latha Jishnu, a senior editor and columnist, is a journalist of many decades.