So far, the beneficiaries of the Sabarimala verdict seem to be the BJP as a party and and the Kerala chief minister as a leader. Kochi: Swami Sandeepananda Giri, the founder and chairman of the School of Bhagavat Gita Trust has been a target of the Sangh parivar ever since he started conducting discourses and lecture series on the Bhagavad Gita, the Upanishads and other texts, across the country and abroad. He had not been taking the Sangh’s path to define and interpret Hinduism and has never missed any opportunity to ridicule the right-wing Hindutva forces using their own tools of religion. The threats became a part of his routine of late after he started being vocal against the protesters who opposed the execution of Supreme Court verdict on Sabarimala. On October 23, his Salagramam ashram in Thiruvananthapuram was set ablaze by some miscreants. The arsonists placed a wreath at the gate of the ashram offering condolences to P.K. Shibu, a name the Sangh parivar has attributed to him.

“It certainly is the result of a conspiracy by the Sangh parivar leadership, as I have been vocal on the issue of women’s entry to the Sabarimala shrine. P.S. Sreedharan Pillai who is the BJP state unit president, the Panthalam royal family and the Thazhamon family where the chief priest of Sabarimala is from, are responsible for the attack,” said Sandeepananda Giri. 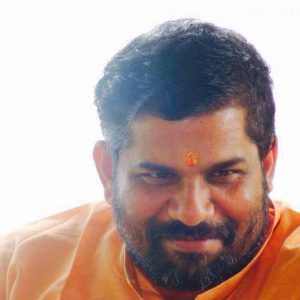 For the Sangh parivar he is a deviant, who needs to be taken to task, which they do whenever possible and in every possible way. On October 27, it was evident on a television show where the Sangh supporters took him on by calling him P.K. Shibu, a common secular name (but with subtle caste connotations) they attribute to him to dismiss his identity as a seer. The pro-Sangh participants would not heed to the moderators who repeatedly tried them to convince that Swami’s original name was not Shibu as they call, but Tulasidas before he was ordained as a sanyasi.

‘They are doing it deliberately,” said Sandeepananda, “They [the upper caste feudal lords] used to refer Sreenarayana Guru as Nanu and even Cement Nanu, Sahodaran Ayyappan was called Pulayan Ayyappan. They just want to discredit me as a seer. I am known to the Malayalis for my spiritual and intellectual teaching or preaching of Bhagavad Gita, Upanishads and Sreenarayana philosophy, not for selling shampoo, atta or grocery items as some so-called sanyasis do. If at all I had preached that the cow exhales oxygen or cow dung has plutonium in it or the 2,000 rupee note has nano-chip installed, they would have been happy with me’ added the Swami.

The attack on the ashram has come at a point when the Sabarimala issue has boiled down to a virtual showdown between the Pinarayi Vijayan-led LDF government and the combined right-wing forces with the Sangh parivar at the helm. The chief minister wasted no time in visiting the ashram and voicing his concern.

“This is nothing but an attempt on Swamiji’s life. Dissent must be voiced through ideas and not with the aid of violence. The use of violence reveals the ideological abjectness of the attackers. No one will be allowed to take law into their hands. Swami Sandeepananda Giri champions the values of secularism and has been a strong critic against attempts to politicise religious spaces. Our society must rise against such attacks,” said Pinarayi Vijayan after visiting the Salagramam.

Several ministers and left leaders rallied in solidarity with Sandeepananda Giri, making it an opportunity to expose the devious projects of the militant Hindutva forces in the wake of the Sabarimala judgement.

The BJP said that this is a plot hatched by Sandeepananda Giri and Pinarayi Vijayan to deflect the attention from ‘people’s anger’ over the Sabarimala issue. “This is part of the conspiracy hatched by them. Police are now saying the CCTV cameras were not working. In truth, the whole of India is angry with the state chief minister. The arson is a plot to divert the attention from the Sabarimala issue,” P.K. Krishnadas, the party’s former state president said.

After the violent incidents at Sabarimala last week, the focus of the issue had been shifted to the government’s stance towards it. In an unprecedented series of actions, the police has taken stern and stubborn action on the protesters by arresting over 2000 of them in connection with 450 odd cases registered in the state. Panic had started gripping the Sangh parivar rank and file as the police was in no mood to relent. Even though the Kerala high court cautioned the police that discretion should be maintained while arrests are made and do not play for the gallery, about 250 were remanded to judicial custody in three days’ time.

On the other hand, the government and the left parties, which had gone defensive after a wave of protests taking over the streets, has started gaining confidence with the massive turnout in the public rallies of Pinarayi Vijayan. The chief minister had been in a zero-tolerance mood ever since the row broke out. He reiterated that the government is committed to the women’s cause in Sabarimala issue and would implement the Supreme Court order, come what may. Holding the BJP accountable for the violence, he did not spare even the family of the chief priest and the royal family of Pandalam.

The chief minister’s ‘political explanation rallies’ across the state have effectively turned the tables in his favour. The newfound popularity of Pinarayi Vijayan among the ‘hardline secularists’ and broad leftists who had been critical of his ‘right-wing deviation’ for the last two decades has given confidence to the left block. Now the agenda for the next general elections has been set and this time it is a perfect binary of secularism versus Hindutva and the biggest causality of this development seems to be the Congress led UDF. The UDF, and Congress in particular, is paying the price for not taking a firm position on the issue. The former UDF government which had taken a position against the entry of women of all ages in Sabarimala in the Supreme Court, lost the game right in the first half to better players of the same game plan, the BJP. Pinarayi Vijayan at Sandeepananda’s ashram after the attack. Credit: Facebook

Some of their leaders of the likes of G. Raman Nair, who had been the president of the Travancore Devaswom Board during the UDF regime, switched sides to join the BJP. The CPM also could well be facing the same fate as the current TDB President A. Padmakumar an ex-MLA and former central executive member of the DYFI is all against the entry of women of all ages to the shrine. Speculations are ripe that Padmakumar may resign as the president of the board sooner or later.

The BJP on the other hand is pushing hard to maintain the upper hand it got during this entire Sabarimala episode. Amit Shah’s scathing attack on not only the government but on the Supreme Court verdict also was not a knee jerk reaction. Every word he uttered in Kannur, Kerala was well calculated. “A non-believer government is trying to do enough dirty jobs in the name of a verdict. Instead of giving relief to the flood-hit, this government is hell-bent on tackling peaceful devotees,” said the BJP president, going on to caution the LDF that the BJP workers will not hesitate to pull down his government if the suppression continues.

Pinarayi Vijayan was quick to reply to him on his Facebook page, stating that the remarks of BJP President were an attack on Supreme Court, Indian Constitution and our judicial system.: “The BJP president’s assertion that courts must only pronounce verdicts which could be carried out conveys the message that fundamental rights guaranteed by our Constitution are not meant to be implemented. These statements of Shah also reveal the true colour of RSS and Sangh parivar.”

“Amit Shah, who threatened to oust the LDF government, must remember that this government did not come to power at the mercy of BJP but with the support of the people of this state,” added the chief minister.

Later, in a bid to woo the SNDP Yogam which keeping an arm’s distance from the ongoing agitation, Shah showered praise on the organisation and the contribution of Sree Narayana Guru in the educational and social development of the state. However, Vellappalli Nateshan, general secretary of the Yogam maintained his stance that the organisation would not take part in the Sabarimala agitations as it is committed to obey the SC orders even if it stood against its interests. Amit Shah’s open challenge has invited criticism from various corners, as his words clearly stood against the concept of federalism.

“If there is indeed a tukde-tukde gang its commander-in-chief is Amit Shah. He will divide, polarise, and fan anger, hatred, violence – anything to win elections. He is the most dangerous and divisive politician in the history of independent India,” tweeted historian Ramachandra Guha.

If there is indeed a Tukde Tukde Gang its Commander-in-Chief is Amit Shah. He will divide, polarise, and fan anger, hatred, violence—anything to win elections. He is the most dangerous and divisive politician in the history of independent India.

Whatever may be the circumstances, one cannot deny the fact that the BJP is slowly but steadily gaining ground in Kerala thanks to the Supreme Court verdict and a unconvincing stance taken by the Congress. Many political observers think that the Congress presented the issue on a platter for the BJP to capitalise on it. The LDF on the other hand has emerged as the sole defender of secularism in the state with the chief minister in an offensive and aggressive mode, leading from the front. The BJP as a party and Pinarayi Vijayan as a leader have been the beneficiaries of the Sabarimala verdict so far.