Over 600 people were taken into preventive custody, while section 144 was imposed in Palakkad after CPI(M) and BJP workers clashed.

BJP workers pelt stones in Palakkad while protesting the entry of women into Sabarimala. Credit: PTI

New Delhi: The Kerala police have arrested at least 745 people and taking another 628 into preventive custody after a hartal against the entry of women into the Sabarimala temple saw normal life disrupted on Thursday. Several dozens were injured, while one person died. The media was also reportedly attacked by right-wing activists at several places.

The hartal was called by the Sabarimala Karma Samithi, a grouping of various Hindu organisations. The Bharatiya Janata Party supported the hartal, while the Congress-led opposition coalition observed a black day.

Workers of the Sabarimala Karma Samithi and the BJP blocked roads, throwing traffic into haywire. Reports said that at least two police stations were attacked and at least 31 police personnel were injured. Over a 100 buses were damaged by protesting activists between Wednesday and Thursday. Clashes broke out at several areas between workers of the ruling Communist Party of India (Marxist) and the BJP. According to Scroll.in, six BJP workers sustained stab wounds. Three BJP workers were stabbed at Vadanappally in Thrissur, allegedly by members of the Social Democratic Party of India. A CPI(M) worker was injured when an explosive he wanted to hurl at BJP workers went off in his hand.

Chandran Unnithan, who took part in the Sabarimala Karma Samithi’s protest march on Wednesday, was seriously injured when stones were pelted at the protestors. He died late on the day.

The state’s governor P. Sathsivam said he has asked chief minister Pinarayi Vijayan to submit an “urgen law and order report” on the incidents of violence. He also appealed that peace and calm be maintained.

Sought from Chief Minister @CMOKerala an urgent Law and Order report  on the incidents of violence and destruction of private & public property in Kerala following entry of two young women in #Sabarimala temple.
I appeal to all sections of  people to maintain  calm & peace

Just hours after the hartal ended, the Palakkad district collector imposed a curfew under Section 144 in the town from 10:30 pm on Thursday to 6 pm on Friday. Palakkad witnessed violent clashes between members of the CPI(M) and the BJP.

Kasargod district Collector D. Sajith Babu issued a prohibitory order at Manjeshwaram Taluk under Section 144 of the Code of Criminal Procedure (CrPC) at 11 pm on Thursday for 24 hours.

Section 144 of CrPC prohibits an assembly of more than four persons in an area.

According to The News Minute, the curfew was imposed on the apprehension that the “large-scale violent/undesirable activities” that had taken place “among some cadres of different political outfits” would continue. District collector D. Balamurali said that section 144 was imposed to ensure “public peace and tranquillity” is not affected.

In Palakkad, a BJP march from Government Victoria College was cancelled by police on Thursday morning. after members of CPI(M), SFI and BJP pelted stones at each other even before the march started. A CPI office near the college was allegedly vandalised by BJP workers.

A counter march by the CPI and CPI(M) on Thursday evening protested the vandalism of the office. Even this march soon turned violent as the members of BJP, CPI and CPI(M) started pelting stones again. 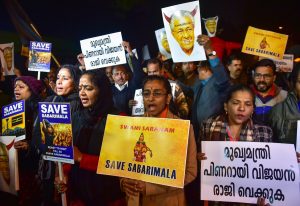 A protest at Kerala house in New Delhi against the entry of women into the Sabarimala temple. Credit: PTI

Former Congress president Sonia Gandhi on Wednesday stopped the party’s Kerala MPs from holding a “black band” protest in the Lok Sabha against the entry of two women into the Sabarimala temple.

According to the Indian Express, Sonia Gandhi told the MPs that Congress “stood for gender equality and women’s rights”. She is reported to have asked the MPs to continue their protests in the state as part of the “local politics”, but not at the national level as it would go against the party’s beliefs.

Also Read: What If Sabarimala Was in a BJP-Ruled State?

“But at the national level, the MPs should not protest against women entering the temple, because it would go against what the Congress stands for — gender equality and women rights,” the Indian Express reported, quoting sources.

The Congress has seven MPs from Kerala.

Since the Supreme Court’s landmark judgment allowing women to enter the temple, the Congress has taken contrarian stands on the issue. While it initially welcomed the verdict, the state Congress unit has opposed its implementation.