The Sangh parivar is experiencing turbulence with local sadhus and is wary of further deterioration in its ties with Dharam Das, who heads the most powerful akhara in Ayodhya. 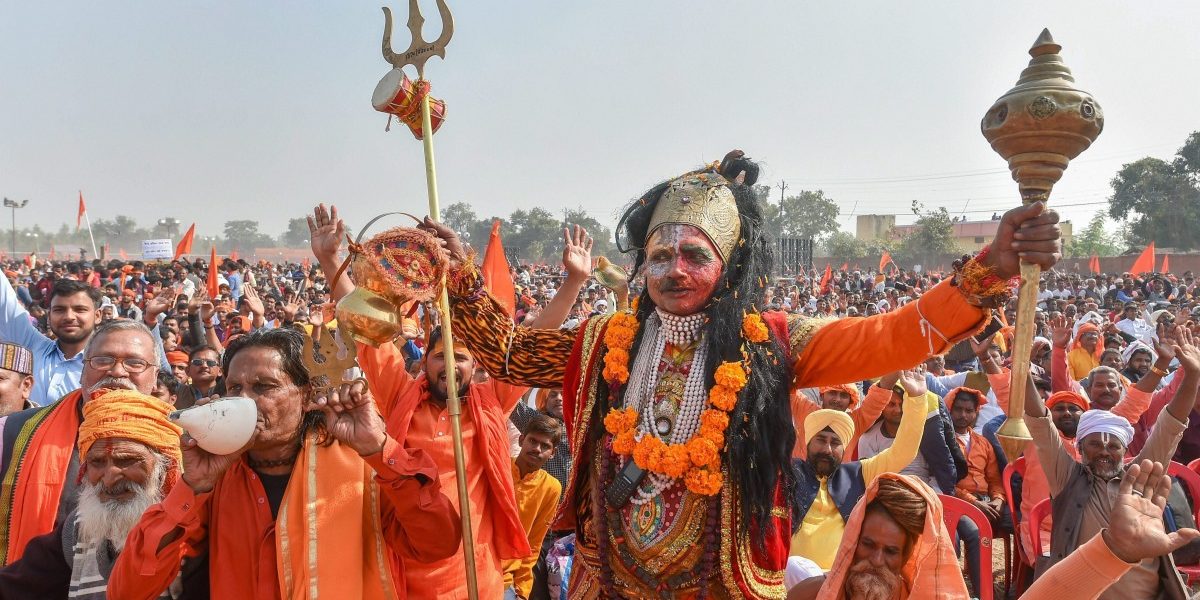 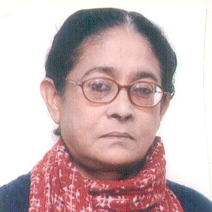 In December 1949, an unholy alliance between Digvijay Nath, the then mahant of Gorakshapeeth temple of Gorakhpur, and Abhiram Das, a little known sadhu of Ayodhya, proved critical in planting of a Ram idol in Babri masjid. The alliance survived for seven decades, their successors keeping the warmth alive all through. However, the Rashtriya Swayamsevak Sangh’s (RSS) demand for a central legislation to facilitate early construction of Ram temple has made it convulse.

Adityanath, the present mahant of Gorakshapeeth temple and the chief minister of Uttar Pradesh, is one with the RSS. He owed his initial political successes largely to the Hindu Yuva Vahini (HYV), his private militia existing outside the purview of the Sangh parivar. He has now placed himself at the mercy of the RSS, practically dismantling his own outfit in order to appease his new masters.

But for Dharam Das, the disciple and successor of Abhiram Das and the chief of Nirvani Akhara, one of the three militant ascetic orders of the Ramanandi sect, this position is not acceptable.

It is this position of Dharam Das that has stopped him from taking part in the events of the Vishwa Hindu Parishad (VHP), the RSS’s flamboyant outfit spearheading the Ramjanmabhoomi movement, despite being a prominent member of the VHP’s central governing body (Kendriya Margdarshak Mandal).

Dharam Das never forgets that he is the successor of the sadhu who surreptitiously planted Ram’s idol of in Babri masjid in the night of December 22, 1949. His claim to the legacy of Abhiram Das overrides his loyalty to the VHP and the Sangh parivar. This puts him at odds with Adityanath and makes him oppose Sangh Pariwar’s bid to monopolise the whole issue.

“It is because of my guru that Ramjanmbhoomi temple was reclaimed. Where was the VHP at that time? How can the RSS claim monopoly over the site?” asked Dharam Das.

Indeed, after Abhiram Das, a Hanumangarhi-based sadhu of Nirvani akhara, planted the idol in Babri masjid in 1949. An FIR was filed against him and a criminal case began. For a section of local Hindu fanatics, however, his act made him “Ramjanmabhoomi uddharak” (liberator of Ramjanmabhoomi) or simply “Uddharak Baba”. 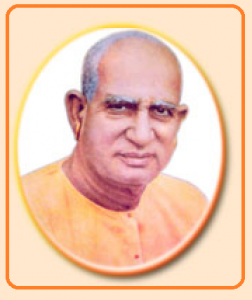 But the original sin that led to the forcible conversion of Babri masjid into a temple might not have been committed had he not worked under the patronage of Digvijay Nath, the “dada guru” (guru’s guru) of Adityanath and one of the most cunning sadhus of the twentieth century.

The conspiracy Digvijay Nath presided over was carefully considered. Having joined the Hindu Mahasabha in 1939, he had risen fast in the party ranks, due partly to his political acumen and partly to his status as the mahant of Gorakshapeetha temple. Within a decade, he had already become one of the most influential leaders of the Mahasabha and president of its UP unit.

In the latter half of 1949, when he started executing the Ayodhya strategy, he knew that his party alone would not be able to accomplish the task. For this, he needed the active participation not just of the district administration and his local party leaders, but also of sadhus of Ayodhya.

Abhiram Das, a foul-mouthed, ill-tempered sadhu without whose active cooperation no conspiracy of turning a mosque into a temple could have materialised on the ground, just fitted in the mould. What brought him close to Digvijay Nath was the fact that Abhiram was also an enthusiastic worker of the Mahasabha in Ayodhya.

In Ayodhya and its religio-cultural epicenter, Hanumangarhi, the “baithak” or the main seat of power of Nirvani akhara, Abhiram Das was fairly well known. During the period since 1934, when he came to Ayodhya from Bihar and became a sadhu, his prominence in Hanumangarhi, a fortress-like structure housing over five hundred sadhus, had grown quite rapidly, although it had nothing to do with his spirituality.

Also Read: The Babri Masjid Demolition Was Impossible Without RSS Foot-Soldiers Like These

In fact, never did he show any yearning for acquiring knowledge through studies of religious texts, nor did he ever engage with others on issues concerning spirituality and metaphysics. It was the wrestling pit, the akhara, in Hanumangarhi where he excelled. Such was his performance as a wrestler that in a short while, the residents of Hanumangarhi and gradually most of the sadhus of Ayodhya felt that this man had the blessings of Lord Hanuman, the Hindu god of martial arts.

Participation in the Ayodhya strategy

As his stock rose, so was his active participation in the activities of the Hindu Mahasabha. When Digvijay Nath, as the UP chief of Mahasabha, went for the final push, Abhiram Das had already been spotted. He was made the organisational secretary of All India Ramayan Mahasabha (AIRM), the outfit of Hindu Mahasabha formed to carry out its Ayodhya strategy.

It was the AIRM, working under the guidance of Digvijay Nath, which finally built the atmosphere conducive for the communal offensive. Abhiram Das led a small band of Hindu fanatics to surreptitiously plant the idol of Lord Ram in Babri Masjid.

The relationship born thus kept growing. When Digvijay Nath first contested the Lok Sabha election from Gorakhpur seat on the Hindu Mahasabha’s ticket in 1962, Abhiram Das campaigned for him. He, however, lost the election. The Gorakshapeeth mahant tried his luck from the same seat in 1967 and emerged victorious. Abhiram Das was once again an enthusiastic campaigner.

On Digvijay Nath’s death in 1969, when Avaidyanath, his disciple and successor, stood for the Lok Sabha election from Gorakhpur in 1970, Abhiram Das remained by his side. Avaidyanath won the election, but lost it in the very next election held a year later.

For almost two decades during 1970s and 1980s, Gorakhpur constituency remained out of the sway of the Gorakshapeeth temple. In 1989, however, the temple influence in the seat – supported as it was by a group of sadhus led by Dharam Das – revived and Avaidyanath once again was elected to the Lok Sabha.

Also Read: Every Political Party in India Was Complicit in the Babri Masjid Demolition

By then, Dharam Das had developed his own stature in Ayodhya following the death of his guru Abhiram Das in 1981. Soon, he also joined the VHP.

Avaidyanath continued representing Gorakhpur in the Lok Sabha till 1998, when he left the seat for his disciple Adityanath. Honouring the Gorakshapeeth mahant’s decision, Dharam Das now started campaigning for Adityanath. Even in the last Lok Sabha polls in 2014, Dharam Das spent quite a lot of time in Gorakhpur campaigning for the present mahant of Gorakshapeeth temple.

Dharam Das was among the distinguished guests taking part in the celebrations organised in Lucknow last year when Adityanath became the chief minister of the state. He could even be seen in the frames with the new chief minister every time the latter visited Ayodhya. 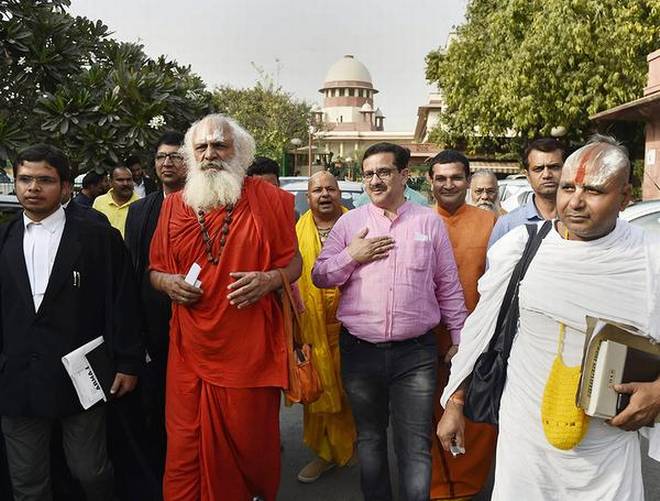 An avarice is born

For the first time, however, the avarice – born after the RSS’s push for an ordinance or a Central legislation – seems to have killed their decades-old unity. Though the two have so far avoided any face off, the deepening of the gap, amidst intensification of the fight for control over the so-called birth place of Ram, has taken place at an unusual pace.

The breadth of the divide threatens not only to rip up the age-old relationship but also Sangh parivar’s ability to revive its sway over sadhus of Ayodhya in the manner it enjoyed during early 1990s or on some specific occasions thereafter.

As it is, the parivar is experiencing turbulent ties with local sadhus – something that became evident once again in the non-participation of most local religious leaders in the VHP’s dharma sabha organised on November 25 in Ayodhya.

A further deterioration in its ties with Dharam Das, who heads Nirvani akhara, arguably the most powerful among the three Ramanandi akharas (the other two being Nirmohi and Digambar Akharas), may make things even more difficult for it in what is seen as the nerve centre of the Ramjanmabhoomi movement.