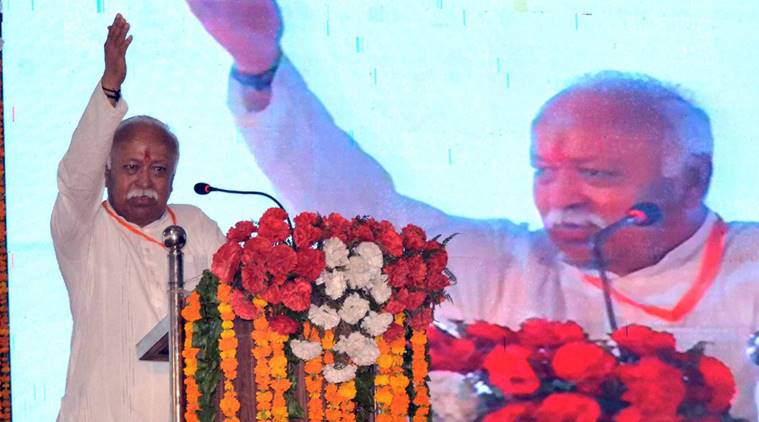 Recently, Mohan Bhagwat, the chief of the Rashtriya Swayamsevak Sangh (RSS) made controversial remarks in response to questions about population growth of Indian Muslims. He was addressing a gathering of young couples at Agra College. Hindutva groups such as the RSS have long stoked fears of Muslims becoming the largest religious group in India.

In fact, Prime Minister Modi too had infamously fanned such a narrative when he was Chief Minister in Gujarat. Of course, there is no evidence to support the outlandish claims of Hindutva groups. But, in the immortal words of Mark Twain, “a lie can travel half way around the world while the truth is putting on its shoes.” It is my intention to help truth chase lies down. I am particularly interested in the kinds of lies that are divisive and put ordinary lives in danger.

Let’s first see what the controversy was about. At this event, Mohan Bhagwat was taking questions; two questions/comments in particular have been quoted by various media outlets.

In response, he is quoted to have said: “Which law says that the population of Hindus should not rise? What is stopping them when population of others is rising? The issue is not related to the system. It is because the social environment is like this.”

After an uproar ensued, RSS clarified Bhagwat’s comments in the following way:

I think we all know what Mohan Bhagwat meant. Muslims are producing too many kids, they will overwhelm India’s Hindu majority character. Hindus should have more babies. If that is too much to ask, let’s bring in restrictions on how many kids people (read Muslims) can have. Of course, he is too smart to believe Muslims will outnumber Hindus. There is zero evidence to support that. But, fear mongering has its political advantages. So, why not say whatever it takes to promote Hindutva? It is for this reason that we must rebut the majoritarian propaganda of the RSS.

So, what are the facts? According to official census 2011 data, Hindus now constitute 79.8% of India’s population. In 2001, Hindus were 80.45% of the population. On the other hand, Muslims are now 14.2% of the population. In 2001, Muslims population was 13.4% of the total. Between 2001 and 2011, Hindu population grew at an annual rate of 1.55% while Muslims grew at 2.2%. Clearly, Muslims have grown faster than Hindus have. But, that is not the entire story. In fact, Muslim growth rate is slowing down at a rate faster than it is for Hindus. Between 1991 and 2001, the annual growth rate for Hindus was 1.8% and for Muslims it was 2.6%. This relative slowdown in Muslim growth rate is part of a natural demographic transition due to different factors including female education.

Another indicator of population trends is the total fertility rate (TFR), which is the number of births per woman. According to the National Family Health Surveys (NFHS-3 from 2005-06), TFR for Muslim women is 3.1 while it was 2.7 for Hindu women. While Muslim TFR is higher, the gap with Hindu women has narrowed significantly. In the NFHS-1 (1992-93), TFR for Muslim and Hindu women was 4.4 and 3.3 respectively. Furthermore, RSS is aware that the fertility rate of Muslims is similar to fertility rates of scheduled castes and scheduled tribes. Socioeconomic factors play an important part in evolution of fertility rates. If RSS really wants speed up the decline in Muslim fertility rates, perhaps the right approach would be to help improve the socioeconomic status of Muslims. Now, that would be quite an innovation for RSS. In any event, based on census data on population growth rates and their expected path, as well as the TFR data from NFHS, I am confident Hindus will likely remain at about 80% of India’s population throughout the 21st century.

But, aren’t Muslims growing so rapidly in countries like France that they will soon overwhelm the “original” residents? By extension, if Muslims can do it in Europe, they can do it India, seems to be the argument. The simple answer is ‘No’. The Pew Research Center estimates that while Muslim fertility rates are higher than for non-Muslims in France, the differences are far smaller than the RSS would have us believe. The Muslim fertility rate in France is 2.8 (not 8.1) for Muslims versus 1.9 for others. By 2030, Muslim fertility is likely to drop to 2.4 while for non-Muslims, it will remain at 1.9. The gap between Muslims and non-Muslims is narrowing. In fact, this narrowing gap in fertility rates between Muslims and non-Muslims is happening across Europe in countries such Belgium, Germany, Italy, Spain and the United Kingdom. The Pew Center suggests that fertility rates among Muslims (and others) will approach replacement level (2.1) by 2050. This appears to be a natural equilibrium.

Many others have fact-checked RSS talking points on Muslim population growth. Others have pointed out, as I do here, that RSS is spreading falsehoods for political reasons. RSS is so cynical that it continues to push this narrative of the demise of the Hindu majority even as it knows well that nothing close to it is happening. Under such circumstances, we have no choice but to repeatedly call out the lies spread by RSS. But even the RSS must know, truth alone triumphs!

The writer, formerly with the World Bank, is a National Media Panelist of the Indian National Congress. Views expressed are personal.