What Will Politics Look Like in the Post-Pandemic World?

If authoritarian regimes see a political advantage in the crisis, large-scale interventions by civil society groups and individuals have pushed forward a new kind of politics. 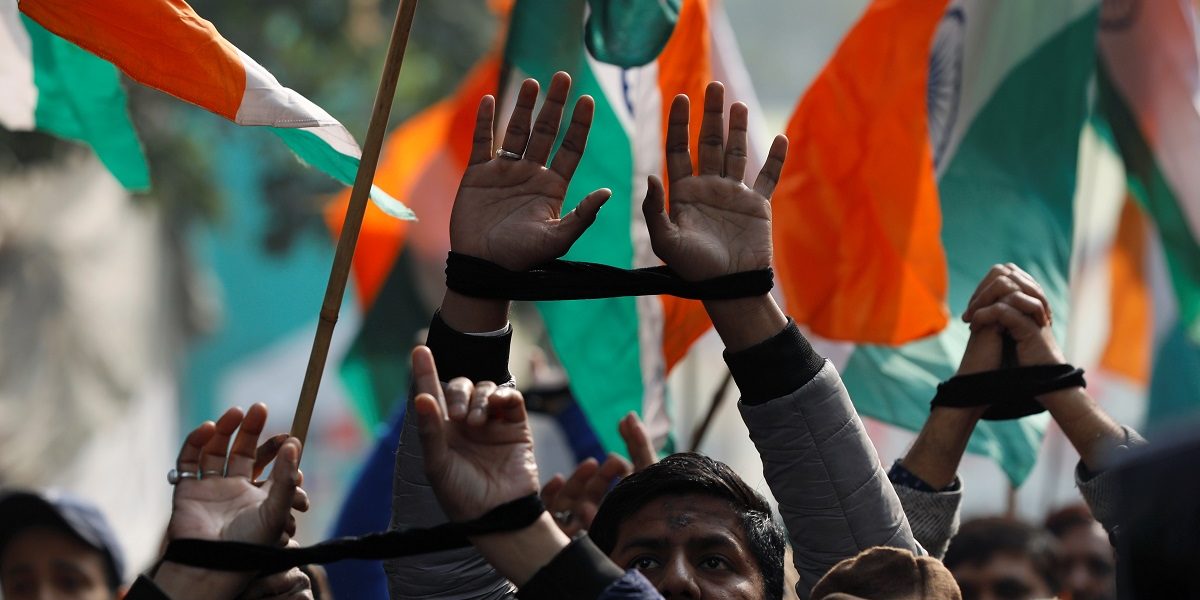 For better or worse, as the world takes leave of everyday normality, conventional means of transacting politics and rules of governance seem set to change. Sooner or later, the lockdown will end. People will step out of the spaces they have been confined in; and even as they heave a sigh of relief, the anxiety and fear of contracting an infection will endure. Governments with authoritarian tendencies will be unwilling to shed the extraordinary powers they have given themselves in this moment of national and global crisis.

Much, of course, remains uncertain as the scope of the virus and its intensity are yet to be determined. However, given the extent and depth of the current devastation, one can reasonably surmise that our political and public spheres are unlikely to return to normal – whatever normalcy meant until March – anytime soon.

The social domains where large numbers of people usually gather to give some shape to political and public opinion stand empty today. Public spaces – cafes, restaurants, clubs, congregational halls where, till the other day, people met, talked, and organised – are likely to remain desolate for months to come, even after the lockdown is lifted or partially released. Corroded by COVID-19, the world will surely renew itself. However, the paths to that renewal are scarcely clear from where we stand today.

The twin strategies of isolation and lockdown, aimed at creating physical distance among people to prevent the spread of infection, brings into question the continuance of mass, collective politics, and the endurance of the public/democratic spheres in the near future. We recently saw the importance of the politics of peaceful resistance during the anti-Citizenship (Amendment) Act (CAA) and National Register of Citizens (NRC) mobilisations, which witnessed significant spontaneous mass gatherings, energising a Republic and stalling (even if temporarily) the march of majoritarianism. But everyday politics is more than mass protests.

The realm of politics includes a range of transactions at local, national, and even global levels. In a post-COVID-19 lockdown world, hitherto familiar ways and means of conducting politics are also likely to mutate and transform. Important as they are, elections are only one critical part in the political life of democratic nations. Given the uncertainty over when a vaccine will be ready for public use, electoral processes – campaigns as well as modes of voting – may need to change significantly.

While assembly elections are scheduled in Bihar later this year, West Bengal, Kerala, Assam, Tamil Nadu, and Jammu and Kashmir all go to the polls next year. Postponing those polls does not appear to be a viable option, even if the virus crisis were to endure or return in that timeframe. On the other hand, physical distancing will not permit long queues of voters outside and inside polling booths. As recently as last week, we have seen the disastrous consequences of forcing people to vote under such conditions in the US.

Political rallies where large gatherings are addressed by aspiring leaders from competing political parties may be out of bounds for a while as well. Does this mean that in India, voting could become even more staggered than usual? How will campaign strategies evolve? Will large public gatherings and street meetings give way to more intense political messaging on social media and greater digital engagement? Will chief ministers and political leaders turn their social media handles into primary tools of political engagement? That would leave the vast majority of people, particularly those marginalised by the democratic process and hit hardest by the epidemic, out of political networks they need to represent their interests in however inadequate a manner.

Such transformations would also create obstacles for political parties because creating political messaging online is just not the same as calling forth gatherings of people in public spaces. These changed circumstances could potentially further widen inequality, besides deepening existing alienation between political classes and people at large.

Then there is the question of legislators meeting in state assemblies and parliament. What will be the fate of pending legislations and the Bills in offing?

Also Read: From Abuse to Jobs, the Crisis Will Burden Women More Than Men

As the coronavirus spreads around the globe, many white collar professions have moved online. Elite educational institutions have shifted classes online even in massively digitally divided countries like India. Will politics, too, move online? In an interview with the Financial Times in 2010, German philosopher Jurgen Habermas said that the “spontaneous and egalitarian nature of unlimited communication” can unsettle authoritarian governments but “the web itself does not produce any public spheres. Its structure is not suited to focusing the attention of a dispersed public of citizens who form opinions simultaneously on the same topics and contributions which have been scrutinised and filtered by experts.”

Changes in the domain of politics would go beyond elections. Everyday politics hinges on negotiations between stakeholders situated at various levels of multiple power structures. These negotiations, often centred around basic entitlements such access to 24×7 electricity supply, clean water, sanitation and hygiene, lead to collective and fractious interventions, drawn out over months. How such collectives will function in the coming days remains to be seen. Not to mention how some of those issues will be affected by the lockdown itself. Micro-level tussles are not going to die out in a post-pandemic world. In fact, social tension, stoked by economic stress, is likely to scale up. Will local leaders and stakeholders find new means of negotiating everyday conflicts directly impacting people’s life? 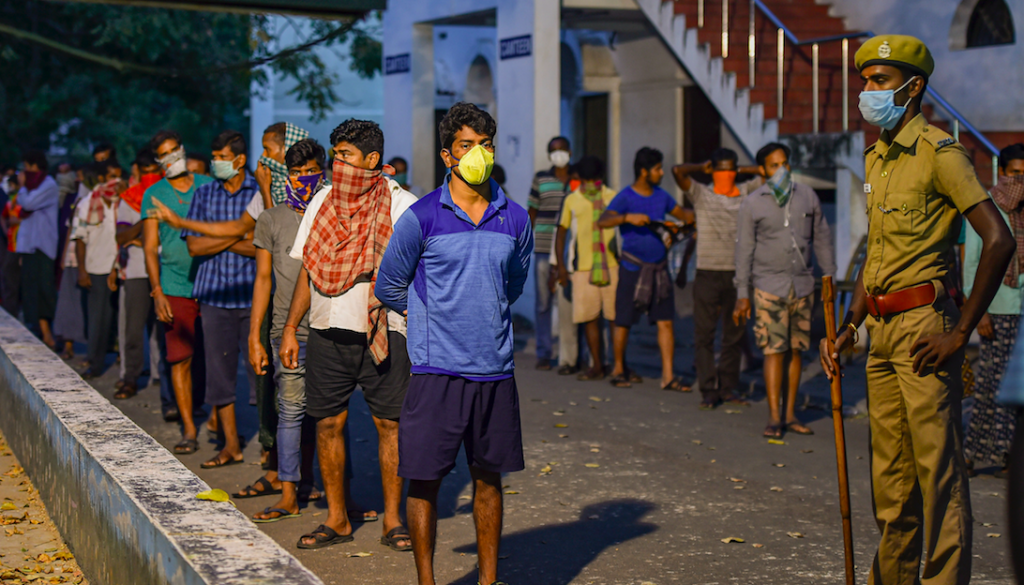 Whether in India or in the rest of the world, the onset of the epidemic has coincided with increasing attacks on democracy and democratic mobilisations. Containment strategies, even if temporarily, have accorded more and more centralising powers to governments. Public safety from the epidemic has come at the cost of individual and collective liberty. Authoritarian governments can take advantage of this precarious moment to cut back individual and collective rights for longer periods of time. We have no reason to believe they won’t try.

But there is another significant shift of power that has taken place in the midst of the upheavals. Left rudderless overnight, as thousands of migrant workers began to trek back home, civil society members stepped in. All across the country, young people have got together, launched community kitchens (a workers’ dhaba in Delhi, for instance) and distributed financial aid and food packages among the most vulnerable sections of people. Sangama, a non-governmental organisation working among Karnataka’s workers, non-English speaking gender and sexual minorities, sex workers, and people living with HIV, are following a well-defined plan that includes extending financial help and distributing essential food items among vulnerable communities hit hardest by the situation before us. These other modes of organising and alliance offer some hope in an otherwise dark time.

If on the one hand, authoritarian regimes see a political advantage in the crisis, large-scale interventions by civil society groups and individuals have pushed forward a new kind of politics that could also take roots in the coming months. As political commentator George Monbiot succinctly put it in The Guardian recently: “Power has migrated not just from private money to the state, but from both market and state to another place altogether: the commons. All over the world, communities have mobilised where governments have failed.”

It remains to be seen whether socio-political changes effected by the pandemic endure in the long run. But for the time being, humdrum models of doing politics have been ruptured. Despite dire predictions, therefore, the future is not set in stone. It could become what we make of it.