During his address in the Delhi Assembly, Kejriwal also accused Prime Minister Narendra Modi of using the movie for political gains. 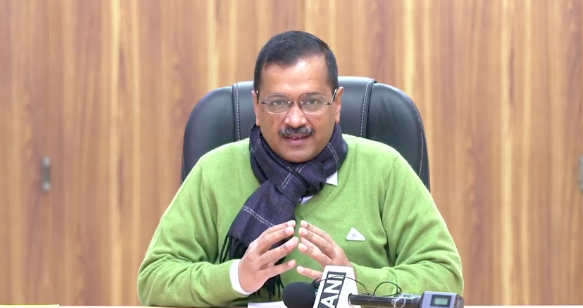 New Delhi: Chief minister Arvind Kejriwal on Thursday said the BJP MLAs demanding ‘The Kashmir Files’ be made tax-free in Delhi should upload the movie on YouTube and make it free for all.

During his address in the Delhi Assembly, Kejriwal also accused Prime Minister Narendra Modi of using the movie for political gains.

Hitting back, Delhi BJP president Adesh Gupta said that Kejriwal, by his remarks over the issue, has crossed all limits of political decency.

The movie, based on the exodus of Kashmiri Pandits from the Kashmir Valley due to terrorism, has kicked up a political storm. It is being actively pushed by BJP-ruled states by either offering tax concessions or giving government employees special leave to watch it.

The Opposition has, however, termed the film one-sided and too violent.

Kejriwal said the BJP leaders were demanding to make ‘The Kashmir Files’ movie tax-free when Lieutenant Governor Anil Baijal was speaking in the House on Wednesday.

“They (BJP) are demanding that the movie be declared tax-free in Delhi. Upload it on YouTube, the movie will become free and everyone will be able to watch it,” he said in the Assembly.

Kejriwal slammed Prime Minister Modi, alleging that even after ruling the country for eight years he has to take the help of the movie for political gains.

Prime Minister Narendra Modi, referring to the response to ‘The Kashmir Files’, had said the film has rattled the “entire ecosystem” which claims to be the torchbearer of freedom of expression but does not want the truth to be told.

Kejriwal, who is also the AAP national convener, further alleged that the entire BJP machinery was busy sticking posters of the movie across the country.

“Some people are earning crores in the name of Kashmiri Pandits and you (BJP) have been sticking posters of the film,” he said in the House.

“Even Hitler gave jobs to his lackeys. What did he (Modi) give you? Kejriwal works even for you. If someone in your family is ill, Kejriwal provides you medicines, not Modi. Open your eyes, leave BJP and join AAP.”

“The AAP had in the past supported the demand for a plebiscite by Kashmiri separatists. “So, appreciation fo ‘The Kashmir Files’ movie cannot be expected from him (Kejriwal),” he said.

Later in the statement, Kejriwal appealed to the BJP MLAs not to promote ‘The Kashmir Files’ film.

“Do whatever you want to do, but for the sake of god, stop wasting your time and position to promote this movie. It doesn’t look good for the position you command. Don’t act like children on the internet, please,” the statement quoted Kejriwal as saying.

He also claimed that the opposition “cannot digest” that AAP governments in Delhi and Punjab are honouring Babasaheb Ambedkar and Shaheed Bhagat Singh.

“BJP asks why didn’t you put up Savarkar and Hedgewar’s portraits while Congress asks for those of Indira and Rajiv Gandhi. Is this a joke?

“The BJP and Congress can put up whoever’s portraits they want. We want to honour Shaheed Bhagat Singh and Babasaheb Ambedkar and no one can stop us,” Kejriwal stated.