A Reporter's Account of Illegal Mining in Bundelkhand's Mahoba

The story of a district in thrall to illegal mining; a first person account from Khabar Lahariya’s chief reporter in Mahoba. 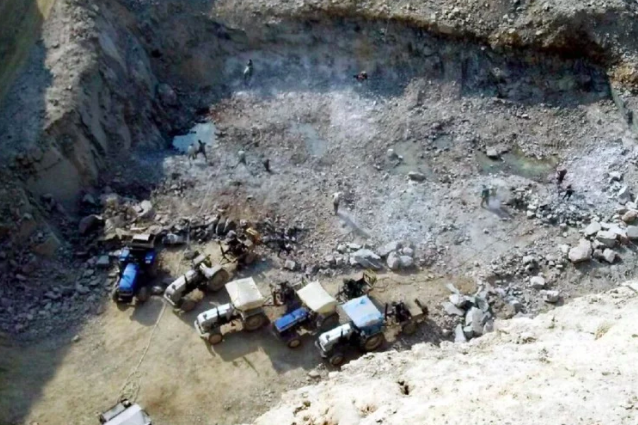 I’m Suneeta and I live in Kabrai, Mahoba (Uttar Pradesh) . I’ve been reporting from here for the past five years.

Ever since I’ve known, Mahoba has been under the spotlight for its  mining activities – legal or illegal. It’s hard to ignore the quarry dust which fills the towns, villages and streets. I have been a part of this environment all my life and have experienced it closely. I was born here and have worked here since I was a child. The people who engage in mining activities here are powerful and influential. They generally have leases assigned to them, often on the strength of bribes, to run the quarries. Usually, these people are not locals, but from cities like Banda, Kanpur, Allahabad. They then get local contractors to do the mining for them: people who operate by paying hafta at the small police posts at the sites of mining, going right up to the district magistrate’s offices for procuring illegal leases.

On the night of January 7, 2018, a few farmers in the Srinagar area of Mahoba, which lies along the banks of the Urmil river dividing Uttar Pradesh and Madhya Pradesh, gathered to protest the manner in which overloaded trucks that were transporting  sand from the river were  using their fields as a thoroughfare. Their fields were being destroyed – approximately 50 trees on their land had been cut down in order to create a road for the trucks to pass by. The resistance of the farmers has been countered by powerful police pressure through the years.

Hardayal Kushwaha, who is from Chattarpur, in Madhya Pradesh, but whose land is across the border in Srinagar, is both angry and cynical when asked about the incident. “A hundred tractors with sand pass from here every day through the day and night. This time an issue was created because we refused to let the trucks pass this way . The people who do mining get away with it because they are in cahoots with the police. They bring the cops along when they come  to  threaten and abuse us. They gather a whole lot of rowdy elements and we have no choice but to withdraw.”

Illegal mining is a secret we love to play hide and seek with, in Bundelkhand. Of late, WhatsApp groups and local television news channels have been taking up the subject of illegal sand and stone mining frequently. Tractors carrying sand back from river banks are being seized , Facebook timelines are exploding with pictures of upturned trucks and villagers looking on curiously, but whether this action  will end differently, that is, have the desired result, remains to be seen. . These ‘raids’ make little impact in terms of the functioning of the  industry in overall terms –it is   more organised than many ‘legitimate’ occupations in Bundelkhand. The probability of similar action being taken on most contractors, who operate with the full support of the administration, is slim. This became  patently clear when after days of evasion and obfuscation, Ramvilas Misra, the district magistrate of Mahoba, finally addressed the press on the   Srinagar incident. He said  the issue was in the nature of a disagreement over the use of the fields as a thoroughfare

But what about the fact that the road was  being used by tractors for the purpose of carrying sand from the river, clearly illegally extracted, since there  are no valid tenders for sand mining operating in the area? Misra fielded the questions adroitly. “Since you have been publishing reports in the papers about overloaded trucks and invalid tenders, you will be surprised to know that Rs. 1.5-2 crore  have been recovered from those who are engaged in transporting the sand or doing illegal mining, by various departments in the district. The revenue, environment and forest departments are all working together on this matter.”   Misra has since been promoted  to the position of  mandal commissioner and has moved out to Banda, where he will   be safe from questions that keep getting harder to answer.

Suraj, a tractor driver whom  we interviewed soon after the incident in Srinagar, was not as lucky as Misra. We were waiting for him along the same route where the farmers had registered their protest a few days earlier.  Looking like  like a deer caught in the headlights of our line of questioning he said he did not know where the sand was coming from or what it was being used for. He did not know if the leases needed to extract the sand are valid or not. He also said the reason he was avoiding the main road and taking an inside, kachcha road was that a pipe had burst on the main road.

We hosted a Facebook live on this issue . A senior UNI correspondent, who has recently been reporting on how illegal mining is being intercepted in Mahoba, started off the discussion by remarking that the administration has never admitted to it.  But this isn’t some discreet operation, I say – can anyone spirit away’  a truck full of sand or 100 such trucks ? This is not possible without  the collusion of interested parties in the system. Be it the police, the administration or mining officials, they are all in the know of it.

The landscape around Urmil river on the Mahoba side has completely changed beyond recognition over the last couple of months and we have documented these changes. The entire area has been denuded of all vegetation. It looks more like a construction site. 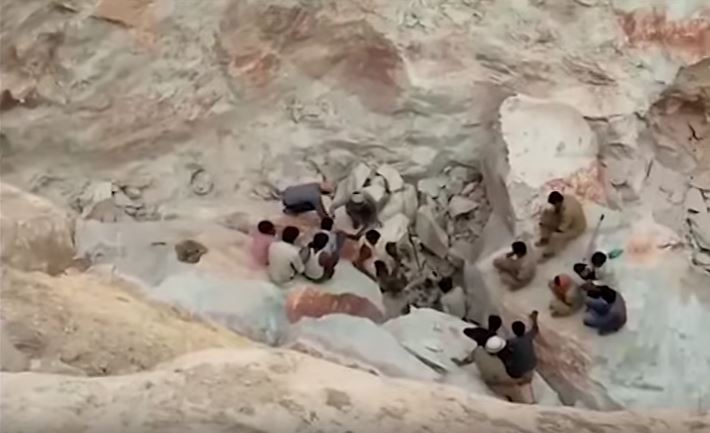 If there is the slightest resistance to these sort of mining related activities , it is nipped in the bud. The mining mafia dominates and there are few who dare to speak out against them. One late evening we interviewed Khemchandra, one of the farmers who had attempted to oppose the passage of tractors transporting sand and he told us fearfully, “When you try and resist them, they say they have government-approved contracts and leases and will not leave before taking the sand and that no one is going to take any action on them. They come with the pradhan and his men, who speak on their behalf. They’re moneyed and powerful, so you stop resisting them.” Farmers in the area say the nexus includes elected representatives too.

The most pertinent question is this: what happened to the Uttar Pradesh government’s promise of tackling the breakdown of law and order? Taking stringent action against the mining mafia and the dacoits of Bundelkhand was declared a priority of the state government only a year ago. In May 2017, Adityanath’s cabinet raised the fines for illegal mining from Rs 25,000 per hectare to Rs 5 lakhs along with five years in jail.

Sometimes I wonder, if the Urmil river could speak, what would it have to say about the pronouncements that have not been acted upon?

Khabar Lahariyais a rural, video-first digital news organisation with an all-women network of reporters in eight districts of Uttar Pradesh.