An engineering student was picked up, tortured and killed by the Kerala police even though there was no evidence against him 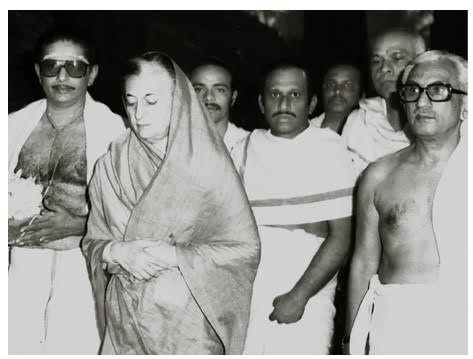 It was one of the most notorious cases of the Emergency and became a byword for police brutality in Kerala and excesses in general. It became the subject of books and even a film, Piravi by Shaji Karun. The case of P. Rajan — an engineering student who was picked up by the police for a crime in which it was easily verifiable he had no role and then tortured and killed showed the depths of State brutality during a period when civil liberties were suspended and the media was censored.

It was the long and lonely struggle of T.V. Eachara Warrier — Rajan’s father — that brought out the truth behind his son’s disappearance after he was taken away by the police on March 1, 1976. Rajan’s body was never found. But his father’s spirit was so unrelenting in the pursuit of truth that, although the police denied all through having taken the youth into custody, the High Court of Kerala, in its order in April 1977 in a habeas corpus petition filed by him, said there was sufficient evidence before it to believe that this indeed had happened.

“Why are you making my innocent child stand in the rain even after his death? I don’t close the door. Let the rain lash inside and drench me. Let at least my invisible son know that his father never shut the door,” Warrier, a retired Hindi professor, writes in his book, ‘Memories of a Father’, describing why he could not give up his struggle until the police admitted they had killed his son.

Civic Chandran was among the detainees at the Kakkayam torture camp with Rajan. Apparently, Rajan just did not survive the torture. Warrier, in his book, says his son was with a youth festival team from the college the night the Naxalites attacked a rural police station (at Kayanna, in Kozhikode district), taking away a rifle and causing some vandalism. This fact was easily verifiable from the other students in the team. It was on suspicion of his involvement in this attack on February 28, 1976, that he was taken into custody by the police on March 1. The arrest occurred in the front yard of the Regional Engineering College (which is now a National Institute of Technology) at Chathamangalam, in Kozhikode district. He was stepping out of the college bus bringing back students who had participated in an inter-collegiate youth festival in another college, located about 40 km away, when they took him. “They just took him, tortured him and killed him. That was all that happened. Somebody gave the police a list and they picked up people from that list,” says Warrier in his book.

The 1977 elections and the lifting of the Emergency witnessed the Congress-led coalition virtually sweeping the Lok Sabha and Assembly seats in Kerala, in stark contrast to the anti-Emergency rout the Congress suffered in the nation as a whole. “We in Kerala have never been politically literate,” says writer, political analyst and a former Naxalite, Civic Chandran, who was among those put in ‘Hitler-like concentration camps’ by the government during the Emergency days.

According to another former Naxalite leader K. Venu, hardly anything about the excesses that were going on in the State in the name of Emergency reached the general public because of a total censorship of the media to which the media succumbed without much resistance. He narrates a story about how, while he was hiding from the police, he had gone to the then Deshabhimani editor P. Govinda Pillai’s house in Thiruvananthapuram one day. Govinda Pillai had just returned home from a meeting of newspaper editors called by the Chief Minister and was pleasantly surprised to see the visitor, because, he had been told at this very meeting by the Home Minister that the police had nabbed the much-wanted Venu too!

“That meeting, Govinda Pillai informed me, was called by the Chief Minister at the behest of the editors in the State. They wanted to tell him that it was becoming purposeless for the media since hardly anything happening in the State was being allowed into the pages…The Home Minister’s disclosure about my arrest to Govinda Pillai was the kind of information the government wanted to the media to print,” Venu said.

The main target of the crackdown against anti-Emergency forces was the Naxalites, because they were into direct action like attacks on police stations. A large number of RSS activists and most of the leftist leaders in the State too were put in jail, but spared violent handling by the police. “The then Deputy Inspector General of Police (Crime Branch), Jayaram Padikkal, was in charge of the crackdown operations. He had had training in scientific methods of crime investigation in Scotland Yard. But the devices he introduced in Kerala were the crudest imaginable,” Venu said, describing what had subsequently received much notoriety as the ‘uruttal’ method of interrogation. It involved the use of a long wooden rod, called ‘olakka’ in Malayalam, which is a traditional implement for pounding rice. The interrogators would place it across the thighs of the interrogated after forcing him to lie on a bench. Two heavily built policemen would use their weight from either side of the ‘olakka’ and roll it slowly up and down, up and down, till he fainted.

Venu said: “There would be no visible injury. But the entire length of your thigh muscles would be crushed into a jelly. They next day, they would not have to beat you. Just a gentle tap with a stick on the thigh would make you shriek out in pain.” K. Karunakaran, who was the Home Minister in the C. Achutha Menon government in the State during the Emergency period, became the Chief Minister after the 1977 elections, with the Congress-led coalition winning a three-fourth majority in the Assembly. However, he had to resign on April 25, 1977, exactly one month after coming to the post following adverse observations from the High Court of Kerala against him for giving false testimonies in the court as a respondent in the Rajan habeas corpus case. A.K. Antony became the next Chief Minister.