Modi Once Bowed in Respect Before Parliament. Now, He is Merely Stooping Low

The proceedings of the budget session, including passing of the Finance Bill without debate and the failure to take up the no confidence motion, were unprecedented and unreal. 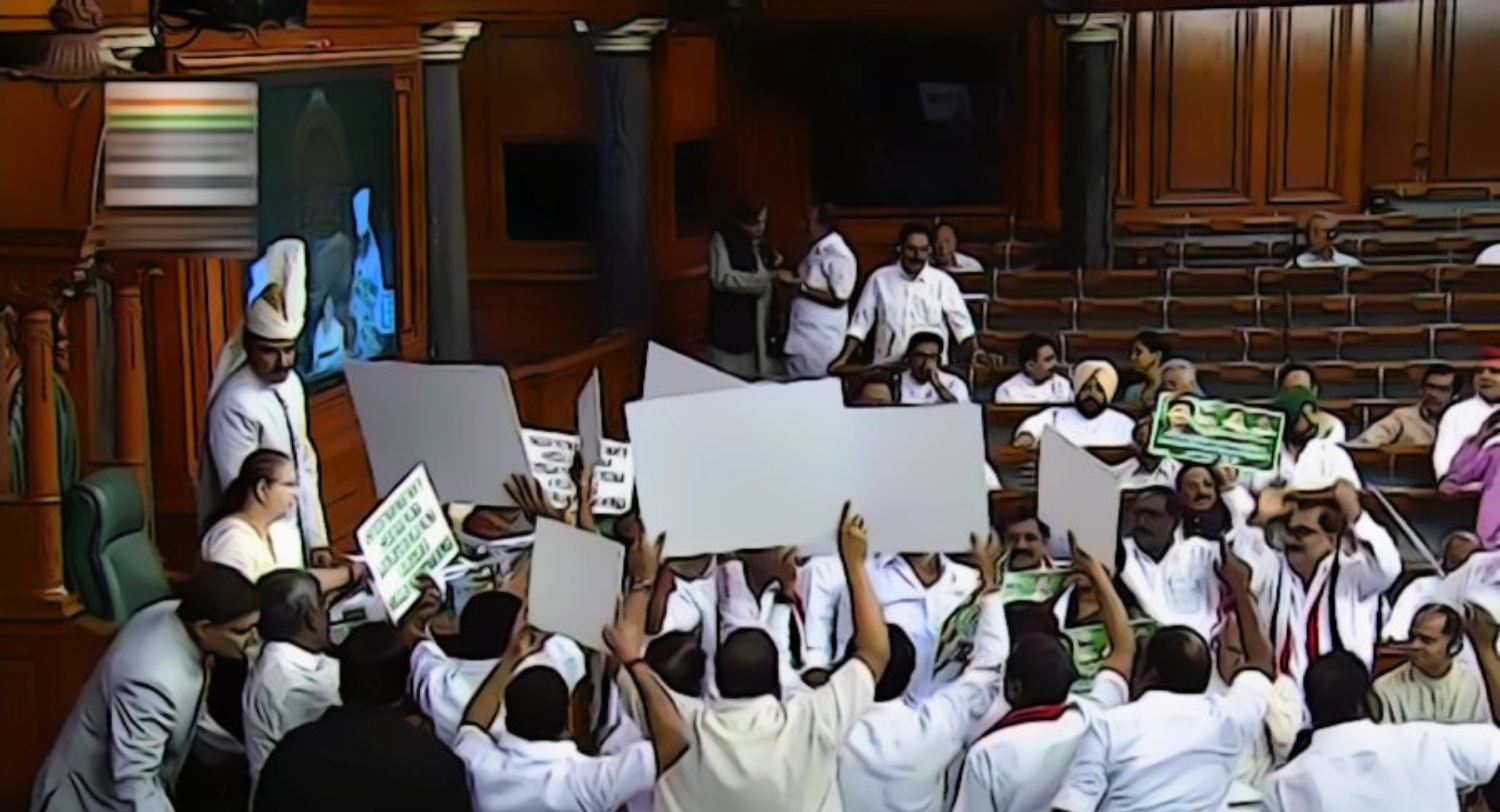 India is no banana republic. But, the way the parliament of the world’s largest democracy conducted itself in the just concluded budget session has left many wondering where things are headed.

After the virtual washout of the 22 day-sitting of the second phase of the session, the danger of this trend continuing till the next Lok Sabha polls a year away seems very high. And even more turmoil is in store. There are three sessions of parliament left till the next elections scheduled by May 2019.

In this phase of the budget session, the productivity in the Lok Sabha was a mere 4%, while in the Rajya Sabha it was 8%.

The fact is that nothing is going right. Those mandated to ensure that the Lok Sabha and the Rajya Sabha run smoothly are busy with their petty games and those elected to preside over these affairs are choosing to look the other way.

This sounds bizarre, but it is true. The Lok Sabha, for the first time in independent India, could not take up a no confidence motion against the incumbent ministry for more than three weeks. This at a time when in neighbouring Sri Lanka, parliament took up and disposed a similar motion against the beleaguered incumbent. Ranil Wickremesinghe defeated the motion in a tight vote.

Whatever the reasons, that this happened in the Indian parliament is a matter of shame and disgrace. What bigger tragedy can befall a nation boasting of a vibrant democracy?

Earlier, such opposition moves were eagerly faced by incumbent governments and the presiding officers thought it their duty to ensure that the house dispose them off as fast as they could. Governments earlier were seen ready to face such motions without any delay, promptly signalling that they were not afraid of the confidence test. All policy decisions were kept in abeyance if there was a delay in the disposal of such a motion by the Lok Sabha.

This time, all these norms were thrown to the winds, and it appeared that only the whims of the powers-that-be mattered completely. Strangely, this happened despite the absence of even a remote hint of a threat to the ruling dispensation. But moral courage is a different matter. That is why this budget session will go down in parliamentary history as one that witnessed a new low.

The talk in opposition circles was that the prime minister wanted to avoid like the plague any discussion on the Nirav Modi scam, the Dalits issue, the CBSE leak and the host of problems that faced his dispensation, which has looked far from ship-shape. Narendra Modi was additionally worried what signals his allies attacking the government would send to the people at this stage when BJP president Amit Shah has already begun the fight for 2019.

That some sections of the BJP, especially its Dalit members, were stirring in protest is clear from the statements of MPs like Savitri Bai Phule, Udit Raj and Chhote Lal. The silence of several other members of the party does not necessarily mean all is well, especially in the wake of a series of defeats the BJP faced in by polls in a number of states.

Agitating AIADMK members provided the fig leaf for the government to avoid any debate. Opposition leaders have time and again expressed suspicion, wondering why the Lok Sabha Speaker failed to take disciplinary action against them as she had earlier done against several opposition members, especially from Congress.

No confidence motion, the Brahmastra

No confidence motions are not new to the parliament. The Lok Sabha has witnessed 26 such motions so far. The government of the first prime minister Jawaharlal Nehru too had happily faced the test a few years after independence.

This time, if someone felt ‘no confidence’ against the ‘no confidence motion’, her feelings are not misplaced. The prime minister did not utter a single word on the issue despite much turmoil in parliament. And that means there is a serious crisis in the current parliamentary system.

What can a presiding officer do in such a circumstance? Trot out the alibis given by the powers that be? Be genuinely beholden to the high offices they hold?

The rules for a no confidence motion that is brought before the House are clear. You cannot stay in power a moment longer than you enjoy a majority and that is the essence of Indian democracy. All members of the house have the constitutional right to move a no confidence vote against an incumbent government if they genuinely feel that some issues need to be raised and the government must be called to account, despite knowing fairly well that the ruling party has the numbers.

The no confidence motion was and will remain the ‘brahmastra’ – the ultimate instrument of the opposition in parliament. The presiding officer has virtually no say except to ensure that a minimum of 50 members back the move. There are no discretionary powers given to the chair in this matter.

Former secretary general of the Lok Sabha P.D.T. Achary rightly remarked that the failure to take up the motion was “unprecedented and unreal”. His statement was prompted by the fact that such a bleak scenario has not been seen in the Lok Sabha before. Consistently faced with the excuse that there was no order in the House, opposition MPs at times even held ‘numbers’ as placards to show that they could muster more than 10% of the Lok Sabha in support of the motion. All these are things unheard of till now.

Passage of the Finance Bill, which marks the conclusion of the budgetary exercise, was done this time without discussion and amid din – an unprecedented move. Why is there so much hurry to wind up all the good things that have been assiduously built over the past 70 years for the magnificent temple of democracy? Or do they want to imply that nothing was done in the last 70 years? Or was it an attempt to impose the Gujarat model here? Questions abound.

Building bridges with the opposition

Whatever may be the charges the government managers raised against the opposition, the blame to be apportioned to the ruling side has to be much more. The announcement that the BJP-led NDA MPs would not take their salary for the nearly two dozen lost days does not absolve them of any blame. Willingly or unwillingly, they were tools in the hands of the floor managers of the ruling side to ensure that the house does not take up the no trust motion.

What was more worrying and a cause for concern was that there appeared to be no genuine attempt to build bridges with the opposition. The prime minister is also the leader of the Lok Sabha and it his duty to hold a genuine dialogue to resolve an impasse and ensure the house functions. Regrettably, this did not happen. Government managers have claimed that they held talks with opposition leaders, who took a dim view of the parleys, a signal that they thought the managers lacked authority.

Seeds of bitterness sown in 2014

The tragedy is that this Lok Sabha did not start on a good note. When it was formed in 2014, the prime minister could have been magnanimous and given ‘leader of the opposition’ status to the Congress, despite it lacking the adequate numbers. This would have been a confidence-building measure and set a good ambience. In parliament, as in politics, gestures matter.

When the parliament compound was attacked by terrorists in 2001, Sonia Gandhi was the first to call up the prime minister to enquire about his safety. This prompted Atal Bihari Vajpayee to say later that in a country when the leader of the opposition is concerned about the well being of the chief executive, democracy can have no threat. This was nearly 20 years ago.

Government managers have claimed the failure to take up a no confidence motion first happened at the fag end of the last Lok Sabha, when ruling party members from Andhra Pradesh repeatedly gave notices for such motions but to no effect. Congress leaders dispute this saying that those who made such demands were at no point anywhere near the 50-mark and therefore the attempts were infructuous.

A silent section in the BJP, including a few senior leaders are of the view that it was the duty of the prime minister and the speaker to resolve the current  impasse in parliament, implying that they had failed in the task. While no one in the ruling dispensation dares speak a word in public on the issue, history will not absolve the prime minister and the speaker for failing in their duty.

As he stepped into parliament for the first time in May 2014 as prime minister-designate, Modi had bowed, with his forehead touching the stairs, to register his high respect for the “temple of democracy”.

The real extent of his respect for parliament is now apparent, to put it mildly.