Separately, women MPs from the BJP, including Union ministers Nirmala Sitharaman and Shobha Karandlaje, held a protest in the Parliament Complex against Adhir Ranjan Chowdhury's remarks. 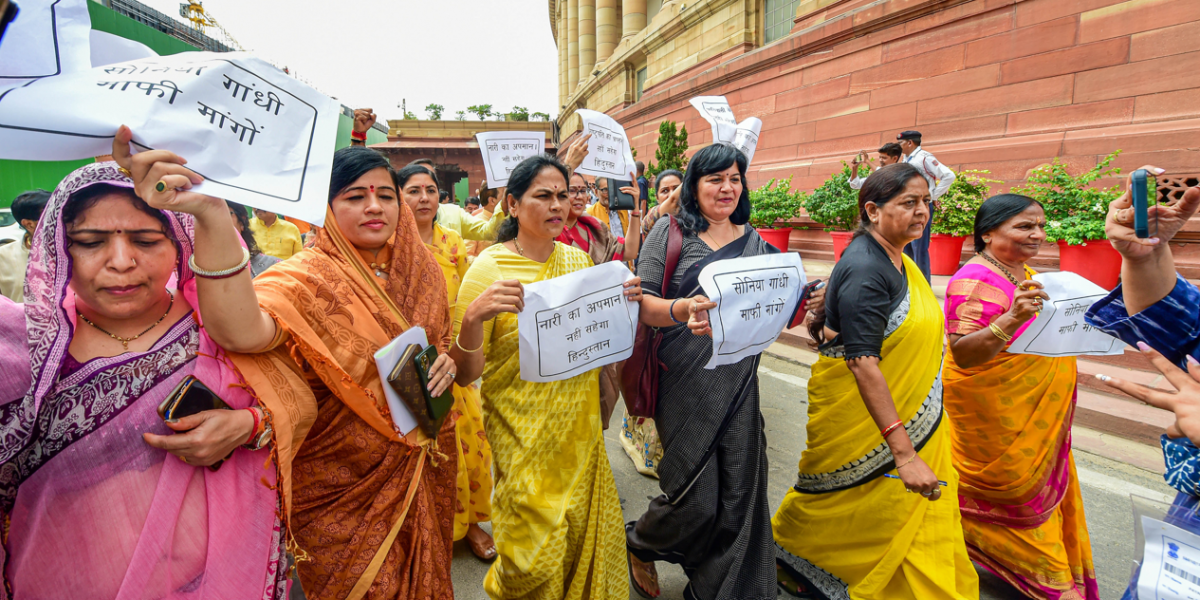 As soon as the House met at 11 am, Union Minister Smriti Irani accused Chowdhury of disrespecting Murmu by calling her ‘Rashtrapatni’.

Irani claimed that Chowdhury has disrespected the entire tribal community, women, poor and the downtrodden by his remark.

Irani further said that Murmu has become the target of hatred of the Congress as the Opposition party could not digest that a poor tribal woman has become the President of the country.

“Sonia Gandhi sanctioned the humiliation of a woman at the highest constitutional office in the country,” she said.

Irani further said that such humiliation of Murmu will not be tolerated by the poor, tribals and women of the country.

Union finance minister Nirmala Sitharaman called it a “deliberate sexist abuse” and demanded that the Congress president apologise on behalf of the party, NDTV reported.

“I demand an apology from the president of Congress party who herself is a woman has allowed her leader to speak like that. Sonia Gandhi should come before the nation and apologise for insulting the President,” the finance minister said in the Lok Sabha.

Separately, women MPs, including Sitharaman and minister of state for agriculture Shobha Karandlaje, held a protest in the Parliament Complex against the Congress leader’s remarks.

Madhya Pradesh chief minister Shivraj Singh Chouhan told ANI: “A President is above all party lines. This is an insult to women and the tribal community at large. The Congress party espouses such anti-woman and anti-tribal views. The nation would never forgive Adhir Ranjan Chowdhury.” 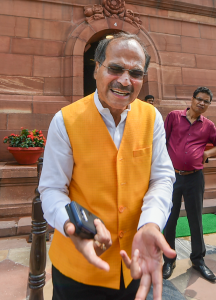 According to News18, the row kicked up after a video of Chowdhury surfaced in which he could be seen calling President Murmu “Rashtrapatni.”

Chowdhury, who is leader of the Congress in the Lok Sabha, said that he never intended to disrespect the President of India. He added that it was just a “slip of the tongue.” He also accused the ruling BJP of making a mountain out of a molehill.

“I can’t even think of insulting the president. It was just a mistake. If the president felt bad, I will personally meet her and apologise,” he told ANI.

In a video statement posted on his Twitter account, Chowdhury said: “Whoever is the President of India, be it Brahmin, or Adivasi, the President is the President for us. Our respect is for the post. Yesterday when we were protesting at Vijay Chowk, reporters asked us where we wanted to go. I told them I want to visit the President’s house. Just once, I said “Rashtrapatni”…The reporter repeated it to me and I said I might have said that by mistake and it would be better if they didn’t broadcast it. They (BJP) are creating a furore because of this. I made a mistake, just once and in one word.”

The President is called “rashtrapati” in Hindi.

Later in the day, when the media asked Congress interim president Sonia Gandhi about Chowdhury’s ‘Rashtrapatni’ remark, she said that he has already apologised.

The chain of events

Meanwhile, as per reports, Congress has accused BJP MPs of ‘heckling’, ‘intimidating’ and ‘verbally assualting’ its president Sonia Gandhi inside Parliament.

According to Hindustan Times, Gandhi walked across to the Treasury benches and sought to know from BJP member Rama Devi why she was dragged into the issue. She tried to explain that Chowdhury had already apologised for his remarks and that the BJP should not drag her name into the controversy. However, the BJP insisted that the Congress chief apologise for her MP’s remarks.

“Just as she was returning, a group of BJP women MPs, including Smriti Irani, shouted at her and said that she should also apologise for the remarks against the President… At that point, Gandhi told Irani not to speak to her,” a person present during the verbal exchange told the newspaper.

After Gandhi’s comment, some BJP lawmakers raised their voices.

“Opposition MPs, mostly women, then came and led Gandhi away, but the BJP side kept protesting,” the person cited above told the daily.

TMC MP Mahua Moitra, who was a witness to the verbal exchange, told the newspaper, “We got Mrs Gandhi out. They had all surrounded her and were shouting at her. How can a 75-year-old in a mask be intimidating to anyone?”

She further said: “(NCP’s) Supriya Sule and I were right there and there weren’t any Congress MPs around because the House had been adjourned. When we first saw Mrs Gandhi get up and walk towards Rama Devi, we were wondering where she was going. She was wearing a mask the entire time. She started saying something and Rama Devi got up and was talking to her.”

“Smriti Irani was behind Rama Devi and (Congress MP) Gaurav Gogoi was to her left. Suddenly, Irani comes from the back and starts saying something to Mrs Gandhi with her finger up. And then all of the BJP women came and encircled her. Nishikant Dubey (BJP MP) also comes over. So then, Supriya, Pratima Mandal and Apparupa Poddar walked over to that side. By that time, Adhir had come and was asking them to talk to them. The way the BJP was screaming was like a pack of hyenas, I have never seen anything like it. We were trying to take her out but she was saying, I am not afraid.”

Reacting to the incident, Congress leader Gaurav Gogoi tweeted: “Today we saw a very shameful behavior towards our leader Sonia Gandhi inside Lok Sabha. Objectionable slogans were raised against her. But being a fearless leader, Sonia Gandhi went to the women MPs, but BJP MPs behaved in a very ill-mannered way”

Today we saw a very shameful behavior towards our leader Sonia Gandhi inside Lok Sabha. Objectionable slogans were raised against her. But being a fearless leader, Sonia Gandhi went to the women MPs, but BJP MPs behaved in a very ill-mannered way: Congress leader Gaurav Gogoi pic.twitter.com/APsUlUJDOj

“Now we seek your intervention in the matter in sending the matter to the Privilege Committee as the unruly behaviour of those alleged members may warrant the suspension from the House,” the letter read.

.⁦@INCIndia⁩ MPs write to ⁦@loksabhaspeaker⁩ to complain against the “unsavoury and uncouth” treatment with Sonia Gandhi in the Parliament today. They have demanded that Birla suspend her pic.twitter.com/Ev0XoDKT8G

BJP members on Thursday held a protest in Manipur against the Congress MP’s remarks while describing the President.

Similarly, in Manipur, Bharatiya Janata Yuva Morchamembers shouted slogans against Chowdhury’s comment and burnt an effigy of Sonia Gandhi at the gates of the party’s headquarters.

Separately, the members of the Indian Youth Congress (IYC) also staged a protest outside the residence of Irani over her alleged “misbehavior” with Gandhi in parliament, PTI reported. Several IYC leaders and workers holding placards took part in the protest and raised slogans, a party statement said.

Published on July 28 at 12:52 pm, this story was republished on the same date at 5 pm with more updates on the issue.