In Ram Vilas Paswan, the Compulsions of a Career Politician Robbed India of a Great Leader

Other socialist politicians from Bihar trod the same path he did – especially George Fernandes and Nitish Kumar. But in Paswan, the gap between what could have been and what he eventually became was arguably the greatest.

Ram Vilas Paswan being sworn-in as a Cabinet minister by President Ram Nath Kovind during the oath taking ceremony at the Rashtrapati Bhawan in New Delhi on May 30, 2019. Credit: PTI/Vijay Verma

Ram Vilas Paswan, who passed away, last week, was a steady fixture in north Indian politics for over three decades. That he could never scale greater heights was due to his vaulting ambitions that saw him trade the socialist politics of his youth for the comfort of alliances that kept him in power even at the cost of the social justice ideology he once so passionately championed.

To be sure, other Bihar politicians trod the same path – especially George Fernandes and Nitish Kumar. But in Paswan, the gap between what could have been and what he eventually became was arguably the greatest.

As a leader of the poor and downtrodden, Paswan was a star in India’s political firmament much before Mayawati arrived and even before her mentor Kanshi Ram’s entry. He was destined for greater things but at some point, he allowed himself to be slotted as a ‘Dalit leader’ – and later just a Paswan (Dusadh) leader – whom the big establishment parties wooed only because of his ability to swing a certain number of votes their way.

Paswan’s career can be broadly split into two uneven halves: 1969 to 1999 and again from 1999 to 2019. From being a young Samyukta Socialist Party (SSP) MLA in 1969, to winning the Hajipur seat in 1977 as Jayaprakash Narayan’s hand-picked candidate with a record margin, to being a cabinet minister in V P Singh’s Janata Dal government, Paswan’s ascent was steady and solid. 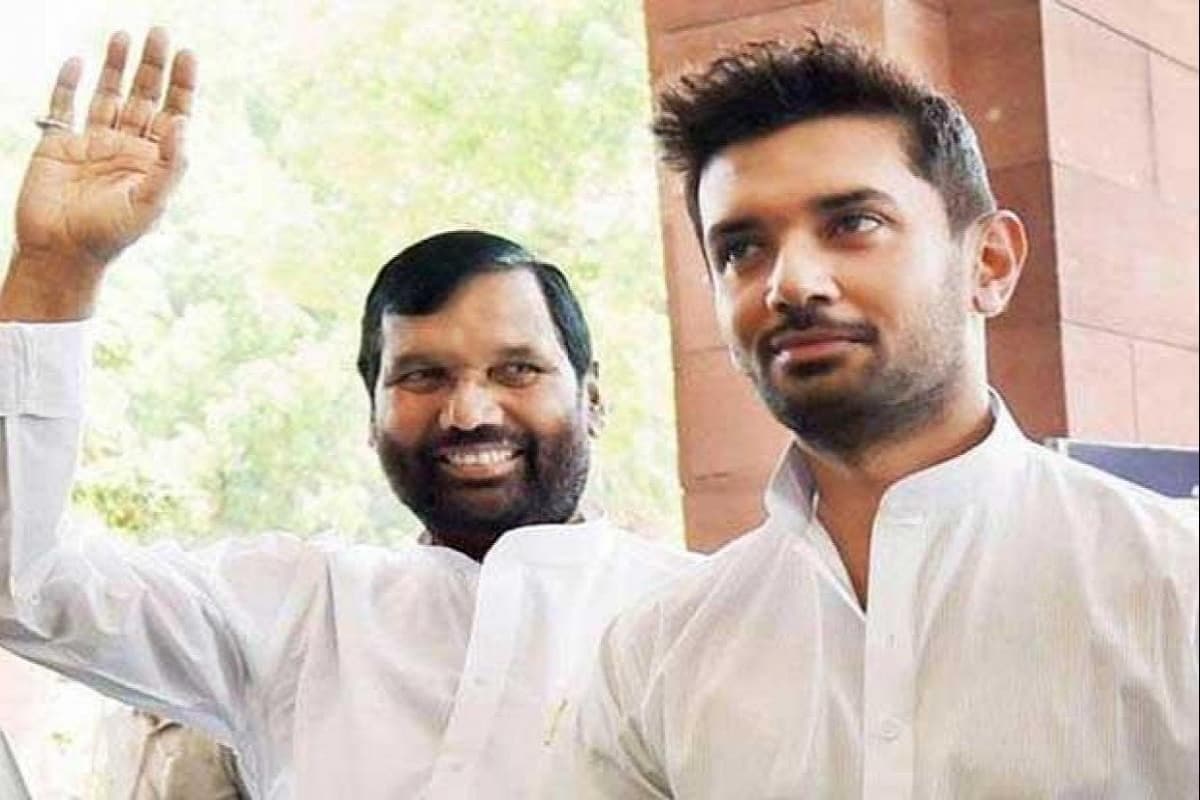 When Chandrasekhar, Devi Lal and Mulayam Singh Yadav split the Janata Dal to form a short-lived government with the Congress’ sbacking in 1990, it was clear the Janata Dal experiment had come apart—despite getting another shot at power in a much-weakened form in 1996.

By the mid-1990s, the leadership baton of the Janata Dal had passed from the likes of Chandrasekhar, V P Singh, George Fernandes and Ramakrishna Hegde to the still-young Paswan, Lalu Yadav, Sharad Yadav and the accidental prime minister, H.D. Deve Gowda. And the party’s catchment was primarily limited to the three states of Bihar, Karnataka and Odisha in 1996.

The fodder scam that shook up the I.K. Gujral government in 1997 would lead to a further split in the Janata Dal, with Lalu Prasad Yadav floating the Rashtriya Janata Dal (RJD) in response, soon to be followed by the formation of the Biju Janata Dal (BJD) in Odisha, ahead of the snap elections of 1998. That reduced the Janata Dal, having its base in a dozen states in 1989, to just the two states of Bihar and Karnataka.

Paswan’s decision to join the NDA ahead of the 1999 Lok Sabha polls, along with Sharad Yadav, happened through some unlikely manoeuvres before the Karnataka elections of 1999. This was after the Janata Dal (including Paswan) voted against Vajpayee in the fateful no-confidence motion earlier that year.

Ramakrishna Hegde, the rising Janata Party leader of the 1980s, who famously took on Rajiv Gandhi as the Janata Party’s candidate in India’s first televised campaign in the 1984 elections, had been expelled from the Janata Dal by president Lalu Yadav at bête noire Deve Gowda’s insistence in 1996, and was looking for an opportunity to get back at Gowda.

Hegde, in cahoots with his one-time protégé J.H. Patil, whose government was on its last legs in Karnataka, along with George Fernandes, hatched a plan to bring all the three splinter Janata factions – the Samata Party of Fernandes, the Lok Shakti of Hegde and Janata Dal – together. Paswan and Sharad Yadav jumped at this opportunity and would get expelled soon but the Janata Dal’s fission was near complete then.

Ahead of the Bihar elections in 2000, the (unofficial) merger of the Janata Dal (United) would further come under a strain after Sharad Yadav insisted on being the merged entity’s president against the wishes of George Fernandes. Thus, the Samata Party and the Janata Dal contested separately in the elections that year in alliance with the BJP, resulting in Nitish Kumar’s first shot at Bihar chief ministership – which lasted all of a week. 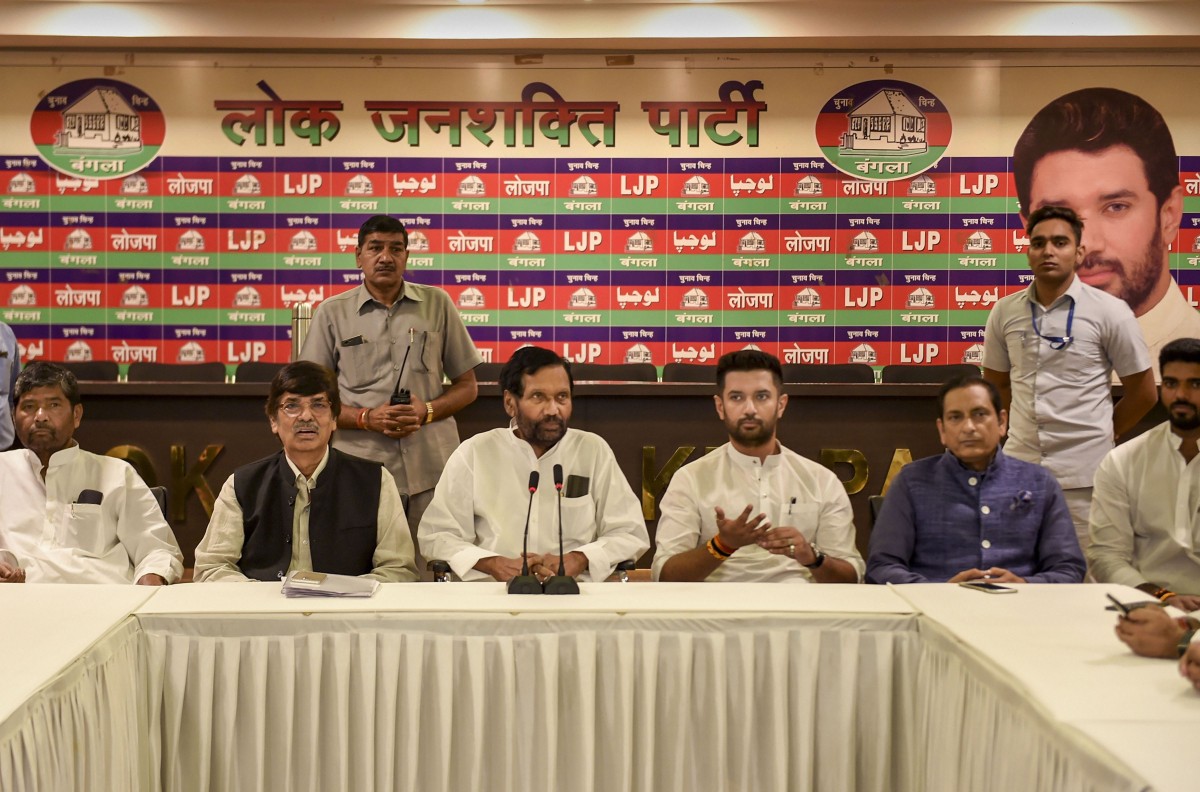 Paswan would soon break away and form his own Lok Janshakti Party (LJP) by the end of 2000, long before the Janata Dal–Samata Party merger materialised formally in 2003. Paswan was supposedly encouraged by the success of Mayawati in neighbouring Uttar Pradesh and fancied his chances of getting the 16% Dalits of Bihar to rally behind him (along with Muslims) to emerge as a rival of the entrenched Lalu regime.

But Paswan’s calculations went awry despite performing creditably in the first of the two elections in 2005 following a hung verdict. Paswan made a strange demand to install a Muslim face as chief minister in return for his support but his mandate dissipated quickly in the elections that followed later that year, giving the Janata Dal (United)–BJP combine a clear majority. Paswan had exited the Vajpayee government in May 2002 citing the Godhra riots as the ostensible reason, although the real reason was the BJP’s decision to back Mayawati in Uttar Pradesh towards the end of April 2002.

Paswan’s intransigence following the first election in 2005 was despite the fact that his party contested the 2004 general election together with Lalu’s RJD and the Congress, the alliance sweeping the polls in Bihar. And that was facilitated by Sonia Gandhi’s famous stroll across her 10, Janpath residence to her neighbour Paswan to convince him to join the United Progressive Alliance (UPA) ahead of the elections. Paswan’s LJP would never recover from the events of 2005 and his star was on the wane after that.

Ahead of the 2009 general election, Lalu’s RJD along with Paswan and Mulayam Singh Yadav’s Samajwadi Party floated an ill-advised ‘Fourth Front’ that came a cropper, ensuring that neither Lalu nor Paswan would figure in the UPA-2 cabinet. Paswan even lost the Hajipur seat to his old rival, fellow Dalit and former Bihar chief minister Ram Sundar Das, and had to find his way back to parliament through the upper house.

After being in the political doghouse for five years, Paswan had to do something radical to get back into reckoning. Fearing oblivion, Paswan did the unthinkable: joining hands with the Narendra Modi-led NDA –  the same Modi under whose watch the gujarat riots took place and the issue on which Paswan had apparently quit the Vajpayee Cabinet.

Like many socialists before him, Paswan’s political journey had turned full circle, from the Left to the Congress and to the far-right represented by Narendra Modi. “Barah saal me yug badal jaata hai” (an era ends in 12 years), Paswan remarked, to justify the volte-face. Somewhere along the way, his idealism fell by the wayside; or perhaps, it was the compulsion of a career politician to stay the course than just fade away.

Either way, one thing is clear: If Paswan’s politics in the first 30 years from 1969 to 1999 was all about fighting the entrenched power centre frontally, the last two decades of his career saw him aligning with the ruling party to stay in office. From being a leader with a pan-India or at least a Hindi heartland  following,  Paswan ended up becoming just the undisputed leader of the 4.5% Dusadh (Paswan) community in Bihar.

The rest of the Dalit population in Bihar had become votaries of Nitish Kumar after his social engineering formula of 2007 of getting together 21 Dalit communities (leaving out only the Dusadhs) under the category of Mahadalits. Paswan’s son, Chirag, seems to be making amends already on this front with his ‘Bihar first’ campaign but it will be a tall order for the greenhorn politician to turn the strategy around quickly.

The demise of senior Paswan leaves one with the ‘what ifs’ and the myriad possibilities that a politician of his stature could have utilised to realise his true potential.

Anand Kochukudy is a Kerala-based journalist and former editor, The Kochi Post.