At a time when political actors are seeking to replace Ambedkarite ethics with the Hindutva doctrine, it is pertinent that Dalits make an ethical choice between Hindutva and Ambedkarite politics.

Ram Nath Kovind on his way to Delhi. Credit: Governor of Bihar website 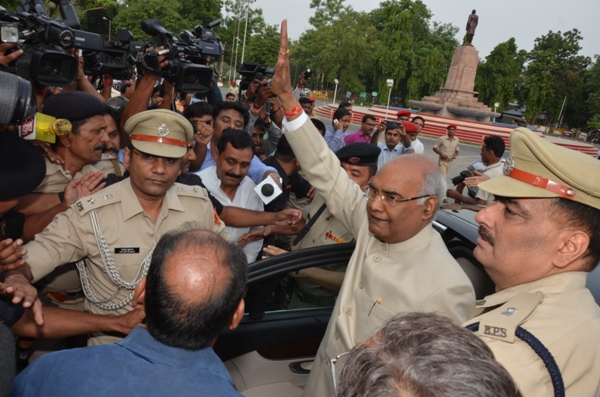 Umberto Eco, in his study on semiotics, suggests that signs and symbols can be used to lie. To justify our authenticity, we showcase certain signs that are nothing but a lie. For example, an unskilled person who impersonates as a pilot will be extremely dangerous for the passengers. Similarly, a stooge who pretends to be working for the general good, only serves the interests of his real master. Ram Nath Kovind, the BJP’s candidate for the post of India’s 14th president is also a false signifier of the Dalit identity. There is visible pretentiousness, falsity and manoeuvring implied in the choice. It has no bonding to the idea of Dalit emancipation, its historical trajectory and the churned Dalithood.

The BJP has a Machiavellian approach to the Dalit question. It makes distinction between the social and the political in the most rational way. The RSS and the BJP understood well that the contemporary social and economic conditions of most Dalits are precarious: burdened with poverty, marginalisation and exploitation. However, emancipating Dalits from such abject conditions has never become the focal agenda of the nationalist party, as this will disturb their heightened claim to register India as an ancient glorified land of Hindu unity and prosperity. The typical liberal-bourgeois method of showcasing community emancipation through token political representation comes as a handy solution to the BJP.

The BJP has not applied any ethical principles in choosing Kovind as a Dalit face for the post of president. It is obvious that the choice is a clever manoeuvring of crucial political identities or a cunning application of social engineering for electoral benefits. Kovind, thus, represents the forceful entry of new ‘Hindu Dalit’ category to disturb and devalue the historically churned revolutionary category of Ambedkarite Dalits. It is crafting an ‘Ambedkarite versus Hindutva’ binary to signify that the Dalit masses are disillusioned from caste-based identity politics and cautiously choosing nationalist platform for their emancipation.

A Dalit’s refusal to adopt the Brahmanical social order makes him a self-realised person, engaged in the battle for social transformation. His communitarian reflexivity provides him a meaningful existence and an ethical cause. They are fighting the hegemonic Brahmanical gaze that hampers a Dalit’s functioning as a free, equal and responsible citizen. The independent Dalit agency is antithetical to the Hindu conservatism and its upper caste hegemony over all the institutions of power.

His political vision, therefore, endorses a political program that offers secular polity, institutions with value of social justice and a state with welfare economy. Only under such progressive political milieu, is a complete emancipation possible. Ambedkarite Dalits represent the moral claims of the socially deprived sections to be recognised as dignified and equal subjects.

The autonomous Dalit-self does not shy away from its particularistic ideological staunchness against Brahmanical Hinduism and celebrates it as a value generated out of their everyday socio-political experiences. It argues that the empty universal appeal of samajik samrasta (social harmony) by the Hindutva ideologues often veils the substantive political concerns and socio-economic problems of the Dalit masses. Ambedkarite politics endorses the need of an ideological struggle against such regressive traits, which never take up the issues of caste atrocities, rapes against Dalit women and caste discrimination in work places. To liberate the country from the exploitative Brahmanical-Hindutva hegemony, Ambedkarism becomes a revolutionary manifesto for all the oppressed sections of the society. Historically, this Ambedkarite ideological force has produced robust socio-political struggles to liberate the Dalit-Bahujan subjects from the ‘slave Hindu mentality’. The RSS is well aware of the challenge the Dalit consciousness creates in public discourse.

The RSS is working hard to keep Dalits away from Ambedkarite movements and politics. It examines the limitations and incapacity of Dalit movements in reaching the masses. The absence of Ambedkarite socio-political movement at the local levels makes it easy for the RSS to mobilise Dalits. The RSS has identified that the Ambedkarite political consciousness has effectively served and empowered certain major castes (Mahars in Maharashtra, Jatavs in UP, Malas in Andhra Pradesh) while leaving many other Dalits groups in their original deprived condition. The RSS has targeted these Dalit sub-castes for their political agenda. It is the mobilisation and communalisation of ‘the Maha-Dalits’ that the RSS-BJP has planned to counter.

In RSS’s reinterpretation of Ambedkar, he is visualised as a Hindu reformer and an anti-Muslim ideologue. An influential section among Dalits has internalised the right-wing socio-political culture and endorses the guidelines prescribed by the social elites. They act not only as the assistants, activists and flag-bearers of Hindutva ideologues but also endorse its supremacy. The right-wing Hindu Dalit is comfortable in associating himself with the upper caste ‘other’ and looks upon his own fellow Ambedkarite adherents as an unconscious lot. He imitates the political language and behaviour of the RSS and adores the organisation for offering an inclusive space. Those associated with the BJP’s ideology are now celebrated as part of a greater Hindu brotherhood, nationalists and participants in the economic prosperity of the nation. Prominent Dalits leaders like Ram Vilas Paswan, Udit Raj and Ramdas Athawale are often placed in public discourse as the new flag bearers of Hindutva ideology. This is the new normal that the Hindutva brigade wishes to create of the contemporary Dalit identity.

The independent Dalit agency is distinct and critical to the offered subjectivity of the ‘Hindu Dalit’ under the right-wing umbrella. In contrast, the current Dalit identity is emerging through nuanced public protests. It achieved its wider significance by building massive mobilisations against the existing Modi-regime, especially in the last two years. The massive movement of Dalit students in the University of Hyderabad against the institutional murder of Rohith Vemula last year became an iconic struggle. Some months later, the Dalits of Gujarat, under the leadership of  social activist and lawyer Jignesh Mevani, mobilised in large numbers against the inhuman flogging of four Dalit men by the criminal brigade of gau rakshaks. Very recently in Saharanpur, Uttar Pradesh, under the leadership of the Bhim Army, Dalits refused to succumb under the violent attack of the upper caste elites. They protested the inaction of the state government by mobilising a vast population in the heart of the national capital. Apart from such mass mobilisation and media glare, small and local groups across the country are building independent struggles against caste atrocities and violence. Numerous Dalit NGOs, cultural fronts, cooperatives, faith-based organisations and other self-motivated organisations are creating their own alternative socio-cultural symbolism against Brahmanical values. Also multiple intellectuals, social activists and students are propagating Ambedkarism without fear on print, visual and social media.

These spatially fragmented but ideologically connected groups across the country are creating an alternative signifier of Dalit identity today. Away from the battle for political power, it is the social turf where the Ambedkarites are building their movements for social justice and self respect. These mobilisations are diverse, autonomous and without a central authority that can regulate it. However, these struggling people (mainly the Ambedkarites) hardly become the symbol of Dalit consciousness. Very often the mainstream media (including certain Left intellectuals) promotes the right-wing Dalit appointees as the new representatives of the community and as a defining symbol of Dalits’ transforming consciousness. It is promoted that the Ambedkarite movement is losing the battle against its Hindutva aggressors in the absence of a strong and able leadership, lack of organisational infrastructure and its failure to offer effective ideological guidelines to other non-Dalit oppressed communities (mainly Muslims).

One can accept that the Ambedkarite movement is struggling to become a significant force as a political alternative to the BJP. However, I think that on the socio-cultural front, this is the only ideological alternative that is combating Hindutva’s cultural fascism in the most potent way. It is the power of Dalit social struggles and its critical ideological engagement that has forced the RSS-BJP to play a Dalit card in mainstream politics.

An Ambedkarite acts as a free person – self-realised and ready to impose the burden of social transformation as a rational conscious being. He is a revolutionary, accountable to the social cause and obedient to the promises made by the Ambedkarite Dalit movement historically. This is an act of positive freedom, engaged self-consciously to a utilitarian political activity. This is an ethical act to have freedom from the casteist-Brahmanical servitude. Under the consideration of such principles, away from political manoeuvring, Dalits are struggling against caste atrocities, economic exploitation and feudal violence. It offers a signifier radically different from the Hindutva one. The BJP’s take on the Dalit question stands in complete opposition to Dalit ethics as it champions communal politics, criticises the institutional practices of social justice as appeasement of Dalits and has adopted neo-liberal guidelines for economic development. At a time when political actors like Kovind are challenging Ambedkarite ethics, wanting to replace it with the Hindutva doctrine, it is pertinent that Dalits should make an ethical choice between Hindutva and Ambedkarite politics.