Past Continuous: How the Kalyan Singh Government Aided the Ram Mandir Movement

This is the second of a two-part series. Read part on here.

By taking no steps to prevent the demolition of the Babri masjid, Kalyan Singh as chief minister of Uttar Pradesh neither upheld constitutional obligations nor did he enforce judicial directives. Paradoxically, six-and-half years earlier on February 10, 1986 as president of his party’s state unit, he demanded action against Muslim leaders who refused to accept the judicial verdict that led to the contested shrine being unlocked for Hindu devotees. Singh’s statement was ironical because the party consistently argued thereafter that many aspects of the imbroglio was not open to judicial scrutiny.

Almost midway in the thirty seven month period which separated Shilanyas and the demolition of the Babri masjid, Kalyan Singh took oath as chief minister of UP on June 24, 1991. This followed elections to the vidhan sabha, held simultaneously with those for the tenth Lok Sabha, at the conclusion of which L.K. Advani made one of his famous quips: the victor came second.

Also Read: Past Continuous: The Birth of the Ram Mandir Agitation, a Ticking Communal Time Bomb

In UP, on the strength of the Ram lehar or wave generated in the wake of Advani’s rath yatra in September-October 1990 and subsequent resignation of the V.P. Singh government, the BJP won 51 of the 85 Lok Sabha seats in UP. With 32.79% of vote share, it was a clear leader over Janata Dal and Congress whose vote shares hovered between 17-18%.

In the state polls, the BJP almost secured a clear majority on its own – 221 of the 425 seats. Its vote share too was similar, at 31.45%. The one point dip was due to the party leaving ten seats for smaller parties and independent candidates who supported it. Ever eager to link its electoral inroads to rising acceptance of its divisive agenda, the then president of the party, Murli Manohar Joshi, proclaimed that the victory in the assembly polls was a “mandate to build the Ram temple”.

Kalyan Singh, selected to be the chief minister, did not first swear allegiance to the constitution and rule of law. Instead, he visited the disputed shrine-structure in Ayodhya. With Joshi by his side, Singh had a darshan of the idols which were surreptitiously installed in December 1949. Thereafter, he made public his “promise to Ram lalla” (idol of the child Ram) that his government would facilitate the construction of a resplendent temple. The contradiction was not lost on anyone: in two separate pledges he promised to uphold the nation’s holy book and simultaneously committed himself to extra-judicial means for building the temple.

The Centre, headed by P.V. Narasimha Rao, guided by it minority status, weakly queried how Singh proposed to “slowly remove all hurdles in the way of the Ram temple”. The BJP leadership declared that the Ayodhya issue “from being a subject of agitation, had become part of the governments’ (both the state and Union government) democratic responsibility”.

New Delhi accepted the state government’s assurance on face value: it would act within the parameters of law and take no unconstitutional step. The die was cast and it was evident that Rao had little political will to prevent the Babri masjid’s demolition. Thereafter, it merely paid lip service to maintaining status quo of the site as directed by Allahabad high court.

By early 1992, the state government began making steady progress in handing over the disputed shrine and the land around it to the VHP.

Yet, the BJP was aware that it could not trigger a crisis and that it was necessary to rein in aspirations on the temple. The fervour of its supporters had to be deflected, which began when Joshi’s ‘Ekta Yatra’ from Kanyakumari to Srinagar was announced to underscore that it was not a single-issue party. The objective of the programme was to hoist the Indian tricolour in Srinagar on Republic Day in 1992, when the Indian flag was much denounced in the valley. Narendra Modi, then a little-known party functionary in Gujarat, was nominated to coordinate the yatra. It was the first time he came into national focus.

UP government continues its efforts

Meanwhile, Singh’s government continued its efforts to build the temple. In an effort to secure sizeable areas around the disputed structure, the VHP, using various levels of persuasion, acquired plots and buildings adjoining the masjid.

The state government also acquired 2.77 acres of land opposite the shrine, ostensibly to “promote tourism and provide amenities to pilgrims”. However, the real intent was to eventually transfer the land to the VHP Trust to start constructing the temple. The Sangh parivar believed that once construction was started outside the disputed shrine, the completion of the temple could not be prevented even in the event of a judicial verdict against it. 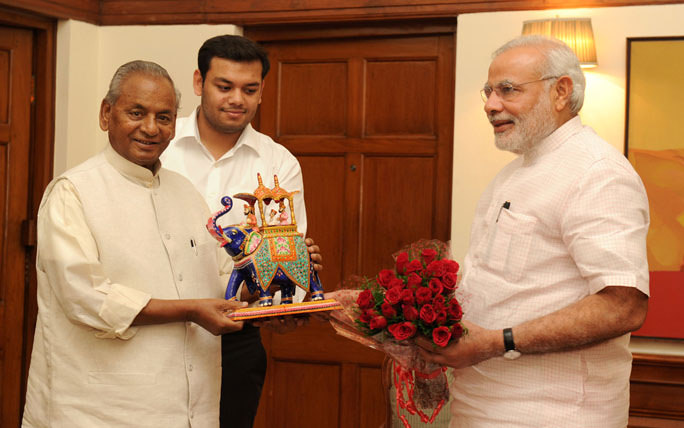 Singh’s deviousness became evident at this stage. The land acquisition was challenged in the Supreme Court and it ruled that the state government could neither transfer the land, nor build any permanent structure on it.

The UP government responded by demolishing the buildings on the acquired land, contending that the apex court barred construction, but was silent on demolitions. Within weeks, the entire area opposite the Babri masjid, a graveyard since 1855, was levelled. The Centre did not step in at this stage.

Emboldened, the VHP organised a function to mark the first anniversary of hoisting saffron flags over the masjid. It needs to be recalled that Advani’s yatra was launched to join VHP’s kar sewa programme and on that day, scores of aggressive Hindutva protestors broke through police cordon, entered the disputed shrine and hoisted these symbols of Hindu resurgence.

Also Read: The Babri Masjid Demolition Was Impossible Without RSS Foot-Soldiers Like These

By early 1992, the state government began making steady progress in handing over the disputed shrine and the land around it to the VHP. As part of the plan, it transferred 42.09 acres of land in the vicinity to the VHP Trust for a Ram Katha Park.

The VHP steps on the accelerator

Unhindered by either state or central governments, the VHP stepped on the accelerator – a new phase of kar sewa to begin in July was announced at the Ujjain Kumbh Mela. Although the plan was pushed back, there was no doubt that matters were slowly reaching flashpoint. Judicial strictures were violated with impunity, but there was no stopping.

In July 1992, VHP activists started laying a three-tiered concrete platform but contended it was not a permanent structure. This continued for more than a fortnight, but the Centre took no steps to stop construction. The state government provided every assistance to the VHP, while nights merged into day as thousands of karsevaks carried concrete from churning mixers to the accompaniment of loud speakers blaring bhajans set to tunes of popular Bollywood songs. Job done, karsevaks went back, only to await the next clarion call.

This was given by the pro-VHP Hindu clergy after a meeting in New Delhi on October 30. It was announced that the kar sewa programme would be resumed from December 6. The government carried on a charade of negotiations, but it was evident that the Rao government was riven by dissensions over the prime minister’s handling of the issue. He displayed little administrative clarity and political will on tackling the situation. 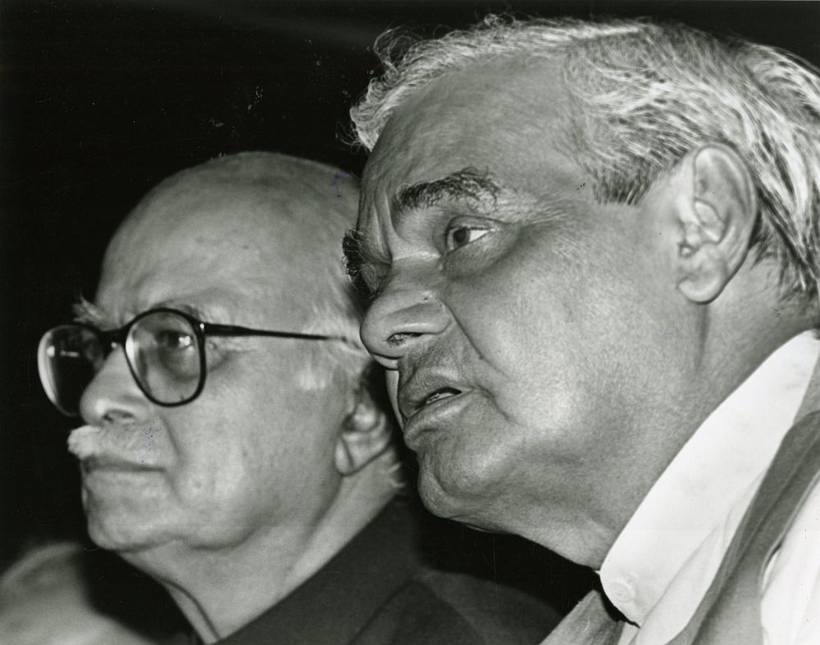 A.B. Vajpayee and L.K. Advani were among the BJP leaders who made provocative statements. Credit: PTI

In the weeks leading to December 6, the BJP leaders, including the troika of Advani, Vajpayee and Joshi, canvassed and made provocative declarations. Advani used the allegory that kar sewa would not mean only bhajan and kirtan, but would be done with bricks and shovels, while Vajpayee talked about zameen ko samtal karna hoga (the land would have to be flattened). The Supreme Court observed merely while the plan unfolded as expected.

December 6, 1992 was the RSS clan’s hour of triumph. The Ram temple issue patronised by it since 1984 had inched towards the final goal. Moreover, broader issues that surfaced during the course of the agitation had been cemented in the political agenda of India.

The assault on the political system, evolved after Independence, had been successful and the new order could not be wished away. Post events between 1989 and 1992, further rise of Hindu sectarianism, especially in the context of the Ram temple, have had a tinge of pre-destiny. With Ayodhya roaring back into political discourse, the challenge is fearsome.

Nilanjan Mukhopadhyay is a writer and journalist. His first book, The Demolition: India At The Crossroads was published in the aftermath of the demolition of the Babri Masjid. He has also authored Narendra Modi: The Man, The Times and Sikhs: The Untold Agony of 1984.