Amidst protests by opposition members, Rajya Sabha TV stopped broadcasting live proceedings and the microphones of all members were muted. Rajya Sabha MPs of various political parties stage a protest after the passing of two farm bills in the house today during the ongoing Monsoon Session, at Parliament House in New Delhi. Photo: PTI

New Delhi: The chaotic scenes at the Rajya Sabha on Sunday over the manner in which the contentious farm bills were passed through voice vote has led to protests across the country.

A day after the controversial session, Congress-backed farmers’ organisations and independent farmers bodies have launched massive agitations in Haryana, Punjab, and elsewhere. Police have lathicharged such protesters at various places.

Even as the agitations escalated across the country, the chairperson of the Upper House, M.Venkaiah Naidu, on Monday morning rejected the no-confidence motion against the deputy chairperson of the House, Harivansh, moved by 12 opposition parties on grounds that such a motion needs a minimum of 14 days’ notice.

Opposition leaders stage a protest in the Rajya Sabha over suspension of 8 MPs, September 21, 2020. Photo: RSTV Screengrab via PTI

At the same time, chaos erupted in the Rajya Sabha over the suspension of eight MPs after the Union government’s junior parliamentary affairs minister V. Muraleedharan moved a motion against Derek O’Brien and Dola Sen (TMC), Sanjay Singh (AAP), Rajeev Satav, Syed Naseer Hussain, and Ripun Bora (all Congress), and K.K. Ragesh and Elamaram Kareem (both CPI-M) for unruly conduct during the debate on farm bills.

Amidst chaotic scenes inside the house, and a dharna by the suspended MPs outside the Parliament building, the Rajya Sabha was adjourned for the day.

While most opposition parties alleged the farm bills were passed in an undemocratic way, BJP leaders have hit back at the opposition members for disrupting parliamentary proceedings. However, neither the BJP leaders nor the Rajya Sabha chairperson and his deputy have explained as to why a division vote was not allowed on the farm bills despite the fact that most opposition parties, barring the YSR Congress, were opposed to the bills.

So what happened on Sunday at the Upper House? Here is a blow-by-blow account, collated on the basis of accounts of reporters who covered the proceedings and the versions of a few MPs The Wire spoke to.

At around noon, the deputy chairman Harivansh put the Farmers’ Produce Trade and Commerce (Promotion and Facilitation) Bill, 2020 to vote, and set the voting deadline at 1 pm.

This led to demands by opposition members, especially Congress leader Ghulam Nabi Azad, to postpone voting to Monday, as they wanted to discuss aspects of the bill. However, the government insisted that the bill should be put to vote immediately after the Union agriculture minister Narendra Singh Tomar’s speech.

When the government did not pay heed to the opposition’s request, a ruckus followed with members in the opposition benches storming the well of the house.

Brien flashed the parliamentary conduct rule book to demand a division of votes, or voting by pressing the button. He said if a division is not allowed, it would amount to a violation of conduct. DMK MP Tiruchi Siva also flung the rule book towards the well from far behind. 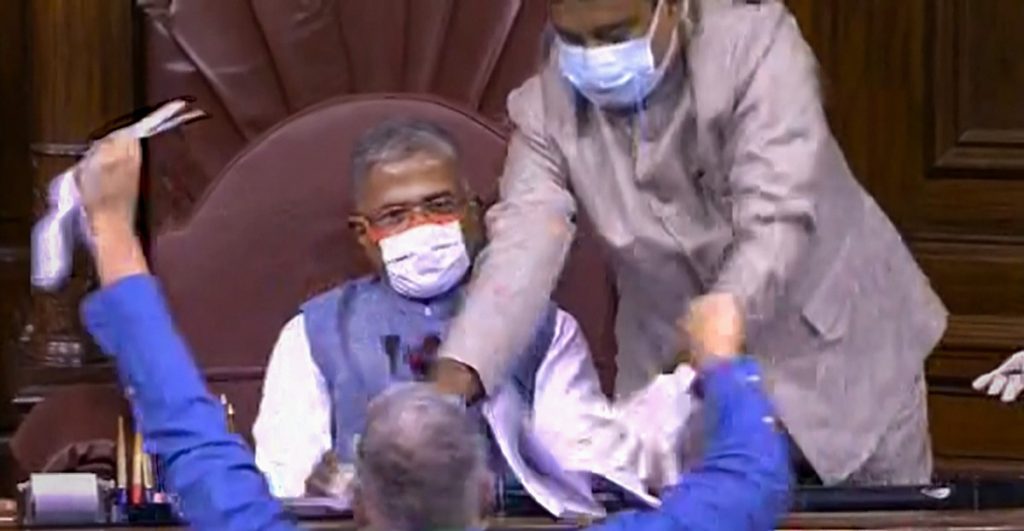 Amidst protests by opposition members, Rajya Sabha TV stopped broadcasting the proceedings and the microphones of all members were muted. However, footage captured on mobile phones showed that some torn pages of the rule book were thrown at the chair around the same time. While O’ Brien has been accused of tearing up the rule book, he has denied it vehemently.

“If even one proof is given of me having torn the rule book, I shall resign as MP tomorrow,” he told News18.

Around 1pm on Sunday September 20, the government murdered parliamentary democracy. They broke every rule of #Parliament.
Did they hope that the opposition would just sit and watch?

By this time, the opposition had started filming the proceedings as many of its members gathered for a sit-in in front of the chair, refusing to vacate the house. One of the videos shows an altercation between a marshall and AAP leader Sanjay Singh, who is seen as standing on the table of the secretary-general. Congress MPs Rajiv Satav and Ripun Bora are also seen sitting on tables while being forced by marshalls to come down.

The opposition MPs claimed that they were forced to record the proceedings as there was no way they could get their word out from the time when broadcast was stopped.

The three farm bills were eventually passed through a voice vote. Congress general secretary (organisation) K.C.Venugopal on Sunday alleged that the deputy chairman had acted in a brazenly partisan way, following the instructions of BJP leader Bhupendra Yadav even as the opposition members protested in the well of the house.

Also read: Interview: ‘A Level-Playing Field for Farmers Can Only Come Through an MSP Regime’

In the end, it was unclear amidst the noise as to how the deputy chairperson reached the conclusion that there were more “ayes” than “nos”. Although the Shiv Sena abstained from voting despite opposing the bills, and Nationalist Congress Party walking out of the house, many in the opposition claimed that the government would have lost the vote if a division of votes was allowed.

However, a significant number of MPs from both the NDA and opposition, who expressed their inability to attend because of the pandemic, were also absent on Sunday. Given that Shiv Sena abstained and NCP walked out, the total strength of the house could have only been ascertained though a division of votes. That would have laid the matter to rest.

Reporters covering the Parliament have done a headcount of MPs in the Rajya Sabha during #FarmBills debate:

You are the judge. pic.twitter.com/ZZzcGSv2KX

However, the deputy chairperson’s decision to hold a voice vote only muddied the waters further. Janata Dal (United) MP Harivansh’s role has been widely criticised, and is most likely to come under scrutiny in the days to come.

The chaos lent itself to Monday, when the House was adjourned early. With the Monsoon Session meant to last only till Wednesday, it remains to be seen whether other bills listed in the Rajya Sabha will be discussed or not.