Apart from addressing the farmers at length, the Congress President also attacked prime minister Narendra Modi on the Rafale deal.

Thee poster for the Rahul Gandhi rally at the entrance of the venue at Jaipur's Vidhyadhar Nagar stadium. Credit: Shruti Jain/The Wire

On the Congress’s loan waiver announcement, he said, “During the assembly elections, the farmers had raised their issues and we assured them  that their loans will be waived within ten days, when our party would come to power. What they [Modi government] couldn’t do in four years, the Congress did it [waiving farm loans] in just two days.”

At present, the Ashok Gehlot government in Rajasthan has just announced the loan waiver. The criteria for the same is yet to be formalised.

“The people of Rajasthan, Madhya Pradesh and Chhattisgarh have sent a message to Narendra Modi that he will have to waive loan of all the farmers in India and Congress party is not going to leave him [Narendra Modi] on this. We will keep him awake until he waive off farm loans across India and if he’ll not do it, Congress will do it [farm loan waiver] when it will come to power in 2019.”

However, Gandhi made it clear that loan waiver is not the complete solution to the agrarian distress in the country. “Loan waiver will definitely help farmers but it won’t solve their problems. It’s only the first step not the final one because without any strategy, farmers’ issues can’t be solved.”

He also shared a road map with the farmers for boosting the agriculture sector. “We need to think differently and prepare a new green revolution. I’ve a plan for this; we would set up food processing units, mega food parks in every region and these would be connected with the world economy. Technology will change our farmers’ lives.”

Gandhi spoke about how the Modi government’s economic decisions affected the economy. “Wherever he goes, he talks about providing job to the youth, but he brought the note ban and the Goods and Services Tax that ruined the small and medium business.”

The rally venue had large posters showing Narendra Modi and Anil Ambani embracing each other. The message written below read, “Yeh dosti hum nahi todenge, lootenge desh magar sath nahi chodenge (We will not break our friendship, we will rob the nation but never leave each other).” 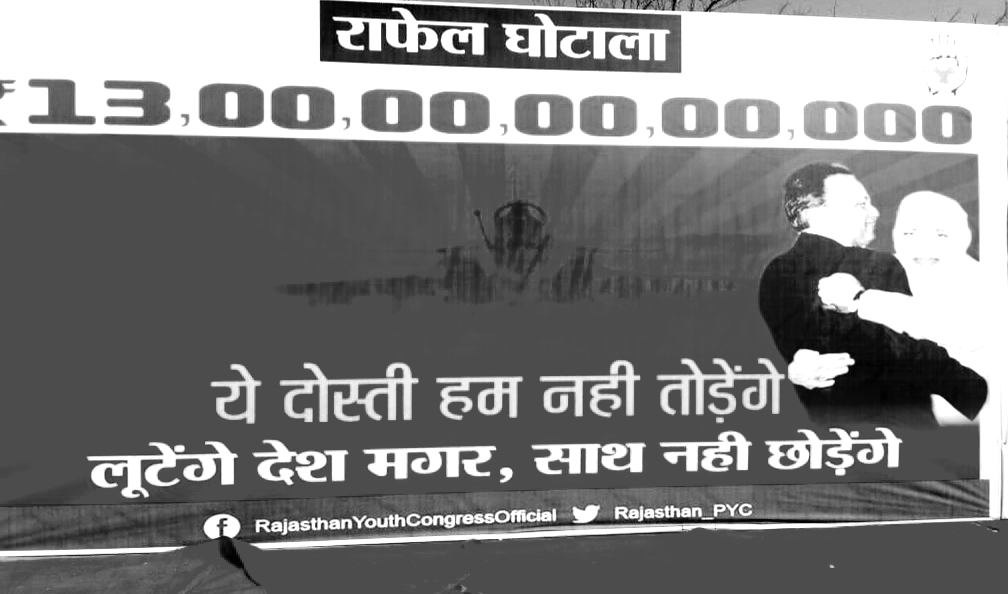 A poster on the Rafale deal at the venue showing Anil Ambani and Narendra Modi. Credit: Tabeenah Anjum/Twitter

Elaborating on issues with the Rafale deal, Rahul said, “The prime minister couldn’t come to the Lok Sabha for a single minute. Defence minister Nirmala Sitharaman gave speech for two-and-a-half hours, but she couldn’t answer any of our questions because chowkidaar chor hai (watchman is thief) and he is afraid to face questions.  “The watchman with a 56-inch chest ran away and told a woman, Sitharaman ji, defend me…,” Rahul Gandhi said, speaking in Hindi. “And for two and a half hours, the woman could not defend him.”

“I asked Sitharaman a direct question to answer in yes or no – whether the defence ministry and airforce officers working on this deal for eight years didn’t raise any objection when Modi gave the contract to Ambani – but she couldn’t answer it.”

“If Modi has given Rs 30,000 crore to Anil Ambani in the Rafale deal, justice will be ensured. There will be no pressure or witch-hunting,” he said.

When The Wire spoke to farmers at the rally, there were several mixed reactions about the Congress government’s loan waiver scheme.

“We believe that the Congress party’s decision to waive loans from all the banks is a welcome step, unlike Raje government’s one-time loan waiver only up to Rs 50,000 for small and marginal farmers who had defaulted on short-term loans from cooperative banks,” said Dau Lal, a farmer from Jodhpur. 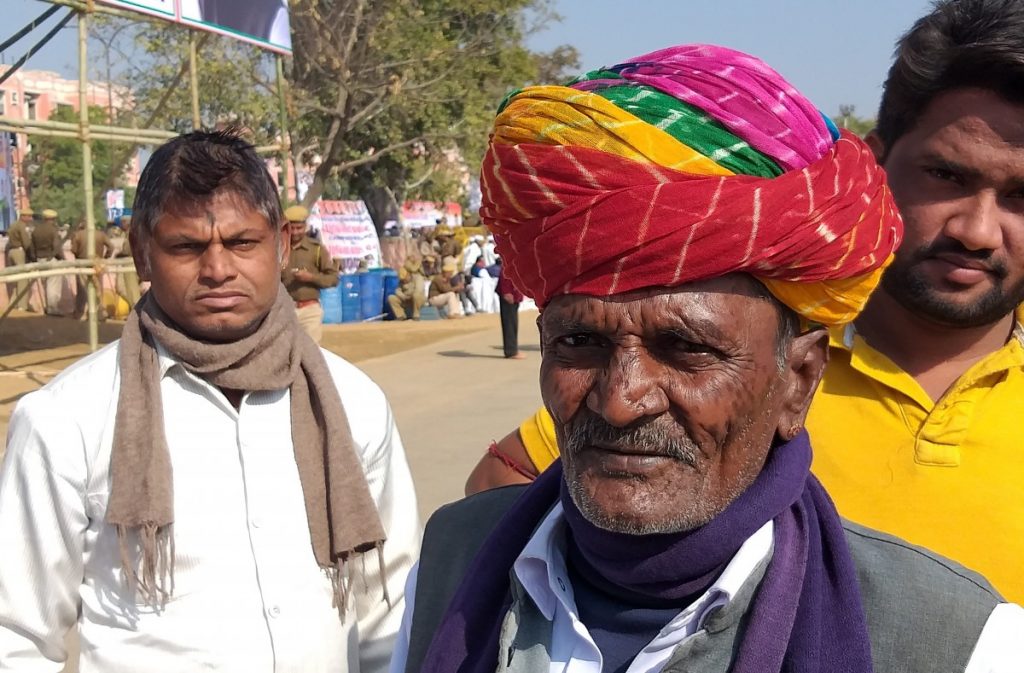 Dau Lal, a farmer from Jodhpur at the rally. Credit: Shruti Jain/The Wire

Others said waiving loans only of defaulters would discourage the prompt payers. “What about farmers like me who pay their dues on time? Is the loan waiver scheme by the government meant to make the farmers thieves?” asked Jagdish Choudhary, a farmer from Bagru  village in Jaipur.

Farmers also suggested that basic necessities like irrigation supply should be worked upon.

“If the government really wants to help the farmers, they should supply water for irrigation. The debt will again accumulate if the farmers will not have the facilities,” added Choudhary.

Reacting to Gandhi’s rally, Arun Chaturvedi, former minister and BJP MLA said, “Congress is talking about loan waiver but today the fundamental requirements of farmers like urea, fertilisers and seeds are not abundantly available in the state.”