In MP’s Malwa, the Race to Woo the Distressed Farmer Has Begun

The region has 65 seats in the 230-member assembly and will likely decide the fates of both the BJP and Congress party. 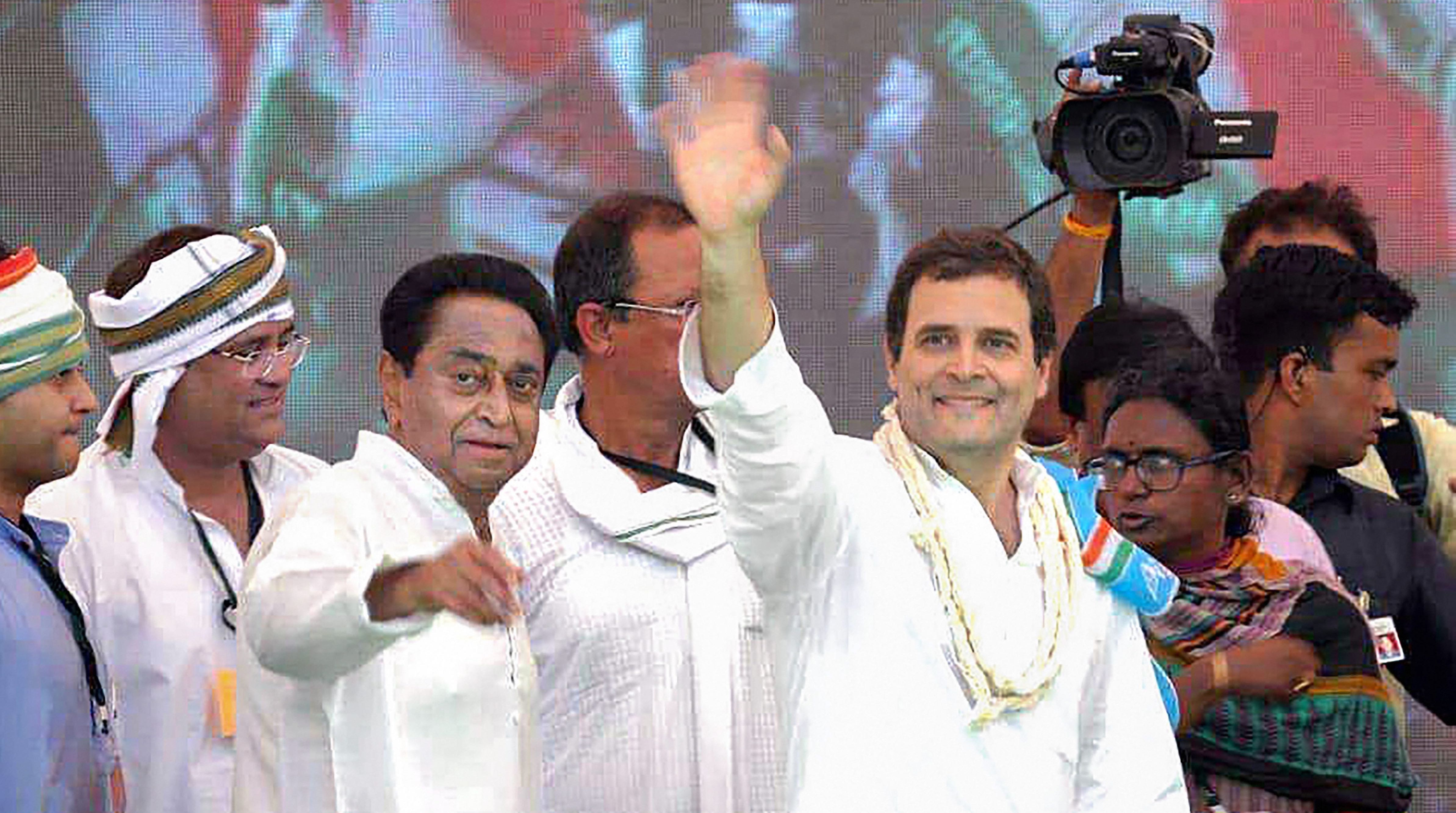 Rahul Gandhi at a rally in Mandsaur in MP's Malwa region. Credit: PTI

Bhopal: Rahul Gandhi’s announcement on Wednesday that farmers’ loans will be waived off within ten days if his party comes to power in Madhya Pradesh will likely impact the assembly elections slated for October-November. “The day Congress comes to power in Madhya Pradesh, you start counting the days, and I guarantee that within ten days your loans will be waived,” the Congress president said as he kicked off his party’s poll campaign in the state.

Rahul was speaking at a farmers’ rally at Pipliya Mandi in Mandsaur district to pay tribute to the six farmers killed in police firing last year. He made this promise in the state’s Malwa region, which has 65 seats in the 230-member assembly and could decide the fates of both the BJP and Congress.

Traditionally, the Malwa region has been under the influence of the Rashtriya Swayamsevak Sangh (RSS). A number of RSS leaders have held important posts in the BJP from here – former national president of the BJP, late Kushabhau Thakre, and all former BJP chief ministers, Sunderlal Patwa, Kailash Joshi and Virendra Sakhlecha, hail from this region.

In the 2013 assembly elections, BJP won 43 out of 65 seats in the Malwa region, and wrested all the eight Lok Sabha seats from this region in May 2014.

Later, in a by-election held in 2015, Congress’s senior tribal leader Kantilal Bhuria won the reserved Ratlam Lok Sabha seat. The Congress has a strong base among the tribals in Jhabua, Barwani districts.

Fearing Rahul’s announcement might shift votes to the Congress’s fold, state chief minister Shivraj Singh Chouhan said that the Congress president must first answer for the deaths of 21 farmers in police firing in the 1998 Multai (Betul district) agitation when the party was in power in the state.

“During the time of Congress, shots were fired just for fertilisers. They are talking about firing (in Mandsaur). Who was the chief minister in Madhya Pradesh when more than 21 farmers had died in the Multai firing? Congress should first answer that,” Chouhan said.

Swiftly, the Chouhan government too made a special announcement for the Mandsaur district, ignoring the mood of the voters that was reflected in the civic body elections held early this year when the Congress not only won all three seats but also improved its tally.

“The state government has announced special package for Malhargarh assembly seat falling in Mandsaur district, where Congress chief Rahul Gandhi addressed a rally. The state government has announced to open one anganwadi centre in Malhargarh and has allocated a sum of Rs 5 crore for the construction of 71 anganwadi bhawans in the Malhargarh assembly seat,” said senior Congress party leader Pankaj Chaturvedi. For quite some time, the ruling saffron party government is claiming that that the state has achieved 20% agricultural growth rate in the state in the last three years and has bagged five consecutive national Krishi Karman awards, which are given to states for raising the country’s food grain production.

These are a testament to Chouhan’s pro-farmer policy, agriculture minister Gauri Shankar Bisen had told this correspondent some time back.

Rahul’s pre-poll announcement might have great appeal across the state where farmer suicides continue to rise despite the numbers falling by up to 10% elsewhere in the country. In 2016, every eight hours a farmer committed suicide in the state. Between 2014  and 2016, farmer suicides declined by nearly 10% in India. Even at that time, Madhya Pradesh saw 1,321 farmer suicides – the highest since 2013, informed Union agriculture minister Purushottam Rupala in the Lok Sabha on March 20.

However, despite the impressive growth rate and the awards, the Chouhan-led government, according to political observers, is battling its biggest fight ever since the Vyapam scam.

“Farmer anger poses a great threat to the BJP and chief minister Chouhan who happens to be party’s poster boy in the state. Besides farmers, by and large people of the state are upset by the way the current government is functioning,” N.D. Sharma, senior journalist and political analyst said.

This is where the Congress has an advantage over the BJP in the state where 170 of the 230 assembly seats are rural.

The ongoing farmers’ protest on the heels of last year’s police firing in Mandsaur and neighbouring areas of Madhya Pradesh has come as a lifeline for the Congress.

Farmers are still angry with the BJP regime for the denial of remunerative price for their produce and impatient to teach it a lesson in the upcoming elections in Chhattisgarh and Rajasthan besides MP.

In all the three states, the Congress is in a direct face-off with the BJP. In MP, the ruling saffron party had won 165 of the 230 seats. The Congress stood second with 58 seats and Mayawati’s Bahujan Samaj Party (BSP) had won four.

In Chhattisgarh, the BJP won 49 seats and Congress secured 39 seats. The BSP and another got one seat, completing the 90-seat tally. In Rajasthan, BJP wrested 163 out of 200 seats, Congress 21, independents seven, while other parties and NPP got four each. BSP has won three and National Unionist Zamindara Party has won two seats.

Anup Dutta is a freelance journalist who has previously worked with Mail Today and Deccan Herald.