Rahul Gandhi Does Not Have the Luxury of Simply Walking Away

Rahul Gandhi tried to politely remind India's Hindus that they need not base their identity on hate towards other communities. He failed, but who succeeded? 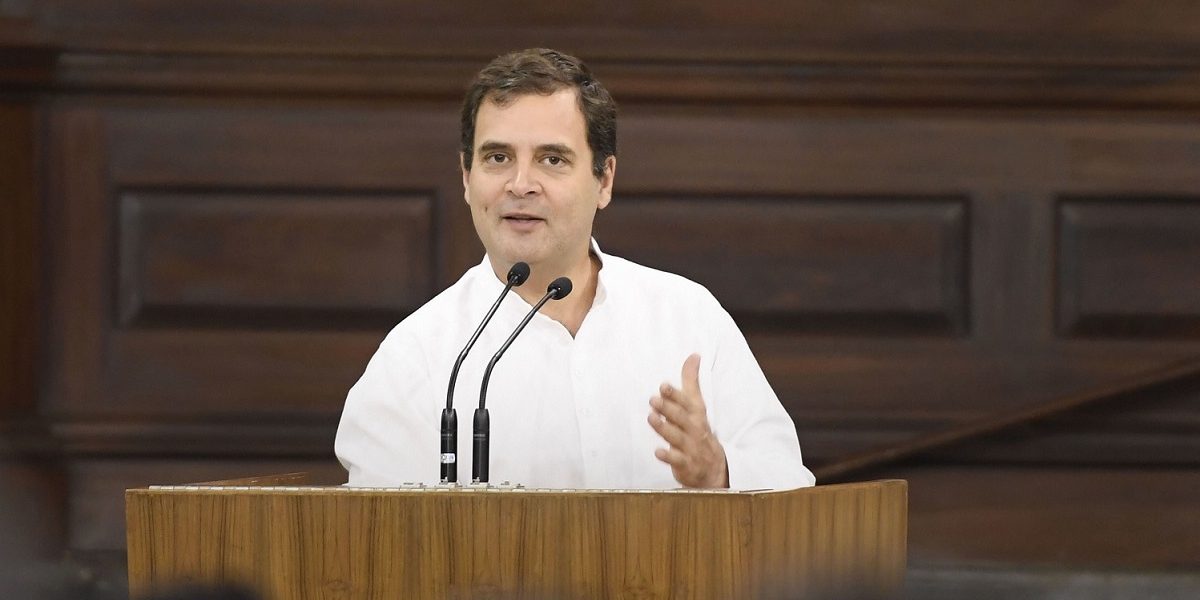 Rahul Gandhi has lost, and lost badly, but who has won? And who mocks Rahul for this loss? Before going into the details of all this, let us also examine when and how in the recent past has the rise of a racist or communal, xenophobic or fascist political force been successfully resisted. The challenge has been met, even if temporarily, when all democratic forces in society realise the enormity of the threat and get together to face it. The examples of Germany and France in the recent history of Europe can be seen. In the face of the Front National’s rise, diverse political forces converged their energies to convince the French people that something very crucial was at stake.

They managed to do exactly what Pratap Bhanu Mehta was suggesting to political parties in India, which they could not understand: that a coalition is not just a sum of different social, political and party interests. In a public conversation in Delhi, he explained that opposition unity was needed to persuade the people that there was something bigger than their own interests that was at stake. Also, it was an expression of the diversity of India. Lalu Prasad Yadav is a little late when he rues the fact that the non-Congress, non-BJP parties did not project Rahul Gandhi as their leader. His nomination could have inspired confidence in the people and would have also given them a sense of the national crisis by signalling their willingness and ability to work together by sinking their individual self-interest.

All this could not and did not happen. And now everybody is blaming Rahul Gandhi. That he could not match the charisma of Narendra Modi, that his speech-making skills fell short, that he failed to connect with people the way Modi did, etc. We need to rethink the way we admire the oratory of Modi; his ability to stoke hatred in people was hailed as great persuasive skill and he was presented as a mature, stable leader by the media. In an age when soft talk was derided, Rahul Gandhi tried to be half-way decent and failed.

Rahul was also criticised by some BJP critics for his “shaky” conviction in secularism. They wondered why  he tried to present himself as a Hindu and that in any case he was not convincing enough.

There are people who hold his parentage or ancestry responsible for people’s aversion for him. There are pundits who claim that Indian society is getting democratic at the bottom – that the youth don’t ask who you are or where you come from but what is it that you have done. Surely this sunny view needs to be reviewed after the suicide of Dr Payal Tadvi. She was doing something with her life but was still driven to death by relentless hounding. And yes, the questions she was asked were ‘Who are you?’.  Or, ‘How dare you aspire to being a doctor, being what you are?’.

Rahul Gandhi’s critics are not ready to take into account the political labour he put in over the last decade, trying to politely remind India’s Hindus that they need not base their identity on hate towards or exclusion of other communities. That humanity needed to define their identity. He failed, but who succeeded? All of us know that the Hindu community needed to be talked to, counselled and brought out of the spell cast by the Modi-led BJP and RSS. Hindus were losing faith in secularism and their trust needed to be restored in it.

What help did Rahul Gandhi get from the larger political class, from India’s intellectuals or indeed his own party? In the past few decades, the idea of secularism has received a lot of battering not only from the RSS but from many of our liberal, anti-RSS theoreticians too. It was attacked for being a transplant from the West and unsuitable for a traditional and religious society like India. That being a product of modernity, ‘secularism’ could only breed anxiety in a community-based nation like India. Thus the idea itself became untrustworthy. There were other secular-skeptics who felt that due to the overpowering influence of Nehru we lost track of our indigenous, national traditions. They have repeatedly stressed that there was a need to regain the essential principles of Bhartiya Sanskriti, or Indian culture in our own language. Those who argued along these lines never proposed a better Indian version which could replace what Nehru called a Gandhian idea. He never claimed ownership over it.

Rahul Gandhi came to the scene when one of the foundational ideas of India – secularism – lay severely injured. We can blame him for not being a Gandhi. But to be fair to him, he also did not have the support of intellectual resources and had to work in a hostile eco-system. You had a media which was hyper-nationalist and also anti-Muslim. Rahul Gandhi pitched himself against not only a political party but a much mightier force which was forged by the collaboration of the corporates and the media with the BJP.

Utterly handicapped, Rahul Gandhi went to the battlefield against an enemy with whom virtually all his potential allies had at one time or the other shaken hands. Their carelessness towards the issue of the protection of minority rights, a cornerstone of the concept of secularism, has been too evident.

The regional parties could not convey to the masses at the national level that they also want to bear the weight of the idea of India. They asked the Congress party to hold the flag and let them have their piece of the cake. This was exactly the opposite of what Mehta had suggested. The people saw them worrying about their own small corners. Their wariness about the Congress party and Rahul Gandhi was too evident.

The example of France

Let us go back to France again. Not too far back, in 2017, all parties united to support Emmanuel Macron and stop Marine Le Pen from capturing power. She could have been dismissed as an upstart. But the established parties knew the danger. They repeated the act of their predecessors when the father of Marine Le Pen had advanced to the second round of the presidential elections in 2002. He could also be stopped then only by a joint opposition.

Rahul Gandhi has inherited a party which does not remember the foundational principles of the party. It rarely invoke ideals or when it ever does, it lacks conviction. We are free to ask why Rahul Gandhi does not throw such leaders out. But then we need to recall that even in the times of Nehru many of the Congress’s tallest leaders didn’t share the secular conviction of Gandhi and Nehru. One has to look at G.B. Pant, Purshottam Das Tandon, Sampurnanand, etc, to understand the battle that Nehru had to wage within the party to uphold the Gandhian principle of secularism.

One also has to remember that Rahul was fighting a huge army of more than 50 lakh volunteers determined to turn India into the image of their sarsanghchalaks.

Also Read: Is It Still Possible To Strive For Yet Another India?

Did Rahul not believe in his cause? Or did most of us not take the cause as seriously as we should have and weakened the battle by not investing our faith in him? The 2019 election is his loss but in his loss, India’s secular polity has suffered grievous damage.

Yes, in 16 states the BJP won more than 50% of the votes but proper dynamics can and will produce a coalition total that is more than the sum of its parts. One must be clear – if all political forces don’t get together and come under a united flag (as they did in 1977) they will either be gobbled up by the BJP or broken.

Rahul Gandhi has his task cut out for him. He is destined to bear the cross of secularism which Gandhi had passed on to Nehru and now is his turn to carry. There is no joy or reward in this task. His great grandfather had to keep battling not only the RSS but communal leaders within his own party, all stalwarts of their times. He didn’t give up the battle. Nor does Rahul have the luxury of leaving it midway.