The Coming of Age of Rahul Gandhi

The Congress president is clearly emerging as the game changer in the 2019 general elections. 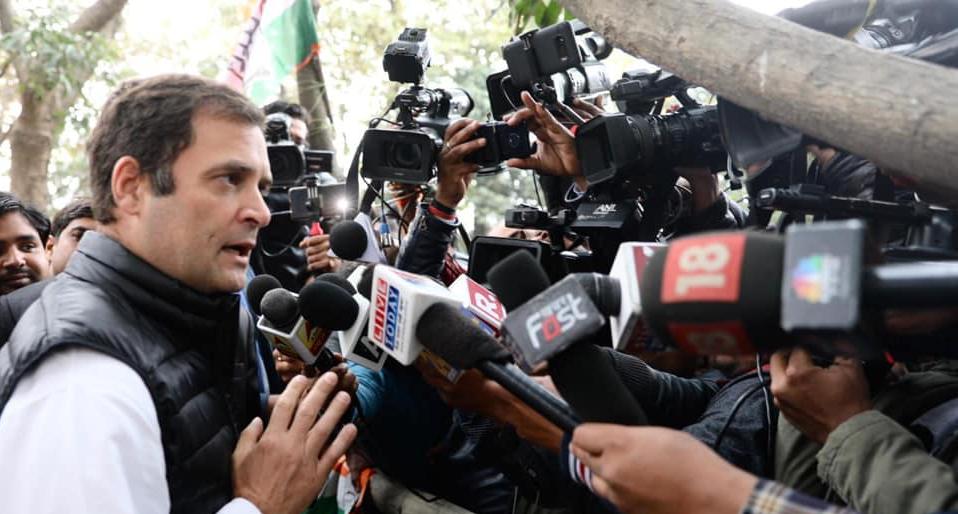 The metamorphosis of Rahul Gandhi from Pappu to game-changer has been truly remarkable.

This has clearly been his time when it comes to hitting the headlines. He has found an answer to the hackneyed issue of an “alternative narrative” and to the question of where the Congress stands on electoral “understandings”. On the first, he has replaced “jobs” with income. On the second “khichdi coalition” he has said, “only the Congress.” Whether it works or not is another question, but he’s clearly going for broke.

Last Monday, he produced a political and socio-economic bombshell by saying his party would ensure a minimum income guarantee for every poor person in the country if it returns to power after the Lok Sabha polls. “The Congress has decided to take a historic decision… The Congress-led government is going to give a minimum income guarantee. This means, each poor person in India will have minimum income. This means there will be no hungry, poor people in India,” Gandhi said.

What is the point of even more reservations, as the government has done with its announcement of 10% quota for the economically poor, when there are no jobs available? With this statement, Gandhi has shifted the entire debate from the ever increasing and virtually unobtainable job guarantees to income guarantees for one and all, irrespective of religion and caste. Clearly an “alternative narrative,” it is a plan to set the Congress apart from other parties opposed to the Bharatiya Janata Party as well as the BJP itself, a make or break move that might end in an (unexpected) big win for the Congress or its decimation, although it is unlikely to go below its 2014 figure of 44 seats.

Whether it is economically feasible or not is another matter, although if implemented, this would definitely obviate periodic farm loan wavers that account for thousands of crores of rupees every now and then.

Also read: Rahul Gandhi’s Decision to Take the BJP Head-On Could Be a Misjudgement

As for striking pre-poll alliances in khichdi coalitions, in an unprecedented move in the same week, he split the organisational responsibilities for Uttar Pradesh — a state with 80 Lok Sabha seats — between his sister and senior leader Jyotiraditya Scindia, thereby shutting out all speculation of a ‘Mahagathbandhan’ to include the Congress. He also shut out all questions of an alliance with M. Chandrababu Naidu in Andhra Pradesh, both for the Lok Sabha and the assembly elections.

It’s clear that the Congress will stand alone, barring some elections here and there. The recent assembly elections in Madhya Pradesh, Rajasthan and, more importantly, Chhattisgarh, seem to have been the driving force behind this decision. With Mayawati’s Bahujan Samaj Party and Ajit Jogi’s Janta Congress Chhattisgarh arrayed against the Congress, quite apart from the ruling BJP, the Congress won by a huge margin in December.

The income guarantee idea that Gandhi has floated is the first time that any party in India has come out with a true social security scheme that is not linked with jobs or work of any kind. A clear riposte to the Modi government’s latest sop of more job reservations for the general category this time, Gandhi has clearly indicated the futility of promising a further proportion of jobs when none were available.

Gandhi took the argument into the ruling BJP’s camp, saying if Prime Minister Narendra Modi “can give maximum income guarantee to 15 rich people, we are going to give minimum income guarantee to every single Indian”. In 2014, Modi had promised millions of jobs every year. Nearly five years later, there have been virtually none forthcoming.

“If you are Anil Ambani, you have the guarantee to maximum income you can get… Jobs can be stolen from the people of Karnataka, Kerala, Odisha, HAL (Hindustan Aeronautics Limited) can be pushed aside and Anil Ambani can be given a contract; and for five years, people of India have watched this tamasha,” the Congress chief said. He then reeled off the names of businessmen allegedly involved in financial irregularities, tagging the sums involved in each case for maximum impact: “Nirav Modi – 45,000 crore, Mehul Choksi, 30,000 crore. Vijay Mallya, 10,000 crore, Lalit Modi… ”

The Congress, he said, will not allow “two Indias”. “We will not allow an India where 15 persons can live like kings and have anything they want,” he added.

Also read: With Priyanka Gandhi’s Induction, Rahul Proves He Is Also a Pragmatist

The appointment of Priyanka Gandhi Vadra’s came as a surprise to many within the party and was announced soon after the Congress was kept out of the Samajwadi Party and Bahujan Samaj Party alliance. Eastern Uttar Pradesh is known as a stronghold of the BJP, and both Prime Minister Narendra Modi and chief minister Yogi Adityanath have contested from the area.

The simple take away from Priyanka ‘s appointment is that it has become very typical of the new Congress president to play on the front foot. It comes at a time when the party has only seven seats in the UP assembly and holds only two Lok Sabha seats in the family boroughs of Amethi and Rae Bareilly.

The Congress’s recent best performance in the state was in 2009, when it won 21 Lok Sabha seats. Rahul Gandhi was credited as the brain behind that performance and he had stayed away from alliances of any sort.

This is the most aggressive move that the Congress could make and a clear message that it will not be anyone’s B-team. The voter wants to vote out the BJP and they need an alternative. The BSP-SP is a caste-based alliance and would not have been an option for the forward castes.

Gandhi is clearly shaping the Congress out to be the sole alternative to the BJP, win or lose. It is in this vein that he has gone ahead and snapped ties with his recent ally, Andhra chief minister N. Chandrababu Naidu. The Congress party will go it alone in the general elections and field candidates for all the 175 assembly and 25 Lok Sabha constituencies in Andhra Pradesh. It remains to be seen how he will handle Maharashtra and Sharad Pawar, Bihar with Lalu Prasad Yadav, Kashmir and the Abdullahs and Tamil Nadu, although in the last two states no national party can go in without allies.

In the meantime, the BJP is struggling with its allies in the Northeast going their own way after the proposed changes in citizenship laws, in UP with the Apna Dal in revolt, in Bihar with Upendra Khushwaha and his Rashtriya Lok Samta Party breaking away and most importantly in Maharashtra, where long-term partner Shiv Sena is blowing more hot than cold.

Rahul is clearly emerging as the game changer in the 2019 general elections. He’s taking on the increasingly tired Modi-Shah duo with regular media briefings, most often on the Rafale deal, and frequent public rallies.

At his public appearances, Rahul is clearly not the diffident Pappu of 2014. He has broken with tradition when it comes to social security, replacing job reservations with income guarantees, and now he is in the process of doing away with the Index of Opposition Unity that has perhaps outlived its utility after 30 years.