From Politics of Hate to Cronyism, Rahul Gandhi's No Holds Barred Attack on Modi

With his assertive speech on the no-confidence motion, the Congress president used the parliamentary exercise to heap one allegation after another at the government. 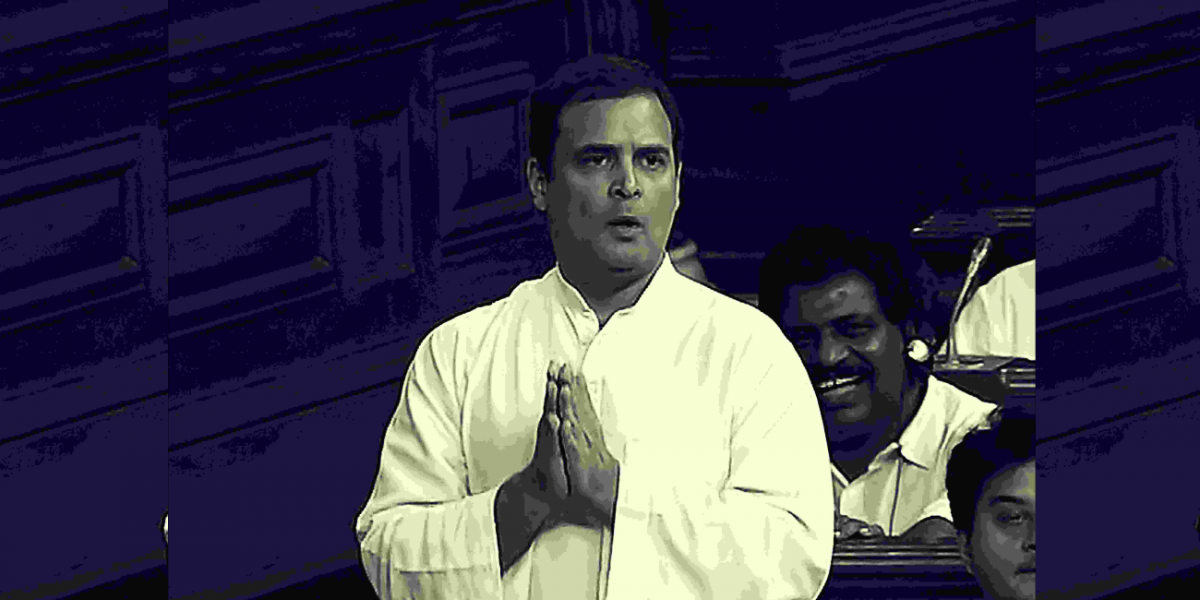 Congress president Rahul Gandhi speaks in the Lok Sabha on the no-confidence motion initiated against the NDA in the monsoon session of parliament in New Delhi on July 20, 2018. Credit: PTI/LSTV grab

New Delhi: Transforming the no-confidence motion from a mere numbers game to a full-fledged politico-ideological fight, Congress president Rahul Gandhi launched a scathing attack on prime minister Narendra Modi and his government’s policies. He used the parliamentary exercise to heap one allegation after another at the government, accusing both the prime minister and his colleagues in the cabinet of being “untruthful” to the Indian public.

He attacked the prime minister in one of his most aggressive speeches in parliament on primarily four counts.

When the earlier speaker, Rakesh Singh, from the treasury bench, spoke about multiple social sector schemes that had been introduced by the Modi government, Gandhi dismissed them saying that the government has done nothing concrete to help the poor and had instead relied on false promises – what he called a series of “jumla strikes”.

Instead, he said, the prime minister had protected the interests of big businesses. He went on to say, “Everybody knows about the amount of money that goes into the prime minister’s marketing. One of those people was given the Rafale (maintenance) airplane contract by taking away the deal from HAL (Hindustan Aeronautics Ltd, a public sector unit). The businessman has a debt of Rs 35,000 crore and has not made a single plane in his life. Yet, he was given the Rafale deal.”

Gandhi was speaking in the context of the controversial Rafale deal, which the UPA-II had struck with France but had been re-negotiated by the NDA government allegedly at escalated prices. The maintenance contract, which had earlier been given to HAL through a technology transfer agreement, has now been given to Reliance Aerostructure, a joint venture between Anil Ambani’s Reliance Group and Dassault, the French company which manufactures the Rafale combat planes.

Gandhi’s clear implication was  that crony capitalist practices under Modi government have received a big boost and that all talks of being pro-poor were a “mere eyewash.” “This government waived off Rs 2.5 lakh crore debts of around 20-25 richest people of India. But when lakhs of farmers request the prime minister with folded hands to give them some loan relief, it falls into deaf ears,” he said. “I looked Prime Minister Narendra Modi in the eye, and he couldn’t even face me. He is not a chowkidaar, he is bhagidaar,” Gandhi said.

Gandhi then targeted the government for pushing India into a financial crisis. “The unemployment rate has hit a seven-year high under the this government. Modiji had promised two crore jobs in one year. The situation, however, is far from that. Yeh hai pradhan mantri ke shabdon ka sach (This is the truth of the prime minister’s words). The Congress wanted to introduce one GST and include petroleum products in it. Modiji as the then chief minister of Gujarat had opposed it. And now as prime minister, he has brought in five different GSTs. He cannot feel the pain of small businessmen and shopkeepers whose businesses have taken a beating because of such policies. And now he has launched another jumla strike, that of increasing MSPs for crops. One only needs to speak to a farmer what they feel about it.”

The Congress president said the government’s foreign policy lacked any agenda. Recalling an earlier jibe he had made against Modi, he once again said that the “suit-boot ki sarkar” and spent huge amounts for prime minister’s foreign visits but has until now only compromised Indian security. While Modi was welcoming China’s president in Gujarat, Chinese soldiers had occupied Indian territory.

“Modiji went to China but did not have any agenda. He refused to speak about Doklam which theChinese army had illegally occupied. A lot of our soldiers had to die because of this agenda-less foreign policy,” he said.

Gandhi further questioned the prime minister’s conspicuous silence in multiple instances where his party’s leaders and cabinet ministers were accused of deliberately disrupting social harmony. He cited The Economist to say that India has become one of the dangerous places in the world for women. He said that gangrapes and atrocities against women have drastically increased, as have brutalities against Dalits, adivasis and minorities. “I want to ask the prime minister – are Dalits, adivasis and minorities not a part of India?”

“Your ministers go and say in public that the BJP wants to change the constitution. Why were you silent then?” he asked, while referring to Ananth Hegde’s statement before the Karnataka assembly elections. He said that such statements and attacks on vulnerable groups is a direct assault on the constitution and Dr. B.R. Ambedkar.

Gandhi ended his speech by attacking Modi and Amit Shah, saying that the political duo were different from other politicians in India because unlike them, others could afford to lose power.

“The prime minister and Amit Shah cannot afford to lose power. If they lose, other processes will start to act against them. So they act out of fear. That fear generates anger. It is that anger that is getting transmitted across India. And that is against our country’s pride. Today, I am saying that together, the whole opposition, is going to defeat these forces in the next elections,” he said. 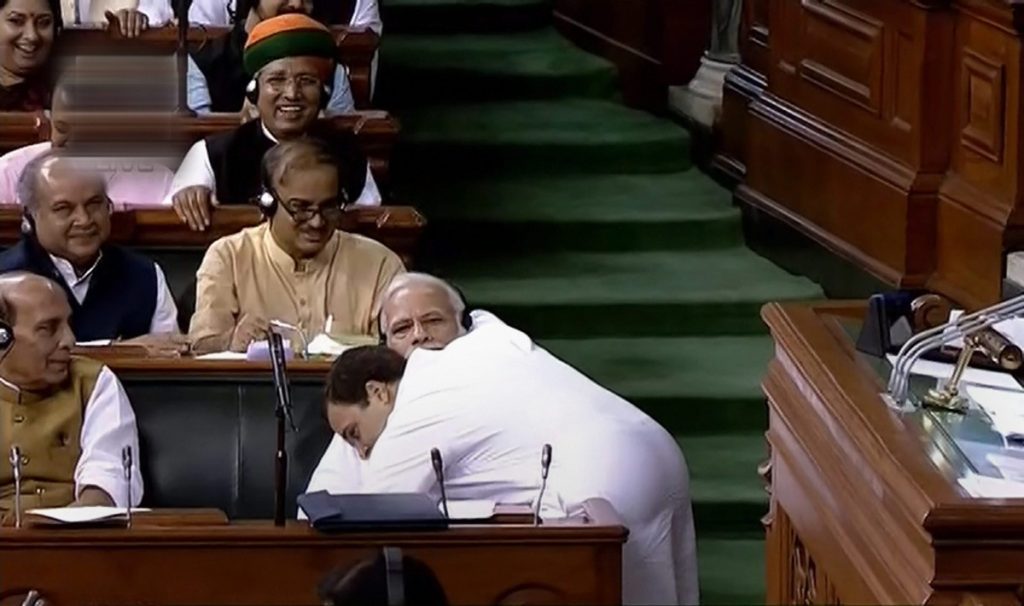 Many aspects of Gandhi’s speech laid down the Congress’s political plank before the 2019 general elections. He also thanked the Sangh parivar for reminding him what the Congress stood for, saying that it is the politics of hatred practiced by the BJP and RSS that helped him understand the “meaning of Hindustan” and the fact that the Congress stands for “love for all” irrespective of their identities.

“Congress believes in this Hindustan. I am Congress. Our whole party will adopt the task to bring out love in everyone, even in our opposition,” he said just before he walked towards the treasury benches to embrace Modi, an unprecedented moment in the history of no-confidence motions in the Indian parliament.