Citing the “abuse of authority” clause in the Prevention of Corruption Act in their complaint against Narendra Modi and former defence minister Manohar Parrikar, the two former BJP Union ministers and senior lawyers said that "undue advantage" had been given to Anil Ambani.

The development comes on the heels of the trio’s persistent campaign against the aircraft deal over the past few months. In press conferences and writings, the three have alleged that the Modi government violated several clauses of the defence procurement procedures to unilaterally announce the inter-governmental contract with France to purchase 36 Rafale fighter jets in April 2015. They have accused the Union government of nullifying the ongoing process to purchase 126 aircraft from Dassault Aviation, the French company which manufactures Rafale jets, in order to divert the offset benefits worth Rs 30,000 crore to Anil Ambani-owned Reliance Defence Limited (RDL) – an accusation that even the Congress party has been making.

Also read: The Moral Headwinds from Rafale and the Rajan List are Bound to Batter Modi

The matter took political centre-stage as the public sector undertaking Hindustan Aeronautics Limited (HAL) was supposed to have actually manufactured 108 aircraft in India  in the deal struck by the UPA government. As a result, Sinha, Bhushan and Shourie have been accusing the Modi government of cronyism as they believe the prime minister cornered HAL and lobbied for RDL in the new agreement.

A recent statement by former French president Francois Hollande, in which he said that he had no role in choosing the offset partner and that the Indian government recommended RDL’s name, also blew up the mystery around the Rafale deal. The Congress and other opposition parties have grabbed the opportunity to bombard the BJP with questions and have said that the deal has all the makings of one of the biggest defence scams in Indian history. 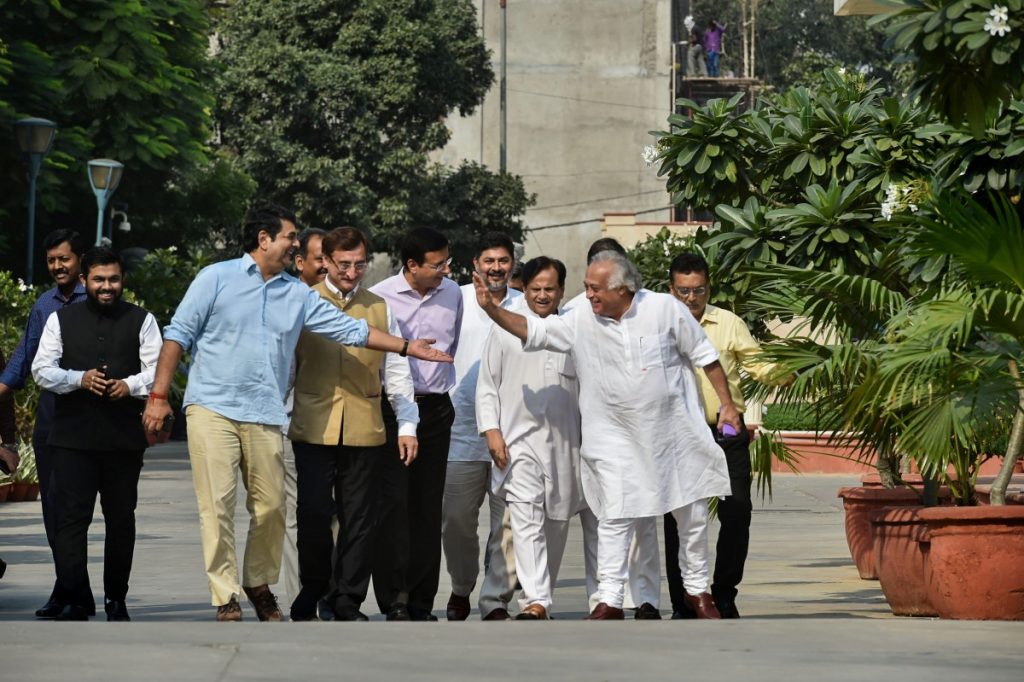 A delegation of senior Congress leaders consisting of Ahmed Patel, Jairam Ramesh, Randeep Surjewala and others leave after a meeting with the CAG to demand a probe in the Rafaela deal in New Delhi on October 4, 2018. Credit: PTI/Arun Sharma

Citing the “abuse of authority” clause in the Prevention of Corruption Act, 1988, as reason enough for the CBI to proceed against the Modi and Parrikar, the complainants claimed,

“Mr. Anil Ambani’s companies have been verging at the point of insolvency. Creditors of his group companies have initiated proceedings against his companies to recover their dues… Reliance ADA has had to sell many of its precious assets to pay off its interest obligations and stave off insolvency proceedings. In these circumstances, a conspiracy was hatched by the two of them (Modi and Anil Ambani), by way of which, Mr. Modi obtained an ‘undue advantage’ from Dassault Aviation, for awarding a contract for 36 Rafale aircrafts in ‘fly-away’ condition, by abusing the authority of his office and doing his public duty dishonestly and improperly.”

“The ‘undue advantage’ has been received by his close associate and friend Mr. Ambani. As a consideration for abusing his official authority and doing his public duty dishonestly, Mr. Modi compelled Dassault to choose Mr. Ambani as an offset partner, by way of which Mr. Ambani received, and is receiving, and will continue to receive, for the next 40 years, an ‘undue advantage’,” the complaint added.

To corroborate their accusation, the trio quoted a meeting between Modi and Anil Ambani  on March 3, 2015, after which Ambani told the media that the prime minister had requested him to enter the defence sector.

The fact that Ambani’s company RDL landed the massive offset contract within 12 days of its formation, while  HAL, which has more than 50 years of experience in the defence sector, was cut out completely, has also raised questions.

In their complaint, the three have submitted a chronological list of events to allege that “Modi asked Dassault to give the major offset contracts in this deal to Anil Ambani’s defence company as a condition for getting the contract” – in their effort to prove that the prime minister abused his authority in the Rafale deal.

Bhushan, Shourie and Sinha also said that Modi signed the new deal when the the previous agreement to purchase 126 aircraft was already at “an advanced stage”. Whether the CBI has the power to take cognisance of the complaint by private individuals remains to be seen, but one way or the other, it is evident the political fall-out from the controversy is only likely to intensify in the weeks and months ahead.