Rafale Deal Was a Partnership Between Anil Ambani and Modi, Says Rahul Gandhi

Referring to The Wire's reportage on ties between Dassault and Reliance, Gandhi asserted that the "Dassault CEO is lying" and that “if an inquiry starts on this, Mr Modi is not going to survive it".

“If an inquiry starts on this, Mr Modi is not going to survive it. This is guaranteed,” Gandhi asserted.

Gandhi was referring to The Wire exclusive which said that Rafale manufacturer Dassault Aviation, soon after it formed a joint venture (JV) with the Anil Ambani-owned Reliance Defence Limited (RDL), had also invested around 40 million euros in another of his subsidiary companies in 2017 – Reliance Airport Developers Limited (RADL). Dassault bought 34.7% of the equity in RADL at a time when the Reliance group company had almost zero revenue and had been consistently posting losses.

However, Dassault’s investment, according to company records, helped Reliance Infrastructure (RInfra), RADL’s parent company, make a profit of Rs 284 crore as RInfra sold RADL’s shares to Dassault at a premium. The report also said that RInfra in the same period advanced an inter-corporate loan to Reliance Aerostructure, which, around the same time, finally came up with the last instalment of a payment it was meant to make to procure land in Mihan in Maharashtra, where the Dassault-Reliance JV, DRAL, opened its manufacturing unit last year. 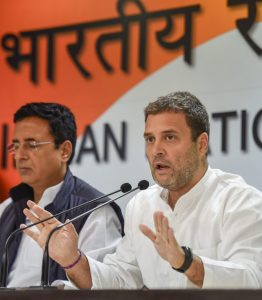 Since RInfra also owns RDL, which is said to be the prime beneficiary of the Rs 30,000 crore offset contract in the Rafale deal, Gandhi said that Dassault’s investment in a loss-making company like the RADL was nothing but a “kickback”.

“For some reason, which is hard to understand, Dassault gave Rs 284 crore to a loss-making company whose valuation is merely Rs 8 lakh. What is this if not one of the many tranches of money that Dassault gave to Mr Anil Ambani. This is the first instalment of kickbacks,” alleged Gandhi.

Gandhi claimed that Dassault CEO Eric Trappier was lying when he said his company dropped Hindustan Aeronautics Limited (HAL)  in favour of Reliance because the Anil Ambani group company owned land near an airport where it could set up a production facility. The Congress president said that if land was a concern, then HAL has much more of it than RDL, which had no experience in the aerospace sector. It has also turned out that the Mihan production facility will manufacture Falcon planes, a civilian aircraft, and not Rafale fighter jets.

Dassault invested Rs 284 Crore in the company of Anil Ambani. Anil Ambani bought land with the same money. This is clear that Dassault CEO is lying. Why did they invest Rs 284 crore in a loss-making company?: Congress President Rahul Gandhi #RafaleDeal pic.twitter.com/InY7ggJHrC

He alleged that the Rafale deal was effectively “a partnership between Anil Ambani and Narendra Modi” and that Dassault was forced by the prime minister to get into a JV with RDL by sidelining the public sector undertaking, HAL.

The Congress has been alleging that Dassault too got a sweet deal in the process as the new agreement under Modi required it to sell 36 aircraft in a “fly-away” condition instead of 18 fighter jets as per the deal struck by the UPA government. The UPA had negotiated a deal with the French company to purchase 18 aircraft in ready-to-fly condition and another 108 jets which would be jointly manufactured by HAL and Dassault in India. The scrapped deal also required the French aviation company to transfer its technology to HAL.

“Rafale is an open and shut case. Clearly there is a cover up taking place. The government of India says the price at which Rafale jets were bought is a top secret. However, Dassault’s annual report has the pricing in it. It is there. It shows how much the Indian government paid. I met Mr (Emmanuel) Macron, the current president of France. He told me that there is no secrecy clause as far as the prices are concerned,” the Congress president claimed, adding that the Modi government went about the deal in an entirely non-transparent way.

He added that the Congress will keep pushing for a joint parliamentary committee probe on the Rafale deal even though “the Modi government will not agree to it”.

While allegations of bribery, as put forward by the Congress president, have not yet been clearly substantiated, the party’s rank and file took to Twitter with the hashtag #RafeleBribeRevealed.

Rafale is a open and shut case. CBI Director was removed because obviously CBI was looking into these matters. Defence Minister flies to France and Dassault speaks in favour of Anil Ambani: Congress President @RahulGandhi #RafaleBribeRevealed pic.twitter.com/itaIslNo5A

So those who asked; Where is the corruption on #RafaleScam? There are two answers. 1) The Rs 284 crore money trail 2 ) The political funding in perpetuity through electoral bonds that would ensue; anonymity assured. A clear pay-off. #RafaleBribeRevealed https://t.co/9vhp9EqNkE

Is there still a doubt about the Rafale scam, the wires of which directly go to the political top in India? https://t.co/SqkT4v2flw

The money trail in the Rafale scam is now very clear. It is a smoking gun in the case of corruption, if there ever was one. Is there still any doubt that this is the most brazenly corrupt govt we have ever had in independent India’s history? @thewire_in pic.twitter.com/13TQjwZxUC

Soon after Gandhi’s allegations, RInfra issued a press statement that says that the charges levelled against the company are “blatant lies” and that the Congress party is distorting facts “to mount an unwarranted campaign of calumny and falsehoods against the Reliance Group and its Chairman Mr Anil Ambani personally”.

The statement quotes an anonymous RInfra spokesperson: “It is deeply unfortunate that the Reliance Group and its Chairman, Mr Anil Ambani, are continuously being dragged into a political battle in view of the impending State and General elections in the country.”

Also read: Dassault’s Investment in Other Anil Ambani Company Had ‘No Link’ to Rafale: Reliance

It further says that Dassault’s investment in RADL had no links with the Rafale deal and that the said transaction was based on Dassault’s assessment of RADL’s assets and its potential in the airport infrastructure sector. The press note, which details RADL’s assets in detail, also added that the French company’s investment was made at a “fair value” – and not at a premium – which was arrived at by “an independent expert as per the RBI guidelines”.

What is more crucial is that the Anil Ambani-owned company refuted the specific charge that the profit accrued by it as a result of Dassault’s investment of around 40 million euros was not used to purchase the land in Mihan. “The Congress party has falsely alleged that the funds invested in RADL have been used for the purchase of land at Mihan, Nagpur for the Dassault-Reliance 49:51 JV. The payment for the land at MIHAN, Nagpur, Maharashtra was made from 2015 to 2017, much before the investment by Dassault in RADL,” the press note says, adding that the French aviation company’s investment in RADLA happened in September, 2017 in a transparent manner.

“Reliance Infrastructure applied for land at MIHAN in August 2015.  Land was allotted in January 2016 and all payments for the above land were made between Aug 2015 to Jul 2017. To allege that Dassault investment in Reliance Airport Developers Limited (RADL) was used to pay for this land is factually incorrect and preposterous,” the press note says.

“The investment by Dassault in RADL and purchase of land by Reliance Infra for setting up a manufacturing facility for the JV are two different and independent/stand alone transactions,” the note adds.