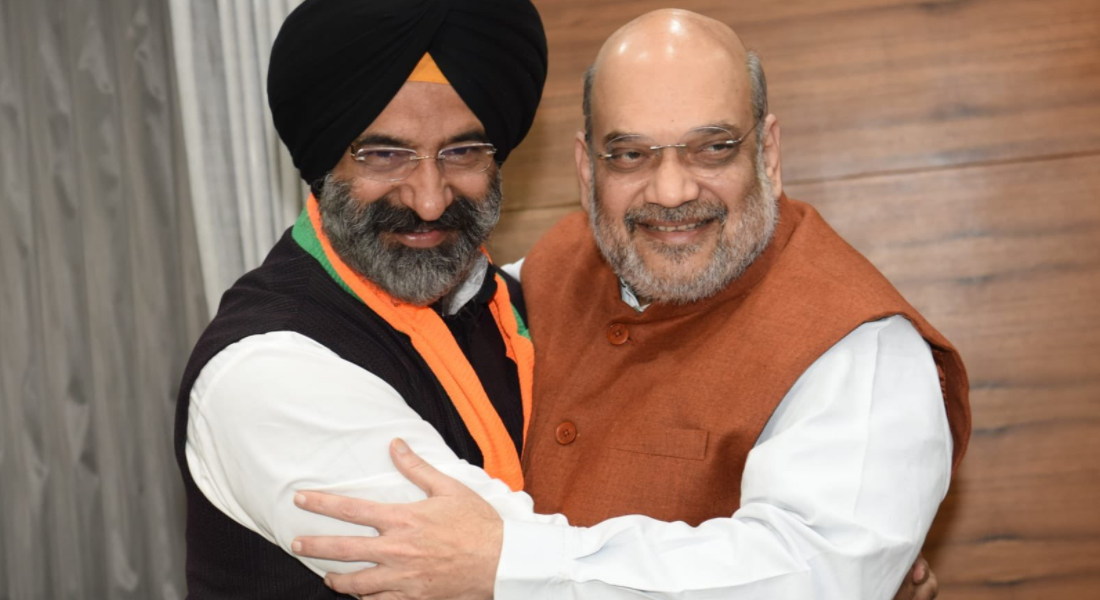 Chandigarh: One major impact of the farmers’ protest was that it sidelined the mighty Bharatiya Janata Party (BJP) in Punjab, as the party faced the ire of the farmers for bringing in the farm laws without any consultation process.

With these laws now repealed, the BJP plans to reverse the hostility it faced during the year-long farm movement, particularly so, when assembly elections for five states including Uttar Pradesh and Punjab are due early next year.

It touches on two major political aspects. First, there is an ideological bankruptcy among political leaders. Sirsa’s sudden decision to join the BJP only reinforces this belief, especially because the former MLA did not contest the 2020 Delhi assembly polls over differences with the BJP over the Citizen (Amendment) Act (CAA). “Our stand is clear that the country cannot be divided on the basis of religion,” Sirsa had said.

On the National Register Citizens (NRC) too, he had said that there should be no law that makes people stand in queues and prove their credentials. “This is a great nation and there is no space for communalism,” he had said.

Manjinder Singh Sirsa, Shiromani Akali Dal: We are also against National Register of Citizens (NRC). We want that there should be no law which makes people stand in queues and prove their credentials. This is a great nation and there is no space for communalism. pic.twitter.com/Qii7hI1yHT

Second, the BJP wants to kill two birds with one stone with Sirsa’s induction. It wants to assuage the farmers by inducting a Sikh leader like Sirsa, who was among the biggest supporters of the farm movement. He was among the prominent critics of the farm Bills and helped the farmers in organising langar at protest sites in Singhu, Ghaziabad and Tikri. He also helped the farmers who were arrested after the January 26 violence.

Sirsa was also heading the Delhi Sikh Gurdwara Management Committee (DSGMC) for quite some time. He resigned from the post before joining the BJP.

The BJP’s apparent game plan through Sirsa is to regain trust among the Sikh community after the farm laws debacle.

The recent re-opening of the Kartarpur corridor to allow Sikhs to travel to the birthplace of Guru Nanak was also part of the BJP’s strategy ahead of the Punjab elections to please the Sikhs, whose support is necessary for any party to form the government in Punjab. The corridor was closed after the outbreak of COVID-19 in March last year.

After Sirsa, the BJP is planning to enter into an alliance with another Sikh face, former Punjab chief minister Amarinder Singh. As per media reports, Singh will be meeting BJP president J.P. Nadda on December 4, Saturday.

Singh had already declared that he will also bring on board other factions of the SAD, including Sukhdev Singh Dhindsa, who was once a key Akali politician before parting ways.

After Sirsa’s joining, BJP leaders from Punjab indicated that more Sikh leaders are keen to join the party.

A glimpse of it was seen on Friday when former director general of police Sarbdeep Singh Virk and former SAD leader Sarabjit Singh Makkar were among those who joined the BJP in Delhi. Will the BJP’s game plan work?

Now the question is whether the BJP’s game plan will work. Senior journalist Jagtar Singh told The Wire that even though the farmers’ protest was largely an economic and social movement, the issue is also personal for the Sikh community. Among the 700 people who farmers’ unions say died during the protests, at least 500 are estimated to be Sikhs.

“To say that Sirsa’s induction will wash away the anger against the BJP is foolish. The BJP, through Sirsa, will try to take some credit by accepting the demand of the farmers to repeal the farm laws. But no political party can take credit for this protest. The whole credit will go to the farmers who fought a relentless battle to repeal these laws and made supreme sacrifices,” he said.

“At best, the induction of Sikh leaders will provide some space to the BJP to campaign in villages. The BJP was looking for some Sikh faces for some time. Earlier, they were in touch with an Akali leader from Punjab, but that did not materialise. They have now inducted Sirsa. Some more may join the BJP since ideologies among political leaders is a thing of the past,” he added.

Political analyst Ashutosh Kumar said that Sirsa’s induction is a mere image-building attempt by the BJP to show that they are no longer politically sidelined in Punjab. The alliance with Amarinder Singh and other Akali faction groups should also be seen in the same context.

“But it is more tokenism. Enough evidence is available that the BJP never enjoyed dominance over Sikh voters in Punjab. The induction of a few Sikh leaders, whether one has a base in Punjab or not, will not change this equation overnight as common voters do understand that changing political parties before elections has become a trend,” he said.

He further said that soon, political leaders will be seen switching sides for a number of reasons. “In the Congress, Navjot Singh Sidhu may axe some sitting MLAs. Where will they go? Some of them will join the Amarinder’s party or others may join the BJP.”

Historically, the BJP has been the party of urban, upper caste Hindu voters in Punjab and has never contested more than 23 seats.

“This time, the BJP will have to field candidates in all 117 assembly seats in Punjab if it goes alone. Even if it enters into an alliance with Amarinder, it will still need substantially more number of candidates,” he added.

Political commentator Harjeshwar Pal said that Sirsa’s decision to join the BJP may be a psychological setback for Akalis since he was the party’s active face during farmers’ protests. But it will not have much political impact in Punjab.

“Sirsa has no base in Punjab. He is a Delhi-based leader. At maximum, his joining can be seen as a mere optics in light of the BJP’s attempt to neutralise the impact of the farm protest,” he added.

Meanwhile, farm leaders are saying that Sirsa will be treated like other BJP leaders. Bharatiya Kisan Union (BKU) (Dakaunda) chief Buta Singh Burjgill is quoted as saying: “If Sirsa is thinking of contesting elections from Punjab on a BJP ticket and he thinks that he will get sympathy, he is living in fool’s paradise. Punjab will not forgive the BJP for troubling farmers for more than a year.”

Shingara Singh Maan, senior vice-president of BKU (Ugrahan), added, “The BJP is desperate to find new Sikh faces and they found one in Sirsa. It seems he was being sidelined by the SAD and hence he joined the BJP. But in Punjab people will treat him the way we will treat any BJP candidate. Modi took back farm laws but after 700 farmers died. We will not forget. Our struggle forced him to bow down and anyone who will try to get political mileage out of the struggle will face the music. Amarinder will also get similar treatment.”

Also read: Why the Farmers’ Demand to Legalise MSP Is Justified

An allegation: Did Sirsa buckle under pressure?

The SAD issued a statement describing Sirsa’s crossover as an “attempt by the enemies of the Khalsa Panth to achieve through conspiracies what they cannot achieve with the will of the Sikh community”.

It further said, “A case was registered against Manjinder Singh Sirsa, SAD Delhi president Jathedar Harmeet Singh Kalka and 11 other members of the DSGMC and Kalka Sahib. But while Kalka and all other members lived up to the traditions of the Khalsa Panth in fighting repression, it is unfortunate that Sirsa buckled under pressure and betrayed the Khalsa Panth and its spirit.”

The SAD said that the Khalsa Panth has been under attack since its inception. First the British, then former prime minister Indira Gandhi and the Congress government had tried to sabotage their religious institutions through conspiracies, repression and sabotage. They tried to gain control of Shiromani Gurdwara Parbandhak Committee (SGPC) and DSGMC through the back door even though the Khalsa Path has always backed SAD and defeated every conspirator and traitor.

“Now the Union government has taken over the role which earlier the Congress governments at the Centre used to play,” said the statement, adding that the “Khalsa Panth has defeated these conspiracies in the past and will defeat them again now. And will give a befitting response to these conspiracies”.

Meanwhile, the Akal Takht acting jathedar Giani Harpreet Singh on Thursday alleged that Sirsa was forced to join the BJP, claiming that the party gave him “jail” as the alternative option.

“I had a telephonic conversation with Sirsa yesterday. It appeared to me that he too was offered two options. He was asked to either join the BJP or go to jail. He faced a situation similar to that prevailing during the foreign rule,” he said.

The Delhi-based Sikh leaders are also responsible for this situation as they prepared the ground for Sirsa being forced to join the saffron party. “This is a political blunder,” he said.

While Sirsa has so far not reacted to the latest barrage of allegations by the SAD and Akal Takht acting Jathedar, journalist Jagtar Singh said that Sirsa had lost to the general house of the DSGMC in the recent election.

He was facing disqualification from the Gurdwara Election Commission. But that’s a different issue. He failed the test of writing correct Punjabi – one of the qualifications under the Delhi Sikh Gurdwara Act.