Sikhs have for long been deeply wary of the RSS's scheme of a Hindu Rashtra and its subversive movement to merge the Sikh identity with Hinduism. 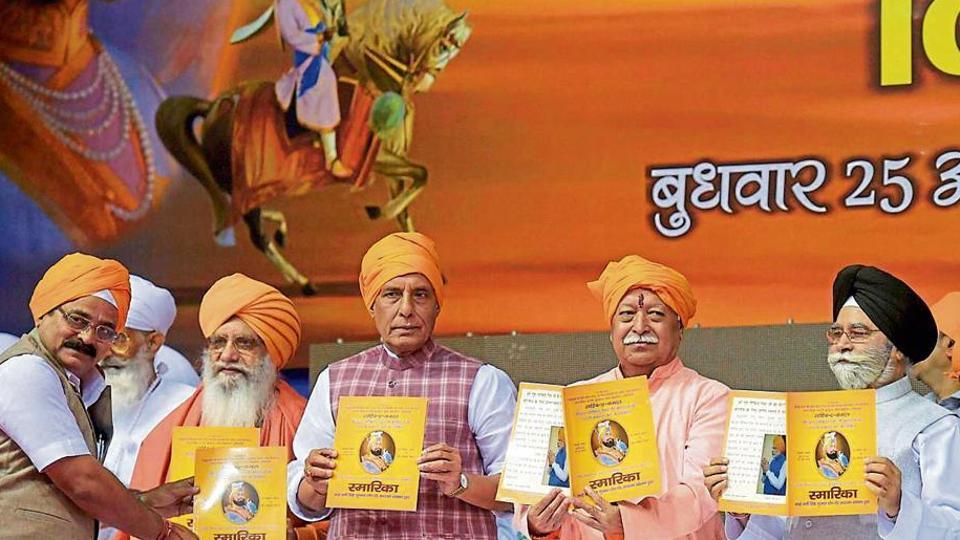 Chandigarh: There is something about Punjab and the Sikhs which stops the Rashtriya Swayamsevak Sangh (RSS) in its tracks whenever it tries to expand its presence in the volatile border state.

The last two years have been particularly bloody, with five top functionaries of the RSS and its affiliate organisations murdered by suspected Sikh hardliners. That the spate of violent attacks on leaders of the Hindu Right coincides with a resurgent RSS’s drive to broaden and deepen its presence in the state, and speaks of the continuing tension between Hindutva and Sikhism. This despite long years of the BJP’s alliance with the Shiromani Akali Dal (SAD), whose politics revolves around the Sikh religion. Indeed, the SAD-BJP alliance has always been spoken of as one which is the best combination of Hindu and Sikh interests in the state, making it hard for either to win without the other. But when it comes to the RSS or its Sikh affiliate the Rashtriya Sikh Sangat, even the Akali Dal draws a line.

Days before the Sangat held its widely-opposed event on October 25 to celebrate the 350th birth anniversary of Guru Gobind Singh, the founder of Sikhism, Ravinder Gosain, an RSS leader from Ludhiana, was shot dead by suspected Sikh hardliners. Earlier this week, another right-wing Hindu activist of the Hindu Sangharsh Sena, Vipan Sharma, was murdered in Amritsar. The two killings seem to be part of a pattern that began when Punjab RSS vice president Brig Jagdish Gagneja was shot at in Jalandhar in August last year – he died just over a month later.

History of friction between RSS and Sikhs

The animosity between the RSS and Sikh organisations dates back to the 1980s, when Sikh terrorists uprooted RSS shakhas from border areas of Punjab. It was Gagneja, the then vice president of the RSS in Punjab, who revived these outlying shakhas in the former militant stronghold areas in Tarn Taran and Amritsar, and most believe he paid with his life for doing so. But none of this has deterred the RSS and the Sikh Sangat from pursuing their activities. Never mind if all of Sikhism from the Akal Takht downward, including the Akali Dal, and all powerful Sikh head priests and even one BJP legislator from Delhi not only boycotted the event but forbade all pious Sikhs from attending it. Any association with the Sikh Sangat has been banned by the Akal Takht since 2004, as the apex Sikh body feels that the former has been formed by the RSS to subsume Sikhism into a Hindu identity. The event was attended by RSS chief Mohan Bhagwat, Union home minister Rajnath Singh and president of the Sikh Sangat Gurcharan Singh Gill. The Akali Dal’s refusal to attend the function has attracted the ire of Punjab BJP leaders, some of whom are openly saying that if the Akalis feel so strongly about not associating with the RSS, then why is the party continuing to be part of the NDA and sharing power at the Centre?

For the record, Sikh Sangat president Gill has said that the RSS, which “nurtures and supports us also respects our gurus and faith as a separate religion”. He has rejected all allegations that the RSS is involved in a subversive movement to merge the Sikh identity with Hinduism.

The Sangat works in Rajasthan, Haryana and Punjab to consolidate the RSS ideology and has been working alongside the RSS in its ‘ghar wapsi’ programme to re-convert Christians to Hinduism or Sikhism. And that’s where the trouble lies. RSS ghar wapsi programmes in Punjab focus on Christian missionaries and the organisation does not see any difference between Sikhism or Hinduism when it comes to welcoming Christian converts. As this correspondent noted in 2014, after touring the border areas of Punjab, RSS functionaries held ghar wapsi programmes in both gurdwaras as well as temples. Most of those who re-convert are from the scheduled castes and many were threatened with withdrawal of SC benefits if they did not convert. The RSS ghar wapsi campaign in Punjab irked the Akali Dal no end because in recent years, the party had managed to woo Christians in the border areas into its fold and Christian missionaries began complaining to the SAD leadership about the RSS’s activities. RSS workers also taunt Sikh groups and the Shiromani Gurdwara Parbandhak Committee in Punjab for not doing enough to preserve and protect the Sikh faith, claiming that they are doing more by enabling ghar wapsi. For the deeply-politicised Sikh clergy, which functions almost like an extension of the SAD, such charges are deeply unsettling.

Despite the SAD donning a secular garb in recent years, the Sikh realm guards its identity fiercely. Few care to remember that Sikh identity issues triggered the violent secessionist movement which raged in Punjab till the early 1990s. The Sangat, formed in 1986, has always been viewed with suspicion by Sikhs of all hues in Punjab because in the RSS’s larger scheme of a Hindu rashtra, Sikhism is seen as just another sect of Hinduism. In 2004, the Akal Takht banned the Sangat and forbade Sikhs from associating with it. And after its then president, Rulda Singh, was shot dead by Babbar Khalsa militants in 2009, the organisation has been virtually defunct in Punjab. Out of the 500 odd units that it runs, only 15 operate in Punjab. The rest are in Delhi, Rajasthan, Haryana, Uttarakhand and Madhya Pradesh. Since 2014, when the BJP formed the government at the Centre, the RSS and the Sangat have been trying to revive the organisation in Punjab by raising Sikh issues, but have been thwarted each time. Both moderate and radical Sikh organisations unite to defeat the “designs of the Sangh” to appropriate Sikh space. If the recent killings are an indication, there could be more trouble in the coming months as Hindu right-wing organisations up the ante in Punjab.

Chander Suta Dogra is a senior journalist. She is also a spokesperson of the Aam Aadmi Party.