Many within SSM are unhappy with the way the party has finalised candidates. Several farmers' unions which had initially supported the SSM have now withdrawn their support due to differences.

Jalandhar: Ahead of the February 20 polls in Punjab, Sanyukt Samaj Morcha (SSM), the political outfit of farmers, has been slowly and steadily losing support on the ground after the initial support it enjoyed when it was formed on December 25, 2021.

The situation has now completely changed, with traders, labourers and a large number of people who had supported it earlier now doubtful of SSM’s poll prospects. As a result, a number of farmers’ unions have officially withdrawn their support to SSM. There are also discordant voices with SSM over the selection of candidates and the failure to stitch an alliance with the Aam Aadmi Party (AAP).

Though SSM has fielded some highly educated candidates – Anuroop Sandhu from Muktsar Sahib seat, who is an M.Phil student at the Delhi University; Dr Sukhmandeep Singh from Tarn Taran seat, an MBBS student, who shelved his plans to pursue MD in the US and participated in farmers’ protest; Ravneet Singh Brar from Mohali seat, an MBA graduate and an agriculturist; Abhikaran Singh, a B.Tech from Barnala seat; and some others – the support towards the party has been diminishing.

To begin with, SSM enjoyed the support of 22 farmers’ unions, but now it has reduced to 13 unions. The SSM emerged from the Samyukt Kisan Morcha (SKM), an umbrella body of 32 farmers’ unions, which spearheaded the year-long farmers’ protest for the repeal of the three farm laws.

The SSM is contesting the Punjab assembly polls in alliance with the Sanyukt Sangharsh Party (SSP), headed by Gurnam Singh Chaduni of the BKU Chaduni union. While SSM has fielded 105 candidates, the SSP has given tickets to 10 candidates. Punjab has a total of 117 assembly seats.

Maninder Singh, a young supporter of farmers’ protest from Jalandhar, feels SSM lacks planning, and has doubts as to whether it can make a dent in the upcoming elections. His initial optimism over the formation of SSM has faded over time.

“Given the way SSM has distributed tickets to wrong candidates, its lacklustre campaign and lack of consensus among farmer unions, I feel it is on a sticky wicket. We wish SSM performs well, but it appears that it jumped into the poll fray without testing the waters,” adds Maninder.

Tejvir Singh from Ambala, Haryana, who was at the forefront during the farmers’ protest, says, “By not forming an alliance, both AAP and SSM will face setbacks. With major farmers’ unions leaving, the prospects of SSM are turning out to be poor. But still, I feel that this time, with a multi-cornered contest, people will cast votes for good candidates.”

A large number of farmers also share the view that SSM should have abstained from electoral politics, and instead, it should have acted as a “pressure group” in favour of farmers. Therefore, they say that they will support traditional parties with which they have been aligning with for long.

US-based doctor Swaiman Singh, who was at the Tikri border throughout the protests serving the farmers with free medical assistance, is also a part of the SSM. He questions SSM for offering tickets to candidates who have not even applied them.

Swaiman Singh says, “I signed up with SSM on the condition that tickets would be given to candidates considering merit and winnability factor. The SSM leadership accepted my suggestion, but tickets were given on the ‘quota system’, which was based on the farmer union’s strength. It would have been better if tickets were given to good candidates with political understanding.”

Swaiman also says that if SSM fails to deliver, it will be because of the selection of candidates. “We cannot turn a blind eye to this issue. That is why I expressed my concern on social media a few days ago. At some places, tickets were given to candidates who never even applied or appeared for the interview. Secondly, some candidates have a questionable background, which should have been checked earlier. SSM had even announced to form a committee for screening the candidates, but it exists on papers only.” 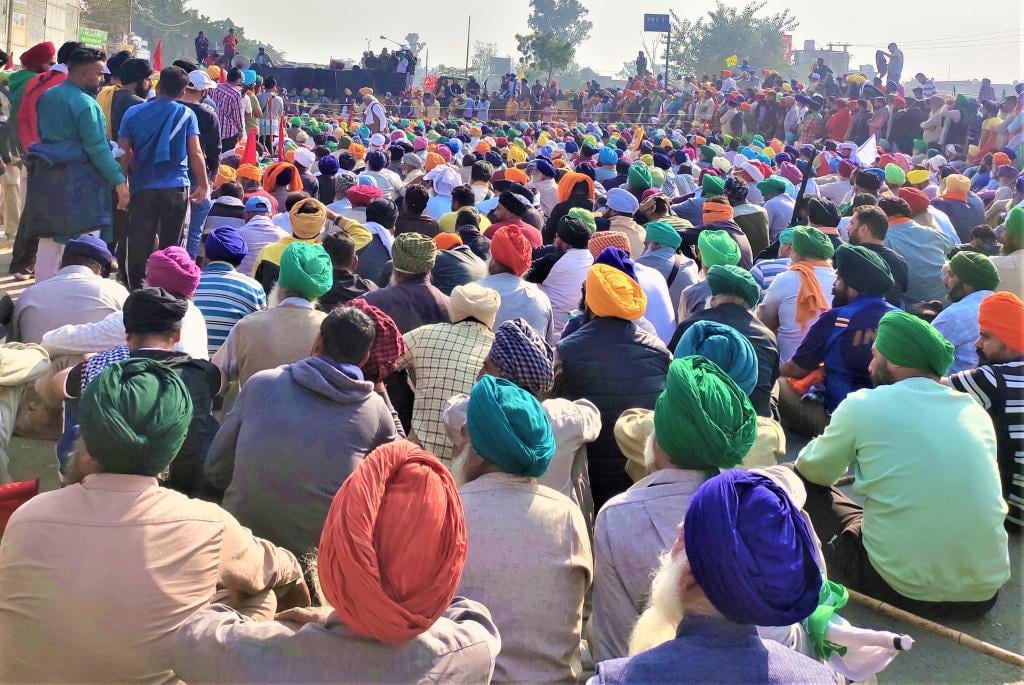 On SSM not being able to form an alliance with AAP, Swaiman says, “A party which remains silent on atrocities against minorities and federal rights cannot be trusted. Kejriwal never supported the Shaheen Bagh protests against the Citizenship Amendment Act (CAA). People are grossly mistaken about Kejriwal’s identity.

“In Punjab, he is trying to impose Hindi, whereas Punjabi is our mother tongue. Like any other state, Punjab has its own rights, but Kejriwal never spoke about Delhi not paying Punjab for using its river waters. I was strongly against farmers’ forming an alliance with AAP. It is good that we are fighting alone. We do want to compromise on our principles.”

Lashing out at Kejriwal, Swaiman claims that when farmers camped at the Singhu and Tikri borders for over a year, the Delhi government never sent its sanitation and water supply staff to maintain cleanliness at the camps. “We cleaned the blocked gutters and drains ourselves and arranged water supply on our own. Even during the deadly second COVID wave, we handled the medical emergency ourselves. Delhi’s AAP government never supported us.”

Speaking to The Wire, SSM leader Balbir Singh Rajewal, representing the BKU farmers’ union, however, feels they will be getting good feedback from the public within a week, and the situation on the ground will change in favour of SSM.

Rajewal, who is the chief ministerial candidate of SSM, is contesting from the Samrala assembly seat of Ludhiana district. He says that they have fielded some of the “highly educated and deserving candidates” in the poll fray.

But when asked about Swaiman’s allegations, Rajewal says, “Dr Swaiman served the farmers during the year-long farmers’ protest, but he is not associated with any farmers’ union. He is working to save Punjab. We received many applications, which were screened in a very short time. Despite the paucity of time, we have given tickets on merit. If Swaiman feels that some tickets were not given properly, that could be his observation.”

On AAP’s Punjab co-incharge Raghav Chadha’s statement that SSM leaders were “hobnobbing with BJP leaders”, making it a reason for not stitching an alliance, Rajewal responds: “AAP is deliberately making such statements. It is the B-team of BJP. AAP stands exposed and now it is trying to cover up its acts. AAP did not let our party get registered with the Election Commission of India (ECI). The ECI sought our reply and we replied within three days. We have demanded ‘tractor’ as our election symbol, but so far there has been no response.”

Rajewal even questions the ECI’s role and blames it for not being “impartial”.”I have no qualms in saying that ECI is biased. If it can provide a common election symbol to 10 people contesting together, then why not SSM, which has fielded 115 candidates? This is happening at the behest of BJP and AAP.”

Rajewal also says that “AAP is as bad as the Congress, SAD-BSP and BJP”. “We have fielded the best candidates. Even the NRIs who supported the SKM are supporting our candidates individually.”

On being asked if the SKM has shown the door to unions contesting elections, Rajewal says, “Rather they are feeling left out in the political race. There is no such issue as suspending the unions contesting polls. Majority is on our side, as 22 unions are with us and 10 unions have no right to expel us from the SKM.”

Senior BBC Punjabi journalist Pal Singh Nauli says people had a lot of hopes from the SSM, as they were fed up with traditional parties. But he feels SSM has squandered the opportunity.

Also read: Three Reasons Why Punjab Is In a State of Political Churn

“There was a space for a strong third front alternative, but SSM failed to fill that space. After all, people support that party which remains in the popular discourse. SSM is saying that it has little time to perform, but that does not mean it will field wrong candidates. Barring some names, many candidates with questionable backgrounds have put the SSM in a bad light,” he adds.

The senior journalist also feels that it is not important for the SSM to contest elections in all 117 seats. “SSM could have contested in 25 seats by fielding strong candidates to remain a strong pressure group for other parties too. The laxity of SSM in selecting the candidates is likely to cost them dear. Serious allegations are being levelled against SSM, as it ignored giving tickets to some deserving candidates who participated in the farmers’ protest wholeheartedly.”

Pointing out some instances, Nauli says that in the Jalandhar North assembly seat, SSM gave a ticket to ex-Congress councillor Des Raj Jassal. “The key contest in Jalandhar North is between Congress and BJP. Jassal will directly affect Congress votes to help BJP. The SSM leadership should have taken such factors into consideration, but it didn’t. Similarly, a household name in the farmers’ protest Jarnail Singh Gardhiwala from Kandi Kisan Sangharsh Committee was denied a ticket from the Sham Chaurasi reserve seat in Hoshiarpur district. His contribution during the year-long farmers’ protest has been ignored.”

Echoing similar sentiments, Kirti Kisan Union leader Rajinder Singh Deep Singhwala and BKU (Ekta Dakaunda) president Buta Singh Burjgill say, “We have always been clear on our stand that neither we will contest the elections nor we will support farmers contesting polls. It is SSM’s call to contest polls, so we are not with them.”