Why Do People Go to the Dera?

Apart from the mythic value and the personal charismatic appeal of the babas, deras in Punjab also offer a sense of security to their followers. 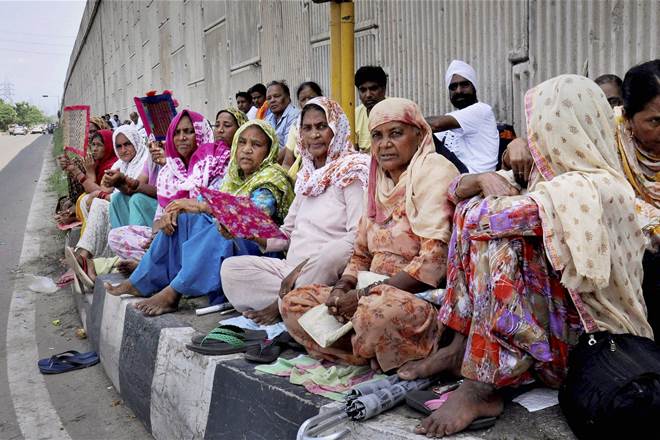 Why do people go to the dera? Without undermining the spiritual value that a visit to a dera has for a devotee, some of the more mundane reasons too are by no means insignificant. The most frequently stated reason for going to the dera is the fact that it fulfils one’s mannat, literally meaning a wish or desire. ‘If you have pura vishwash (complete faith and trust), your wish will certainly be fulfilled.’ The most important of these mannats is the desire to have a male child. The patriarchal ethos of agrarian Punjab not only helps prenatal sex determination clinics to flourish, but also seems to sustain the babas and deras.

An equally important reason is the code of conduct that the gurus at deras insist upon for their followers, the most attractive of these being the insistence on giving up consumption of liquor and other drugs. It is invariably the women of the house who insist on visiting the dera and given the spiritual sanctity of the act, they manage to take their husbands and other male members of the family along. However, once they are sufficiently motivated, the men are encouraged to take naam< from the guru. Taking the naam would require a pledge from the devotee to a life of discipline, which may include giving up consumption of alcohol and, in some cases, even caste identity. Incidentally, there is no conclusive evidence to suggest that the growing popularity of such babas has made any difference to the alcohol and drug culture of rural Punjab.

Apart from the mythic value and the personal charismatic appeal of the babas, the deras also offer a sense of security to their followers, a personal touch, something completely missing in the mainstream gurdwaras or temples where one feels anonymous, a part of the crowd. As Jagroop Singh, a scholar who has been working on deras, mentioned: “Deras give their followers a sense of security and belonging. Once you are inside the dera you feel like you belong to the community. Somehow they feel that the dera is a secure space. It belongs to everyone. No one will bother us here. This is particularly important in the context of growing insecurity all around.”

Deras are invariably non-sectarian in nature. Even when they have acquired the status of a sect, they do not insist on being part of an exclusive normative system for the adherents. Dera identity has traditionally been more like an ‘add-on’ identity. One continues to be a Sikh or a Hindu or a Muslim and still gets blessings or naam from the guru or the pir at the dera. Not only would a typical devotee of a dera continue to visit the more ‘mainstream’ shrines of their respective faith systems, s/he would invariably visit more than one dera and could in fact have multiple gurus.

Notwithstanding the spiritual self-image and identity of the babas and their deras, they are not free from more mundane concerns, such as land, money and power. Some of the deras own substantial amounts of land. One of the deras I visited in a village called Dhianpur in Gurdaspur district owned nearly 600 acres of land, the entire land of the village. Local cultivators were all tenants of the dera. Another dera in the same district reportedly owned nearly 4,000 acres of land. One of the residents there said, “This dera is like a mini empire. All the land that you can see from here belongs to the dera. Land was given to us first by some Mughal rulers and later by Maharaja Ranjit Singh.” Bigger deras such as the Radhasoamis and Sacha Sauda would have even more land. The land ceiling laws do not apply on dera lands.The Radhasoami Dera actually has a land acquisition officer. And given their spread across the country, these assets are indeed substantial.

Apart from the fixed assets, deras also get regular income in the form of offerings and contributions from visitors. “Once a dera acquires a name, money comes without much effort. Though the followers are invariably poor, the deras are mostly rich,” reported Sukhdev Singh Sohal, a historian at the Guru Nanak Dev University. Even a relatively unknown dera could attract substantial donations. Devinder Kaur, a student of political science at the Guru Nanak Dev University who is writing her dissertation on one such dera of a sufi pir called Dera Baba Shekh Phatta, estimated that the daily remuneration of the dera is around one lakh rupees. The dera is being managed by a group of local entrepreneurs who pay an annual sum of Rs 80 lakh to the Waqf Board as contract money. The right to manage the dera is auctioned every year by the Waqf Board and the highest bidder gets the contract.

Given their material resources and persuasive power, deras have begun to influence the political process in the state as well. Bhupinder Singh Thakur, another scholar working on the deras in Gurdaspur district reported that, “Though most of them do not openly support any political party, they indeed convey their preferences to their followers.” It has become almost mandatory for the political elite of the state to visit prominent deras at regular intervals and seek ‘blessings’ from the babas. This obviously gives the babas a sense of power and influence.

It is this growing influence of the babas that worries the mainstream Sikh leadership which identifies with the Shiromani Gurdwara Parbandhak Committee.

The rise of the Singh Sabha movement during the late 19th century and the gurdwara reform movement in the 1920s marked an important turning point in the religious history of Sikhs and contemporary Punjab. The formation of SGPC not only brought the historic gurdwaras of the region under the control of one body, it also codified what it meant to be a Sikh. In his well-known, though controversial book, The Construction of Religious Boundaries, Harjot Oberoi describes this as an epistemic shift.

The new Sikh elite that emerged under colonial patronage transformed a rather loose faith tradition into a well-structured religious system and rewrote the social grammar of Sikhism. The peasants and common people in Punjab practised an ‘inherently contaminated and plural’ way of life which was undermined and a new identity emerged where the Sikhs began to see themselves as a religious community endowed with their specific history, sign, space and tradition. Through different sets of activities, this elite succeeded in injecting a new definition into ‘the everyday life of the faithful.’

Oberoi’s book was widely criticised for presenting an exaggerated view on the historical shift during the colonial period. Some took it as an insult to the faith and Sikh sensibilities and criticised Oberoi for being anti-Sikh.

How does one look at the contemporary reality of popular religiosity? Does one see it as a reality that always existed? Were the historians wrong in their formulation about the change in religious geography of Punjab during the colonial period? Did the pluralistic traditions disappear or even decline substantially? Or should we look at the current popularity of the babas and deras as reflecting a resurgence of popular religiosity in post-modern times, where deras become attractive and fashionable in a context where community life is fast disintegrating? Should we look at deras as open and casteless spaces where Dalits and the marginalised peasantry experience a sense of security and relief, away from the hostile realities of caste violence and agrarian crisis?

The secular institutions and social movements that once articulated the discontent and aspirations of the marginals have simply disappeared from the soil of Punjab. There are virtually no civil society organisations or NGOs active anywhere in Punjab. It is possible that some or all of these processes have been in operation to produce the current state of affairs.

Surinder S. Jodhka is a professor of sociology at Jawaharlal Nehru University.

This article is extracted from an article in Seminar published in 2008.