With the BJP-led government and its supporters taking the lead in fanning anxieties, aggressiveness and hyper-nationalism have taken centre stage.

Protestors raise slogans during a demonstration against the Pulwama terror attack. Credit: PTI

The national capital and several other parts of India on Saturday, February 16, witnessed a cycle of extraordinary events.

Since early in the morning, reports started pouring in of Kashmiri students being harassed and even physically targeted across many parts of India – including a frightening episode in Dehradun where a mob led by Bajrang Dal surrounded a women’s hostel that housed a few Kashmiri girls.

However, in their excitement to give a “fitting response” to Pakistan – which the Indian government holds responsible for the Pulwama incident – the authorities have seemed reluctant to take a step back and address the chaos that appears to be building up.

In light of one of the most deadly militant strikes on CRPF jawans in Pulwama on 14 February, the political class, across party lines, has pledged to support India’s fight against terrorism. This may require serious political, military, and diplomatic planning, but the emotional outpouring in the last couple of days by some TV anchors – who have uninterruptedly advocated “revenge” for the dead soldiers – has led to a social problem that needs immediate attention.

Ever since the prime minister, in his very first message to the nation after the incident, declared that the militants have already blundered and will now have to pay a heavy price for the strike, the mood in India has been belligerent.

This was reflected in the way Congress leader and TV celebrity Navjot Singh Sidhu was hounded out from a popular entertainment show.

Sidhu, a part of the popular comedy programme, “The Kapil Sharma show”, was shown the door by Sony TV after he said the following in a media interaction:

He added that dialogue with Islamabad should continue.

“Wherever wars are fought and such things (terrorist attacks) happen, dialogue also continues simultaneously. There is a need to find a permanent solution to (issues between India and Pakistan). Such people (terrorists) have no religion, no country, and no caste. When a snake bites, its antidote is also snake poison.”

These words, which would strike analysts anywhere in the world as being reasonable, were, however, enough for social media trolls to take aim at him with a bitter, collective force.

#BoycottSidhu, #BoycottKapilSharmaShow and #BoycottSonyTV emerged as the top three trends on Twitter through the day. Personal barbs, abuse, and verbal assault were hurled at him and Sony TV by many, including a few Bharatiya Janata Party’s spokespersons like Tajinder Pal Singh Bagga.

This forced corporate entity Sony TV to cave in and immediately replace Sidhu with another popular celebrity, Archana Puran Singh. A Sony TV official put forward a justification to The Indian Express,

“His remarks have not been taken kindly by most. Also, the channel and the show was getting dragged into the unwanted controversy. This is when the team amicably decided that Navjot make a distance from the show. The team has already shot a couple of episodes with Archana.”

Sidhu also questioned the government on why it sent the jawans by road to their camps instead of flying them in despite having had intelligence inputs of a terror attack, but the hostile media campaign took no note.

The Pulwama attack also appeared to have become a publicity gimmick of sorts for some celebs. Sonu Nigam, whose fortunes as a playback singer in Bollywood have dipped in recent years, uploaded a self-shot video to showcase his anger. In a sarcastic tone, he took several digs at the secular-minded people of India to claim that they do not give a hoot about country’s security. He also tried to revive controversies from the past to assert his nationalist spirit.

Similarly, right-wing actors like Anupam Kher and Paresh Rawal used their Twitter handles to spew hatred against Pakistan. While Kher tried to whip up middle class guilt by reiterating how the jawans died for the nation while professionals were in their comfort zones, Rawal, a BJP MP, sharply upped the rhetoric:

An Humble appeal to our national news channels. Plz don’t invite any Pakistani or Indian terrorist sympathisers to spew venom against our dear motherland . Those rabid dogs are not allowed in our homes . Let those maggots die in their own filth .

An invitation to ‘mourn’

As such reports came to the fore, residents of north India started receiving text messages on their mobile phones about candle-lights marches to pay respect to the martyred soldiers in their localities.

Between 6 and 8 pm, north India witnessed several marches that were anything but a peaceful homage to the dead.

While children and and senior citizens handled the candles, many shouted slogans against Pakistan, called for revenge, and yelled war cries.

In the national capital region, many localities and public places – from parks to malls – across Delhi, Noida, Gurgaon, Ghaziabad and Faridabad were filled with shouts of revenge. The so-called “spontaneous” meetings were led by the area’s BJP workers. 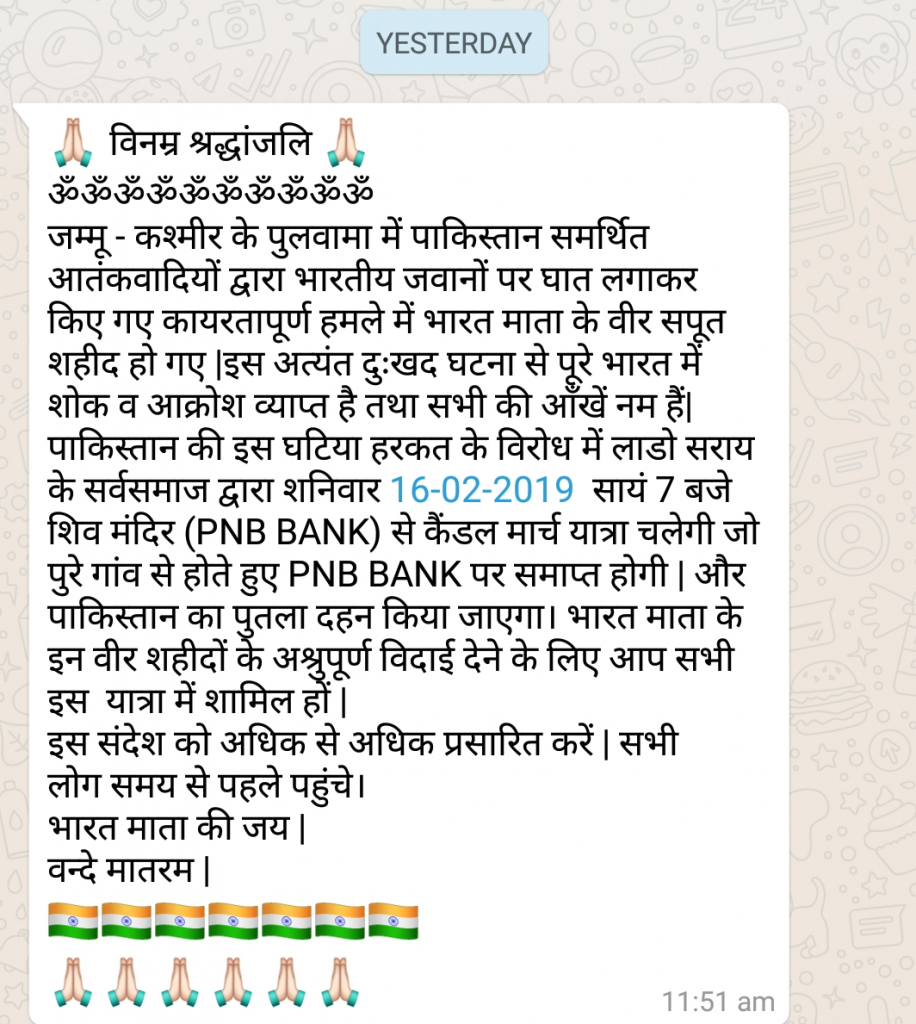 In some of these marches, however, activists shouted communal slogans:

For generations, India has valued taking a mature stand in the face of self-destructive attitudes. Right from home to government, ordinary men and women have associated India’s well-being with the idea that society must be harmonious.

In this context, the events in the aftermath of the horrific killing of the CRPF jawans are unnerving, to say the least.

The primary reason it is unnerving is because of how the government of the day is breaking away from the tradition and whipping up a hysteria that could have severe consequences for India’s 130 crore population, a figure prime minister Narendra Modi has brought up repetitively in his speeches.

The government, instead of addressing people’s sense of insecurity, finds it easier to talk about revenge.

This is why the campaigns appear orchestrated and not spontaneous, emotional outpourings.

The BJP-led government and its supporters have taken the lead in fanning current anxieties. Such is the belligerence of the campaigns that even the government’s critics are struggling to handle the political consequences.

Soon after the attack, the prime minister urged others to refrain from political one-upmanship over the  Pulwama attack. BJP spokespersons also said that Modi would suspend his political activities.

Yet, the PM has turned government events over the last two days – from the flagging off of the Vande Bharat Express to the inauguration of defence corridor in Uttar Pranesh’s  Jhansi – into semi-political rallies and platforms for BJP’s electoral messaging.

His speeches revolved around how India is outraged by the Pulwama attack and indicated that a strong military response to Pakistan may be on the cards and asked people to vote for a strong government – one of the many saffron party’s posturings.

Is the government using the dreadful Pulwama attack for political gains? This is a question that will be asked in the days ahead as the national election nears.

After all, the Modi government has been battling allegations of corruption in the Rafale aircraft deal, facing flak for rising unemployment and an unprecedented agrarian crisis in the country. The saffron party is still recovering from electoral losses in the recent assembly elections.

A moment of reflection

Amid this aggressive political mood, a conversation between two migrant daily-wage workers in Lado Sarai, New Delhi, as Saturday’s “candle-light march” passed by their homes, was strangely reflective.

A and B – both middle-aged – were watching the rally from the tiny balconies of their small 10 by 10 feet single-room home, where they stay with their families.

A on the third floor:  Aap nahin gaye isme? (You didn’t go to the march?)

B on the second floor: Main nahin gaya, rajniti chal rahi hai. (I didn’t go. Politics is happening over the incident)

A: Kaise? Aisa kyon kaha rahe hai? (How? Why are you saying that?)

B: Bas. Lag raha hai ki Modi ko jo chahiye tha woh usey mil gaya. (Just like that. I feel that what Modi wanted, he got.)