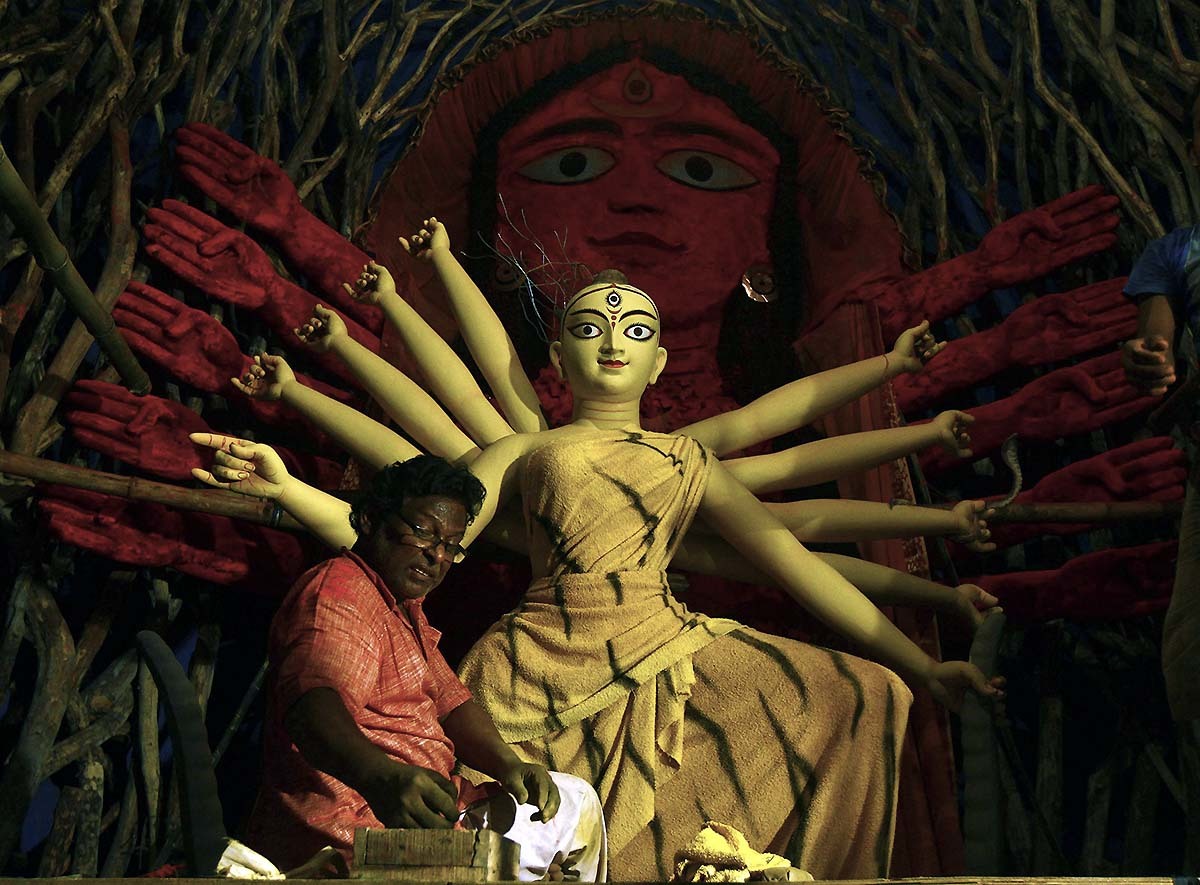 Ideological issues that drive regional parties are, by now, fairly well-known to those who may otherwise have little interest in either these causes or in the parties. The two DMKs in Tamil Nadu espouse Dravidian interests over ‘upper-caste hegemony’, the Shiv Sena cries for local Maharashtrians, the Asom Gana Parishad agitates for the true Assamese, the Akalis for Sikh interests, Mayawati for the Dalits and so on. But what exactly does the Trinamool Congress (TMC) stand for and how does it grow from strength to strength?

Now that it is abundantly clear that its leader strives for a far bigger role in national politics well beyond her own state and drops occasional hints about who should occupy India’s top post, we may as well take a look at her brand of politics. And since Bengalis are associated all the time with fish, football, politics and Durga Pujas, we may focus on two of these here – politics and Durga Pujas.

Those who have observed Mamata Banerjee closely recall her single-minded obsession to oust the most well-entrenched party in India’s history, the CPI(M) – that ruled West Bengal for 34 long years, an all-India, all-time record. To understand how Banerjee did the impossible in 2011, we may give some credit to her astuteness in forming an alliance with her bête noir, the Congress, from which she broke off in 1997.

But to explain why she could capture six times the number of seats as compared to the last elections while her partner, the Congress, could only double their tally, one has to understand why she had branded her party as trinamool or ‘grass-roots’ and also see how she utilised Durga Pujas. As a street fighter, she had realised by 1997, when the Left Front celebrated 20 years of unbroken rule, that the traditional Congress would never be able to remove the Left. The latter had an unmatched and dedicated cadre at the level of the smallest spatial unit – the mohallah or paraa as it is called in Bengal. This ensured that every name on the electoral roll was under their scanner and those who had left either the locality or the world were their special targets. Critics say that their votes were cast by the Left ‘cadres’, who also ensured through various methods – from the seductive to the coercive – that voters did well to vote for them.

During my tenure as the chief electoral officer of the state during the 1998 and 1999 parliamentary elections, many leaders confided in me that ‘false voting’ was a zero-sum game: political parties actually negated each other’s gains and the ruling party gained but only marginally. Besides, after the introduction of the voter’s identity card and electronic voting machines – before they became suspect – false voting became really difficult as did ‘booth capturing’ and ‘booth jamming’.

The more important issue was that the Congress in the state just wilted on its own and withered once it was out of power for a decade and could no longer dole out patronage. Unlike the Marxists, it was not genetically programmed to be on 24×7 alert mode nor did it ever have so many supporters at the street, village or paraa levels who could be ‘looked after’ round the year. This is where local clubs and Durga Pujas came in handy to Mamata Banerjee, who needed a trinamool response. Since the Left had penetrated every organisation and had monopolised every occasion or event, except the religious, she got in through the only gap that appeared in the ‘Chinese wall’ of the Left – Durga pujas.

During the Left regime, local clubs also looked around desperately for political patronage, especially to negotiate with the local police and municipal authorities. Even as an opposition party, Trinamool Congress was capable of creating major disturbances anywhere anytime, and wiser local-level officials cooperated with their leaders. The Left government never bothered as it viewed these as petty religious indulgences, not anti-government agitations. 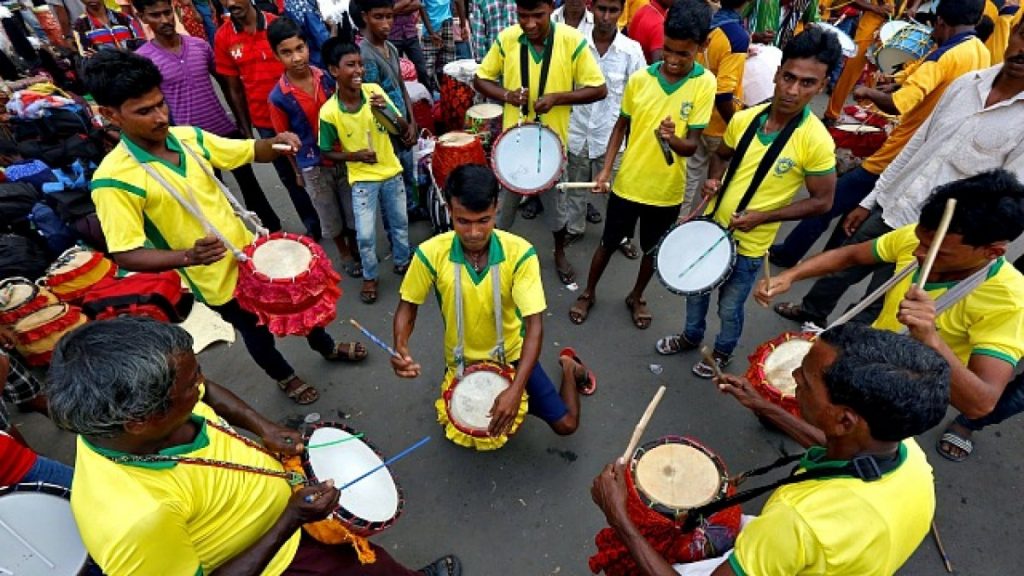 Men beat the traditional drums called ‘Tasha’ to attract the organisers to hire them to perform at pandals of Durga Puja in Kolkata. Credit: Reuters

That base-level relationship is now ‘legitimised’ and the local councillor is undoubtedly the kingpin, whose spokes of power are the paraa clubs. A cosy relationship exists with the local police, the municipal and other inspectors and musclemen now that the high moralising of the Left Front is gone. These groups, often called ‘syndicates’, are not generally aggressive or overbearing – many actually look up to them. But the moment one needs a special dispensation like renovating or repairing one’s house or extending a portion – legally or illegally – or even building a new one, it has to be ‘permitted’ by the ‘local syndicate’. The same applies to businesses and hawkers in the locality, most of which operate on the margins of municipal, police and other regulations and many simply transgress all of them.

Power rests squarely with the local leader or the councillor or the MLA or syndicate boss – they are often the same person or part of a closely bonded brotherhood. When they are not, bloody turf wars rock the locality, and intra-party feuds are very much a part of toady’s Bengal. The model operates reasonably smoothly and has progressed a lot since local musclemen first appeared under the previous Left regime – who compelled land developers and promoters of buildings to source their supplies of brick, sand, stone chips and the like from them, or face consequences. Under the present dispensation, it has reportedly been ‘improved’ – to fixed rates per square feet thus built.

While newsmen report or bemoan the attention the CM gives to local clubs, few ever recall how they helped Banerjee in her days of struggle. This explains why she makes Herculean efforts every year to ‘inaugurate’ literally hundreds of Durga Puja pandals, spread over quite a few days, displaying her affection and strengthening her bonds with the organisers and the voters. This confers ‘legitimacy’ on them and passes on silently but effectively the desired message to local officials.

Incidentally, accounts till last year show that the state government has given well over Rs 600 crore to local clubs – for the ‘development of sports’, of course. We must put in a caveat here that not all local clubs are hers nor are all the pivot of the local syndicates. But, by and large, this holds good and the components of this architecture are constantly improved upon and re-engineered.

This year, for instance, many of her ministers and party leaders publicly ‘kick-started’ in quite a few localities the long-drawn process for the mega event of the year, the Durga Puja – through a previously innocuous religious event called Kunti Puja. Tapati Guha Thakurta has proven through her detailed research that Durga Pujas in Kolkata have become inextricably linked to political patronage. I agree, but my arguments are a bit wider – that these paraa clubs and pujas helped Mamata Banerjee craft a unique Bengal-specific strategy that won her the crown and, more importantly, that her power politics soon went beyond Durga Pujas. 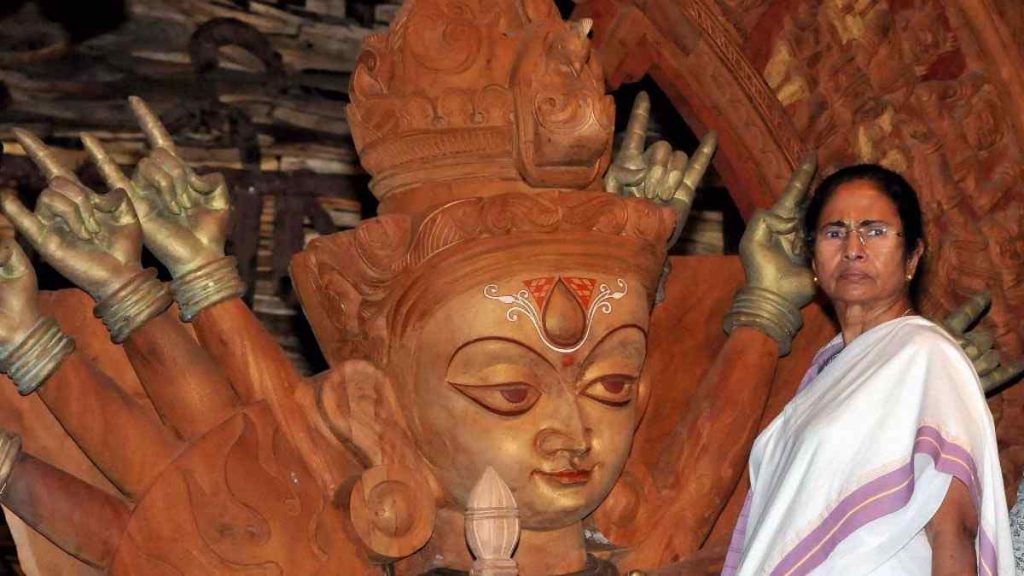 ‘Non-political’ nature of pujas in Bengal

Though Durga Puja pandals have already started choking several main public thoroughfares more than two months before the celebration, there are so many other gods and goddesses that are scheduled to be worshipped before Ma Durga arrives. There is Manasa puja, Krishna Janmashtami, Ganesh Chaturthi, Vishwakarma puja, Jhulan jatra for Radha-Krishna, Rakhi and what not. No one even notices the irony of Sitala being worshipped on such a grand scale some 20 years after the eradication of smallpox. Even Shasti, the goddess of fertility and infants, now has a renewed lease of life through pre-natal and post-natal mortality rates have improved so drastically and birth control is a must. And then, a large number of village deities have also started migrating to the cities, just like Satyajit Ray’s Apu. Not only that, many of their images are now almost as big as Durga and festivities often continue for several days because indigenous deities have flexible rules that are less Brahmanical. In her last public address, the chief minister herself rattled out a never-ending list of gods and goddesses who are worshipped in Bengal at present.

Besides, gods and goddesses are now imported from other states as well. It began with Santoshi Ma and moved on to Ganesh, who is worshipped so increasingly and pompously that in a few years, Kolkata may rival Mumbai. In the last three years, Ram and Hanuman have also entered Bengal with a bang, literally. Of late, they are not mascots of just one political party – their worship has spread so much that their bitter political rival party is giving stiff competition. And this is precisely the point – politics – and we need to come to terms with this most visible assertion of power in West Bengal under Banerjee.

There are no ‘low key’ community pujas any more, and even Kali, Saraswati and Vishwakarma who trailed Durga by miles in the past are now big budget affairs. Kartik Puja is not rare anymore nor is it confined only to the ‘prohibited areas’ any more. And Shivaratri is not the quiet vow of some determined women, it is now a grand public event with music, lights and decoration. Even Shravan is becoming as much of a headache in Bengal as it is in north India, where boisterous Kanwariyas are a veritable threat to normal life – in trains, buses and to traffic as such. The question is: why so many?

My contention is that the more the number, variety and frequency of paraa pujas, the more does it help to democratise power within the localities and the party. Multiple pujas offer rival local leaders the opportunity to showcase their organisational skills and fund-raising capabilities. More pujas also help frequent connection with voters at the ‘non-political’ socio-religious level, where everyone is invited. Needless to say, finances obviously flow in but what makes these pujas so popular is the free entertainment that they offer to the broadest base of the socio-economic pyramid in our towns and large villages. The clubs that organise these pujas compete with deadly seriousness to ensure as many evenings of popular music and performances as they can. The latest attractions are the prized ‘DJ nights’ and raucous, ear-shattering music. Since folk pujas are not bound by the tight, fixed dates of Durga Pujas, organisers book well-known singers or actors on mutually convenient dates.

This ‘staggered’ date system also means that people from different areas get a chance to enjoy the entertainment dished out by different clubs in other localities during the puja evenings. This is ‘critical’ business, as the prestige of the club is involved along with the local pride of the par, and the organisers go to great lengths to succeed. And then there is the bhog or the common feast that local leaders offer their core supporters or to their paraas, which again is an exercise in redistribution of economic gains. It fits in so well.

The upper layers of the society that complain about roads being blocked or the loud nature of these ‘subaltern celebrations’ need to realise the gradual takeover of both the spatial and aural worlds by a confident and assertive new class. It also indicates the shrinking domain of the erstwhile higher-educated ‘intellectual’ or better-off strata in the politics of the state. Those who feel disheartened with open political patronage may do well to recall that community pujas were invented for a political purpose – to mobilise mass support for the Congress. It all began in 1893, with Tilak’s experiment with public celebrations of Ganesh Chaturthi in Maharashtra. Then, in 1910, the first community Durga Puja was organised to coincide with the Congress session in Kolkata, with politics in mind. Mamata Banerjee is, after all, of the true Congress stock, and is more socialist than the Left Front, an aspect we did not dwell upon today.