Promoter of Company in Default of Rs 650 Crore Has Ties to Piyush Goyal, Family

Goyal was director of Shirdi Industries till 2010, owner of defaulting company gave unsecured loan to firm owned by Goyal's wife of Rs 1.59 crore. New Delhi: At a time of mounting public concern over the bad debt of banks, does a minister have a responsibility to declare his interest in a company of which he had been director when it was under financial stress and which later, after he exited, defaulted on loans totalling Rs 650 crore?

The company is the Mumbai-based laminates maker Shirdi Industries. Its chairman until July 2010 – a period when loans were raised and delayed payments first red-flagged by Crisil – was Piyush Goyal, now railways minister and the Modi government’s chief troubleshooter.

Even as they defaulted on the money they owed government banks, Shirdi’s promoters also extended an unsecured loan via another entity to a company run by Goyal’s wife, Intercon Advisers Pvt Limited. This loan, they told The Wire, was granted “out of friendship.” The last statutory filing done by Intercon for FY 2016 shows an outstanding amount of Rs 1.59 crore to Asis Industries, a company owned by Shirdi promoters. Even as Asis extended its loan to Goyal’s wife’s firm, Shirdi also had a Rs 4 crore provident fund default.

Shirdi Industries has not only defaulted on loan repayments but was also referred to the National Company Law Tribunal where its creditor banks agreed to take a 60% haircut – banking parlance for a part write-off – on the debt owed by the company.

Though the haircut taken by banks may by itself be valid under law, the fact that Shirdi was once headed by a Union minister, that its promoters have given an outstanding loan to another entity owned by the minister’s wife, and that the promoters of the company were linked to a firm owned by the minister’s brother – all make the company’s fate a matter of public interest.

Exception made for Shirdi promoters 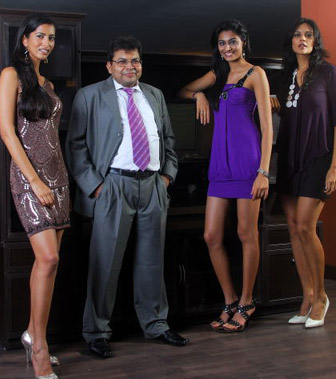 Unusually, the NCLT, in a landmark order last December, allowed the promoters to bid for the company because its lenders  – most of which are government owned – reposed faith in them.

The NPA ordinance was designed to ensure promoters did not get to borrow money from banks, run up huge debts and then have those debts written off only to come back and take control of their (now financially healthy) companies once again at a cut price.

The tribunal said it made an exception to the new law because 99% of Shirdi’s lenders had approved of the resolution plan – in which Shirdi’s promoters were the sole bidders – before the ordinance was announced.

Shirdi had started delaying various payments when they fell due even during the time Piyush Goyal was chairman between 2008 and 2010, and formally started to default on loan payments from 2014 onwards. The consortium of banks that lent to it assigned the loan to asset reconstruction companies (ARCs) — JM Financial and Edelweiss. As Business Line reported, “In July 2015, the ARCs restructured 82% of the loan with promoters infusing funds, issuance of equity to banks and repayment being made till March 2022. However, Shirdi Industries was declared sick due to liquidity crunch and SBI was appointed an operating agency to prepare the revival plan.”

The banks include Union Bank, State Bank of India, Uco Bank, Bank of India, Indian Bank and Standard Chartered Bank. They have agreed to take equity in Shirdi in lieu of partial repayment.

Relationship “of a very loving nature”

“Piyush is a very close friend of mine since 1994,” says Rakesh Agarwal, the promoter of Shirdi and its parent company, Asis India. Agarwal says their families are also very close.

“My relationship with Piyush is of a very loving nature and a very respectful nature but I have never used that relationship or taken benefits from it. We don’t come from that sort of culture,” he told The Wire.

In 2010, when Shirdi Industries had filed for an IPO with the market regulator, Securities and Exchange Board of India (SEBI), it had listed Piyush Goyal as its chairman and non executive director.

Moreover, filings made with the registrar of companies (RoC) reveal that Goyal was a director on Shirdi from April 2008 to July 2010. He was until September 30, 2009 a whole-time director, after which he resigned and became a non-executive director.

“We were interested in having our friend (Piyush) on board to guide us. So he was on board for a few years. But after that we have never taken advantage of that,” says Agarwal

A Crisil report of 2010 reviewing the proposed IPO noted that Shirdi had poor corporate governance practice and that the company was struggling to make payments to banks.

“Further, over the past two years, the company has been consistently making delayed payments on bank dues and statutory dues like provident fund, investor education and protection fund, employee state insurance and government taxes. While the company has started making payments on time since July 2010, it continues to remain a key monitorable,” says the November 2010 Crisil report. 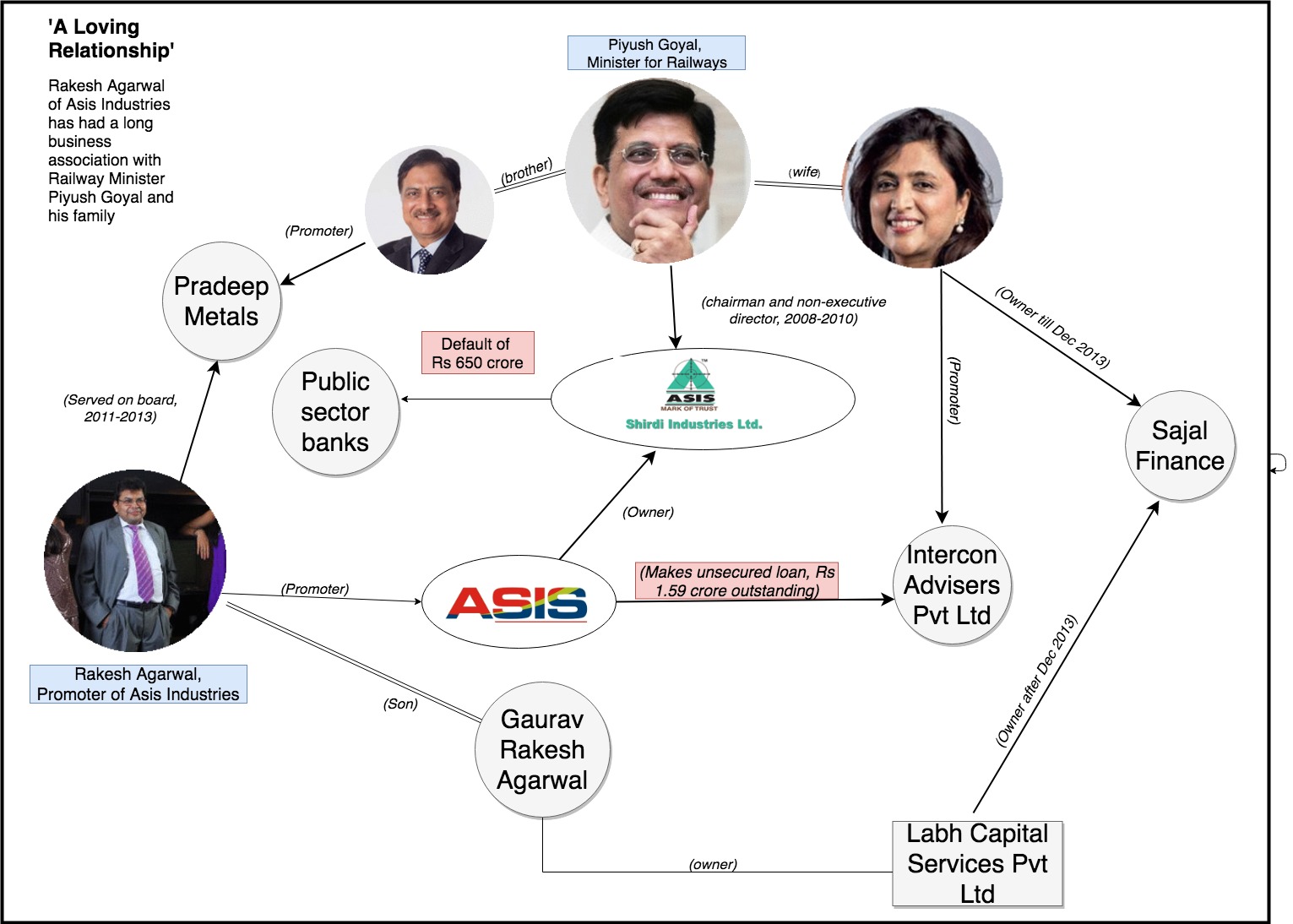 Agarwal was also on the board of Pradeep Metals from August 2011 to April 2013. Pradeep Metals is promoted by Goyal’s brother Pradeep Goyal. “Pradeep is also a dear friend and I resigned from the board to focus on my businesses,” says Agarwal.

That’s not all. According to filings made with regulators, Intercon Advisors Private Limited – a company wholly owned by Piyush Goyal’s wife, Seema, and son, Dhruv Goyal – lists an outstanding unsecured short-term borrowing of Rs 1.59 crore from Asis Industries in FY 2016 – an “inter corporate deposit repayable on demand” at 12% interest.

Agarwal denied there was anything untoward in his company – whose subsidiary was defaulting on money owed to government banks – making an unsecured loan to a company owned by a minister’s wife and son.

“This amount (unsecured loan) was given a few years ago. At that time we had money and I was requested if I can spare money and given our friendship I did. But this loan was given from Asis Industries, which is the holding company of Shirdi. Asis, therefore, is not the defaulter company,” says Agarwal. He would not say when exactly this loan was first made.

Questions to Piyush Goyal remained unanswered till the time of publication, His answers will be added to this story when they are received.

Coincidentally, Piyush Goyal has been a government nominee on the board of two state owned banks – Bank of Baroda during the Vajpayee-run NDA government, and State Bank of India from 2004-2008 during the Manmohan Singh government’s tenure. It is only in 2008, after he exited the SBI board, that Goyal became chairman and a director of Shirdi Industries according to filings made by the company.

Other companies of the Asis group have also defaulted on loans to public sector banks. Asis Logistics’ loans totalling almost Rs 60 crore from Dena Bank, State Bank of India and J&K Bank have been declared NPAs.

Acknowledging other loan defaults, Agarwal says the group is in the final stages of negotiating and concluding agreements with banks. “Unlike other defaulters, we are still here and fighting from the front. We haven’t closed operations in any of the firms,” Agarwal told The Wire. Besides Asis Logistics and Shirdi Industries, Agarwal confirms two more firms of the group – ASIS Plywood and Asis Global – are also loan defaulters. “But the loan amounts there are small,” he says.

From trade and customs clearing to laminates

Shirdi Industries was originally incorporated as Shirdi International Engineers Private Ltd in December 1993. It was later renamed Shirdi Industries in June 1997. The company started off as an advisor in foreign trade and investment. In 1997, it expanded into customs clearing and forwarding services. Ten years later, it got engaged primarily in the manufacture of MDF.

Shirdi is promoted by Rakesh Agarwal,  Sarvesh Agarwal, Mukesh Bansal and Hariram Agarwal along with corporate promoter Asis Industries. The promoters of Asis are Rakesh Agarwal and Mukesh Bansal. Agarwal started as a lecturer at REC, Kurukshetra and later worked with the Ministry of Power and the Directorate General of Technical Development (DGTD), a department under the Ministry of Industry, GoI. In 1993 he promoted the Asis Group, which now has interests in the interior furnishing industry, logistics operations and software systems. Mukesh Bansal started as a partner in a customs house, which was later acquired by the Asis Group. Hariram Agarwal has served in various departments in the government of Uttar Pradesh.