He Came, He Spoke, the RSS Conquered

Pranab Mukherjee called RSS founder Hedgewar a 'great son of India', the same man who said Muslims are 'Yavana snakes', who should be seen with suspicion.

Former President Pranab Mukherjee with RSS chief Mohan Bhagwat and other leaders at the closing ceremony of Tritiya Varsha Sangh Shiksha Varg, an (RSS) event to mark the conclusion of a three-year training camp for swayamsevaks, in Nagpur on Thursday, June 07, 2018. Credit: PTI

It says something about our times that the whole nation was glued to their television sets to watch a former president visiting the birth place of K.B. Hedgewar and the offices of a semi-secret organisation called the Rashtriya Swayamsevak Sangh.

Nearly all news channels ran a live telecast of not only Pranab Mukherjee addressing the swayamsevaks of the RSS but also the speech of Mohan Bhagwat, the sar sanghchalak, or supremo, of the RSS which came just before. A nondescript RSS function became a national event and the message of the sangh reached all corners of India thanks to our curiosity over what India’s former president was going to do there.

Picture perfect for the RSS. It got not only one, but many frames which it will showcase to future generations to prove that it is not shunned by the civilised: Pranab Mukherjee standing on the balcony of the birth place of Hedgewar, the founder of the RSS; Mukherjee garlanding his statue; Mukherjee’s remarks in the visiting book: “I came here to pay my respects to a great son of India.”

As Mukherjee was providing the RSS these photo-ops, I flipped through “Pathey”, a pocket-sized book full of the gems of Hedgewar Thought which swaymsevaks are supposed to carry around. The Telegraph has reproduced some of them for our benefit, to enlighten us about the greatness of the mind of this son of India:

“The Sangh wants to put in reality the words “Hindusthan of Hindus”. Hindusthan is a country of Hindus. Like other nations of other people (eg Germany of Germans), this is a nation of Hindu people.

Only a piece of land cannot be called ‘Nation’. A nation is created where people of one thought, one culture and one tradition live together since ancient times. Because of exactly the above reasons, ‘Hindusthan’ is the name given to our country and this is a country of the Hindus.

Expecting help from others and pleading for it is a clear sign of weakness. This clearly reflects in behavior. So, Sangh swayamsewaks should fearlessly proclaim, “Hindusthan of Hindus”. Remove all narrow-mindedness. We do not say that others should not live here. But they should be aware that they are living in Hindusthan of Hindus. (Like others would realise, if they were living there, that they are living in France of French people, or Germany of Germans, or Spain of Spanish people). Others cannot infringe on rights of Hindus here.

The same Hedgewar had called Muslims “Yavana snakes”, who should be seen with suspicion for their reluctance to pay homage to mother India.

Every word of his contradicts the idea of India that Gandhi, Nehru, Patel, Rajagopalachari, Azad and Sarojini Naidu shaped through their struggles, and he built the RSS to dismantle the edifice of secular India that Mukherjee eulogised in his speech.

If Hedgewar is great, then the very notion of greatness would need to be revised or upturned. Would any sensible German politician call an anti-Semitic ideologue a great son of Germany?

Apart from these, the picture of Mukherji himself standing at attention to watch the saffron flag go up and the parade of the lathi-wielding swayamsevaks would be taken around as trophies by the RSS.

The spokespersons of the RSS lost no time in telling the world that the speeches of Bhagwat and Mukherjee complimented each other. They did in many ways, even if the Congress party and the commentariat is applauding Mukherjee for his great, statesmanlike address. 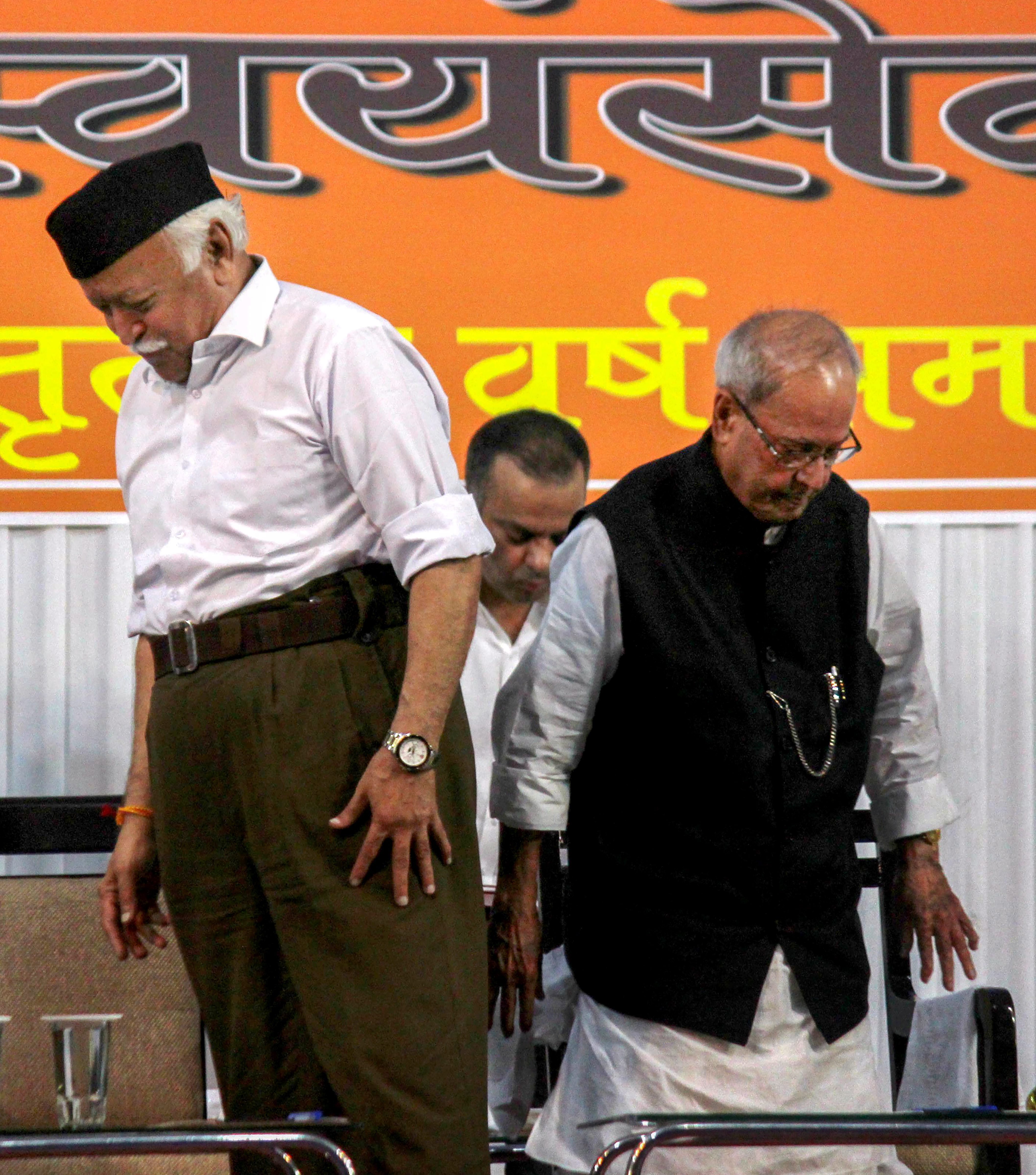 Bhagwat used the cover of unity in diversity to camouflage his real message that Hindus are specially responsible (uttardayi) for India. And Mukherjee, while dwelling at length about the great ancient period of India and its unbroken history of 5,000 years wrapped up the crucial medieval period in just two sentences. To tell an audience of swayamsevaks that “Muslim invaders” came and ruled India for 600 years, after which the East India Company captured India, is to endorse their wrong-headed, communal reading of history in which they speak of “800 years of foreign rule”.

What Mukherjee chose not to say

The whole event was high in symbolism. Mukherjee obliged the RSS by not embarrassing it by putting a mirror to the sangh. We may be pardoned for calling him Gandhian but his speech showed that he lacks the courage of Gandhi. Gandhi did not mince words when he told the leaders of the Sangh of his unhappiness at learning they were involved in anti-Muslim violence, or when he forced Golwalkar to say that the RSS did not believe in violence against minorities. Of course, Golwalkar, like a true sanghi, never meant it.

No one expected Pranab babu to be as forthright as Patel, who slammed Golwalkar for the obstinacy of the RSS and its refusal to mend its ideology of violence against the minorities. Mukherjee used diplomatese, but he was not honest. He said “violence” when he should have said murder and lynching. He said “at the heart of violence is darkness” when he should have said that at the core of violence is the anti-Muslim and anti-Christian hatred spread by the RSS and its affiliates. He should have talked about lumpen crowds taking over India and the goondaism that is being practised in the name of nationalism. Instead, Mukherjee gave a sanctimonious speech which – as a friend from Gujarat, Prasad Chako, rightly said – “would fit any audience anywhere, a speech which anyone could interpret in any manner”.

Mukherjee only flattered his hosts when he said that India was the fastest growing economy. He complained about India being very low on the happiness index. But he did not care to identify the unhappy lot or the sources of their unhappiness. Otherwise, he could have talked about the farmers who are dying and battling against a murderous economic regime, he could have talked about the youth which feels unwanted in this great land, he could have mentioned Dalits, who are being attacked everywhere, and of course Muslims and Christians who are at the target of the government and the RSS. He preferred not to do that. That could have struck a discordant note on a solemn occasion like this.

Since people love positivity, Mukherjee could have talked about the humanity that people like Yashpal Saxena of Delhi and Imam Rashidi of Asansol – who lost their sons to the communal frenzy that the RSS and its affiliates have unleashed on the people of this country. Or, the sadhus of Ayodhya who held an iftar for their Muslim neighbours in their temples, or the heroic strivings of the citizens of Gurgaon who are battling the demon of divisiveness by bringing Hindus closer to Muslims. He did not remember them. He could have. He decided not to.

By pitching himself above the divides which are tearing apart the lives of ordinary Indians, @CitiznMukherjee, as he calls himself on Twitter, shied away from the duties of a true citizen. Citizenship is cultivated by standing together with those who are being denied the rights attendant on citizenship.

What the ‘great son’s’ message really is

Bhagwat was right. Just when the nation was preparing for the passing out parade of the swayamsevaks at Nagpur, one of them, their senior, Basanagouda Patil Yatnal, a BJP MLA from Karnataka, was heard instructing corporators not to work for Muslims.

Yatnal is only following the “great son of India”, Hedgewar, and his maatri sanstha, the RSS. Before he is called fringe, let us remind ourselves that he has served as a minister in the government of the darling of Indian democrats, Atal Bihari Vajpayee, a proud swayamsevak.

Nice words fail to gloss over the viciousness of the mind that lurks behind them.