Speaking at Manish Sisodia's book release, the former president said AAP's efforts to improve the quality of education must be recognised. 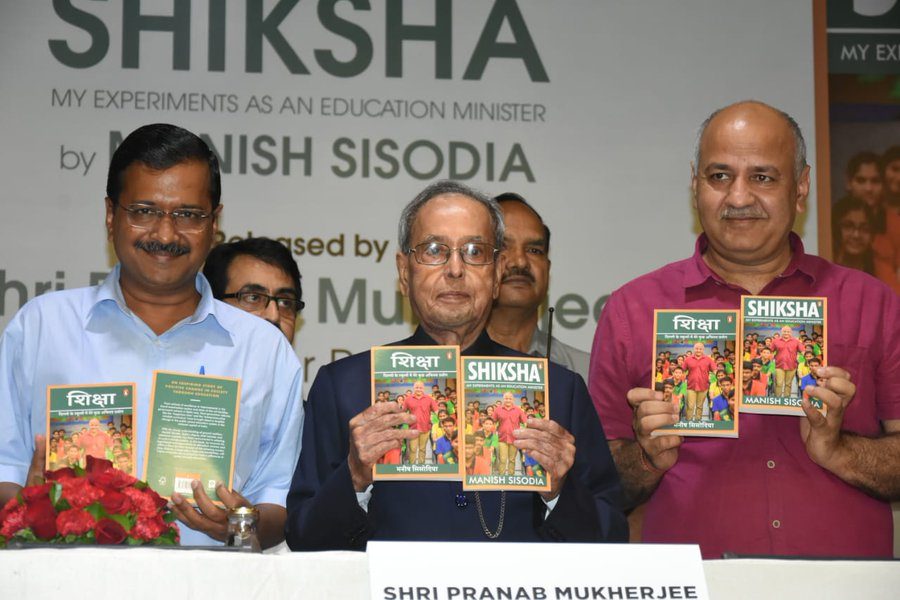 New Delhi: Former President Pranab Mukherjee on Thursday lauded the Aam Aadmi Party government in Delhi for its efforts to reform the education sector. He was speaking at the launch of a book by Delhi deputy chief minister and education minister Manish Sisodia.

The event was also attended by Delhi chief minister Arvind Kejriwal. The book, titled Shiksha: My Experiments as an Education Minister, has been released in both English and Hindi.

Though Mukherjee’s political life was entirely with the Congress, he heaped praise on the AAP government’s efforts to improve the quality of education. He also noted the “enormous pressure” under which the government works, especially since Delhi attracts a large number of students from across the country.

He said the work being put into the education sector in Delhi would thus also go into meeting the needs of the country.

‘Delhi has led in educational reforms’

Mukherjee, who was a professor in West Bengal before he entered politics, also lauded the work done by Sisodia and his team. He said Delhi was leading the way when it came to educational reforms. “I must congratulate them for doing so well,” he noted.

He also recalled that in 2015, Kejriwal and Sisodia invited him to teach, waking up the “teacher in him who was dormant till then”. Thereafter, for two years, he said, despite being president of India, he had taken classes on Constitution at a Delhi government school.

The former president said students should be encouraged to ask more questions. He also lauded the “happiness curriculum” which was launched in Delhi government schools in 2018, saying the world needs a “gross national happiness” index and that the foundation of happiness lies in education.

As for the book, which dives into the story of educational reforms in Delhi, Mukherjee said it also speaks about the education system and the challenges that were faced in the process. “The book narrates the practicalities of the changes that took place,” he added.

‘25% of budget allocated for education’

Kejriwal said his party’s focus was on education right from the time it took over the reins of the capital city. He said nearly 25% of the budget was allocated to the sector as the government wanted to “enable and empower students”.

The chief minister said for his government, the strategy of reforming the education sector was three-pronged. It involved improvement in infrastructure, proper training of teachers and revising of the curriculum, he said.

Sisodia said that the AAP government tried to improve the school system. “We wanted to end the difference between government and private schools. We did not want people to look down upon the government schools or to think of them as ones that exist only for the poor. And we made quality education and an enterprising approach our priority.”

He said over the years, the Delhi government’s work in the field of educational reforms has won widespread acclaim and set an example for the entire nation.