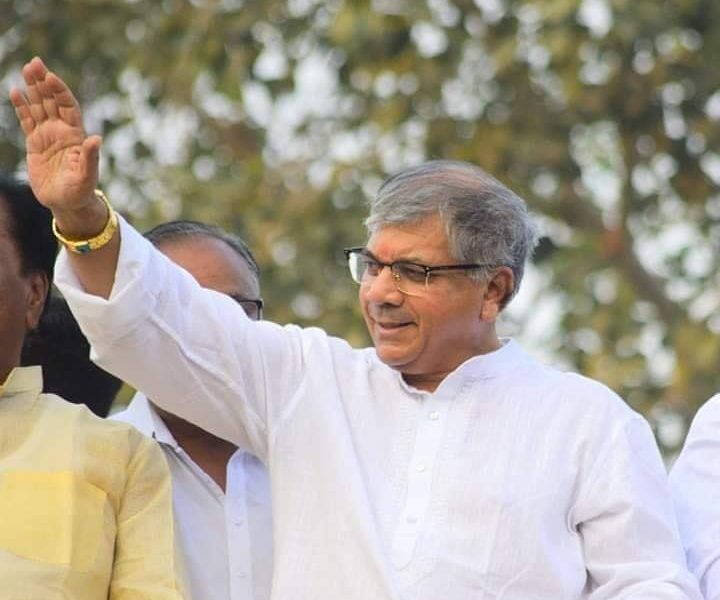 Mumbai: In March this year, senior political and anti-caste leader Prakash Ambedkar made an ambitious announcement. He said that his newly formed party, Vanchit Bahujan Aghadi (VBA), would field candidates on all 48 Lok Sabha seats in Maharashtra. The party – formed in the aftermath of the violence unleashed on the Dalit community visiting Pune’s Bhima Koregaon on January 1, 2018 – fielded most candidates belonging to Scheduled Castes, smaller backward castes and many from communities that have never been represented in the electoral political process.

At the end of this one-of-a-kind social experiment, the party managed an impressive 14% vote share or 41 lakh total votes. But this vote share did not convert into electoral success. Barring one candidate from then ally All India Majlis-e-Ittehad-ul-Muslimeen or AIMIM, who won with a thin margin from the Aurangabad constituency, VBA did not meet with any success.

Five months later, in October, the party once again contested on a whopping 242 seats in the state assembly elections. This time, the vote share had drastically come down from 41 lakh to 24 lakh votes, and not one seat was claimed.

The Congress has alleged that the VBA is a spoiler and, in both elections, split votes that would have gone to other secular, non-BJP parties. They also alleged that the VBA was merely acting as the BJP’s “B- team” in the state and was there to only to dent Congress’s chance of winning.

Soon after the results were announced on October 24, messages began circulating on several pro-Congress WhatsApp groups, with the list of seats where the Congress and Nationalist Congress Party came second and the VBA polled a sizeable share. These messages claimed that the VBA had eaten into Congress and NCP’s votes. Ambedkar vehemently denies these charges.

Congress’s state spokesperson Sachin Sawant openly criticised Prakash Ambedkar for the coalition’s defeat on as many as 25 seats. Sawant said that Ambedkar was responsible for depriving the state of a secular government.

Similar allegations were also made soon after the Lok Sabha elections. But the numbers had indicated that the Congress had lost on at least 20 out of 48 seats with one lakh or more vote margins, and the VBA barely had a role to play in those constituencies.

Challenging Sawant’s claims, Ambedkar says, “One needs to take a closer look at the VBA’s performance. In at least 9-10 seats, VBA is on number two and has lost the chance of winning the seats only because of the Congress and NCP.” In the Akot constituency in Akola, for instance, where BJP candidate Prakash Bharsakale won with 48,586 votes, VBA’s candidate advocate Santosh Rahate had polled 41,326 votes and the Congress candidate was way behind with a mere 27,679 votes.

Similarly, in Akola’s Murtizapur constituency, VBA lost by a mere 1,910 votes to BJP’s Harish Pimpale. VBA’s candidate Pratibha Awachar had polled 57,617 votes, Pimpale got 59,527 votes and Congress’s Ravikumar Rathi had polled 41,000 votes. “For a newly formed party, each of these seats were valuable. The Congress and NCP were fully aware that we have a strong presence in these regions but they had still contested. If not for them, we would have managed to win these seats,” Ambedkar says.

Yet, the VBA electoral performance in terms of seats won is less than inspiring. Looking back, Ambedkar says the party made a few “fatal mistakes”, along with several external factors led to this disastrous result.

“We are a community of zero or very little resources. Elections are an expensive affair. We were not able to raise the kind of resources that is essential to run for elections,” Ambedkar told The Wire.

In the general elections, the funds were primarily raised from the community itself. At the end of every public rally, party volunteers would go around seeking donations and several people had come forward to donate for the cause. “So many supporters had donated their monthly incomes, several women had even handed over their gold ornaments to raise funds. It was an emotional moment for the Bahujan community. They saw a political possibility in the state and they were ready to push limits for the cause,” says Aakshay Bansode, a young party activist from Nanded district.

But a few months later, the enthusiasm had faded. Ambedkar attributes that to the weaker economic capacity of the community. “It was too early for the community to be able to make any donation. Last time itself several people had given a huge chunk and were no more able to make similar kinds of donations. And as a result, we were not able to reach out to our voters in several areas. Our poor reachability led to our defeat,” he adds.

Coalition with the Congress not an option

It is not like Ambedkar or other party leaders were unaware of their limited financial capabilities. Why, then, did the party not agree to a coalition with the Congress?

Ambedkar says, “The moment results were out and it was clear that (Shiv) Sena was better positioned, both Congress and the NCP were eager to reach out to the Sena. Both the Congress and the saffron parties claim to have radically different ideologies. Still, the Congress was ready to form a coalition with the Sena. How does one even enter into any kind of political arrangement with such a party?”

Ambedkar further adds that the movement that he aspires for is not just to claim political power. “We need to come in power but that would be done only on the basis of our ideology,” he claims.

Both during the general elections and later during the state assembly polls, Ambedkar had a talk with the Congress over an alliance. While the Congress claims to be keen in forging an alliance, it had offered VBA fewer seats that it asked for. Both times, the talks failed.

Kapil Rajhans, a senior college faculty at Kolhapur University and a political commentator, points to a “historical” pattern and says that the Ambedkarite politics has never been allowed to flourish in the state. “Most political parties have lost their relevance the moment they joined hands with the BJP or the Congress. Jogendra Kawade, Ramdas Athawale and many other Ambedkarite leaders have gone with these established parties. What happened to them? How many legislatures have they managed?” Rajhans asks.

Buddhists vs other marginalised communities

Ambedkar’s counter to the Congress’s allegation might even have some substance in it, but he can’t shy away from the writing on the wall. In most constituencies that The Wire had travelled to during elections, ground-level party cadre complained about a lack of clarity among the leadership. In most constituencies, karyakartas claimed that the parliamentary committee of the party had nominated candidates who had no ground presence.

“Just by posturing on social media, elections are not won,” said one senior leader of Ambedkar’s erstwhile party, BHARIP Bahujan Mahasangh. Several experienced party workers had stayed away from the campaigning process as a mark of protest, he claimed.

There have also been protests and resignations following the ticket distribution. Like in Hatkanangale constituency in Kolhapur, the VBA decided to field a lesser-known candidate, S.P. Kamble, and that led to mass resignations. Indrajit Kamble, a senior leader and a longtime supporter of BHARIP, decided to quit the party after he was denied the ticket. In this constituency, even traditional Buddhist voters boycotted the candidate and as a result S.P. Kamble polled a meagre 11,000 votes in this assembly election.

Ambedkar’s decision to consciously keep Buddhist candidates away also cost the party dearly. “The community has always been more politically aware and supported the Ambedkarite movement. So this time, when VBA decided to go for candidates from other communities, the Ambedkarite Buddhist communities were miffed,” points out Somnath Waghmare, a PhD scholar at the Tata Institute of Social Sciences.

Unlike the Buddhist community, several OBC communities in the state are still more inclined towards the BJP and Sena. So even after the party decided to nominate candidates from these communities, it did not yield any results. Ambedkar, accepting this as one of the major failures, said, “There is a lot of work that needs to be done to overcome social barriers. There exists an acute sense of superiority among the OBC communities. They would attend VBA’s rallies but that did not convert into votes. A voter, in India, is willing to vote for a candidate above him in the caste ladder but not for someone below him. This has always the biggest challenge of an anti-caste political movement,” Ambedkar claims.

Attempt to criminalise the community

Along with the internal factors, Ambedkar says his party had to also fight the state’s clampdown on his party workers. Externment or tadipaar notices were issued to over 1,200 party workers in just Kolhapur district, and to several hundred across the state just two days before the elections.

“These notices were issued in relation with the Bhima Koregaon agitation last year. Even when chief minister Devendra Fadnavis had declared that he would be taking the cases back, he did not. Instead, he decided to victimise some important party workers just two days before the election. We were forced to stay away from the campaign,” said Dayasagar Kamble, one of the party workers from Nagaon who along with 30 others from his village was served with this notice.

It is easier to mobilise a community at the time of elections. After this defeat, several party workers have expressed their dismay towards the movement. To this, Ambedkar says, “Of course the community is feeling discouraged with the results, but one can’t forget that this is also perhaps the only community that fights back irrespective of the result.”

Going forward, Ambedkar says the focus will have to be on bringing in a social synergy among different Bahujan communities, especially between the OBC and Dalit groups. “Unless the social barrier is erased, it will be difficult to fight a successful electoral battle,” he adds.