Vishnu Pandya, who is currently the president of the Gujarat Sahitya Akademi, said that “Godse was a patriot, and so was Gandhi” and that Thakur's statement must be seen “within a context.”

A little over a week after Prime Minister Narendra Modi criticised the BJP candidate from Bhopal, Pragya Thakur for calling Nathuram Godse a patriot, saying he would never be able to forgive her, a top Sangh parivar ideologue – known to be close to Modi in Gujarat – has supported her, saying her statement should be seen “within a context.”

Participating in a debate on GSTV (starting at 11 minutes), Vishnu Pandya, who is currently the president of the Gujarat Sahitya Akademi and is known to be an incisive Sangh historian, said that “Godse was a patriot, and so was Gandhi”. He was answering a query from another participant in the debate, Rajesh Thaker, a keen Gujarati analyst, who regretted that the likes of Pragya Thakur had won, even though they considered Godse a patriot.

Taking strong exception to Thaker, Pandya, a Padma Shri awardee, said that one should understand why Thakur won. “I think she should have won, and she has won. All right, she is on bail, and so is Sonia Gandhi… But basically things reached such a point where a lady, who had cancer, was badly abused… Isn’t that a human rights issue?”

Also read: Modi ‘Won’t Forgive’ Pragya for Godse Comment – But Has Been More Lenient With Others

Justifying Thakur’s candidature, Pandya added, she was rightly asked to contest, as “all around there was talk of saffron terror, Hindu terror… Hindus cannot be terrorists, they are by nature tolerant.”

Calling her an “ordinary woman, a saint, who would be reciting bhajans”, Pandya said that nobody is talking about the type of choicest abuses hurled at her. “As for her remark that Godse was a patriot, I dare say he was, and so was Gandhi. Only their ways were different. There is a need to look at things in a context,” he said on the live debate. 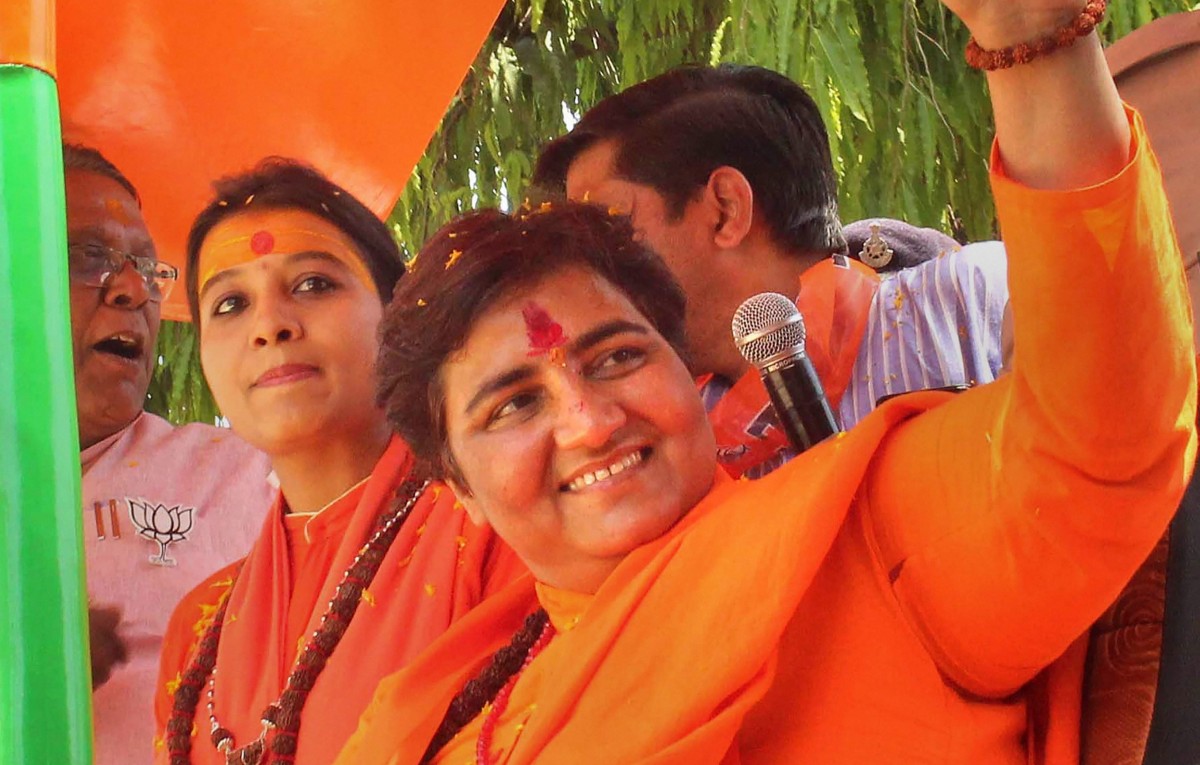 Referring to the “context” – though without offering any sources – Pandya said, “If Godse killed Gandhi, then in the name of Gandhi, in Maharashtra, 8,000 people, too, were also killed”. Pandya wondered why nobody talks about this. One of the victims, added Pandya, was Pandit Satavalekar – who was forced to migrate to Gujarat from Nasik as “his library was burned down… Hence, If you want to see events (about the murder of Gandhi) you must look at them in totality.”

Sharply criticising Pandya for his “Godse is a patriot” remark, Thaker commented in a Facebook post that the “well-known” political analyst’s view was shocking, and it became finally clear that the recent Modi victory suggested, “it is not opposition but also Gandhi who has been defeated.”

Calling Pandya one of the “beneficiaries” of being part of the Sangh parivar, Thaker added that Pandya made the remark knowing fully well that Modi would not take back the Padma Shri awarded to him for his “Godse was patriot” remark.

Uttambhai Parmar, a Gandhian activist from south Gujarat who heads the Kim Education Society, commented that what is particularly significant is that “the comment on Godse – who killed the Father of the Nation, the man who brought freedom to India – comes from a person who happens to be heading the Gujarat Sahitya Akademi.”

Known for his closeness to Modi, post-2002 Gujarat riots, Pandya was instrumental in providing major inputs on how and what to highlight in Indian history in order to show the BJP in a good light. One of the inputs was on Gujarat militant nationalist Shyamji Krishna Varma, a freedom fighter who spent his last days in Europe. Pandya wrote a volume on Varma, following which, in 2003, Modi made a major spectacle out of Varma’s “contributions”, bringing his ashes from Geneva, criticising the Congress for forgetting “revolutionaries” like him.

Interestingly, Pandya, who once edited an RSS mouthpiece Sadhana, was praised in 2014, among others, by a People’s Union of Civil Liberties (Gujarat) book for his “fearless” journalism. More recently felicitated by the Gujarat Media Club during an annual meet for his “contributions”, this is not the first time that he has insisted on the need to look at Godse “within a context.”

In a Facebook comment in 2017, Pandya praised what he called a “thought-provoking and really informative article by Kavita Kavi”, congratulating her for saying that there are a large number of facts about Godse’s act of killing Gandhi which people are not aware of, ones they should be told – things like why Godse shot only Gandhi and not the two women who had accompanied him on that fateful day.