Pragya Thakur Aside, Why Digvijaya Could Have Never Won the Seminal Seat of Bhopal

Digvijaya Singh's baba-sadhu show impressed nobody; the other party had the copyright over it. 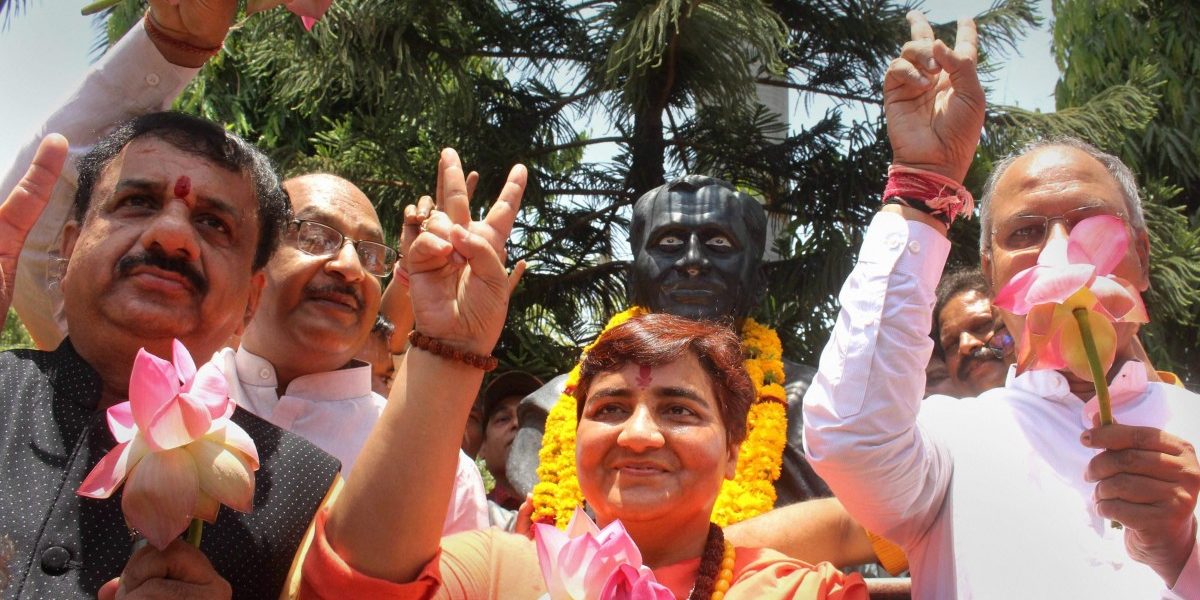 While reporting from Bhopal earlier this month, The Wire had surmised:

“If Digvijaya [Singh] loses it will only be because despite his best efforts, he could not fill this great chasm that divides the city, that has helped the BJP hold on to it for nearly 30 years.”

In the end, it would appear this was true of the entire nation. The gulf is so wide, the poison so deep that no bridge was enough. It required only the waving hollow effigies amidst ancient incantations of security against an illusory enemy for everyone to forget everything.

Modi-Shah threw in Pragya Singh Thakur in the mix with instructions to the faithful that “she was the satyagraha against the humiliation of Hindutva”.

She continued this path of ‘satyagraha’ with stories of her torture for holding up the bhagwa flag, her curses and her deification of Nathuram Godse.

In 1992, Bhopal had been ravaged by riots in the aftermath of the Babri demolition. For three days, lawlessness prevailed and Hindus reportedly took the brunt of it. Stories of Muslim mobs in the city are still told with horror.

Also read: The Inevitable Saffronisation of the Bhopal Elections Is in Full Swing

Pragya calculatedly touched that raw nerve: “I am proud of the Babri demolition and was on the dome that day”.

The election was in Bhopal, but the message reverberated all across the country.

In the end, the Congress went down like a sand castle. Nine of its former chief ministers lost – Digvijaya one among them.

Digvijaya had done some ground work before he jumped into the fray in Bhopal. After all, this was going to be his first direct election in 15 years since he lost the state in 2003 to another sadhvi – Uma Bharti.

The Congress government had returned to power int the state, and his friend and benefactor Kamal Nath was chief minister. Digvijaya had calculated well: there are 3.5 lakh Muslim voters, 2 lakh Brahmins, 1.25 lakh Rajputs, 3 lakh Kayastha. In a 20-lakh vote constituency, Bhopal had never polled more than 61% (1999) and if that held, he would require about 7 lakh votes out of a possible 13 lakh polled to go through.

In the end, he lost by 3.64 lakh votes. Ghosts can be more powerful than electoral math.

No one had wanted to take on Digvijaya to begin with. Shivraj Singh Chouhan didn’t take on the fight, Uma Bharti demurred and none of the Kayastha candidates were ready, including sitting MP Alok Sanjar. Pragya’s name was given the go-ahead at the last possible moment from the saffron camp.

If she lost, she would be dispensable history. If she won, she would make history – not for herself but for the party.

Digvijaya nevertheless underrated the extent of the anger against him amongst the sarkari crowd in the state capital. His Dalit agenda, and his indiscriminate induction and firing from government posts in 2002-03 had created a psychosis amongst civil servants that has not washed away. He depended on rural voters who in turn felt duped by the state government as karza maafihas not happened. He depended on BJP friends – Sarangs, Babulal Gaur, Alok Sharma etc to return past favours. They were too afraid of Shah’s disciplinary cane to step out of line openly.

Digvijaya continued to make mistakes once Pragya entered the fray. He went about proving his Hindu credentials by organising sadhu roadshows and yagnas. He painted the town more saffron than BJP itself. The messaging was garbled. 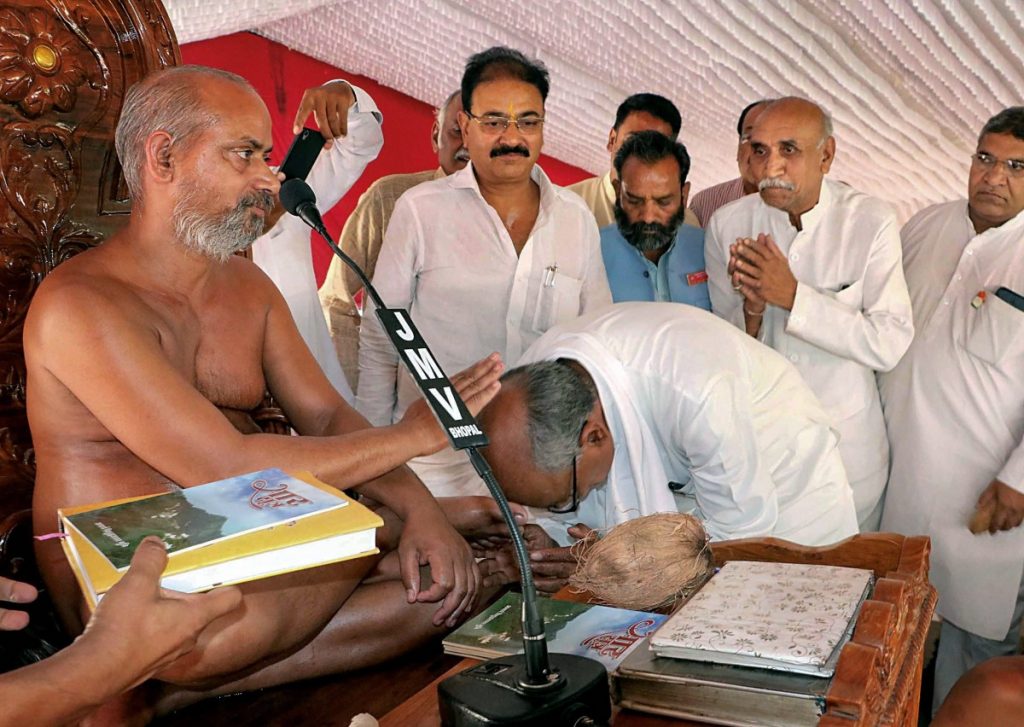 In contrast, as soon as the topis showed up, he lost more votes. The message was cleverly broadcast by the BJP was that the topis had captured the PCC and government. His guest list included Javed Akhtar, who unfortunately has very little respect even amongst the Muslims in Bhopal. Kanhaiya Kumar and Hardik Patel appeared by his side, hardening the resolve of the faithful against the pseudo-secular.

Digvijaya tried an alternate strategy. His minders told him he would shine as the educated engineer messiah of development, being challenged by an uncouth outsider. Large hoardings went up in all corners of the city proclaiming his plans for Bhopal. His publicity minders included his wife, Amrita Singh, and her young team of laptop-wielding, half-baked political publicity scientists who were too young to know or be aware, that in this very town, 15 years ago, Digvijaya was known as ‘Mr Bantadhar’ – an apostle of anti-development.

Throughout his campaign, Digvijaya was surrounded by all his cabinet members from the ’90s, new ones from the Kamal Nath stable, and the chief minister of Chhattisgarh, Bhupesh Baghel. Thousands more showed up, but all of them told each other that the Raja was winning and relaxed.

In 15 years, the scenario has changed in Bhopal. It is another city with newer mobs. Digvijaya needed new campaigners with a grip on the ground. The old ones pushed away the new ones who tried to reach him, alienating those who were genuinely invested.

Since the swearing-in of Kamal Nath, everyone around Digvijaya has been treating him like the real chief minister. He himself has been playing all the old forgotten films: the same old faces of dyed-up netas, civil servants and journalists mill around him.

“Raja Talkies mein phillum nahi badli hai” was the message that got around in chaste Bhopali – and that was that.

The only strategy that would have worked was attacking Shivraj and his 13-year government savagely for the corruption under their watch – the many Dumper, recruitment, Vyapam and e-tender scams.

If he had fought on the streets with the thousands who lost their jobs, medical seats and lives under Shivraj; for the many thousand farmers around Bhopal whose land has been captured by MNCs for wheat and Basmati farming – that may have worked.

But he didn’t say a word about them.

His friendly attitude towards BJP leaders alienated his followers, who have toiled for 15 years with no rewards. The baba-sadhu show impressed nobody; the other party had the copyright over it.

He needed to repeat what he had done in ‘90s, as an energetic PCC president, to overthrow the Patwa government, but he is now 72 and more interested in his son’s career.

He should have steered clear of the election – the Narmada Yatra was enough proof. He could have left Bhopal to a younger, bolder and committed fighter capable of leaving a mark even with a loss.

Instead, now, the nation must contend with terror-accused Pragya Thakur as a member of parliament.