The Shades of Populism in Narendra Modi's Politics of Infrastructure

State infrastructure and the rhetorical politics around it are often invoked by leaders to ‘inspire’ public sentiments, ‘strengthen’ nations and create sentiments of ‘pride, nostalgia, patriotism'.

It was famously said of Italian dictator Benito Mussolini that, at least while “he was dragging his country into a war in which over a half a million of his citizens died, he was also making sure the trains ran on time”.

Shockingly, when facts were accounted for later, it turned out, Mussolini did very little to either make the trains run on time, or to improve the state of transportation infrastructure in Italy during his regime. It was all, as we call it today, ‘fake news’ created during wartime for a popular ‘narrative control’ exercise, where Mussolini used transport – one of the key areas of state infrastructure – as an easy way to connect with voters (especially during a time of crisis).

There is something that Mussolini and Modi may both have in common – the quest to use ‘state infrastructure’ for pursuing a politics built around the pursuit of fulfilling narcissistic forms of self-love (to justify a war in one case and a vanity project in another) and to use as a popular instrument of ‘narrative control’.

Prime Minister Narendra Modi’s own obsession to have $2.72 billion of Indian taxpayer money spent on a ‘Central Vista Project’ in New Delhi – work on which has been deemed an ‘essential service’ – has drawn much flak, especially at a time when the country is gasping for survival from a deadly second wave of the pandemic.

Much of the shared criticism to the project has attacked both, the misguided fiscal priorities of the Union government – during a pandemic when all necessary resources need to be channeled towards a crumbling medical system – and the bizarre political motivations behind the Prime Minister’s (narcissistic) pursuit to continue work on such an extravagant state infrastructure project. 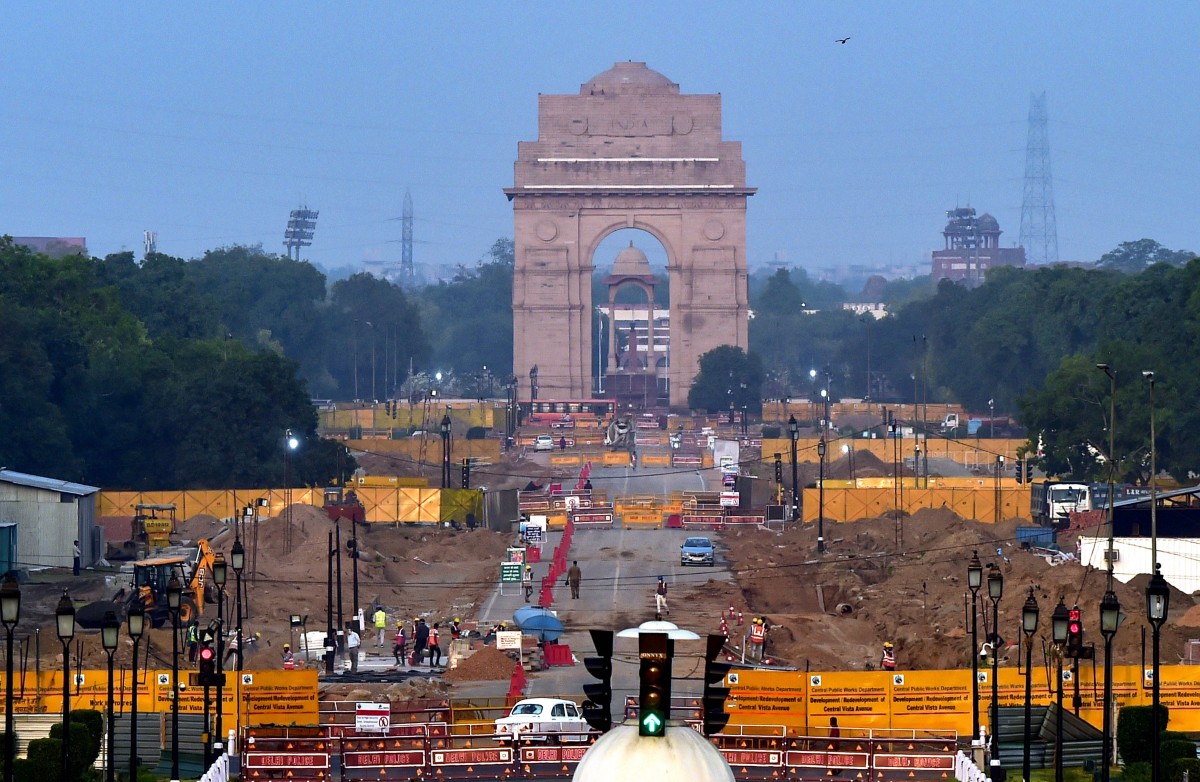 However, another interesting question arises: How does the politics of state infrastructure play into the growing authoritarian, populist personalities of leaders and their state regimes?

Populism in politics employs many rhetorical tools to ‘inspire’ public sentiments, ‘strengthen’ nations, and impact the very way an individual looks and perceives ‘the nation-state’ itself. State infrastructure as well, and the rhetorical politics around it, is often invoked by leaders to create collective-positivist sentiments of ‘pride, nostalgia, patriotism’.

A given piece of state infrastructure, for an authoritarian political figure, may become one of the most visible examples of projecting new (re)imagined ‘prosperity for a nation, its history and its people’, and may hold the power – in the politics of narrative control – to perceivably unite people in ‘pride and awe’ despite all costs and fiscal misspending it may otherwise accrue.

This isn’t just true in the context of the Modi government’s own preoccupation with the Central Vista Project in India. There are many cross-country parallels to look at. Trump’s infrastructural politics and campaign promise on tackling the American crisis of immigration by building a big ‘Border Wall’ at the US-Mexico border and making Mexico pay for it was key to his electoral victory.

Boris Johnson, in the UK as well, is seen as someone who often comes up with a proposed ‘massive infrastructure project’ as a thin-veiled effort to grab headlines and deflect from any helpful debate. His stint as London mayor was dominated by such ill-conceived infrastructure projects. The new Routemaster buses and the Emirates Cable Car were a big waste of money. Aborted suggestions include the Garden Bridge Project, which managed to waste another £46m in public money without even being built, and the Thames Estuary Airport.

As a more historical case in point, Juscelino Kubitschek, the 21st president of Brazil, inherited his predecessor Getúlio Vargas’s economic ambitions which he established in the “Fifty Years in Five” plan. This plan aimed to fast-track fifty years’ worth of modernisation and industrialisation in five years. At the core of this plan was the construction of a new capital, Brasilia. The project was inspired by the 1891 Draft Constitution’s call for a new Capital. No Photography signboard put at the construction site of Central Vista Project, in New Delhi, Wednesday, May 12, 2021. Photo: PTI/Manvender Vashist

The Brasilia plan was criticised for being ‘overambitious’ and a ‘fiscal misspend’ as the Kubitschek government was seen to be indulging in an unnecessary public expenditure at a time when the Brazilian economy was plagued with high unemployment and a highly inflated, deficit-ridden macro-fiscal position.

Unfettered by public criticism, the construction of Brasilia began in 1956 and the city was inaugurated in 1960 (even though some buildings were incomplete). Soon after this, Kubitschek was succeeded by two Presidents later – each of whose tenures were cut short until finally in 1964 a coup ushered in 21 years of military rule in Brazil. The construction of a new city for narcissistic pursuits of a single leader-despite all criticism, exacerbated the process of democratic-backsliding in Brazil (which led to a long period of military dictatorship thereafter).

Also read: On Display in Delhi Now, a Central Vista to Criminal Negligence

India’s own democratic backslide as seen under Modi now may explain a similar sentiment of narcissism, self-love and public apathy in the politics of infrastructure observed around the Central Vista project now.

There continues to be a serious democratic deficit in the manner in which this project is being executed and illegalities continue to veil it. As argued by Kanchi Kohli and Manju Menon in a recent column:

“The (Central Vista Project) has gained significantly from a weak regulatory framework that allowed urban construction projects lesser environmental scrutiny and highly constrained public participation. The project proponents have also been allowed to slice the project into several parts, most of which will never be assessed for their environmental viability. All the digging, barricading and building over Rajpath as the Central Vista avenue is underway without environment clearance. As stand-alone projects the construction of the new parliament building and the underground metro have also escaped environmental impact assessments”. 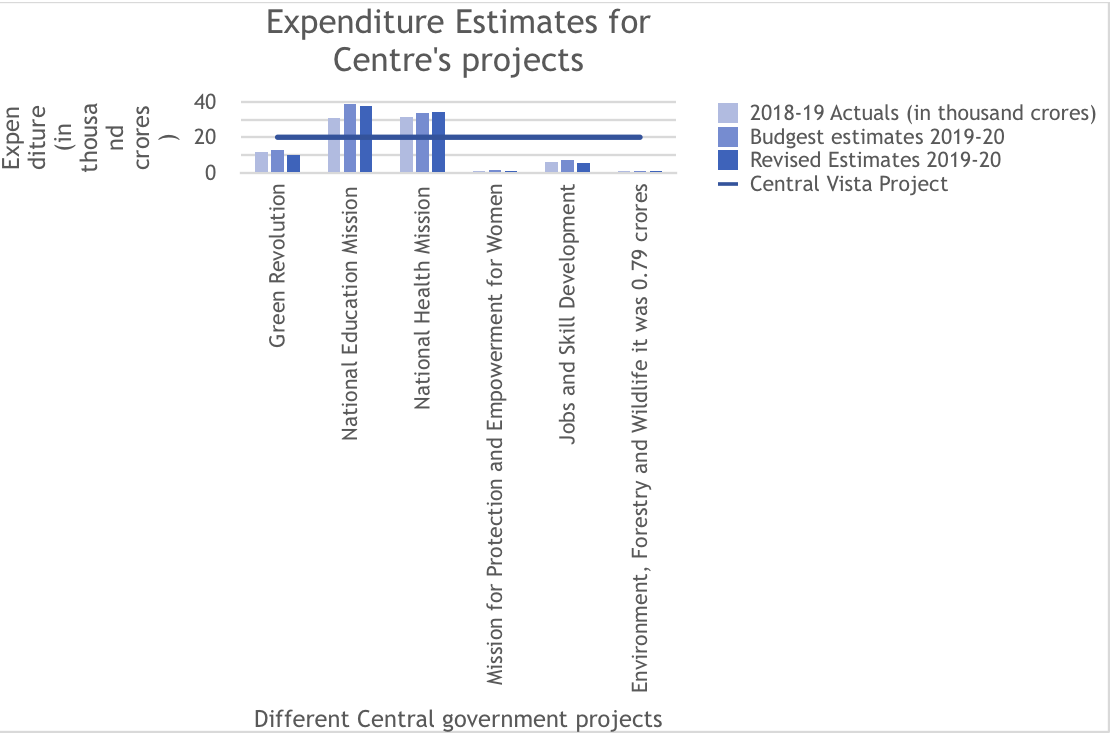 At a time when the Indian government’s aggregate public expenditure in various social and welfare schemes – from education, healthcare to social protection measures like MGNREGA – has all seen a decline in year-to-year spending, one can only wonder why taxpayer money can’t be put to better use. What’s worse to see is how the Central Vista Project wasn’t an exceptional outlier in the Modi government’s ‘wasteful’ spending list.

Also read: ‘Lest We Forget’: Why India Must Remember Its Present Horror

Similar to the Vista Project, spending on the Statue of Unity was also done as part of a vanity project for Narendra Modi in Gujarat. The idea around its creation was sold to the people along with the rhetoric of ‘national pride’ and of a hope to have ‘the tallest statue in the world’ to be the cynosure of all tourist attention over time, which can help compensate for the fiscal cost of spending USD 370 million on the project. The statue inaugurated in 2018 failed miserably to live up to its hype and gauging the social and environmental impact of its creation has been ignored and forgotten in public memory.

In public consciousness, a collective demand for knowing the Truth, ensuring greater Transparency and Accountability from an elected leader and a government, are the key operative principles on which effective governance is shaped in a democratic republic. They are the only ways in which any ‘wasteful’ politics of state infrastructure can be saved from becoming a personal, patrimony and egoistical pursuit of a leader. It is about time collective efforts to do so are made central to the actions of non-state actors, civil society groups, and the citizenry against the government, for a better (more accountable) macro-fiscal propriety and for a nation’s own wellbeing.