The way some politicians made a string of visits to the murdered boy's family helped in giving a communal undertone to the crime, which prima facie looks like a result of family outrage. 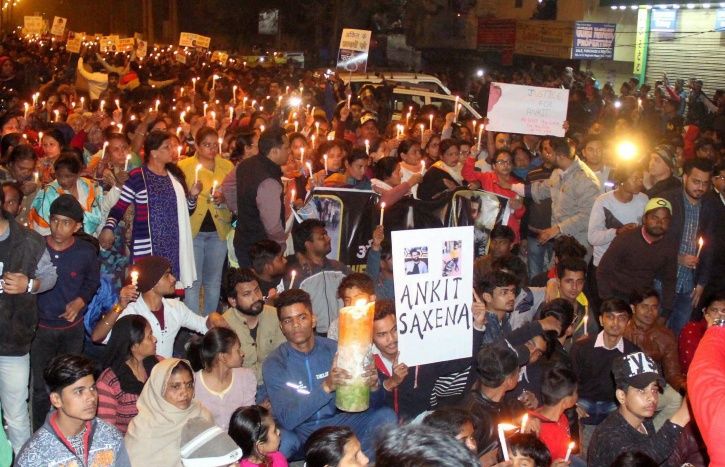 The way some politicians made a string of visits to the murdered boy’s family helped in giving a communal undertone to the crime, which prima facie looks like the result of family outrage.

A candlelight march in the area after the murder of Ankit Saxena. Credit: PTI

The gruesome murder of Delhi photographer Ankit Saxena, 23, at the hands of Akbar Ali, the father of the girl he was in a relationship with, prima facie seems a consequence of family outrage. But was is more outrageous is that way in which some Delhi’s politicians have tried to give the crime a communal colour. This is despite Saxena’s father appealing to all political parties to desist from communalising the incident.

After the murder played out in full public view on the streets of Khyala in West Delhi on February 2, several Delhi politicians visited the residence of the victim. Though some of them proclaimed that the incident should not be given a communal colour, the fact that they decided to rush to the victim’s house only because the perpetrators of the crime belonged to the minority community has already lent a communal tone to the murder. After all, murders are committed almost everyday and never do politicians make a beeline to visit the victims.

Among the first to comment on the issue was the area BJP-Akali MLA Manjinder Singh Sirsa on the day of the killing.

I don’t wish to show people the ghory murder… but ugly truth is out- 23 year old Ankit has been killed in the name of honour in our own Delhi by so-called ‘minority & oppressed’ religion.
The girl Ankit was in love with,Shehzaadi has admitted that her family killed Ankit. pic.twitter.com/hDbvv5a2lM

A day later, Delhi BJP president Manoj Tiwari tweeted. “Shocked and horrified at cold-blooded murder of Ankit Saxena. Culprits should be punished with the highest quantum.” This prompted the Deputy Commissioner of Police (West District) to comment that all the accused have been arrested.

Thereafter, Tiwari visited the family on February 4 and termed it an ‘honour killing’ and questioned the “silence” of chief minister Arvind Kejriwal on the issue, indicating that the CM was not concerned when crimes were committed against members of the majority community. He also demanded Rs 1 crore as compensation for the victim’s family.

This was immediately followed by Aam Aadmi Party (AAP) spokesperson Saurabh Bharadwaj’s statement that “even though it was an honour killing, they (BJP leaders) are trying to make this into a Hindu versus Muslim issue.” By now the atmosphere had got completely charged as  Bajrang Dal activists began visiting the area and started threatening the residents. Kejriwal and senior AAP leaders like Sanjay Singh subsequently also visited the family of the victim.

However, the string of visits by these politicians rather than applying balm to the shattered family,  only ended up stoking emotions and tension. In fact, victim’s father, on learning how the murder had caused tension in the entire area, appealed to the people to not communalise the issue.

‘Where was the need for politicians to visit the victim’s family?’

He said these political groups were only trying to make political capital out of the incident as bye-elections to some Assembly constituencies may be round the corner. Maken also questioned the need for installing Tipu Sultan’s portrait in the Delhi Assembly.

Maken said the way in which a communal colour was given to the murder “was a ploy by the BJP”, adding that “AAP fell into it.” The senior Congress leader said both the leading parties “were only trying to highlight an incident by pointing to its communal undertone. Politicians should always avoid such visits… It is not only about Manoj Tiwari, even others like Kejriwal and Sanjay Singh should not have gone there,” adding that “Do they go to other families of crime victims the same way?”

Meanwhile, Delhi Commission for Women chairperson Swati Maliwal  told The Wire that her organisation was trying to locate the girl and was making efforts to rehabilitate her. She said she had issued a notice to the Delhi Police on Sunday to know what kind of security was being provided to the girl. “It is a very sensitive matter and we are deeply concerned about her security and want to know if officers have been put on her security and if so, how many.” The girl has been kept in a secure area where even the SHO has little access to her.

Commending the maturity shown by Ankit Saxena’s parents. Maliwal said while compensation for the victim’s family was important, the girl’s rehabilitation was equally necessary. “She has lost just about everyone in this incident. She needs our support right now. I will ensure that she gets proper security. There is also a scheme of the government for witness protection and we would try and get her aid from the Delhi State Legal Services Authority, which has immense power and budget for it.”

‘Family wanted her to marry a more economically sound person’

The girl in question, Shehzadi, is probably the worst sufferer in the entire incident. She knew the boy since childhood as their families stayed in close vicinity in Khyala. Her father was a meat shop owner but later started working as a driver. Her mother ran a beauty parlour. The family shifted out of Khyala and moved to a rented accommodation in Raghubir Nagar about three years ago after their old home got too small for the family.

While it was Shehzadi who told the police about her family’s opposition to her friendship with Ankit Saxena, she had also indicated that this had less to do with their belonging to different communities and more with her father’s belief that she should marry someone who was financially better off. The boy’s father had an electronics shop but had been unwell of late which is why he wanted his son to look after his shop.

Amid all this, the media’s role is also in question. A section of the media has reported that when one of Shehzadi’s maternal cousins had married a Hindu boy a few years ago, there was tension in the family and the girl was never accepted by her mother. However, while this aspect is being alluded to indicate that Akbar Ali’s family was somewhat orthodox, what has largely gone under-reported is that his neighbours saw him as an affable person who often greeted them with a “namaste”.

On the day of the murder, Ali is learnt to have got annoyed when he came to know that Shehzadi was still in touch with Ankit and was planning to settle down with him. The girl is said to have fled to Tagore Garden metro station where she was waiting for him.

However, in the belief that she was being lured away by Ankit, the family members immediately rushed to his house and confronted him. While Shehzadi’s mother is learnt to have first rammed her scooter against Ankit’s car, the others, including her minor son, brother and Ali attacked him. As Ankit’s mother came to his rescue, she too was assaulted. Finally, Ali, who is accused of having carried a knife with him, is alleged to have slashed the boy’s throat. Throughout the attack, the family members of Shehzadi reportedly kept accusing Ankit of kidnapping their daughter. No communal slurs were passed.