How Political Patronage Has Kept the Sanatan Sanstha Afloat in Goa

Starting out as just a fringe irritant, the shadowy organisation has been emboldened by the Goa government’s support The headquarters of the Sanatan Sanstha in Ponda. Credit: Sneha Vakharia

Panaji: With the needle of forensic findings now pointing to a clear link between the killers of journalist Gauri Lankesh, Kannada scholar M.M. Kalburgi and communist leader Govind Pansare of Kolhapur, the spotlight is once again on the shadowy Goa-based Sanatan Sanstha.

Almost two decades after the hardline Hindutva organisation parked itself in Goa – it was registered by a trust deed in the state in March 1999 (a copy of the deed is with The Wire) – very little is known of what goes on inside the Sanatan Sanstha’s ‘ashram’ in Ramnathi, Ponda, or who actually calls the shots there, as its reclusive founder, Jayant Balaji Athavale, a Mumbai based hypnotherapist who turned 75 this year, stopped making public appearances at the ashram since 2004.

It isn’t clear if it was Athavale’s wife’s Goa links, or the fact that he received a warm embrace from saffron-leaning politicians in Goa, that prompted the shift of the Sanatan headquarters from Panvel in Maharashtra, to Ponda in Goa.

But Ramnathi, in Bandora village, Ponda taluka, would have seemed the natural choice. As home to a cluster of some of the biggest and best known temples in Goa, Ponda is both a religious and cultural hub.

The taluka is also the political base of the controversial Maharashtrawadi Gomantak Party (MGP) politicians Sudin and Deepak Dhavlikar, who are the Sanatan’s biggest benefactors and supporters in Goa. Both the Dhavlikar brothers’ wives, Jyoti and Lata, are sadhaks at the Sanatan, something they propagate quite openly. The Dhavlikars have said their wives are Sanatan members to “help promote our Hindu dharma and culture”.

Lata Dhavlikar, whose husband was a minister in the Goa government till he lost the election earlier this year, waded into a controversy two years ago when she publicly asked parents to stop sending their children to convent schools, and pronounced rape was on the rise in the country because Indian women were becoming more and more westernised.

A politician with the ability to cling to power even though the MGP has not won more than three seats in each of the last four elections in Goa, Sudin Dhavlikar is currently a minister in the BJP-led coalition government and holds the lucrative portfolios of PWD and transport, among others.

Why did they support an organisation suspected in the killings of three rationalists, I asked Deepak Dhavlikar before the election in February this year. He was enraged by the question. “Why are you studying this so deeply? If some members are involved, does it mean all Hindus are guilty?” was his reply, before he slammed the phone down.

But shouldn’t the presence of two Goa ministers – both Dhavlikar brothers and their families attended prayer functions in the Sanatan ashram last year – in the premises of an organisation linked to the murders of at least three people who were outspoken in their criticism of intolerance in the country, raise questions in Goa?

The Sanatan’s move to Goa and its furtive functioning was viewed with both suspicion and open hostility in Bandora village, long before its violent intent came out into the open in the Margao bomb blast that killed two of its sadhaks, Malgonda Patil and Yogesh Naik in October 2009. There were complaints and cross-complaints in local police stations, and the right-wing group even moved the courts in 2004, claiming it was being defamed by some locals. The defamation case was dismissed by the high court in 2007.

But it was in 2012, after the BJP won a majority on its own in Goa in the election that year – propelling Manohar Parrikar to the chief minister’s post again –  that the Sanatan Sanstha and its offshoot, the Hindu Janajagruti Samiti (HJS), became all the more publicly and visually assertive. The Sanatan and HJS went into overdrive to put together the first All Indian Hindu Convention “for establishment of Hindu Rashtra”. The convention took place at Ramnathi in June of that year, and the right-wing organisation crowed that not for 125 years had such a large gathering of pro-Hindu groups taken place.

The second Akhil Bharatiya Hindu Adhiveshan in June 2013 saw Narendra Modi, who was then still Gujarat’s chief minister, sending a message of greetings to the organisers. The event is still held every year. In March 2017, a reporter reported about the convention for The Wire. 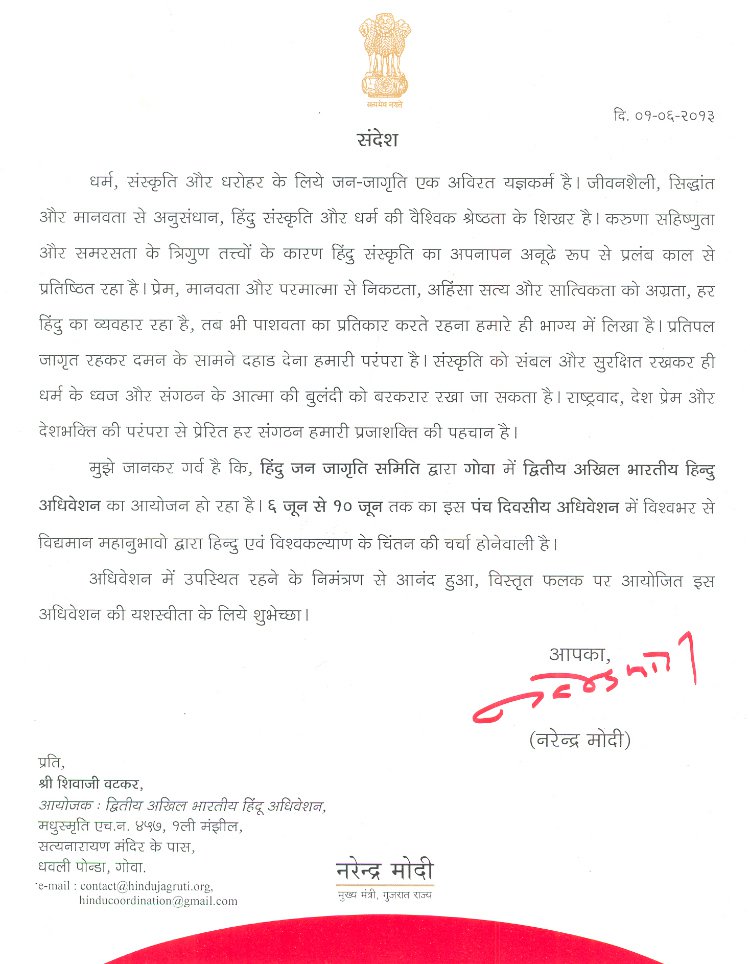 Narendra Modi’s message to the Second All India Hindu Convention, 29013.

How much financial and other backing is being ploughed by politicians and other below-the-radar admirers of the Hindu right into this convention we’ll never know. But what started as a dismissible gathering of the loony fringe that no one in the media paid much attention to is now offering a platform to the most obscure and the most hardline saffron elements to test the fine balance of tolerance in the state and the country. As it did, when the young Sadhvi Saraswati used this year’s convention in June – the fifth in a row – to say that “those who eat beef should be hanged in public”.

Though widely reported in the national media, Parrikar saw no reason to condemn the provocative statement. Nor has the BJP ever criticised the Sanatan or its foot soldiers, the HJS. Yet earlier this month, the party vehemently attacked the Goa Church, calling it communal for daring to use an article that drew a parallel between Nazi Germany and Modi’s rule. The article that appeared in the Church’s pastoral bulletin Renovacao before the by-election to the Panaji seat which Parrikar was contesting, cautioned voters to look beyond the narrow prism of state politics to the growing traits of fascism in the country.  The Church’s decision to set up its own fact-finding team to look into the recent desecrations of cemeteries here also angered the BJP.

The fact that the Sanatan enjoys political patronage in Goa has helped it weave its way into virtual social acceptability. Despite strong objections by many of journalists in the state, Sanatan Prabhat, the hardline Hindu rashtra proponent’s mouthpiece has been given accreditation by the Goa government. The paper has been associated with threats and warnings to writers and activists. As documents in the monsoon session of the state assembly showed, Sanatan Prabhat also gets government advertising support. Indeed, Sudin Dhavalikar told the Times of India in 2015, “We support Sanatan Sanstha through government advertisements.”

Though the BJP and its parent body, the RSS, may pretend to have nothing to do with the Sanatan, its backhand support and silence provides more than ample endorsement.