Despite a high court order, the local police station refused to file an FIR. The case has now been transferred to a different station. 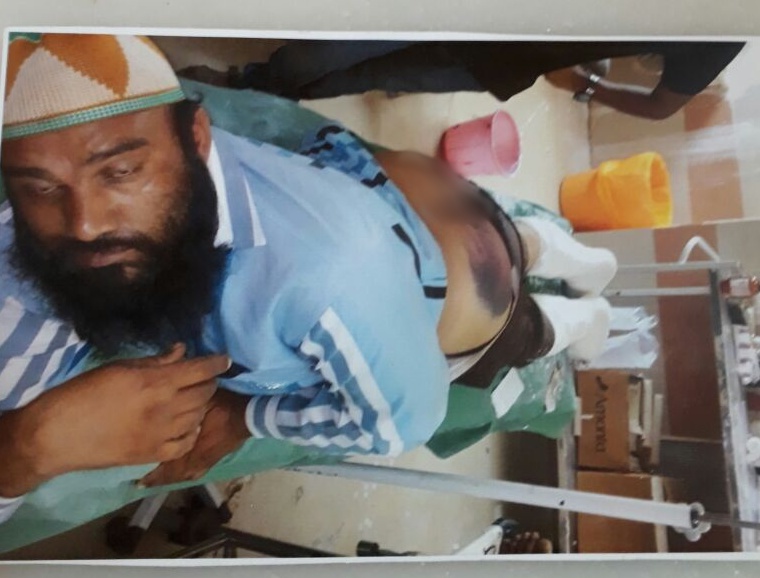 Ahmedabad: Shabbirhussein Gulamnabi Qureshi, a resident of the Khanpur area, is one of close to 8,000 meat traders based in Ahmedabad. The business has been the prime source of livelihood for the Qureshi community for generations. Qureshi is a distributor who, like many others, buys his stocks from the Ahmedabad Municipal Corporation-approved wholesale meat market at Mirzapur.

On the morning of May 21 last year, Qureshi, like on any other day, set off to deliver 120 kg of meat to his buyers Rajubhai at Gomtipur and Safikbhai at Bapunagar. However, police personnel from the Shahpur police station stopped him en route, arrested him and seized his meat on the suspicion that it was beef.

“Mian ko marke punya kama lo (thrash the Muslim man and you will earn blessings), the sub inspector said to the constables while offering them a chance to thrash me,” claimed Qureshi. 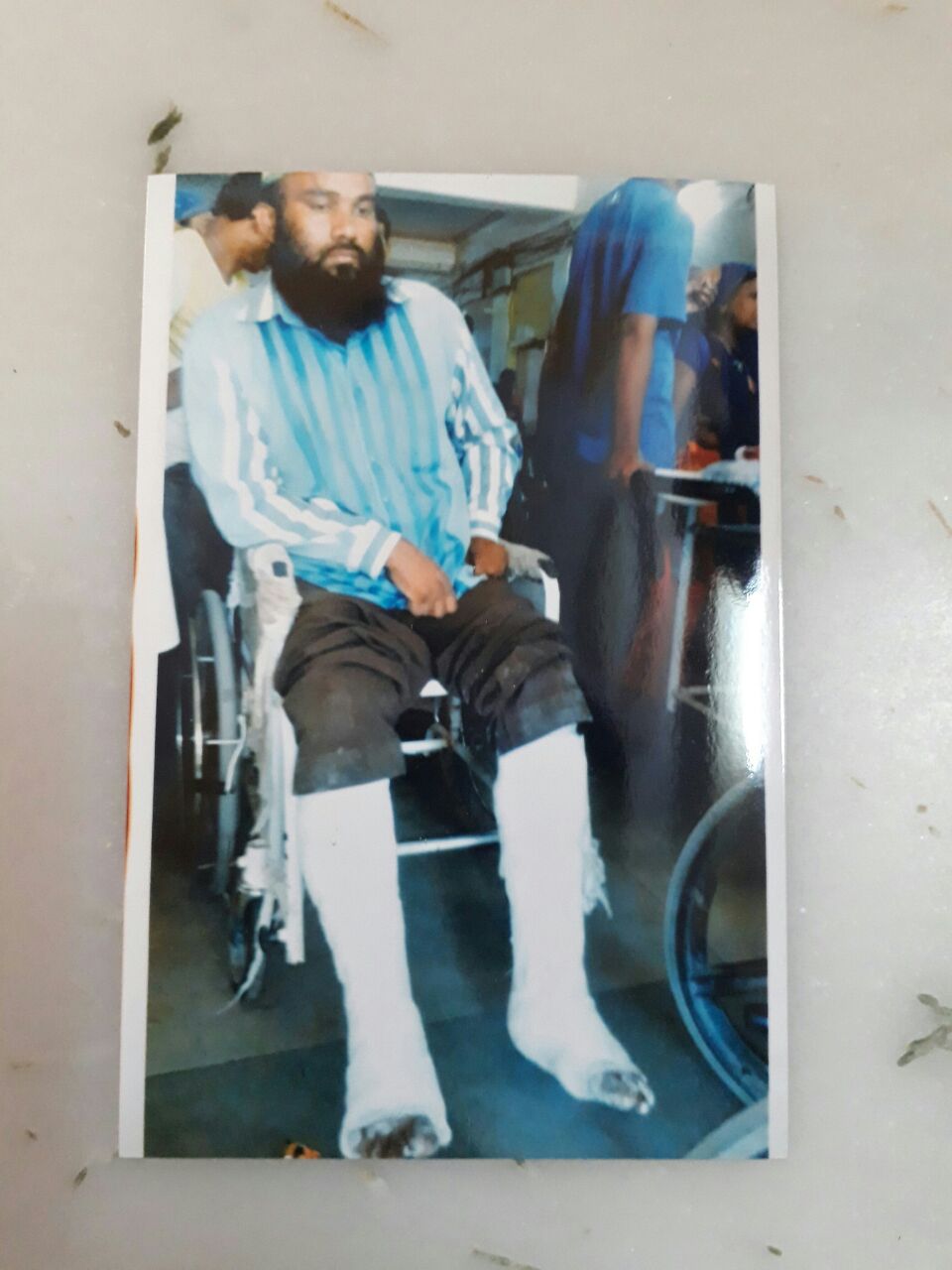 Qureshi when his legs were fractured. Courtesy: Damayantee Dhar

“Police harassment is not new in our profession. Just about a week before the Shahpur police had arrested me, the sub inspector had raided the Mirzapur meat market and then too he had seized the meat in my possession. The forensic report declared it to be mutton so I was saved that time,” he alleged.

Qureshi, severely injured, was brought back to the Shahpur police station after the three police personnel were done with him on the evening of May 21, 2016, he said. The next day (on May 22) the police released him on bail without the interference of a magistrate on grounds that his offence was ‘petty’.

Soon after his release, Qureshi was rushed to VS hospital in Ahmedabad where doctors confirmed that both his legs were fractured, along with severe lacerations on his buttocks and thighs.

“The doctors in VS hospital refused to admit me as the hospital was overcrowded that day. My two brothers-in-law, some friends and neighbours took me in an ambulance to Shahpur police station so that a complaint can be registered against the police atrocity. However, police refused to file an FIR, stating my injuries were minor and could have been from an accident. My family took me a police station on May 22 and May 23, and I gave two written complaints on both days. The Shahpur police registered a cognisable offence report and refused to file an FIR. That is when I decided to go to the high court,” stated Qureshi.

After Qureshi filed an application in the Gujarat high court, the court in an order passed on June 6, 2016 directed the Shahpur police to register an FIR in the matter. Despite the court’s order, the Shahpur police in a written communication to Qureshi on June 28, 2016 refused to file an FIR once again.

Meanwhile Qureshi, the sole earner in a family of four, remained bedridden, unable to earn.

“For about two months, we lived on the help we got from relatives and close friends. And then he (Qureshi) resumed work in just two months, while still healing,” said Madina, Qureshi’s wife.

“The quest for justice has not been easy. The Shahpur police tried pressurising Qureshi after he reached the court. The police called him three times to the police station on the pretext of an inquiry. When Qureshi could not be pressurised into taking back the application, the police reached our community leaders, who would pay us frequent visits and advise us to take back the application,” Madina continued.

“A few months after the high court ordered the police to register an FIR, our community leaders visited our home when I was alone and threatened me. They said Qureshi could be harmed and even killed in a staged encounter if he did not take back the application filed in court. I got scared for his life and broke down. I even begged him to consider his decision, but he stood firm,” she told The Wire.

After the Shahpur police refused to file an FIR despite the court’s order, Qureshi filed another application. This time, the high court ordered the commissioner of the Ahmedabad police to intervene on the matter and register an FIR.

“The applicant claimed that he was subjected to torture and reported the same at the Shahpur police station, but at the time he had not produced any medical certificate, hence a non-cognisable complaint was registered. Since a non-cognisable offence is petty is nature and not investigated by the police, the matter was being heard by the judicial magistrate. Subsequently, the applicant filed an application in court claiming it was a cognisable offence and that he had suffered a fracture. When the application reached this office, we appointed a police officer of assistant commissioner of police rank to supervise the matter. Following this, Qureshi was summoned by the officer and he refused turn up, and he explained to the court (and not to us) that H.B. Waghela, police inspector of Shahpur police station (who replaced then police inspector B.J. Ghadvi) had a coloured track record while being posted in another district. Hence he did not trust the officer, even though our logic was that the allegation is against the previous officer who is not posted at Shahpur police station anymore and in fact has retired,” stated A.K. Singh, the Ahmedabad police commissioner.

“When the matter reached the high court, we responded by summarising the entire course of events and informed the court that a non-cognisable complaint has been lodged and it is entirely in the jurisdiction of the judicial magistrate to aggravate it to a cognisable offence. It is not that he (Qureshi) has been denied justice. The high court, after considering the apprehension of the applicant, has said let another police station take the case with a new set of police personnel who are not concerned with the Shahpur police station. So now the Navrangpura police station will go through the application of the applicant,” added Singh.

“We had filed another application following the response from the office of the commissioner of police, stating that a cognisable offence report under Section 323 of Indian Penal Code is registered when the crime is petty, such as slapping a person. In this case, Qureshi had fractured legs and other severe injuries,” M.M. Tirmizi, Qureshi’s lawyer, told The Wire.

“Meanwhile, police claimed they have submitted the forensic report of the sample of meat that Qureshi was carrying on the day of his arrest. A copy of report was not handed over to us, but police claimed that the lab concluded the sample was buffalo meat,” added Tirmizi.

For the meat traders of Ahmedabad, the frequent police raids to the meat market on suspicion of beef has become order of the day. But usually no one would be arrested as long as the police is ‘happy’.

“The police here is as much a problem as gau rakshaks. In fact, police act as gau rakshaks here. They will pick up anyone based on a beef rumour, or raid the Mirzapur meat market and extort money – the amount could go up to Rs 50,000-60,000. In the case of Qureshi, the police demanded Rs one lakh, which he refused to pay. Had he paid the amount, the police would have let him go without a scratch,” said Danish Qureshi, a local social worker and president of the Democratic Muslims Forum, a city-based organisation that works for the welfare of minorities.

“I earn an average of Rs 25,000 a month, on which my family sustains itself. I do not have that kind of money to give away, so I refused. A year went by and then the police inspector of Shahpur was replaced by another police inspector. I had lost hope when the court ordered the transfer of the case to another police station,” said Qureshi, who still has in faith in legal system.