Past Continuous: Chest-Thumping Over Pokhran II Isn't the Way Forward 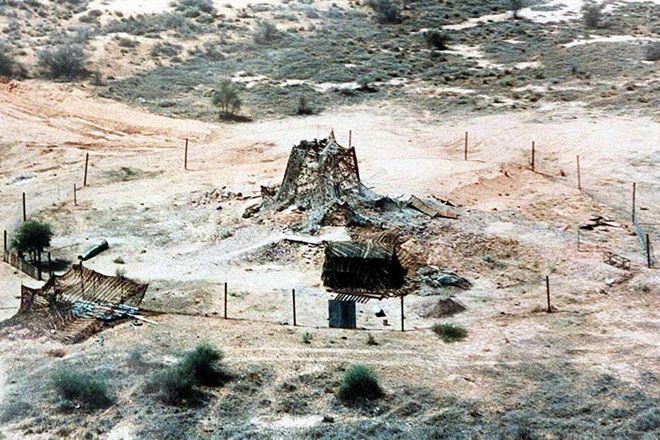 Whether or not it catapulted India into the league of the world’s greats is still a matter of debate, but there is little doubt that Pokhran II ended India’s nuclear ambiguity. Twenty years after the stated success of what is scientifically termed a ‘second-generation nuclear device’, it remains open to interpretation if the government’s decision to play the nuclear card backfired or not.

In a rare acknowledgement of achievement by any government prior to his, Prime Minister Narendra Modi in his latest episode of Mann Ki Baat took pride in the Atal Bihari Vajpayee government’s decision to establish India’s ‘nuclear prowess’ in the world. But in a way typical to him, Modi dragged a mythical element into the claim by reminding people of the most obscure detail on why May 11 was chosen for the tests.

Modi said the test was conducted on Buddha Jayanti or the day of the full moon which is also celebrated as Gautam Buddha’s birth anniversary. Modi claimed the tests demonstrated India’s proficiency in the field of nuclear science and technology and authenticated the nation’s military prowess. Yet, it was paradoxical for the prime minister to declare the tests as being done with the blessings of Lord Buddha.

On the one hand, the nation eulogises the Buddha for his renunciation of violence, but on the other, the country’s chief executive reminded people that the ‘smiling Buddha’ was not just a coincidence, a result of the explosion having to be advanced, but the day was consciously chosen. “Power of inner strength or that of the soul is necessary for peace. Similarly, when you are sturdy as a nation, you can be at peace with others,” Modi stated.

This claim is debatable, especially at a time when India’s standing in the neighbourhood is severely under strain and peace on its two most crucial frontiers remains elusive. The government’s critics will rightly say this arises from India not being ‘sturdy’ enough. Yet, even if for wrong reasons, Pokhran II remains a watershed event because it closed one option for India, which remains the chief reason why the subcontinent is dubbed the most dangerous place in the world.

Two decades after the explosions on May 11 and subsequently May 13, there are several ways to revisit the decision and assess its impact on national and global politics since. However, the prime minister’s laudatory comments have to be first seen from the prism of domestic politics, as the Rashtriya Swayasmevak Sangh launched commemorative programmes in March on the occasion of the Navsamvarsar, the Hindu new year. As part of this drive, a massive programme titled ‘Jagrut Hindu Mahasangam’ was held in Pokhran. There are plans of similar functions in various parts of India.

In 1998, with the decision to test the device immediately after assuming office, prior to making a reasoned assessment of likely fallout, the Vajpayee government pressed the nuclear button. Within days of the explosions, the BJP held nationwide celebrations and backed this with the declaration of intent to use the ‘achievement’ during assembly elections in Rajasthan, due late in the winter of 1998.

Elections are once again due in the state later this year, along with those in Madhya Pradesh, Chhattisgarh and Mizoram. Additionally, unless the electoral calendar is advanced by Modi, by this time next year, the whole of India will in the midst of parliamentary polls. The centrality of Pokhran II cannot be missed and it should not be considered a mere coincidence that the prime minister reminded the nation of a ‘glorious’ achievement of a government that has barely been ‘owned’ since May 2014. Seldom has any party in India – not that there have been many – taken decisions, when in government, critical for India’s security and diplomacy with an eye on domestic politics.

The ground reality preceding the Vajpayee government assuming power was different from what it was before Modi became prime minister. In 1998, there was no certainty of Vajpayee becoming prime minister, or the head of a more long-lasting government than his 13-day tenure in 1996. In contrast, it was a foregone conclusion that Modi would become prime minister, the only question pertained to the number of seats that the BJP would bag; would it get the majority on its own or be dependent on allies to cross the magic mark.

The over-anxiety of the Vajpayee regime to overnight push the nation into taking a decision for which it would be immortalised was understandable, if not acceptable. An editorial commentary by one of the founder-editors of The Wire rightly described the ruling establishment of the time as a “virgin on Viagra”. Another commentator, now a nominated BJP member of Rajya Sabha, wrote: “The target isn’t China and Pakistan. It is the soul of India…The mood is euphoric. Not the time for aesthete contrarians to embrace treachery.”

The BJP is virgin no more, but remains on Viagra. Yet, the overbearing nature of the Modi regime while dealing with global leaders has been of little aid to India. And it is now no longer a surprise when contrarians are termed anti-nationals.

There is also no love lost for the obsessive hugger, and it is time Indians acknowledged his ‘acceptance’ is due to ‘them’ giving the BJP that mandate in 2014. Take that away, the prime minister will be as much a pariah as he was prior to becoming premier. Reminding the world of Pokhran II can be a tactical ploy, but not when it is being strapped as an obvious electoral tool.

Reports of the time have it that the matter was settled on March 20, 1998 – on Vajpayee’s second day on Raisina Hills. The chief of Department of Atomic Energy, R. Chidambaram, had come in for what was not just a courtesy call on the newly sworn-in prime minister.

The BJP, after all, had spelt out its programme on the nuclear issue emphatically in its election manifesto. In just another fortnight or so, the formal nod was given to the man with curly locks who would later become India’s president, courtesy a deft move indicative of Vajpayee’s political ingenuity.

Much has been written in the Indian media on how the Americans were hoodwinked when the Indian team of defence forces and scientists adopted subterfuge and used codes which were so detailed and camouflaged that even the actual writers of the cryptogram were at times stuck deciphering these. Americans too have bemoaned how their intelligence agencies blundered and termed it “the intelligence failure of the decade”.

Americans, even if they accessed the messages, would have anyway been flummoxed trying to make sense out of a sentence which talked of whisky in the setting of White House and Taj Mahal. The elaborate game of deceit was drawn up because unlike Pakistan’s nuclear testing range in Chagai Hills, Pokhran’s terrain provided no cover. Everything could be spotted from the high-powered cameras fitted on advanced satellites, which kept the Rajasthan district within range all the time looking for any suspicious movement or action.

When Modi gloated over the success of Pokhran II, he repeated the error of the government of the time – to take pride in a logistical success. True, this can be denied only at risk of one’s credibility, but it is worth examining if the principal argument of the tests being necessary, because being a nuclear weapon state would be a deterrent against hostile neighbours, remains valid. More importantly, has India’s nuclear capability in any way enhanced India’s bargaining position on the high table of diplomacy, especially in the region?

Moreover, given the total veil of secrecy initially over critical examination of the ‘success’ of 1998, which was lifted somewhat after the claim at a seminar in August 2009 by K. Santhanam, a former Defence Research and Development Organisation (DRDO) scientist, that the thermonuclear device at Pokhran didn’t perform as expected, doubts remain over what was specifically achieved.

Two decades after the tests, the controversy over its ‘success’ is not over. Periodically, references are made at various fora on Santhanam’s claim, which has been refuted by several of his former colleagues. But given the fact that both sides still exist, there is an undeniable necessity to ‘settle’ the matter, and this can be least achieved by political chest-thumping.

The coming days are certain to witness a revival of interest in Pokhran II and the re-examination of issues linked with the success or failure of the tests, and its diplomatic, economic and strategic fallout. The worry, however, is that with the RSS campaign and the prime minister setting the tone for a discourse that would prevent healthy introspection, a crucial anniversary of an important landmark in Indian history will be lost.

During the planning of the Hindu Mahasangam, local RSS leaders constantly called upon Hindus to invoke bal or force and weaponry. It was argued that this was necessary to ensure Hindus do not become weak, because wherever they lag behind others, anti-national forces are powerful. Hindus need to be united, they say, and occasions like the 20th anniversary of Pokhran II “which made Hindus proud” must be celebrated in a befitting manner.

On the 20th anniversary of Pokhran II, India decided to close one option which was too significant to ignore. Careful separation has to be made between what has been claimed and what actually transpired. Rational assessment is necessary to ensure that watershed events like this do not end up solely as exercises in jingoism.