The prime minister's speech was less an address to a nation with several questions and more an attempt to present policy decisions as doles. 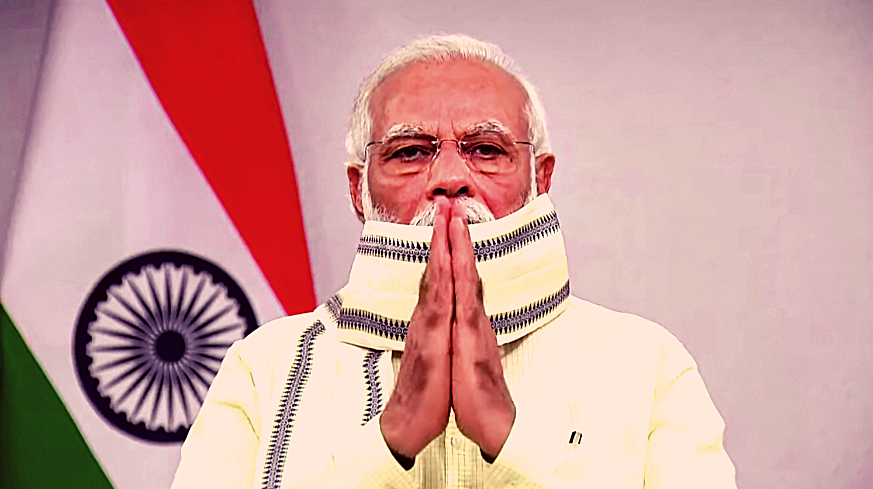 New Delhi: Cornered over its poor handling of COVID-19 pandemic and a shaky stance on the recent India-China face-off at the Galwan valley, the Prime Minister Narendra Modi’s sixth “address to the nation” since the outbreak of the pandemic became yet another opportunity for the Union government to capture headlines.

Over the last week, the Union government has driven a concerted campaign to shut opposition voices which have been raising critical questions against it, and steer the political narrative in its favour.

On Sunday, both the prime minister, in his monthly Mann Ki Baat radio programme, and the Union home minister Amit Shah, in an interview to ANI, attempted to defuse the escalating opposition campaign, raising questions about the competence of the Union government in handling national security issues and the health crisis.

Almost simultaneously, the Bharatiya Janata Party IT cell stepped up to sidestep these questions by encouraging calls to boycott Chinese goods in the aftermath of the Indo-China skirmish in Ladakh. BJP president J.P. Nadda came to the Union government’s aid when he blamed the former Congress governments for ceding “43,000 kilometres” of India territory to the Chinese, much to the entertainment of Twitterati who leapt to point out Nadda’s serious gaffe. (The figure he quoted was larger than the Earth’s circumference, which is estimated to be 40,075 kms).

Since last evening when the Prime Minister’s Office announced that Modi will be making a speech at 4 pm on Tuesday, BJP activists managed to create enough hype about it. On Monday night, even as the BJP IT cell raised the hypernationalist pitch, the Union government in retaliatory action, banned 59 applications owned by Chinese companies, including the very popular TikTok and WeChat apps.

While supporters of BJP in the media celebrated it as the ushering of a “New India”, security experts and economists pointed out that the step could hurt India more than China, and saw nothing in it except it being an unapologetic political stunt.

Revenues of TikTok’s parent company Bytedance in 2019:
India: $ 5.8 million
Global: $ 17 billion
So India accounted for 0.03 per cent, unless my math is wronghttps://t.co/CgQfi12xvvhttps://t.co/hNmBgSgL4D

Does the banning of Chinese apps make any difference to the situation on the ground in Ladakh? No.
Does the ban impose massive costs on China economically and technologically that it can’t bear? No.
Does it signal to Indians that the government is retaliating against China? Yes.

When Modi finally spoke, there was barely anything worth the hype. It was clear that domestic political considerations mattered to the Union government more than anything else.

The Prime Minister, in his characteristic style, appealed against negligence in social behaviour as lockdown measures are being eased, and urged them to take extra care in trying to fend off the coronavirus. He has already been doing so in his last few speeches.

A large section of people expected him to clarify the Indian position on India-China relations, but he did not touch upon it.

Rather, he used the platform to drown out opposition voices and other critical narratives against it.

While announcing the extension of the Public Distribution Scheme (PDS) benefits until November, the Prime Minister emphasised on the Hindi word “muft” (meaning free) multiple times.

Modi made out the government’s duty to ensure the right to food and dignity in India a mere dole that the prime minister was himself laying out.

He said that the ration scheme, under the Pradhan Mantri Garib Kalyan Anna Yojana, will be extended till November. For governments across the world, such an announcement would have been one of the emergency administrative decisions taken during a crisis. However, Modi thought it fit to announce the relief measure himself, and didn’t miss the opportunity to make political capital out of it.

“There will be an additional distribution of one kg of chana (Bengal gram) too in this period,” he declared.

He announced that his government has decided to extend the PDS benefits for the poor until November. As if this was not enough in itself, he decided to illustrate the point further, “Pradhan Mantri Gareeb Kalyan Anna Yojana Diwali aur Chhath Puja tak kar diya jayega…yaani 80 crore logon ko muft anaj wali yeh yojana ab July, August, September, October, November mein bhi lagu rahegi (‘The Prime Minister Kalyan Food Scheme will not be extended until Diwali and Chhath Puja. This means that this scheme will be in place in July, August, September, October, and November’),” the Prime Minister said.

His speech was laced with similar hyperbole, true to his style of presenting even a minor announcement as if it was something path breaking. With an unwarranted emphasis on figures, Modi said that in the last three months, the poor were extended benefits worth nearly Rs 2.75 lakh crore.

He also said more than Rs 31000 crore were deposited directly to 20 crore Jan Dhan accounts, while the government released Rs 18,000 crore to be deposited in the bank accounts of around nine crore farmers. He added that Rs 50,000 crore was also spent to generate employment for rural workers under the PM Gareeb Rojgaar Yojana.

For a country with 130 crore population, a majority of who are poor, Modi quite gratuitously compared India with the US, UK, and European Union. The size of the “free ration scheme” in India was 2.5 times more than the US, 12 times more than Britain, and two times larger than the whole EU, the prime minister made it a point to say.

Since much of the criticism against his government was on the way it handled the migrant worker crisis, he swiftly added that India is on its way to implement “one nation, one ration card” system soon.

Even as he said that Modi did not leave the opportunity to give a cultural spin to these announcements. He presented these PDS measures as relief for the upcoming Hindu festival season. He tactfully singled out Eid-ul-Adha, which will be celebrated in July, and Guru Purab, observed by Sikhs, in late November for omission in the list of festivals he mentioned in his speech.

At the same time, his reference to Chhath Puja, a popular Hindu festival celebrated annually in the poll-bound Bihar, also did not go unnoticed.

The “one nation, one ration card” idea has been in circulation for a long time now, but Modi repeating it indicated that he had his party BJP’s election prospects of Bihar, which has the largest number of migrant workers in India, in mind.

Much of the figures Modi mentioned in his speech look good only on paper. While attacking him for maintaining absolute silence on China, Congress spokesperson Gourav Vallabh broke down those figures. He said that the PDS benefits were grossly insufficient. The one-time cash transfer that the PM spoke about was around Rs 500 per family, and the ration kits too have been proving abysmally low in the absence of any income among a large number of families in the last few months.

He said that the Congress president Sonia Gandhi had already been demanding that PDS benefits be extended. “PM Kisaan Yojana is a two-year old scheme which is again and again announced. ‘One nation, one ration card’ has been announced in the parliament nearly 20 times,” he said at a NDTV show, demanding that at least Rs 7,500 cash should be transferred to every poor family.

Yet, the BJP spokesperson and Union minister Prakash Javadekar emphasised on the “muft” aspect of the PDS welfare scheme, soon after the PM’s speech.

The line between the government and the BJP has continuously been thinning over the last six years. Political priorities of the BJP have often been passed off as the Union government’s statement, or positions.

Only recently, the Prime Minister’s Office tweeted to attack the erstwhile governments led by opposition parties in Uttar Pradesh, while extolling the Adityanath government for its handling of the pandemic in Uttar Pradesh. 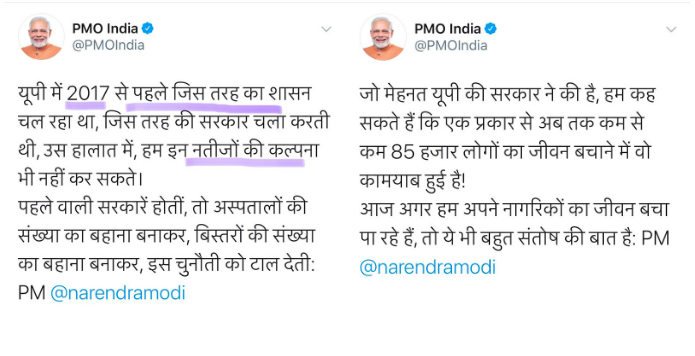 Modi’s speech on Tuesday is yet another case in point.