While urban voters are leaning towards the BJP, agricultural crisis and growing unemployment have alienated rural Patidars from the party.

Patel community members during their a rally for reservation in Ahmedabad. Credit: PTI 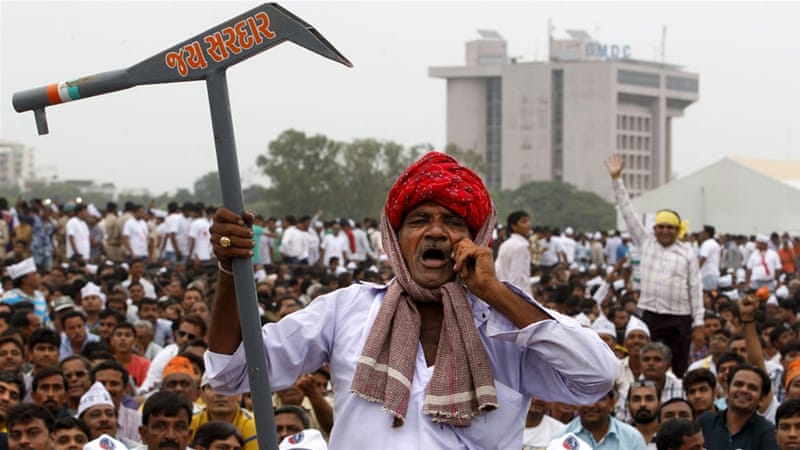 Mehsana: A large part of the Patidar agitation in August 2015 centred around its criticism of the current reservation policy for scheduled castes, scheduled tribes and other backward classes. It was soon seen by many outside Gujarat as one of those recent movements in which a dominant-feudal community, akin to Jats in Haryana and Marathas in Maharashtra, was rising against the government to demand reservation when in reality, it demanded an end of reservation for even the marginalised communities.

However, even a hurried visit to the Patidar-dominated regions would tell you that this may not be the only aspect of the movement led by the young community leader Hardik Patel. A two-hour drive from the capital city, Ahmedabad, towards the villages of northern Gujarat presents a multifaceted understanding of the Patidar resentment.

Mehsana, Patan and Gandhinagar districts in the northern part of Gujarat are dominated by Patidars, who are influential both electorally and socially. Here, they are the biggest land-owning community. They were once the richest farming community in the state and, quite smartly, invested a large chunk of their agricultural surpluses in different small- and medium-scale industries.

These areas are also home to Prime Minister Narendra Modi, deputy chief minister of the state, Nitin Patel and many other top BJP leaders. For the last three decades, the saffron party has commanded an unwavering support of the Patidars. The community, according to many political analysts, has been the backbone of BJP’s colossal organisation in the state.

But the region has now become the nerve centre of the Patidar Anamat Andolan Samiti’s (PAAS) activities. Founded by Hardik, PAAS organised huge protests to demand anamat or reservation for Patidars in mid-2015. The protests were triggered by the alleged suicide of a Patidar teenager after he failed to secure admission in an engineering college despite securing more than 90% marks in his intermediate examination. A few protesters were also killed in different incidents of police firing, further fuelling the community’s anger.

What was behind this sudden eruption of anger? After all, Patidars enjoyed the riches and were patronised by the BJP government. But the economic cleavages of the Gujarat development model, as reported by multiple studies, bear testimony to the fact that this anger was actually building up over the past few years.

Also read: Interview: Distress in Gujarat Is Real, Modi Alone May Not Be Able to Do Damage Control

A long spell of an ever-deepening farming crisis, followed by recent losses in their mostly small-and-medium businesses, have forced the young Patidars to look for jobs. While their first preference remains the scarce government services, many of them have not been able to find employment even in the large number of private industries, which mushroomed in Gujarat during Modi’s tenure as the chief minister of the state.

For instance, the youth of Sujanpur village of Patan spoke thus.

“What am I supposed to do? All of us got some vocational degrees after spending a lot of money in colleges. But despite that, we are sitting idle,” said the 23-year-old Narayan Patel on behalf of a group of young men who had gathered at the village square.

“Not just Patidars, my friends in the Koli, Rabari and Brahmin communities have not found any employment,” he added.

A constant refrain among the youth was that of privatised education leading to no benefits for them. “The colleges make a lot of money because of us. But let alone jobs, they do not even teach us the subjects well.”

Another friend of Narayan intervened, “The teachers in Mehsana engineering and MBA colleges are paid only Rs 10,000 or less than that. They know nothing. Why should a good teacher join these colleges at such low salaries?”

The industries around their villages hire people from outside, one of them remarked. “We sold our lands to these industries but have not been able to profit from them much. The money we got from the land is gone too as we had to suffer losses in part-time businesses we opened from that sum,” Narayan added.

Clearly, aspirations of these dominant Patidars are high. None of them wants anything that resembles blue-collar work. They want jobs that befit their social status in villages.

In the neighbouring village of Ganglasan, a bunch of elderly Patidars wholly agreed with this assessment of circumstances by their community’s youth.

“Look, we have been farmers all our lives. We earned well but now that is no more a case. Modi promised us canal water. But nothing has come yet. For the last four years, we have suffered constant losses in farming. What will our children do, we wonder,” said Jayantilal Patel, a groundnut and castor seed farmer.

“We cannot be completely rain-dependent. So we depend on someone who invests in boring pumps. Here, we have to dig at least 1,200 feet below the ground to draw water. It costs around Rs 22-23 lakhs. Around 100 farmers in this village are completely dependent on it. But the commission for that is huge as a third of the crop has to be given to the person who invested in the pump,” said Vinod Patel, adding that he barely saves anything after selling his crop. 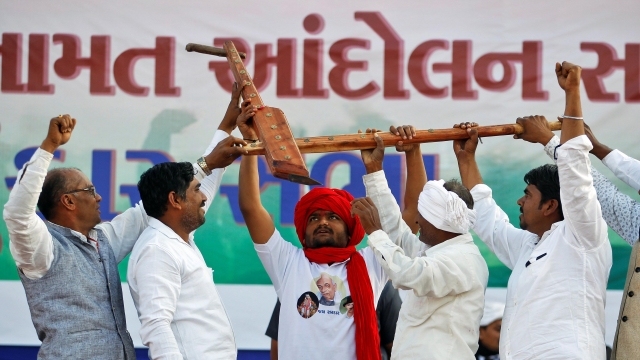 With this sudden reversal of fortunes, the community that had been enjoying many privileges has become the first one to respond to the jerk that the corporate-driven economic model has brought with it.

As the state gears up for the polls on December 9 and December 14, a majority of Patidars in north Gujarat villages seems determined to vote against the BJP. Hardik recently declared his support to the Congress but a few Patidars of Mehsana and Patan The Wire spoke to also expressed their desire to vote Aam Aadmi Party, which is putting up a fight in some of the north Gujarat seats. The sentiment to vote out BJP is the most fundamental among Patidars and this has altered social dynamics in the village quite visibly.

Patidars were at the forefront of the anti-reservation movements in 1981 and 1985 against the Congress’s Kshatriya, Harijan, Adivasi, Muslim social coalition stitched together by the then chief minister Madhav Singh Solanki. BJP capitalised on this sentiment and built its organisation in Gujarat with the support of Patidars and its traditional base of other upper-caste groups. Over the years, BJP advanced its Hindutva politics and that became the common strain among a majority of Hindu groups when it came to voting.

Modi’s infrastructural push in the state, along with his image of the ‘Hindu Hriday Samrat’ that he strongly cultivated, made the BJP emerge stronger. Elections on the ground actually became only a playground for Hindu versus Muslim politics even as the BJP often projected the development rhetoric as the reason for its successive victories.

However, the twin-strategy that became a uniting sentiment among most Hindu groups seems to be collapsing in north Gujarat. Exhausted and disillusioned with many years of BJP state government now, the largely acrimonious Patidars have been foregrounding its failures on the economic front and are highlighting what they see as the party’s “doublespeak” like never before in the last three decades.

“The Patidars have mainly two demands. One, the reservation policy should be scrapped or we should be included. Two, we want the government to put an end to private education institutes,” Ramesh Patel, the eldest in the Ganglasan group said.

“We have realised that the BJP used us in the name of Hindu-Muslim politics. We will not fall into that trap again. Even if Modi comes and directly appeals to us, we will not budge this time. It is a question about our children’s future.” he went on to say.

On being asked why the farming crisis is not on the top of their agenda, he seemed confused but eventually had an answer. “Khedut (farmers) do not have a future. It is only a loss-making exercise. None of our children wants to take up farming anymore.”

Clearly, the politics in the state is in a state of transition. Patidars of Ganglasan and neighbouring villages have been vigorously interacting with groups which have never voted BJP, and which includes OBC groups like Thakors and Rabaris, with whom Patidars have only shared historical rivalries, a section of Dalits, and more significantly, the Muslims.

“We need to put up a strong fight against BJP. For that we need to come together,” Dasrath Patel, an influential Patidar who runs a nursing college in Mehsana, told The Wire soon after he convened a meeting comprising a large number of powerful Muslim and Thakor men of the area. Religious polarisation which had become so common ahead of Gujarat polls appears to be absent in north Gujarat.

It is, therefore, why the BJP is taking extra care to neutralise the damage that acrimonious Patidars may incur in the upcoming assembly polls. The deputy chief minister Nitin Patel, who is himself contesting from the Mehsana seat, has been given this tough turf by his party to minimise the hurt.

BJP has been trying multiple tactics to contain the hostility against it. First, it tried to poach PAAS leaders in the past few months but this has backfired too. Key PAAS leaders, Narendra Patel and Nikhil Sawani, shot back by levelling bribery charges against the BJP a day after joining the party in October.

Second, although BJP has denied it categorically, political analysts feel that it has used a multi-layered propaganda to defame Hardik by leaking the so-called “sex CD” and other such videos.

Third, it has been trying to gain from the contradictions among Patidars. The BJP supporters are campaigning among Leuva Patels, a sub-caste among Patidars, against PAAS and Hardik, who is a Kadava Patel. It has also been reaching out to affluent and middle class city-dwelling Patidars with such campaigns.

While the first and second tactic may not have worked as the BJP had imagined, the third has partially been successful. Many Patidars from different economic backgrounds The Wire interacted with seem to be closing in on BJP for voting. “One more chance to BJP” or “Congress will work only for Muslims” are a few responses that one heard in Ahmedabad and Gandhinagar from Patidars across all age groups.

In cities, Hindu versus Muslim politics still thrives. But along with this urban narrative also runs a parallel story about anguish and despair in villages of the poll-bound Gujarat. Dismissing the Patidar anger as only a dominant caste’s reaction misses the larger failure of a government that has the record of performing quite poorly in terms of social indicators.