Party Strengths, Possible Alliances: What's in Store for the 2022 UP Elections?

If the recent panchayat elections are any indication, BJP will not have it easy in the upcoming elections in the state. Carefully stitched alliances can upset BJP's calculations.

So, based on this panchayat elections’ mandate, we cannot accurately predict who is going to be the likely winner in the upcoming assembly elections. However, despite a not-so-high-profile campaign by SP in the Uttar Pradesh panchayat elections, it has scored a big victory and that signals a change in people’s mood. The Aam Aadmi Party has also registered its presence with a significant number of seats in UP’s three-tier panchayat system.

Also read: UP Panchayat Polls Give BJP Yet Another Jolt, But Party Proclaims Victory Anyway

The BJP won the second highest number of seats in the recent panchayat elections. Now it is trying its best to woo independents so that it can win the chair positions of most zila panchayats and block panchayats, a game in which the BJP can outsmart any party because of its stature and money power. It will certainly face tough competition in the assembly elections, but still, there is a good chance that it can win. The anti-incumbency factor and the government’s failure to manage the COVID-19 situation may severely impact its chances. However, it has been observed time and again that Indian voters have a short-lived memory. In the Bihar elections last year, the state government’s apathy towards returning migrant workers did not seem to have impacted the election results.

Apart from the pandemic, there are other factors that create voters’ perceptions. The BJP has the strongest vote bank in Uttar Pradesh among all states. The party is very adept, with the help its IT cell and pliant media, at polarising voters on communal lines or on the basis of hyper-nationalism just before elections, to divert the public’s attention away from misgovernance. Finally, they had successfully crafted a TINA factor – “If not Modi then who?” – which clearly failed to yield results in the West Bengal elections in spite of a high-decibel campaign.

The likelihood of BJP’s defeat

If it is defeated, the biggest reason will be the pathetic management of the COVID-19 crisis, which has exposed the government’s failures and tainted the image of the ruling party badly. It has shaken the faith of a large section of people in government. Unprecedented unemployment, increasing income disparity and the poor law and order situation are other reasons for people’s dissent. Before this crisis, the government also witnessed people’s anguish against the Citizenship (Amendment) Act, National Register of Citizens and farm laws. The ongoing farmers’ agitation is certain to dent BJP’s show in western Uttar Pradesh.

In terms of caste equations, Brahmins, Vaishyas and other forward castes are traditional supporters of the BJP. In the case of western Uttar Pradesh, in the last assembly elections, the Jat community had mostly voted for the BJP, but this time they are likely to vote for Rashtriya Lok Dal (RJD) largely due to the farmers’ agitation. The Vaishya community has also suffered immensely due to lockdowns and various BJP government experiments like demonetisation and the Goods and Services Tax (GST). This resentment is likely to be reflected in the election results.

An alliance among opposition parties could play a key role in the BJP’s defeat, just like in Tamil Nadu.

Can SP, without alliance, win the election?

The SP is aspiring to win the election without an alliance. In the last assembly elections, it fought in alliance with the Congress. In 170 seats, the SP secured the second position, whereas Congress emerged second in 49 seats. The Bahujan Samaj Party (BSP) became the largest obstacle for the alliance. BSP received 22.2% of the votes, SP got 21.8% and Congress about 6.2%, while the NDA received 39.7% of the votes in the 403 constituencies. This data indicates that if the SP is fighting alone, its votes are drastically reduced, and it may just fall short of success like in Bihar and Assam. 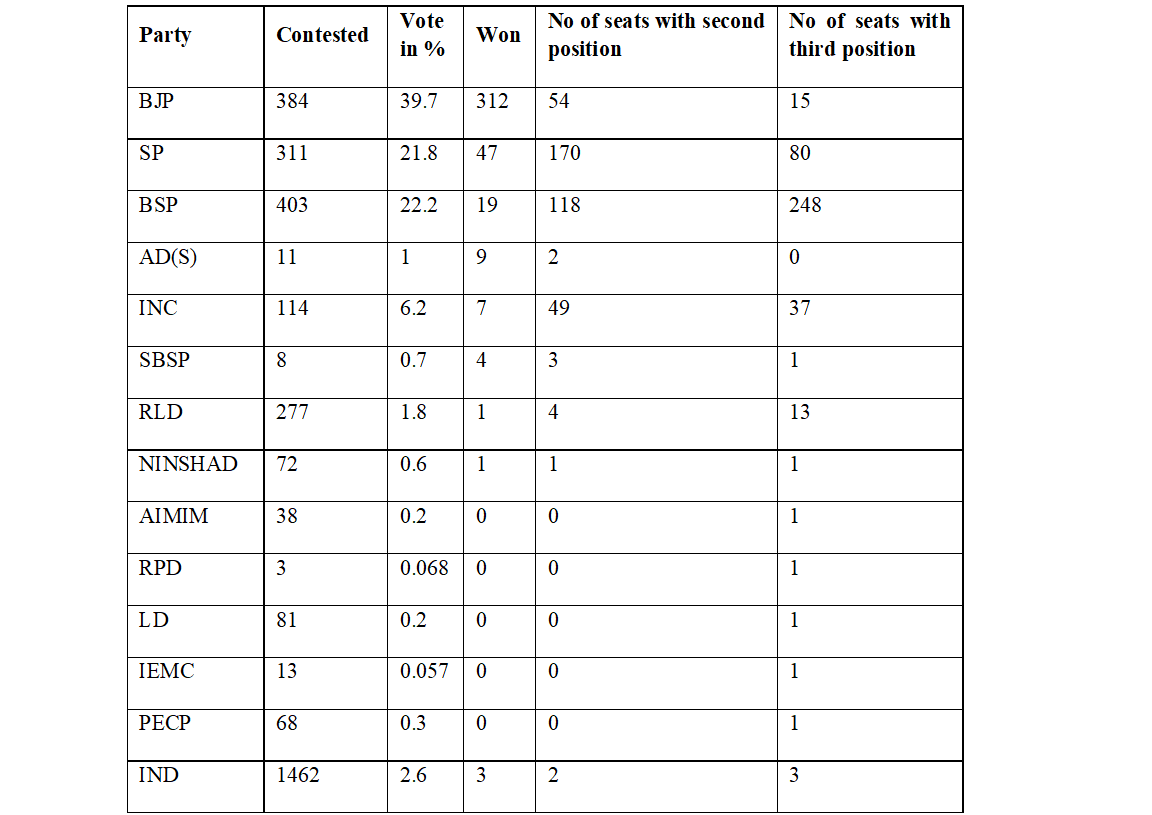 Results of the 2017 assembly elections in Uttar Pradesh.

On the basis of the panchayat election results, it may not be appropriate to predict a victory for SP in the assembly elections, because it was not fought on party symbol. People exhibit different voting behaviour in parliament, assembly and panchayat elections.

In panchayat elections, voting is often more based on individual persona and connection, rather than the party behind the candidate. Therefore, SP must not be misled and should think in terms of bringing opposition parties together. However, because of its unpleasant experience with BSP and Congress in the past, it remains to be seen whether Akhilesh Yadav is willing to build bridges with these two parties. 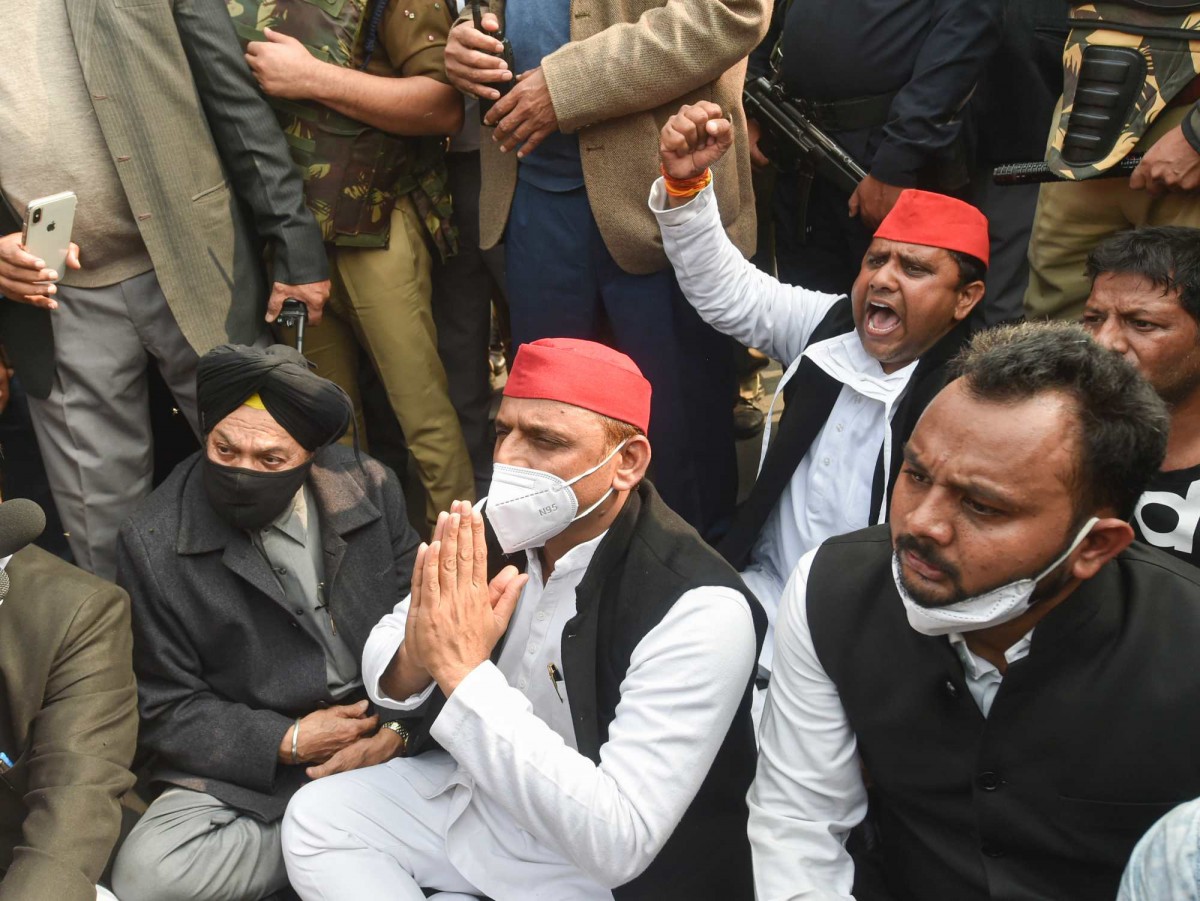 The only party that SP is sure of allying with is the RLD, which will benefit both parties. The other party that SP should consider bringing in its alliance fold is the Suheldev Bhartiya Samaj Party led by Om Prakash Rajbhar, which won four seats in the last assembly elections as an NDA partner, but is now estranged from that alliance.

Although Akhilesh has formed a Baba Saheb Vahini within his party on the last Ambedkar Jayanti, he would do well to explore an alliance with the Azad Samaj Party of the upcoming Dalit leader Chandrashekhar Azad. SP should learn from the distribution of seats by the Secular Progressive Alliance in Tamil Nadu which resulted in a huge victory of the alliance.

If BSP and All India Majlis-e-Ittehadul Muslimeen (AIMIM) come together in Uttar Pradesh, then the beneficiary may be the BJP like in Bihar and Assam assembly elections where the secular vote was split. This alliance will damage the SP alliance. The possibility of alliance between BSP and SP seems to be negligible.

The Congress must be realistic at this time. It must accept that it has lost its voter base. In fact, it became the reason for the failure of Mahagatbandhan alliance in Bihar assembly elections by contesting a large number of seats. It won only 19 seats out of 70 seats, that is a victory over 27% of contested seats, whereas alliance partners like Rashtriya Janata Dal (RJD) and Communist Party of India (Marxist-Leninist) won on more than 60% of contested seats.

It also lost the election in Assam for not propping up a popular face, and because of its failure to form an alliance with newly founded parties which had been the voice of Assam during the anti CAA protests. In Bihar and Assam, where its ambition got the better of it, Congress lost badly. While in recent Tamil Nadu assembly elections, Congress made reasonable adjustments with its alliance partners resulting in the grand victory of the Secular Progressive Alliance.

Lessons to be learnt in alliance politics 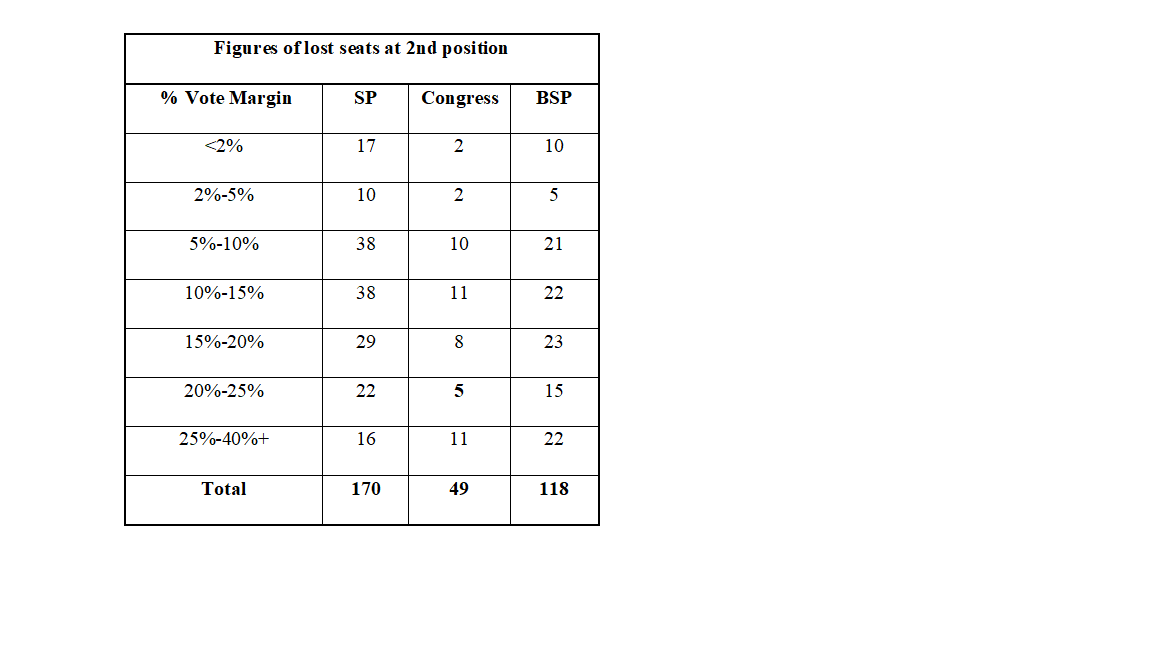 Results of the 2017 assembly elections in Uttar Pradesh.

The mandate in the last Uttar Pradesh assembly elections, last Lok Sabha elections and recent panchayat elections clearly show that Congress has lost its large voter base. In the coming elections, if it fights alone, then it may barely win a few seats but may harm the winnability of SP. If Congress compromises on its ambition and forms an alliance with SP and contests only in select seats, then the alliance can emerge victorious. Support to regional parties by the Congress may pay off in the Lok Sabha elections.

In a nutshell, if SP enters into an alliance with RLD, Congress, SBSP, ASP and possibly AAP, to control the division of secular votes that will be caused by the BSP-AIMIM alliance, then the SP-led opposition alliance is likely to win.

Divesh Ranjan is a political analyst, Brijesh Kumar Rai is a former faculty member of IIT Guwahati, and Sandeep Pandey is the vice-president of the Socialist Party (India).