Baptism Through Disruptions: Parliamentary Practice in a Democracy Under Siege

We must change the parameters we use to judge the "productivity" of parliament.

A view of the Rajya Sabha during the Monsoon Session of Parliament, in New Delhi, Thursday, August 5, 2021. Photo: RSTV/PTI

My first few days in the Rajya Sabha were tumultuous enough to realise that classics like Erskine May’s Parliamentary Practice, the bible of Westminster, would really have to be ‘tropicalised’ a lot to adjust to the gross realities of the world’s largest and beleaguered democracy. The small endoscopic view of parliament’s functioning also leads to the belief that it has more to fear from those who have utilised its electoral facilities to seize power than from external dangers that the regime periodically projects, to augment its hegemonic measures.

The matter gets more complicated because the educated Indian, liberal or otherwise, has been house-trained into believing that the one and only acceptable model is where eloquent debates are conducted in clipped Oxbridge accents, as shown on BBC. Many friends who represent, perhaps, a large section of the powerful educated elite of Hindustan have, therefore, made it clear that they consider the Indian opposition’s current protests in “the well of the house” to be quite appalling. The nation has to bear a huge cost for each day of parliament, we are told, and disruptions affect the ‘productivity’ of parliament. This view is sadly reminiscent of the ‘return on investment’ calculation that works neither with god nor with government, and parliament is not really a factory assembly line that counts “so many bills in, so many bills passed”.

The major difference in being inside the House amidst all its tumultuous proceedings versus watching it on television, whether ‘live’ or later-edited versions, is that it is certainly more vibrant and resounding inside. Reporting or presenting the proceedings is difficult as the audiovisual feed is controlled by those who direct the cameras and switch microphones on and off – to emit just the desired sound bites. The narrative is, therefore, what the establishment desires it to be – not what it actually was.

But then, this is exactly what the regime has been manufacturing, within the House and everywhere else, and also getting away with. All that one heard within the house was endless refrain of slogans demanding discussion on the Pegasus spying scandal and  on withdrawing the farm Bills. Instead of responding as democracy and civility enjoin, the treasury benches kept pushing in new legislation, taking full advantage of the protests.

A party whose leader has not yet faced one proper press conference in seven years and is unable to come before parliament to respond is obviously more comfortable in getting its job done without any democratic debate. Even though the government side muted every microphone of ‘troublesome’ members of either house who protested, all that could be heard even over the official microphone network were resounding slogans.

The prime questions that the united opposition seeks (and a lot of ruling party members are also keen to know) are: why did the government buy the world’s most expensive telephone-hacking and espionage software, Pegasus, to spy on its citizens and, that too, by endangering the nation’s security by a deal with a notorious foreign firm that can trade in secrets? Narendra Modi’s deafening silence on the issue is indicative enough of his answer, and his avoidance of parliament is a historic mistake that he would remember for ages. The freshly-energised Supreme Court’s opening volleys on this episode lead to very serious questions and it appears that an unforgivable violation of the basic principles of correct governance has, indeed, occurred.

Students of history are familiar with certain regimes insisting on recording their ‘version’, however distorted or untrue, as the official and only acceptable one – overwriting facts recorded earlier, palimpsesting or overlaying truer narratives. An example that comes to mind is that of Alexander’s invasion of northwest India. Brahminical history simply decided to erase this memory and insisted that there was no Alexander and nor any invasion. Therefore, the Puranas or Itihas composed during or soon after this period overwrote on facts and declared its version as ‘history’ – that Indians swallowed for two millennia. It was only when undeniable evidence of Alexander’s adventure was was shown from world history, that Indians learnt about this invasion. 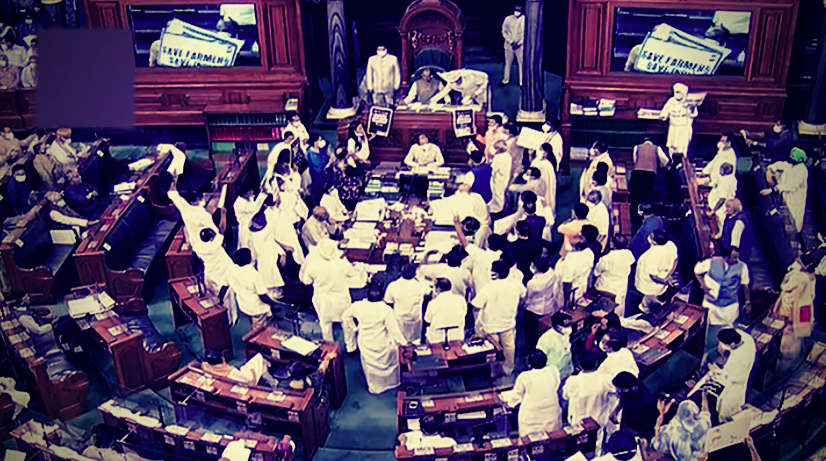 Representative image of the parliament during the Monsoon session of 2021. Photo: PTI

When ‘parliament’s productivity’ is raised, it is also submitted that one of the chief duties of MPs is to voice concerns on issues that endanger India as a whole and grievously harm or seek to destroy its very edifice of transparency and democratic governance. Without this duty, we would soon be like the parliamentary bodies in China or Russia, where all that well-dressed parliamentarians have to do is to rise in unison like a chorus to clap, cheer and support the great vision of their infallible leader.

Unless we put up a bold resistance immediately, we appear to be heading inexorably in that direction. This is evident also from the fact that Modi has been consistently undermining the most important task of the legislature, i.e, examining legislation and highlighting the possible consequences of its powers. Committees of parliament are adept in this task and the previous regime (2009-14) submitted 71% of its proposed legislation to committees for examination and improvements – where MPs from the BJP and other opposition parties were quite vocal and active. In contrast, during his first term (2014-19), Modi’s government sent only 25% of its bills to committees. In Modi’s next term, the situation worsened, and in September 2020, we saw that only 17 of the 82 bills introduced in parliament were referred to standing committees for in-depth reviews. There are several Bills that have been passed on the same day that they were introduced (or on the very next day), obviously without any meaningful discussion.

The manner in which the farm Bills were introduced and rushed though is a visible example of sheer contempt for elected legislators. Naturally, the debate that should have taken place in parliament now scalds several parts of India – causing hundreds of deaths. Any self-respecting regime would be rueing its indecent haste, even though its rush may have been spurred by certain big economic interests.

Also read: The GST Council Is a Constitutional Crisis in the Making

On August 4, my first day in the Rajya Sabha, I watched rather helplessly as the treasury benches amended the law on Limited Liability Partnership in 23 minutes amidst vociferous protests; changed the Deposit Insurance and Credit Guarantee Corporation law likewise, in just 16 minutes, and hustled in just 18 minutes the Airports Economic Regulatory Authority of India (Amendment) Bill – that may well favour certain big businesses. After each Bill was pushed through like this, the house was adjourned for a while and then the next operation was taken up in like manner.

On my second day in parliament, August 5, the law on Scheduled Tribes was amended in 14 minutes amidst din and the very grave issue of the management of the air quality of the National Capital Region decided in 34 minutes flat. The most dangerous of them all was the Essential Defence Services Bill, that empowered the Union government to prohibit strikes, lock-outs, and lay-offs in ordnance factories – obviously because the regime has plans to downsize them soon – and encourage favoured capital to engage in essential defence production. All in a jiffy – while respectable and responsible leaders of national parties tried desperately to drill some sense into a hubris-driven entity.

We need to evaluate issues like ‘time utilised’ and ‘parliamentary productivity’ in such a context and with hard facts – like the minimal time required for some quality and depth in debates. Since the prime minister has problems with Derek O’Brien’s description of the undesirable rapidity as quickly-prepared ‘papri-chat’, he may like to consider the term stamping or franking machines for such legislation.

This applies to the nation’s critical finances as well – and partly explains why they are in such a mess. The entire budget for 2018-19 and all its demands for grants were passed without discussion. We must remember that, throughout history, autocracies have always been hopelessly in love with bureaucracies, and also that legislations are prepared mainly by bureaucrats, not by legislators. The political executive does have a ‘diner’s choice’ of the dish, but the actual cooking is what the chefs produce. Not that this is inherently evil or can be changed drastically, but this is where the committees of parliament can play a very big role by questioning those who draft laws and by guiding them or modifying the bills. Most bureaucrats actually stand to gain from the process, though they do spend sleepless nights, apprehensive of the committee’s grilling.

Thus, in its unseemly impetuosity to tell parliament that he alone is the boss, Narendra Modi is actually bureaucratising the Indian state, and this has dangerous ramifications – which may soon boomerang.

Modi’s contempt for parliament becomes even more clear when we compare his first six years with Vajpayee’s six. Modi spoke 3.6 times a year in parliament or 22 times in six years while Atal Bihari Vajpayee spoke 77 times in the same period as prime minister. And we all know, Modi loves to talk – to masses he can hypnotise, not to those elected by the people or by the states to hold him accountable. Even Manmohan Singh spoke more than him and Modi has mocked him constantly for his economy of expression.

Finally, it is time to remind ourselves that the BJP has thrived most on agitations – aided and abetted by forces of protest that are yet to be studied properly – within the house and outside as well. How can the BJP accuse other parties of disruptions, when it alone destroyed the largest chunk of time (146 hours of the 163 hours) that was available for debate – by continuously disrupting proceedings during the Budget session of 2013? Arun Jaitley, Sushma Swaraj and other BJP leaders had hailed ‘disruption’ as a very legitimate instrument of democracy, which is more true now as the government uses its brute majority not to permit discussions – even on a subject like spying and compromising on national security. It cannot blame the Trinamool Congress for leading disruptions on this issue and almost the whole of a rejuvenated opposition from joining one of the longest unbroken parliamentary protests in history.

As a report called The State of Democracy in South Asia produced by the Centre for Studies of Developing Societies (CSDS) in 2017 reveals, there is a dangerous distrust of the democratic process. This is very dangerous because we may collapse like the Weimar Republic if the regime feeds on such despair instead of working towards dispelling despondency. And the Reichstag would not even require devilish arson for the coup de grâce.

Jawhar Sircar, a former IAS officer, is a member of the Rajya Sabha for the Trinamool Congress.