A view of the Rajya Sabha during the Monsoon Session of Parliament, in New Delhi, Thursday, July 22, 2021. Photo: PTI

New Delhi: Both houses of parliament saw multiple disruptions and adjournments over opposition protests on the findings of the Pegasus Project – carried out by a global media consortium including The Wire – and the agriculture laws and protests around it.

The Rajya Sabha saw high drama as a Trinamool Congress (TMC) MP snatched papers from Communications and Information Technology Minister Ashwini Vaishnaw in the Rajya Sabha and tore those as the minister was about to make a statement on the alleged snooping row using Israeli spyware Pegasus.

TMC, Congress and other opposition party members, who had earlier protested in the Rajya Sabha, leading to two adjournments of the proceedings, rushed into the well of the House as Vaishnaw rose to make a statement on the issue.

TMC MP Shantanu Sen snatched the papers from the hands of the minister, tore and flung those in the air.

Vaishnaw said he was laying a copy of the statement on the table of the House.

Deputy Chairman Harivansh asked the members to desist from unparliamentary behaviour, before adjourning the proceedings of the House for the day.

“Please do not adhere to this unparliamentary practice,” Harivansh said, adding that the report that all MPs want to hear has now been laid on the table of the House and it can be discussed.

He called the minister to read his statement and Vaishnaw read out a few sentences before the ruckus drowned his voice and he said he was laying the statement on the table of the House.

“You do not want a discussion on an issue you have been agitated about…this is undemocratic,” the deputy chairman remarked.

Amidst protests, the deputy chairman sought that parliamentary committee reports that could not be laid at the scheduled hour in the morning also be laid. Soon after, he adjourned the proceedings for the day.

Earlier in the day, opposition MPs stalled the proceedings in the Upper House of Parliament, forcing two adjournments.

The proceedings were first adjourned for an hour till noon and then till 2 pm, within minutes.

Congress leader Digvijaya Singh tried to raise the issues of income-tax raids on newspaper group Dainik Bhaskar, but was disallowed by the chair. 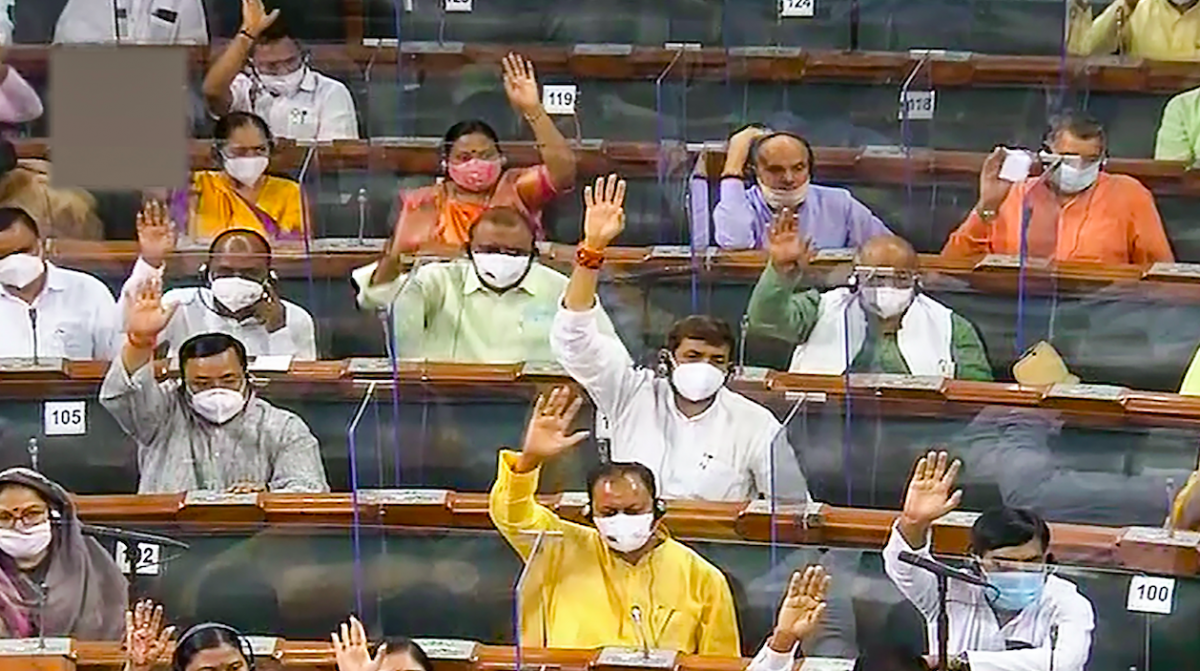 Members in the Lok Sabha during the Monsoon Session of Parliament, in New Delhi, Thursday, July 22, 2021. Photo: PTI

As the House reassembled at 12 noon, Bhartruhari Mahtab who was in the Chair asked the protesting members to go back to their respective seats and engage in discussion.

Parliamentary Affairs Minister Pralhad Joshi said that the government was ready to discuss any topic the opposition wanted.

“Rajya Sabha had a discussion on Covid…. We are ready for discussion on whatever topic you want…. Question Hour is a right of every member,” Joshi said.

Mahtab said that the government is agreeable to discussion on any topic and the Business Advisory Committee can finalise the subject.

Amid the din, two bills – the Inland Vessels Bill, 2021 and the Essential Defence Services Bill, 2021 – were introduced in the House.

As the uproar continued, Mahtab adjourned the House till 2 pm.

Similar scenes were witnessed when the House met in the morning with the Question Hour barely continuing for 12 minutes, following which Speaker Om Birla adjourned the House till noon.