While a BJP spokesperson distanced himself from Rawal's comments, activists and opposition politicians have condemned his statements. 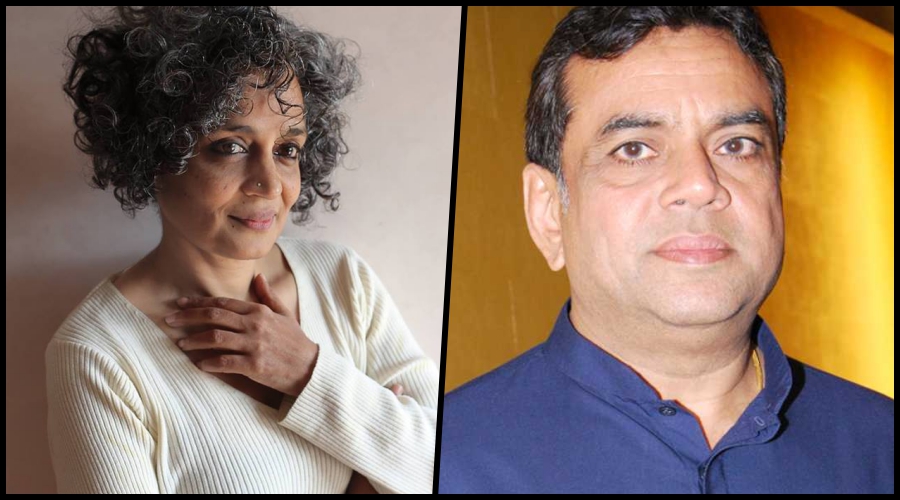 New Delhi:  Even as the army’s court of inquiry is continuing with its examination of whether a group of soldiers broke the law by keeping a Kashmiri man hostage for several hours by tying him to the front of their jeep, BJP Lok Sabha member Paresh Rawal on Sunday tweeted from his Twitter-verified account that the army in Jammu and Kashmir should treat author and activist Arundhati Roy rather the same way.

Shawl maker Farooq Ahmed Dar, 26, was on his way to visit relatives after casting his vote in the Srinagar by-election on April 9, 2017 when an army patrol seized him and tied him to their jeep. They then paraded him around several towns warning bystanders that they would meet the same fate if they threw stones at the security forces. Dar, who was one of only 7% of residents of the constituency to defy the separatist call for a boycott of the election, said he was released several hours later. Though there is no evidence that Dar threw stones – he himself has denied throwing stones and even displayed his voting slip to demonstrate his bona fides –  Rawal, like many other politicians, journalists and social media commentators, has insisted on referring to him as a “stone pelter”.

Not stopping there, Rawal also endorsed a response to his tweet that said similar treatment should be meted out to journalist Sagarika Ghose.

We have a wide variety of choices ! https://t.co/rpciWyhLha

Predictably, Rawal’s tweet promptly incited many of his followers to threaten physical violence against the writer and others. “This is mild … every indian should be violent physically with traitor like arundhati rai who always raise her voice against India,” said one P.K. Pawan.  Others said they would like to stone or even set fire to a jeep if Roy was tied to it. 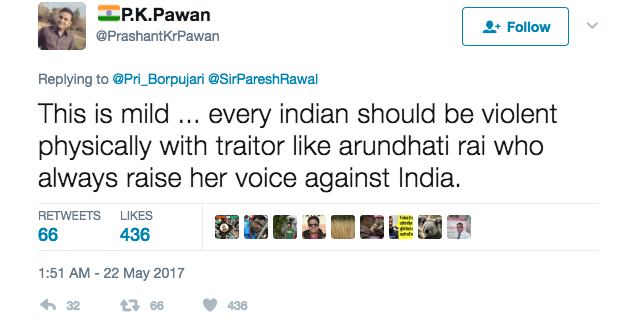 Another Rawal supporter said he would have “dragged her behind my jeep”.

The singer Abhijeet said Roy and others should simply be shot:

While Roy is not on Twitter, Ghose decided sarcasm was the only appropriate response:

Wonderful sir, too good. You really are a model parliamentarian https://t.co/rPjPWRYC3Q

Rawal’s comments inciting violence against Roy and other women have also been widely condemned on the micro-blogging website.

Among those who criticised him was the actor Swara Bhasker:

Wow!!!!!!! A Parliamentarian has the shamelessness to openly threaten a woman and call for a brutal act of violence on Twitter. Disgusting! https://t.co/X7ulMA65CS

Roy is a vocal activist who is known for her strong stance against human rights violations in Jammu and Kashmir. She won the Man Booker Prize in 1997 for her novel The God of Small Things. Her second novel, The Ministry of Utmost Happiness, will be published in June.

Human rights activist Shabnam Hashmi said an FIR against Rawal should be filed immediately. “What he’s done is absolutely obnoxious. In fact I tweeted at the police commissioner, Mumbai police, asking him to take action. I got a response asking me to come and file a case in a police station. I said you should take suo motu action – this is clearly inciting violence against one of our most celebrated writers, internationally known, and a woman,” she told The Wire.

The BJP officially washed its hands of its MP’s tweet. Responding to the controversy, Rawal’s comment had triggered, G.V.L. Narsimha Rao, spokesperson of the party, told The Wire, “Arundhati Roy has been known for anti-India propaganda over Kashmir as she is a compulsive attention seeker. Such people are best ignored rather than being commented upon.”

Communist Party of India leader and women’s rights activist Annie Raja, however, was unforgiving. Terming the tweet “highly condemnable,” she told The Wire that Rawal was the one who has shown the “attention-seeking” side to his personality by attacking Roy on social media without any provocation.

“I may not agree with what Arundhati Roy says but it is noteworthy how the BJP leaders so conveniently attack women who assert themselves, who have positions and opinions on political issues. One must ask Rawal, if he is so concerned about the army’s safety, he should offer himself to the army to be used as a human shield. Why should he suggest someone else’s name. Rawal’s tweet does not deserve a cultured response. It speaks about [his] depraved mind. A man using a woman’s name to get attention,” Raja said.

“The force had to use a human shield. That itself shows the biggest failure of the government in controlling the situation in the Valley. The army’s role is to protect the borders, not to oversee the law and order situation. …The government should allow the army to do their duty to protect the borders and let the police take charge of law and order in the state,” she added.

Congress leader Tom A. Vadakan also told The Wire that Rawal should offer himself up as a human shield before suggesting anyone else’s name. “Have we gone back to that age and time when things do not matter? Rawal’s tweet comes at a time when the Gujarat election is around the corner. I think he is doing a disservice to his party by making such a senseless comment. It is one of Rawal’s scripts which has misfired.”

Asked how he would respond to Punjab chief minister Amarinder Singh justifying the army’s act of using a civilian hostage in the Valley, Vadakan said it was Singh’s personal viewpoint and not the party’s. Singh, in a recent article, praised Major Nitin Gogoi, the officer in charge of tying a civilian to the army jeep, and had said he deserved a “distinguished services medal” for the act.

“I personally believe that human lives should be respected even if it is of a stone pelter. They can be tried by law. Let the judicial process take place and if he is found guilty, let him face punishment. But if the BJP wants to be the overlord and pronounce punishment without any arbitration, we do not know where Indian democracy is headed. Whatever Arundhati Roy’s ideology is, it is going a lot further by calling to tie her around a jeep as a human shield. We are living in a democracy, not in medieval times,” Vadakan said.