In Panjab University, Students Are Struggling Against a Stolen Future

The conflict in Panjab University shows the defining battle is between the young and the old – perhaps why it has failed to see the same solidarity generated by other student protests. 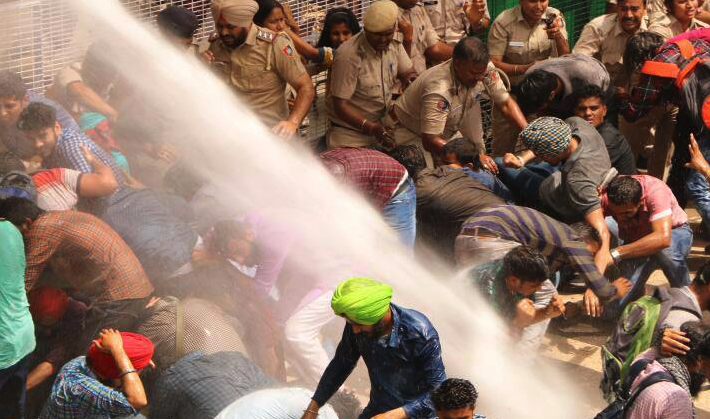 It was the Punjabi stalwart Lala Lajpat Rai who first identified the young as political agents who could prosecute a free future for India. Just over a hundred years ago, Rai published Young India, which declared war on the prevailing system of education, producing as it did passive and pliant subjects for the British Empire. This was a bold move for nationalist politics, which until then had been dominated by professionals, primarily lawyers and occasionally educators, with a smattering of self-appointed spiritualists and notables. Rai was trying to plug into a global sentiment that put more hope in the young to transform the world in the way of the Young Turks in 1908, who had pushed for a revolution in the Ottoman Empire.

Rai’s hero was the much younger, 20-something-year-old fellow Punjabi Lala Har Dayal. Itinerant, intellectual and insurgent, the youthful and charismatic Dayal, in a famous gesture in 1907, had renounced his scholarship at Oxford on the eve of his graduation, leaving imperial spymasters and fogey dons equally shocked. In popular tracts, Dayal pointed out that the Empire’s permanence was guaranteed because education had done the work of pacification.

As an invisible but more effective form of violence, education had replaced the police and the army in not only forging peace in the historically restive Punjab, but had also evacuated any potential for politics. For Dayal, breaking the compact with colonial education was a primary step in political freedom. Not coincidentally, this period also witnessed the zealous deployment of the colonial sedition law that made prisoners out of political actors.

A century later, the latest images from Punjab attest to a confrontation between the state, primarily the police, and the young. Visible in video and photography, a full display of the brute force of lathis, batons and water-canon unleashed on densely gathered and protesting students captures an ambient energy that disrupts the clean-edged Corbusier lines and manicured gardens that have given Panjab University its postcolonial poise. For violence in Punjab’s 20th century has normally been displaced onto the border, and its postcolonial architecture has, above all, signified the potential for progress and peace.

At first sight, the now familiar image of the young Indians confronted and surrounded by state violence in their place of education is of a piece with and replicates scenarios in other Indian universities. This similarity, though striking, is as superficial as it is misleading.

It is much easier to assume that the youth of Punjab has either surrendered itself to a drug-addled alterity in the mode of the perceptive but ultimately unrepresentative film Udta Punjab or is committed to militant and religious bigotry. After all, the Indian intelligentsia and media have deemed that student leadership in places like Jawaharlal Nehru University (JNU) is uniquely qualified to carry the historical and political burden of bringing in the nation’s future.

Since at least last spring, and from JNU – the highly visible epicentre of Indian higher education – to Hyderabad and Jadvapur, student political action has been met with violent suspicion and even been declared seditious by the state. In these scenarios, broader national issues like Kashmir, caste justice and gender violence were acutely distilled.

Mimicking the national in miniature form, students in these central universities agitated, organised and mobilised against the political consensus. Teachers, mentors and sympathisers sought to create a fearless coalition and even gain international attention, however ephemeral.

With force and speed, the ruling powers converted this emergent student politics into an opportunity to redefine nationalism. Shorn of their specificity, all issues of dissent over the course of last year have been reduced to and effectively been equated with questions of loyalty. Proofs of patriotism bludgeoned diverse issues of contention into a national uniformity. As part of the same logic used by the state against them, JNU student leaders in particular became national icons.

The prose of political Punjab

Protests by students in Chandigarh in the last week, however, have a distinctly prosaic political cause. Without a visible name or leader, students are resisting arbitrary governance. In the main they are protesting against the sudden and steep hike in fees, which varies from a 100% to 900% increase depending upon the market value of the course.

Despite affinity with their counterparts elsewhere, the protest and its vivid imagery have struggled to gain national and digital attention. Their protest seems to lack an insurgent immediacy. Unlike what accompanied the protests, especially in JNU, but also Jadavpur and Hyderabad, few gestures of solidarity have been forthcoming from commentators and clickactivists, whether in national or international campuses, let alone Panjab University’s complete absence from all-too influential television studio debates.

Sedition was invoked and immediately dropped against protesting students at Panjab University. This certainly does not mean the end of state violence. In their statements, students ‘remanded to judicial custody’ have testified to forms of abuse that are horrifically brutal but familiar.

Incarcerated students used their ‘judicial custody’ as an occasion to bear witness to state violence that also mimicked the national register of non-state oppression ranging from caste abuse, gender violence to lynching. The 40-odd imprisoned students have documented this brutality primarily on their own, as neither their seniors nor a sympathetic global citizenry has come forward to lend them solidarity.

Yet the charge of sedition was dropped overnight against protesting Panjab University students. Why was that? Were the JNU student leaders properly seditious because they invoked Kashmir and as a result are paradoxically free, out and about but fighting the byzantine logic of the Indian courts? Like so many Indians accused of sedition in colonial times, has this allowed them to be dignified as heroic dissidents against the state? The indifference of the nationally- and globally-inclined Indian intellectual to the events in Punjab betrays a significant lack of judgment.

A strategic sense of survival, on the other hand, prevailed over political elites. Perhaps they recognised that to charge the protesting students of Punjab University with sedition was tempting fate. After all, it was only two decades ago that the youth of Punjab had been seriously dangerous, properly violent and intentionally seditious.

Sedition in Punjab summons barely forgotten images of another politics of the young dated by the year 1984 or the word ghallughara. A postcolonial Punjabi politics of seditious militancy effectively brought the Indian state to its knees, including the desecration of a sacred shrine, the assassination of the original model of a strong prime minister and the pogroms of 1984. No cosmopolitan march, clickactivism or compulsive digital act can conjure, let alone compete with, that violent deathscape which effectively remade postcolonial India.

Fear of the future

While protestors at JNU have been comforted by the support of their teachers, seniors and solidarity from international supporters, Punjab today is caught up in a fight between generations, and its student protestors do not simply mirror the identity politics of the national arena in miniature.

Faced with a ‘financial crisis’, Panjab University has decided to literally pass the buck and debt onto those who are most unlikely to be able to bear it. This is not even a mortgage that would guarantee ownership but a theft of the future by the old. The young have been frog-marched into paying for the greed and laziness of the old.

High fees matched by zero job prospects and deathly competition is the future for the young. And the students’ immediate mentors and teachers in Panjab University (unlike JNU) are at best indifferent and at worst hostile to them. This is quite apart from the fact that the students are set to receive mediocre to poor or no education. Aware of it all, the young at least in Panjab University are now justifiably protesting against this shameless robbery of their future. If for Rai, the young were a promissory note to a free political future, the young today have been spoken for and deprived of their future.

The rest of the country, however, is in the heady throes of weaponising identity, whether to square the historical injustices of caste or express majoritarian machismo against minorities and primarily Muslims. Having literally and violently done so not once but twice in the last 70-odd years, the young in Punjab are today far more mundane in their political demands. And this is what perversely writes the young of Punjab into the national script.

India, as we are tirelessly told, is the global future since it is dominated by the ‘young’ and houses the single largest proportion and gross number of under-30s on the planet. India’s young are its ‘demographic dividend’, the bailout mechanism for the old, a potential new market and the clear electoral horizon for any political party aiming to rule. A lot is riding on the young. And in Punjab, once more, the young are seeking to define the future.

Unlike the current identity-fixated politics of the rest of the country, the conflict in Punjab’s premier university shows the defining battle is between the young and the old. This might convey a deceptively prosaic agenda that leaves commentators cold. It might attract no international interest. Yet being ignored nationally and globally might just offer students the luxury of political reflection. Punjab might portray itself as parochial, but despite (and perhaps because of) this it will prove once again to be politically instructive and categorically consequential for the future of India.

Shruti Kapila teaches modern indian history and global political thought at the University of Cambridge. She tweets at @shrutikapila.

A shorter version of this article appeared in print in The Tribune.