Starting from the Congress, which said it would reimburse the Indian Railways for costs it incurred, the Union government came under fire from various quarters for charging migrants workers travel fare to reach home. 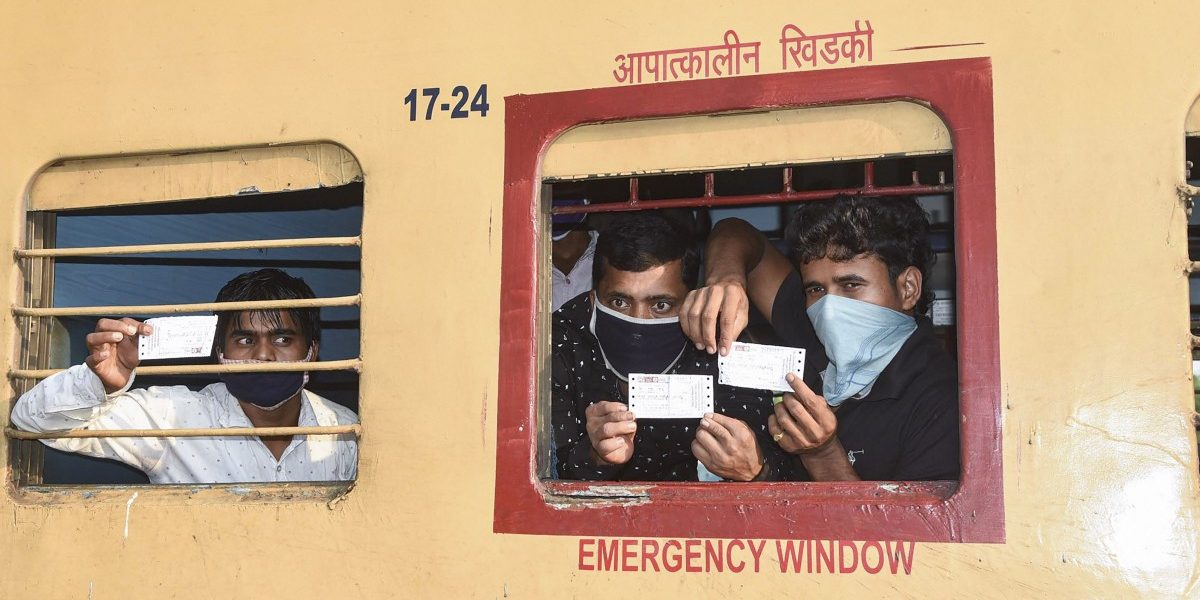 Stranded migrants arrive at Danapur railway station from Kerala amid the ongoing coronavirus crisis, in Patna, May 4, 2020. Photo: PTI

Note: The story, originally published on May 4, has been updated and republished to reflect the fact that railway fares will, in fact, be charged for migrants’ passage.

New Delhi: In a firefighting exercise aimed at tamping down criticism from the opposition and other quarters about the fare indigent migrants are being charged to return to their homes by train, the Modi government on Monday claimed that the Railways was bearing 85% of the travel cost charged from the migrant workers, while the state governments would pay 15% of the total value of the train fare.

The claim was made by Union health ministry joint secretary Lav Agarwal but no official notification in this regard has been released yet, which means that migrant workers boarding special trains will still be handed tickets at the railway stations. Given what Agarwal had indicated, the state governments are expected to pay back the rail fare to the Indian Railways in due course.

While the state governments can now decide whether to recover the ticket fare from the migrant workers or pay from its own pocket, it is clear that the Centre, despite criticism, is not willing to make travel for migrant workers free.

Also read: Centre’s ‘Clarification’ on Who Can Go Back Home Leads to Even Less Clarity

On Monday, upon being asked whether migrant workers were being charged for being ferried home, Agarwal had said the lockdown measures had asked people to stay wherever they were but based on the requests from the states, “permission was given to run special trains.”

“Be it the government of India or the Railways, we have not talked about charging from workers. 85% of the transportation cost is borne by the Railways, while states have to bear 15 percent of the cost,” he told reporters.

The cost that the Centre claims to be bearing is actually being borne through “subsidy”.

The final ticket cost – which is higher than the usual fare after the Railways decided to impose a “corona surcharge” – has been calculated only after factoring in the subsidy, which means Agarwal’s claim is more wordplay to mislead the public than indicative of any concrete relief to the migrants.

However, even this explanation on the ‘breakdown’ of rail fare came only after the Congress and the Communist Party of India (Marxist), followed by many other opposition leaders, ran a persistent campaign against it.

Even as the Modi government’s decision to run special trains for migrant workers was welcomed by all, its decision to charge the distressed workers for the travel received much flak.

The nationwide lockdown measures had already stripped most migrant workers of work and proper shelter, forcing them to take long journeys on foot or illegal travel. In their quest to return to their villages, multiple reports pointed out their struggles and agitations across the country. Some have even died making these journeys.

In such a situation, the government’s decision to levy a charge for the journey home was evidently seen as insensitive by many, especially after it had arranged free air travel to bring back stranded tourists from foreign countries in the early days of the COVID-19 crisis. The move was perceived as particularly offensive to the workers as the Centre also decided to sell the tickets at an escalated fare, which includes the normal fare plus a surcharge of Rs 50 per person.

Karnataka Congress chief D.K. Shivakumar, on Sunday, stunned the BJP-led state government when he declared that his party unit would pay for the bus travel of all migrants who are being ferried back to their villages. “The Karnataka government should take complete responsibility and bear the full costs of travel of all migrant workers who belong to Karnataka. It is a shame they are asked to pay for travel and food. We will be compelled to protest against the government if poor people are troubled,” he tweeted.

Later, he gave a Rs 1 crore cheque to the Karnataka State Road Transport Corporation (KSRTC) on behalf of the Karnataka Congress unit.

The spark that came from Karnataka Congress spilled over to the national level soon enough.

On Monday, the Congress’s national president, Sonia Gandhi, stepped up and declared that her party was ready to reimburse the Indian Railways for costs it incurred in transporting migrant workers home. Former party president Rahul Gandhi also pitched in. “On one hand, the Railways is extorting ticket fare from labourers stranded in different states, on the other hand the Rail Ministry is depositing donations of Rs 151 crore in PM Cares fund,” he said.

At the same time, the CPI(M) ran an aggressive political campaign against the Modi government on the matter.

Stop the lies, the spin, passing the buck to the state Govts!
Central Govt needs to own up to its responsibilities and use the #PMCares Funds to bring workers home free. pic.twitter.com/86QuwJw3ks

Migrants Workers under #Lockdown for more than 40 days, have exhausted all their funds. Yet the Govt charges them for train fares to take them back home.
This is not just unjust but outright cruelty! pic.twitter.com/Rhcb7esLqR

More opposition leaders soon registered their presence. Samajwadi Party chief Akhilesh Yadav slammed the BJP government for charging workers who have already been pushed to the wall during the lockdown. “Migrants travelling back home being asked to pay for the train rides by the BJP government is highly shameful. It has become clear today that the ruling government waives loans for capitalists and businessmen and supports the rich. It works against those who are poor. At the time of crisis, exploitation is done by money-lenders not by the government,” he tweeted.

Jharkhand chief minister Hemant Soren also urged the Centre to reconsider its decision. “This is really sad. They (migrant workers) are in any case distressed. If the Centre does not, then the Jharkhand government will look for ways to make this payment but we will certainly not ask the migrants to pay,” he said.

Similarly, Rashtriya Janata Dal’s Tejashwi Yadav also attacked both the Nitish Kumar-led state government and the Centre on the issue. He mooted that if the state government is incapable of making travel costs for migrants free, then his party is ready to foot the bill.

Over the last few weeks, the Modi government has come under fire form the opposition for failing to address the plight of workers rendered jobless and even homeless because of the sudden lockdown. For more than two weeks now, the Congress party has been demanding that the Centre should arrange travel facilities for the stranded migrant workers, if it decides to extend the lockdown. On Friday, the Union government allowed the movement of workers and asked the Railways to run special trains based on the requests of the states. However, its indecisiveness came to the fore when a day later it looked to narrow down the scope of the travel permit.

Union home secretary Ajay Bhalla, on May 3, wrote to the chief secretaries of all states that only those workers who are stranded somewhere between their workplaces and home would be allowed to board the special trains, creating further confusion.

The confusion reflected in Agarwal’s answers on Monday when he said that everyone is expected to stay wherever they were when the lockdown was announced. However, thousands of workers have been making the trip back to their villages because they have earned nothing over the last two months. The opposition has been demanding a more empathetic approach from the Centre, and has persistently pointed out that the harsh lockdown can lead to greater human and economic strain than what is being currently felt.

The role of the opposition has led the Centre to reconsider some of its decisions, arranging special trains for workers being one. The measures it has taken in its plan to phase down the curfew also reflect some of the suggestions the opposition parties have been making.

Note: The story, originally published on May 4, has been updated and republished to reflect the fact that railway fares will, in fact, be charged for migrants’ passage.