What is also striking about the report is that Inquilab’s reporter does not quote any sources while making claims. 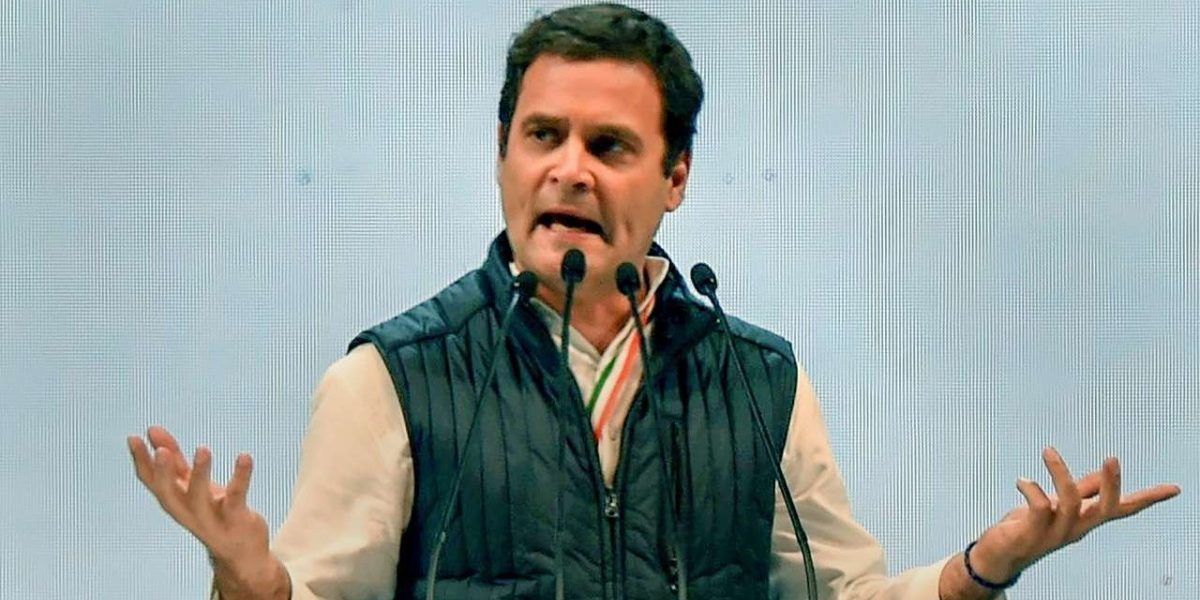 New Delhi: On July 11, a delegation of ‘Muslim intellectuals’ met Congress President Rahul Gandhi at his residence in Delhi. According to advocate Z.K. Faizan, a member of the delegation, it was an informal meeting with no set agenda. “A day before the meeting, I received an invitation from Nadeem Javed, chairman of the All India Congress Committee’s minority department, to be present at the meeting,” said Faizan, talking to The Wire on the phone. “It was an informal meeting and lasted for about two hours. We discussed issues that were concerning Indian Muslims.”

The meeting has been described by the Bharatiya Janata Party as an example of the Congress’s “appeasement of minorities” politics with the BJP spokespersons including ministers making much of an account in the Urdu daily, Inquilab, which quoted Rahul Gandhi as saying, “Yes, the Congress is a party of Muslims”. Relying on this report, which the Congress has refuted, Prime Minister Narendra Modi also attacked the Congress at a rally in Uttar Pradesh last week.

The Wire spoke to several participants of the meeting who all denied Rahul Gandhi said what the Inquilab and the BJP now accuse him of saying. One of the participants said Gandhi’s actual comments were as follows:

Comment by one of the participants: For decades the Congress was the natural secular political option for Muslim minorities, but things have changed. Now there are many regional parties. Minorities vote locally.

So how did a straightforward exchange morph into a huge political controversy? On what basis did the Inquilab report what it had?

This is how the Indian Express reported the meeting the day after it happened: “Congress chief Rahul Gandhi on Wednesday met a group of intellectuals from the Muslim community in a rare informal interaction”. According to the report,

Sources said some of them raised “stereotypical” issues like the stand of the All India Muslim Personal Law Board on various issues, issues related to the Aligarh Muslim University and Urdu language. Rahul wanted to know what issues the Congress should raise when it goes to the people.

At least one member, historian Syed Irfan Habib, is learnt to have told him that the Congress should raise issues which are of concern to all the people of India and not just Muslims. He said the Congress should talk about policies, employment, the atmosphere of fear and insecurity in which the people are living in. He stressed that not only the Muslims, Dalits too are facing similar problems.

However, according to Inquilab, a newspaper owned and published by the Dainik Jagran group, the Congress president had said the Congress is a party of Muslims. “Haan, Congress Musalmanon Ki Party hai,” reads the banner headline of the newspaper.

Quoting Inquilab’s report, or headline, to be precise, defence minister Nirmala Sitharaman told reporters during a press conference that, “The Congress party is playing a dangerous game, playing communal division, playing up the card of religion. It is frightening that it may lead to the kind of division and kind of communal disharmony that prevailed during the 1947 Partition. Congress party shall be solely responsible if any disharmony plays out between now and the 2019 elections.”

As per the report filed by Mumtaz Alam Rizvi, Rahul Gandhi, while rejecting the allegation of Muslim ‘appeasement’, said in the meeting:, “Haan, Congress party Musalmaon ki party hai kyunki mulk ka Musalman kamzor hai aur Congress hamesha se kamzoron ke sath rahi hai. (Yes, the Congress party is a party of Muslims because the Muslims of our country are weak. And Congress has always been with the weaker section).”

The report then goes on to describe who said what at the meeting and talked about four invitees – educationist Ilyas Malik, social activist Farah Naqvi, professor S. Irfan Habib and advocate Z.K. Faizan – who were a part of it. Interestingly, the statement that made the headline and which has subsequently received everybody’s attention, including that of Prime Minister Narendra Modi, is not attributed to anyone. What is also striking about the report is that, unlike the Indian Express, Inquilab’s reporter does not quote any sources. His story has been written as if the reporter was present at the meeting. The Wire tried to contact the reporter but he could not be reached for comment. However, Yameen Ansari, the resident editor of the newspaper, who spoke on the phone to The Wire, confirmed that Mumtaz had not been present. “But we stand by the story. The problem is not with our story but its translation,” he insisted.

According to Ansari, the English translation of the newspaper’s headline in a tweet by senior journalist and editor-in-chief of Nai Duniya was misleading.

Urdu daily Inqalab has quoted Rahul Gandhi saying “Yes Congress is a Muslim party”. Is the quote correct or party will contradict it?
Muslims don’t want a Muslim party, they want a National Secular party, which doesn’t discriminate between citizens. @RahulGandhi @INCIndia pic.twitter.com/ZBwJ8qGcou

Leaving aside the fact that Siddiqui’s translation of Inquilab’s headline cannot be described as incorrect, the newspaper itself, curiously, makes no mention of any sources in the story except it its last sentence, which reads, “Zaray ke mutabiq Rahul Gandhi bahut jald kuchh Muslim danishwaron se mulaqat karenge (According to sources Rahul Gandhi will be meeting Muslim intellectuals soon).”

Moreover, three (Malik, Naqvi and Habib) of the four people whose statements are a part of the story have confirmed to The Wire that they have not spoken to the reporter about the meeting at all. The only person who has confirmed speaking to him is Faizan. However, even Faizan has clarified that Rahul Gandhi never said “Haan, Congress Musalmanon ki party hai”. “I did speak to the reporter over the phone and as far as my statement is concerned, it is correct,” Faizan confirmed to The Wire, adding, however, that “Rahul Gandhi has been quoted out of context. He never said anything even close to Congress being a party of the Muslims.” Malik, Naqvi and Habib said the same thing.

According to Habib, there were dozens of media persons waiting outside the residence of Congress president. “I only spoke to the Indian Express and their reporting is the most accurate. Even the Hindu got it wrong because they were factually incorrect in reporting that professor Zoya Hasan was also a part of the delegation,” Irfan told The Wire. Recognising the error, the Hindu later corrected its story and put an apology at the end of the online version: “This article earlier mentioned Prof Zoya Hassan met Congress president Rahul Gandhi. She didn’t meet him. The error is regretted.”

However, nothing of this kind has been done by Inquilab. In fact, it published a front-page story on July 16 by the same reporter claiming that there was nothing wrong with its reporting. This time around, in order to ‘substantiate’ his report, the reporter attributed it to the organiser of the delegation and chairman, All India Congress Committee’s minority department, Nadeem Javed. “Inquilab Ki Khabar Ko Congress Ne Sach Mana: Musalmanon Ke Talluq Se Rahul Gandhi Ne Kuchh Ghalat Nahi Kaha,” read the banner headline of the newspaper (which means ‘Congress Accepts Inquilab’s Report About Rahul Gandhi’s Statement Regarding Muslims’). Attributing it to Javed, the report stated , “…Rahul Gandhi ne na koi ghalat Baat kahi hai aur na hi Inquilab ne koi ghalat baat likhi hai (Neither did Rahul Gandhi say anything wrong nor did Inquilab report anything wrong)”. This is in complete contrast to what the Congress leader and national spokesperson Priyanka Chaturvedi had to say earlier. In a tweet replying to the journalist-politician Shahid Siddiqui, she said, “This is an absolute lie & a shameful spin by the newspaper. The BJP, using it to further its own agenda, yet again exposes its desperate tactic to mislead the nation. However, this will not deter us to fight for India’s founding principles & its democratic values.”

This is absolute lies&shameful spin by the newspaper. The BJP using it to further its own agenda, yet again, exposes their desperate tactics to mislead the nation. However this will not deter us to fight for India’s founding principles& its democratic values. https://t.co/EN15vL7oNa

News agency ANI quoted senior Congress leader Anand Sharma as saying, “Calling the party a ‘Muslim party’ is not befitting of a PM. He has less knowledge of history.”

PM is for entire India & not only BJP. His main political rival, Congress party has led nationalist movements & struggle for freedom. Calling the party a ‘Muslim party’ is not befitting of a PM. He has less knowledge of history. He writes his own history: Anand Sharma, Congress pic.twitter.com/RIOflDmScF

The Wire tried to contact Javed but he was not available for comment. However, Javed told NDTV, “It is unfortunate that one Urdu newspaper wrote this – no one else – and the prime minister picked it up.”

Meanwhile, daily Inquilab is in self-congratulatory mode, “Allah ke karam se guzashta panch roz se Inquilab Hindustan bhar ke news chainalon ki shah surkhi bana hua hai halanki hum ne na to koi aisi koshish ki thi…(By the grace of Allah, for the last five days, Inquilab has been in the headlines of news channels across the country though we never tried for it)”, read the opening lines of the article published on in the newspaper on July 17, written by its editor (North India), Shakeel Shamsi.