'No Vote To BJP': A People’s Campaign in Bengal Reaches Remote Villages

Students, young people, teachers, doctors and social activists are joining the forum voluntarily and campaigning for the cause.

'No Vote to BJP' campaigners. Photo: Facebook/No Vote To BJP

Kolkata: Amidst a high-voltage political campaign by the ruling Trinamool Congress (TMC) and principal challenger Bharatiya Janata Party (BJP), West Bengal is witnessing a new phenomenon – a political campaign led by common people, which is reaching the farthest corners of the state. The campaign is named “No Vote To BJP”.

A group of people connected to various social and mass movements came together back in November 2020, which led to the formation of a forum called “Bengal against Fascist RSS-BJP”.

Kushal Debnath, one of the convenors of the forum, told The Wire that the BJP is desperate to win Bengal, as the state has always opposed and rejected the Sang parivar’s idea of Hindutva. “Stopping the BJP from coming into power in Bengal is extremely crucial today, otherwise their fascist aggression will gain steam across India.”

Debnath explained that since the 2019 parliamentary elections, BJP had unleashed an onslaught on secularism and Indian’s federal structure, sweeping attacks on the rights of minorities, systemic subversion of independent institutions and silencing of dissent.

“We have seen the sufferings of migrant workers, we have seen how black (CAA, farm) laws are being passed in parliament using brute force. We have seen how the government is muzzling dissent and putting civil society behind bars. We are witnessing attacks on Muslims and Dalits. This is the time for us to come forward with all our means to defeat them electorally; hence, we are urging people of the state not to vote for the BJP in the coming assembly poll,” said Debnath.

Debnath explained that through this campaign, they are not asking people to vote for the TMC or any other political party, but requesting people to not vote for BJP. “We are asking people to reject the BJP and vote for any other party. I am not a TMC supporter. I was in jail for five months when the state government slapped the Unlawful Activities (Prevention) Act (UAPA) on me, I am out on bail. Our message is clear, vote for anyone but not the BJP,” said Debnath.

The forum has 48 convenors operating from Kolkata. A 30-member district body was formed in each of the 16 districts spread across the state, which are taking the campaign to the remotest villages. 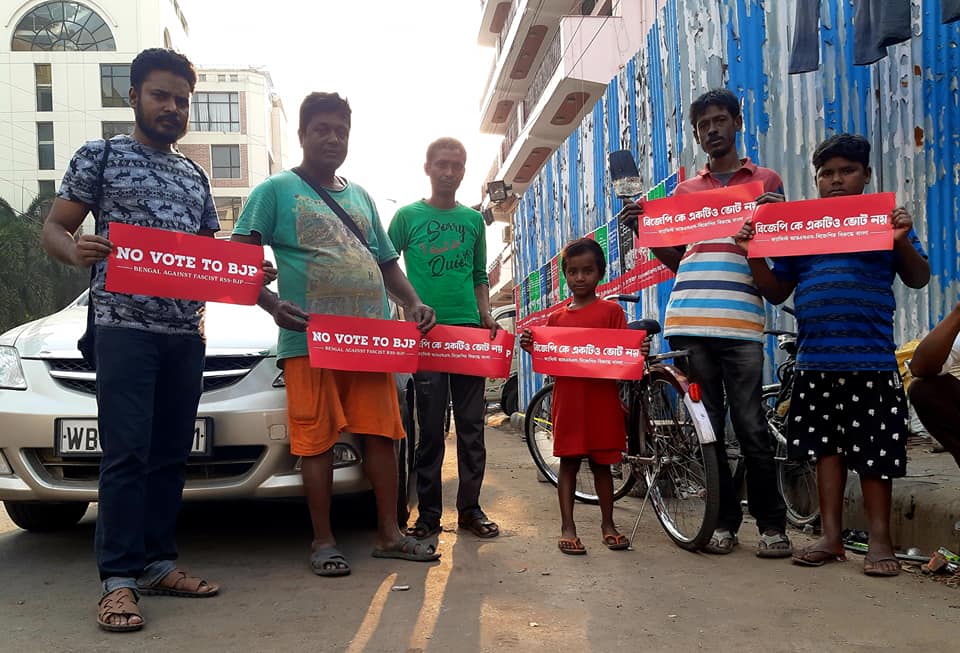 “We are getting support from people cutting across various socio-economic strata. People associated with cinema, music, theatre, academia, all are joining the movement as they believe this is essential. People are joining from different political backgrounds, but here they are not representing their party ideology. Here they are joining as individuals who genuinely believe that the BJP must not come to power in Bengal,” Dwaipayan Banerjee, a member associated with the forum, said.

When asked about the funding, Banerjee said, “Our requirement is very small. Most of our expenses go into printing posters, leaflets and hiring vans/electric rickshaws for local campaigning. People are contributing according to their means. Like, for example, a senior doctor in the city gave Rs one lakh when we started off. Also, many of us are involved in various social and political movements, so leveraging those networks to raise funds. It’s not difficult at all.”

Filmmaker and photographer Ronny Sen said, “In the American election, Bernie (Sanders) fought with (Joe) Biden, but in the end he supported Biden to oust (Donald) Trump. BLM [the Black Lives Matter movement] also extended its support and people rallied together so that Trump loses; the mandate of this tactical unity was directed towards Trump’s defeat. Similar things are happening in Bengal. There is a sizeable force that doesn’t want BJP’s communal politics in Bengal and will support any party who can keep them out of power. In the larger context, this is Bengal’s gift to Indian electoral politics because ‘No Vote To BJP’ is a viable campaign which can unite all secular, democratic forces in different assembly elections across India.” 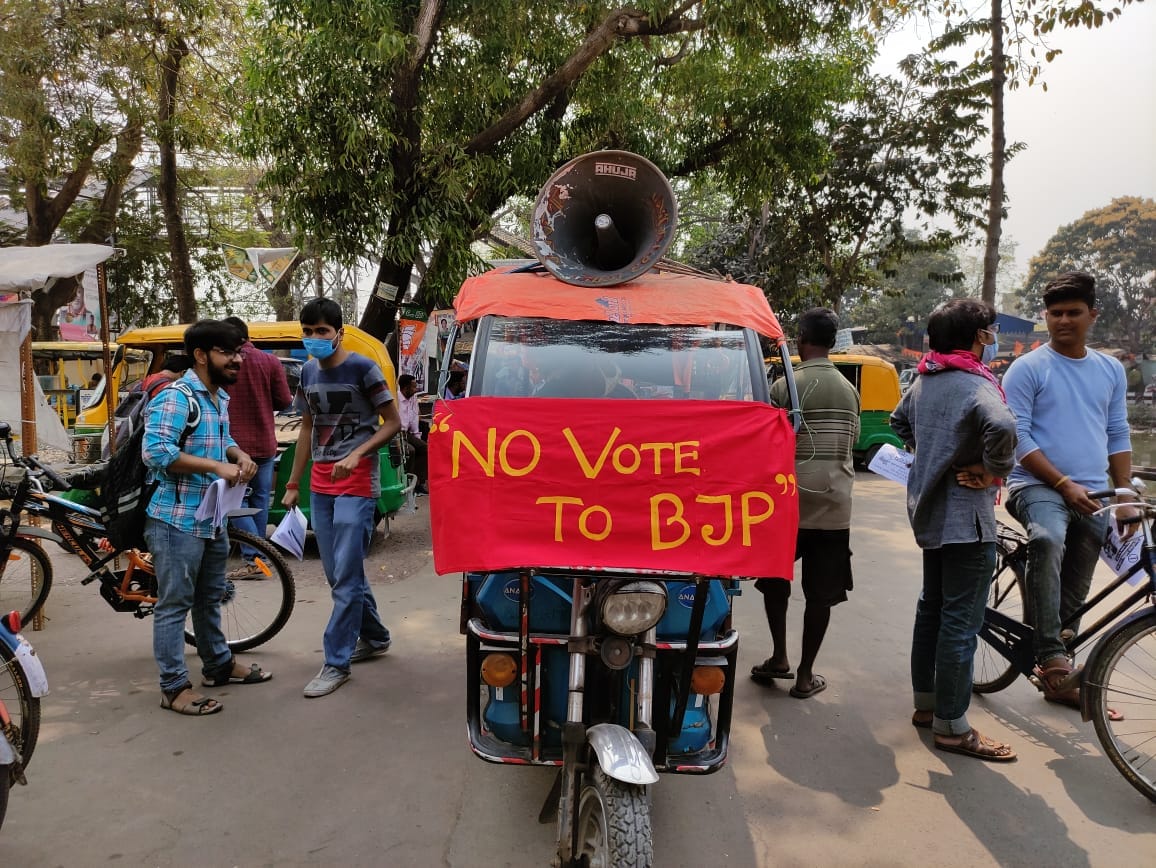 A filmmaker who doesn’t want to be named told The Wire, “We stand at a critical juncture in our history. This election is a make-or-break election for many reasons. The results will either act as a roadblock for the fascist Central government or clear the deck for the brute majoritarian ideal of a Hindu rashtra. We therefore make this impassioned appeal to the citizens of Bengal to reject BJP.”

The forum has reached various towns and villages where the members are organising street corner meetings, performing street plays, putting up posters and distributing pamphlets.

“Our campaign minces no words in its attack on the BJP-RSS, exposing their every move as inimical to the interests of our people. It makes no irresponsible comparisons of the fascist party BJP with other parties in the fray. It aims to convince people, in particular those who have swung towards the BJP in the recent past, that this time they should not make a mistake again. The response from the people gives us hope that Bengal won’t yield to fascist rule,” Kasturi Basu, another convenor of the forum, said. 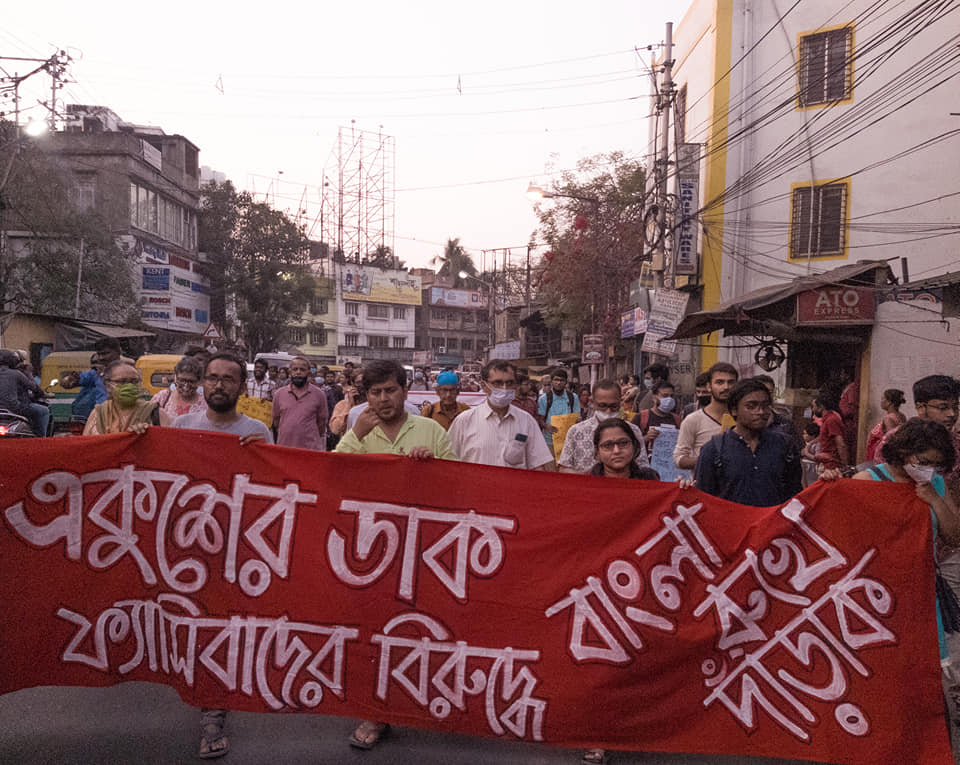 On Friday, the forum organised a rally of a few hundred from Jadavpur to Garia to amplify their campaign. A bigger rally has been scheduled for March 10, where people from various districts will take part to give one clarion call – No Vote To BJP. The March 10 rally will start from Moulali of central Kolkata and conclude in Esplanade, followed by a public meeting.

The forum has set up a social media team which is running an intense online campaign parallel to the street campaign. The ‘No Vote To BJP’ Facebook group has over 18,000 members and another page with the same name is followed by close to 1,900 people.

The members associated with the forum have allegedly received threatening and malicious calls from RSS and BJP members, as the campaign has irked them. The members say they were also attacked by CPI(M) cadres.

“We have got nasty phone calls from the RSS, for naming and shaming them openly in our campaign. We are happy to have disturbed the enemies of the people. The most unfortunate response has come from the CPI(M), though. While its leadership has been silent and kept a distance from us, the cadre of the CPI(M) have been relentlessly attacking our campaign – a curious phenomenon indeed. Looks like the CPI(M) doesn’t want us to up the ante against the BJP as much as they are vocal against the TMC. A repeat of their 2019 strategy,” said Basu.